Continue to The Hollywood Reporter SKIP AD
You will be redirected back to your article in seconds
Skip to main content
October 8, 2016 4:42pm
Logo text

Who will Negan (Jeffrey Dean Morgan) kill? The answer, quite possibly, is everybody, given time. More pressingly, who is Negan about to kill? That’s the question posed in the season six finale of The Walking Dead, and with season seven premiering on Oct. 23, fans are about to learn the bloody answer.

Of course, that question was not answered during the Walking Dead panel at New York Comic-Con… but it sure looks like we know who is going to lose a hand, based on a preview of season seven shown at the end of the panel. (Spoilers for the season seven premiere ahead.)

The scene takes place immediately following Negan claiming the life of one of the Alexandrians, the identity not revealed. Here’s one person who won’t be meeting Lucille: Rick Grimes (Andrew Lincoln), who remains on his knees, trembling at what he saw… but not so scared that he doesn’t talk some trash.

Negan smiles, his Cheshire cat grin wide on his face. He calls for Simon (Steven Ogg), and asks what the Saviors found on Rick when they captured him. “A hatchet,” Simon replies from off-screen. This makes Negan smile more, as he speaks about Simon as his right-hand man, and stresses the importance of having a right hand.

With that, Negan rips Rick off the ground and drags him into the nearby RV, promising that they’ll be right back. The camera slowly pans to show the gore of whoever it was who got their brains smashed in by Negan, the person’s identity still unknown.

Assuming it’s not just a bait-and-switch, Negan threatening (and potentially following through) to remove Rick’s hand is a massive remix of a moment from the comics. In Robert Kirkman’s source material, the Governor famously cleaves Rick’s hand during their first meeting. The show has thus far shied away from that twist, but it looks like a friend isn’t the only thing Rick is going to lose in the season premiere. 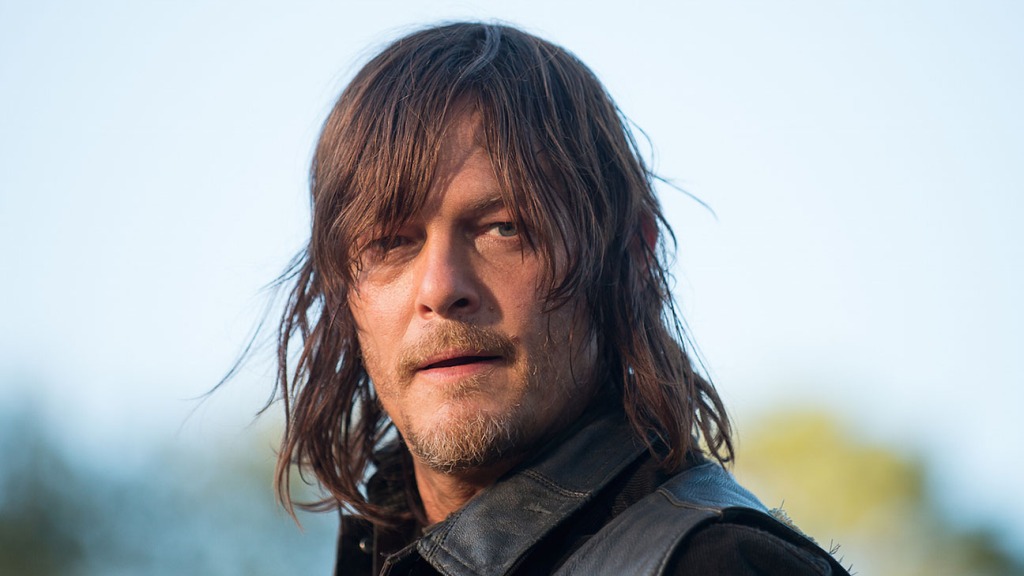 The panel began after a long techno music filled delay, with moderator and Talking Dead host Chris Hardwick announcing that he was celebrating the 13th anniversary of his decision to quit drinking alcohol. “If you’re on the fence, you can turn your life around,” he told an appreciative crowd.

From there, things took a turn for the Dead, with Hardwick asking Gimple the big question: “Will we find out who Lucille lands on in the season premiere?”

“In putting together these episodes, I’m saying that this season … the performances this year are astounding. The actors this year are the star of the show,” Gimple continued. “Be on the lookout for some amazing performances, some really unbelievable creepy, strange, weird walkers.”

Hurd says the world of the show expands in a massive way in season seven: “It really is a larger world. There are new worlds we’re going to be exploring, obviously Ezekiel (Khary Payton) and Shiva being two of them. Even though the show has been a big show, it’s essentially been contained. We had the Atlanta season, the farm season, the prison, Woodbury, you name it. Now, we have a Walking Dead universe thanks to Mr. Kirkman.”

Hardwick asked Reedus, who read a bizarre letter out loud written by the missing Andrew Lincoln (Rick), if keeping things light is how the cast survives the bleak subject matter of Walking Dead. “It gets pretty heavy, so we goof around on set as much as we can,” Reedus said, before giving an example of just how heavy the show gets.

“‘We’re all going to die,'” he said of what was on Daryl’s mind at the end of season six. “It’s a weird feeling to be that powerless, and put on our knees, and it doesn’t look like we’re getting over the wall. It’s a terrible feeling. I hated shooting those scenes. It was terrible. It sucked. It really did.” 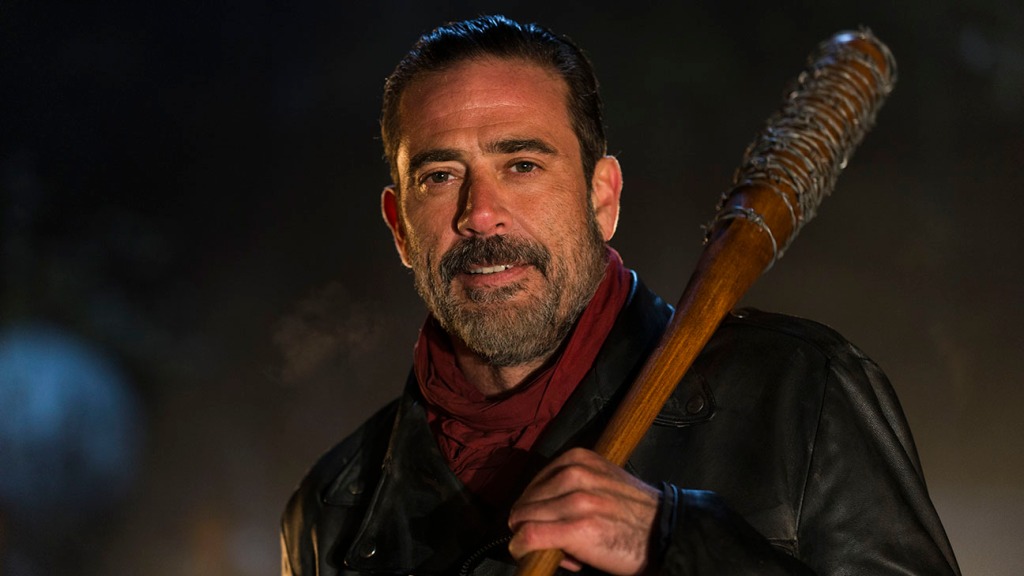 On the threat level of Negan, Alpert said, “He’s one of the best comic book villains of all time. Negan really is a sign of the new world. They thought they could take him, they thought they were the baddest people out there, and they run into someone who is bigger, stronger, more organized and better equipped. They’re outnumbered and outgunned. Negan wields that power in a way that seems perfectly suited for the apocalypse.”

“The Governor was small potatoes compared to this guy,” said Gurira. “He doesn’t have one town of Woodbury. He has outposts in various places we don’t even know about yet. He’s also extremely smart. It’s becoming more and more evident how smart he is, with how he gets Rick on his knees.”

Turning toward Negan himself, Morgan was asked if this character is unlike anything he’s experienced. “It’s not even close,” he said. “The show hasn’t even aired yet. There was 13 minutes last year. But this, and what’s about to happen? It’s already nuts, and we haven’t even started the year yet.”

“In order to approach a character like Negan and have somewhere to go, you have to believe in what you’re doing and what he’s doing as essentially the same thing these guys have been doing for the past seven years. He just so happens to carry a baseball bat that he loves dearly,” Morgan continued, describing how he accesses Negan. “He absolutely thinks he’s right. He’s also a bit of a showman. This world is his stage and he owns it. You can call it cocky, but we watched Rick and these guys get cocky in the last seven years, especially last year. Negan coming in and flexing his justice on these people is his way of letting them know they were wrong, and it’s time to go down a notch or ten.” 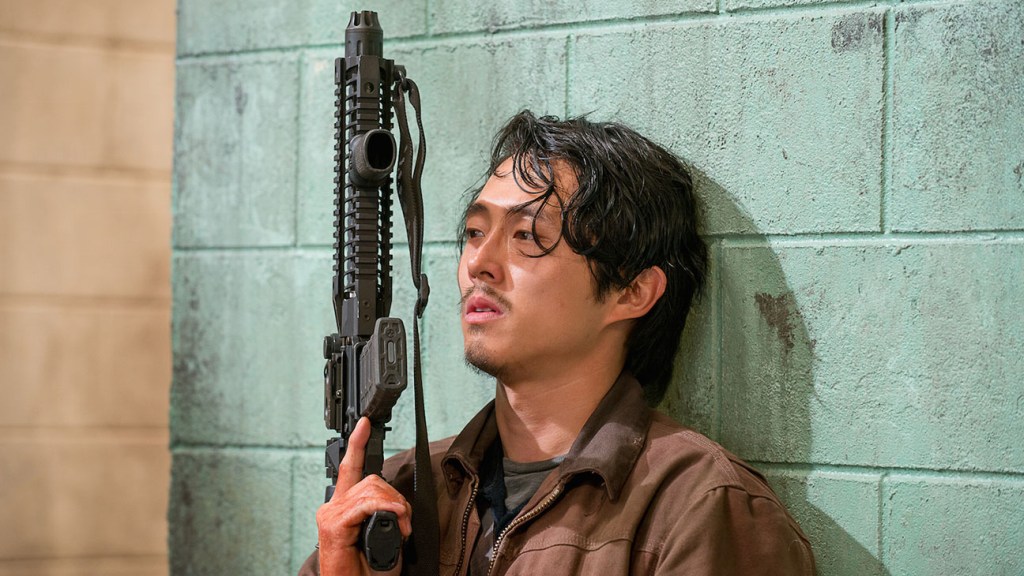 Moving away from Negan — or as far away as one can get at the moment — conversation turned toward Glenn and Maggie’s relationship. Is a relationship in this world an asset or a liability, Hardwick asked?

“Glenn and Maggie, they’re classic,” said Yeun. “It’s interesting. Traditionally, when you look at the circumstances, you can argue that having someone is a danger. What Glenn and Maggie have is when they’re kind of together, they’re better and greater. You see the strength in Maggie and the strength in Glenn. You see the leaps and bounds they’re willing to traverse together. Personally, for me, I think they’re badass together.”

The theme of romance continued, focusing on Sasha and Abraham. “He’s a warrior,” Martin-Green said of Sasha’s interest in Abraham, before proceeding to have some hair malfunctions. “I see it as seeing across to him and seeing who I just was. I just came from the place of complete defense-driven behavior, where all I’m trying to do is survive by hiding behind battle. I was brought out of that by Bob, and I was always brought out of it by Tyreese, but I saw myself in [Abraham], and I knew the potential of where he could be, so I decided to reach out and engage and connect with him and lend him that hand I was lended by Tyreese and Bob. It’s a beautiful circle — the circle of life — that happened. It’s something I lost in the men of my life that I passed onto him.”

Speaking about a warrior who previously abandoned his lethal ways, James discussed the upcoming evolution of Morgan, now that he’s killed again for the first time in a while: “The path he’s walking is a path he’s trying to walk. He’s not Eastman. He’s not locked away in a shed with a goat. The thing about it is, when he shoots that Savior in order to save Carol, I think one bullet would have done it… but he emptied the clip. Those people begging for Morgan to become a killer again? Be careful what you wish for.”

As for Carol’s turn away from violence, after receiving a huge extended amount of applause, McBride previewed: “Every step she’s taken up to this moment has devastated to her this point. She just needs to get her head together and understand … to have some sense of how what we have to do is so monstrous in order to survive, and we’re becoming the monsters that we’re trying to protect ourselves from. She needs to come to terms with it. If you want to survive, to what end? What is it about this world that makes you want to survive so much? That’s a big question. It’s a cool question. I love that question.” 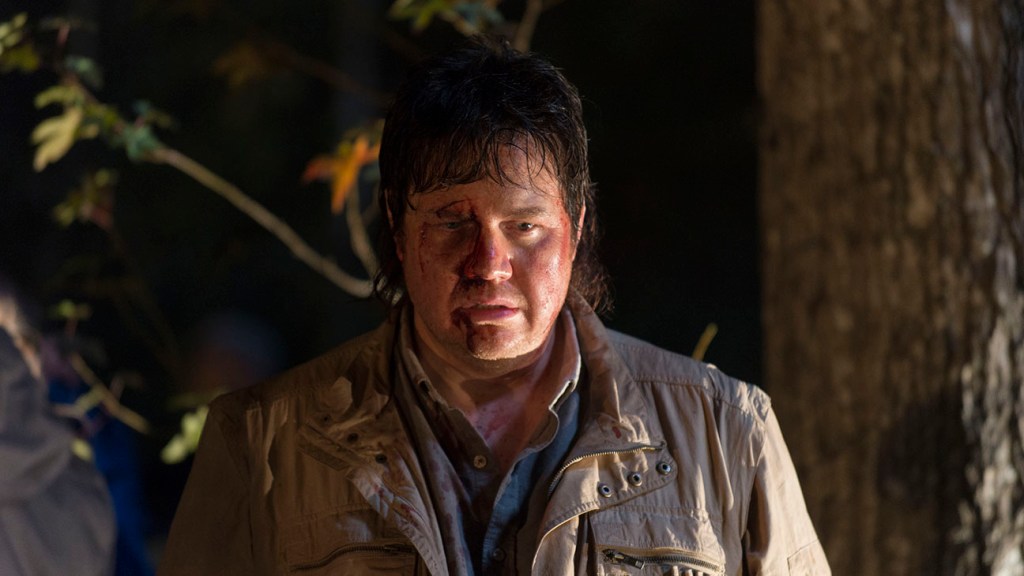 Previewing the premiere, Nicotero said that every season premiere has a different tone, this year being no exception: “Season four was at the prison. Season five was Terminus, which was more of a big action thing, when Carol went and blew everybody up. Last year we went for much more of an epic scale. We found a quarry with thousands of walkers and set our story off. Every season we look for a different tone for our premiere. Because everybody knows how the season ended last year and that someone is going to go, it was more of a challenge going into it this year, with people knowing what to expect. For me, the biggest moments were found where you won’t expect them. There are some unbelievable performances that come out of the fog and haze and post-traumatic stress of the actual moment that sets the stage for the entire season.”

With that said, the shooting of the premiere was stressful, according to Nicotero: “When we were finished, it took me a couple of weeks to recover from it, and I was just there whispering into people’s ears and watching them do what they do so amazingly well.”

Nicotero went on to note that by the end of the season, they will have filmed 99 episodes of The Walking Dead: “Season 8 will be our 100th episode, the premiere.” The revelation caused Cohan to break down in tears as she thanked the audience: “You all have been on such a huge journey with us. Thank you for caring and being mad when you don’t know things. This is larger than our lives. It’s larger than our show. It’s such a privilege. It’s such a great thing.”

“I can never say how she would handled it differently,” Cohan continued, talking about how Maggie would have reacted to Negan if she wasn’t suffering from illness during the finale. “That’s what’s so rare about this episode and what it propels everyone into. It’s so unexpected, jarring and destabilizing. The story that comes from this year is insane. We were completely knocked off our feet, literally, to the ground. We will see how people deal with what they could and should have done.”

The panel concluded with the clip from the season premiere, the thoroughly harrowing scene leaving the audience oscillating between stunned silence and occasional yelps from those who understood the implication of Negan taking Rick’s hatchet. You have to hand it to AMC; they sure know how to end a Comic-Con panel.