[This story contains spoilers for season nine, episode 15 of AMC’s The Walking Dead, “The Calm Before.”]

Even though the television series and original text often diverge, there are some moments from the Walking Dead comic books that were always going to make it onto the screen: Shane (Jon Bernthal) dying early on, Rick (Andrew Lincoln) and his allies losing everything at the prison, the eventual turn toward life in Alexandria, the death of Glenn (Steven Yeun) at the sadistic hands of Negan (Jeffrey Dean Morgan), the war against the Saviors, the resulting time jump…

…and now, the latest shoe to drop: the dead men, women and children whose severed heads mark the border between the Alexandria Safe-Zone and the Whisperers. It’s such a disturbing act of violence, that it served as the conclusion to Robert Kirkman and Charlie Adlard’s third Walking Dead compendium, leaving readers who experience the story in massive hardcover format on an especially brutal cliff-hanger.

Of course, as is the Walking Dead custom, the details have changed somewhat between the comics and the show — the players, more than the circumstances. In the comics, events unfold similarly. Just as in “The Calm Before,” the Alexandria Safe-Zone enjoys a sprawling fair to celebrate their shared spirit of community. Simultaneously, there’s a hostage negotiation unfolding. Rick Grimes leads a group into the wild to find the Whisperers and barter for some captured friends. During the meeting, Alpha takes Rick off on his own, and shows him the massive herd of walkers she has at her disposal. For the show, since Rick is no longer in the mix, Daryl Dixon (Norman Reedus) stepped up as Alpha’s foil, offering a grungier version of Rick’s more diplomatic yet firm approach.

After the trip to the sprawling site of the dead, Alpha hands Lydia (Cassady McClincy) over to her new enemies, disowning her daughter for selling out the Whisperers. The show took a different approach, using the newly introduced flashback structure to feature a scene between Alpha and Lydia confronting one another at the Kingdom, marking a full separation from each other. 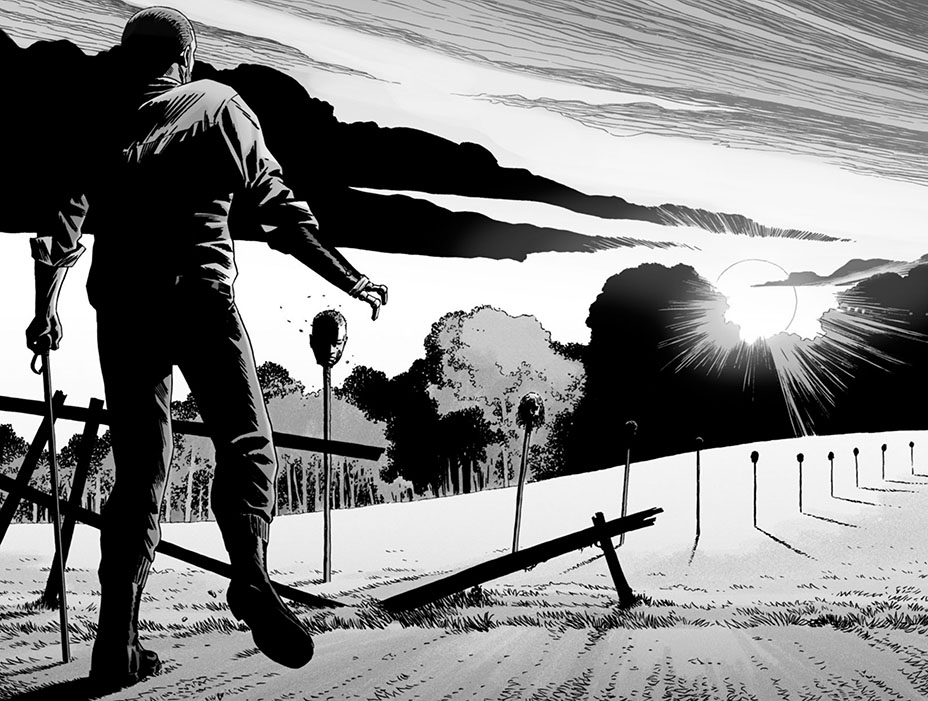 As on television, Alpha warns the group that there’s a new border wall marking the divide between the Whisperers and the Alexandrians’ respective territories. She makes it clear that the survivors won’t be able to miss the border, and of course, she’s right: it exists in the form of several severed heads firmly planted on spikes in the ground. The television adaptation does a marvelous job emulating the same sense of dread, to the point of virtually replicating panels from the comic: on page, folks back at the fair would be shown asking about their loved ones, juxtaposed against an image of the missing person’s zombified head on a spike. Absolutely brutal to behold in both versions of the story.

Here’s where the biggest differences arise: the people who died. In the comic books, the two most prominent victims are Rosita (Christian Serratos) and Ezekiel (Khary Payton), both of whom are still alive and well in the television series. Rosita’s death is almost glossed over in the comics, presented without much more fanfare than the majority of the other killings. It was a similar treatment for Tara (Alanna Masterson) and Enid (Katelyn Nacon), two of the most prominent people to die in the show’s version of events; their dead heads are given the same matter-of-fact presentation, speaking to the randomness surrounding the tragedy. As for Ezekiel, his comic book death was the “big reveal.” That honor was given here to Henry (Matt Lintz), Ezekiel’s son, and a character whom viewers likely see as a bit more expendable than the good king. Nevertheless, the emotional impact of his death cannot be overstated, as seen in the way Daryl and Carol (Melissa McBride) reacted to laying eyes upon the poor lost soul.

What happens next in the comic? Spoiler alert: a whole lot. But those are stories for future episodes, potentially as soon as the finale. For now, it’s enough to know that while the details may have altered from one medium to the next, the spirit of this unforgettably stomach-churning Walking Dead killing remained alive and well for the television series. 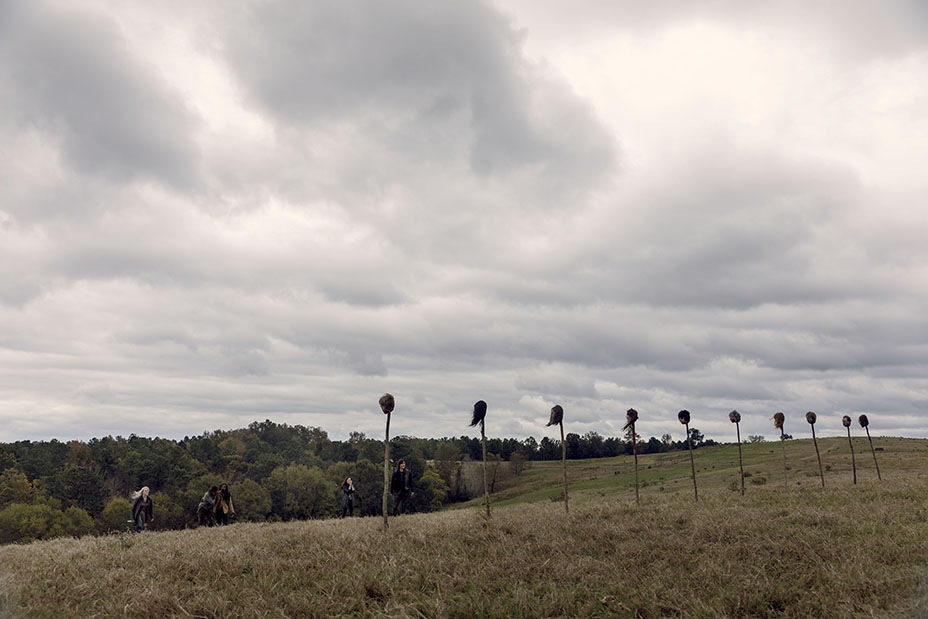 Follow THR.com/WalkingDead for more coverage leading up to and through the season nine finale, which airs March 31.