[This story contains spoilers through the latest episode of AMC’s The Walking Dead.]

There’s something out in the distance.

Perhaps it’s not something that translates immediately upon reading Oblivion Song, the new comic book from Walking Dead creator Robert Kirkman, illustrated by Lorenzo De Felici, hitting shelves March 7. But as the first issue’s story reaches its climax, scientist-turned-warrior Nathan Cole’s colleague Duncan gives voice to the name from which the series derives its title.

“The sounds… when nothing was going on,” he says about the ethereal noises of the strange universe around which Oblivion Song revolves. “The few times there wasn’t a monster chasing us. In the quiet moments… the breeze, the creatures in the distance, insects… it all came together like… it sounded like nothing I’d ever heard before. It was like music.”

Given the medium, sound is not one of the senses most easily seduced in the realm of comic books. And yet, for his newest launch, Kirkman has anchored the very name of Oblivion Song in the noises one hears in the monster-filled dimension that exists alongside our own.

“Our every day white noise, especially coming from Kentucky and spending a lot of time in Georgia on the set of Walking Dead… there’s no such thing as silence,” Kirkman tells The Hollywood Reporter about the inspiration behind the title. “If you take a moment to realize you have crickets over here and you have wind over there, there are distant car horns, birds chirping, winds rattling through trees… then when you start applying that to another dimension, you’re thinking about the noises animals would make, and the way the breeze would sound through different fungal formations as opposed to trees. To me, it would be really remarkable to be in another dimension. I’ve never really heard about stories exploring that aspect of going to an alien world.”

For years now, Kirkman planned on going to this alien world, with original ideas for Oblivion Song dating back to the early 2000s. According to Kirkman, who launched Skybound Entertainment in 2010, the first scene of Oblivion Song — in which the hero uses dimension-warping darts to save humans from certain evisceration at the maw of a massive monster — was envisioned long before his time writing Ultimate X-Men, Irredeemable Ant-Man and other titles for Marvel Comics. A creative lifetime ago, in other words.

“I would put it on a shelf, and a year or two would go by, and I would start thinking about new things to add to the world,” he says of the creation process. “This has probably been the slowest-burn concept I’ve ever had. It’s definitely the one that’s gestated the longest.” 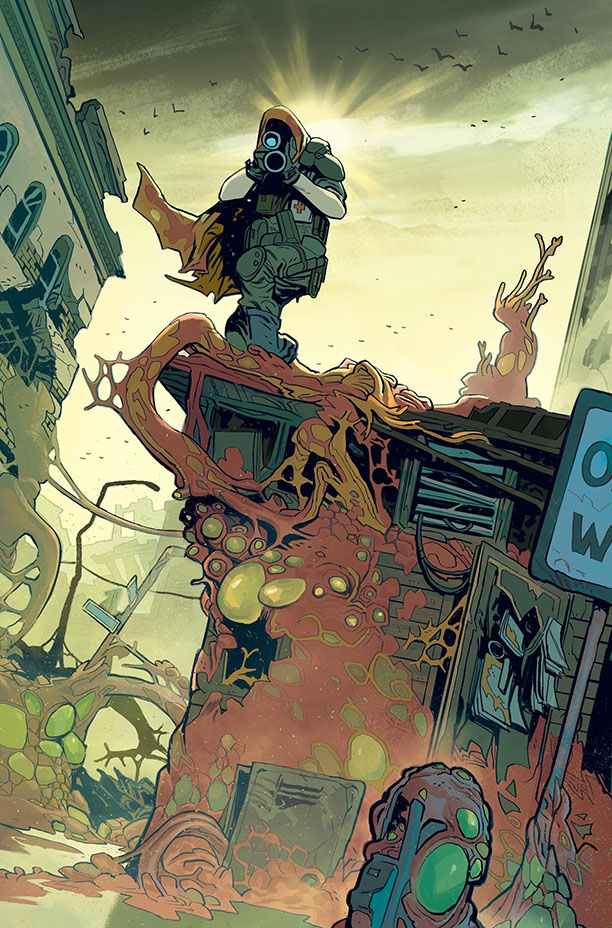 In some certain surface respects, Oblivion Song stands parallel to The Walking Dead, Kirkman’s flagship series that has launched two television series, multiple web series, video games and books on its way to becoming a multibillion-dollar franchise. Both stories deal with an apocalyptic event, but in the case of Oblivion Song, Kirkman describes it as “apocalypse adjacent.” Years before the story, an enigmatic event occurred, leaving some men and women trapped inside a hellish world referred to as “Oblivion.” Protagonist Nathan Cole takes it upon himself to travel to this world and save the people left behind, despite little to no assistance from government agencies.

“It would be as if Rick Grimes could pop into the zombie apocalypse and then pop back out and go into Starbucks and talk about how difficult his work day was,” says Kirkman, comparing the core premise of Oblivion Song to the Walking Dead universe. “It makes the story more unique when you think about it like that. What kind of character will take it upon themselves to jump into the apocalypse and risk his life every day? He doesn’t have to go over there. No one’s making him do this. He could just stay home and spend time with his girlfriend. It does not pay especially well. It’s technically illegal. He’s risking his livelihood by doing it. But still he does it.”

Oblivion Song arrives at a moment of change for Kirkman and Skybound Entertainment, launching mere weeks after the conclusion of one of the creator’s seminal works: Invincible, co-created by Cory Walker and illustrated by Ryan Ottley for the vast majority of the superhero comic’s run. While there are still plans for Invincible (including a Universal feature film adaptation written, directed and produced by Seth Rogen and Evan Goldberg) the comics have reached the end of the line after 144 issues and 15 years in the universe.

“It was a tough one,” he says about wrapping Invincible, which launched a few months before the first issue of The Walking Dead in 2003. “I’m not super happy it ended. It was my plan, but I miss the book already.”

With that said, expect no end in sight for The Walking Dead, often described as “the zombie movie that never ends.” Kirkman says the end of his superhero epic all but guarantees the continued existence of his horror tale the foreseeable future: “Invincible died so Walking Dead can live!”

Even if the comic book remains on course for the foreseeable future, The Walking Dead is in the midst of massive changes on television. For one, longtime showrunner Scott M. Gimple has taken on a new role overseeing the greater Walking Dead franchise, including Fear the Walking Dead, which will become closer cousins with the flagship series when Lennie James (Morgan) becomes a series regular in season four.

“It’s great having Scott’s hand in the Fear the Walking Dead pot,” says Kirkman. “Having Scott have a more active role will only strengthen the overall franchise. That’s needed. You need somebody who has a bigger hand in all things to keep things going.”

There are other changes onscreen, of course, including the death of Carl Grimes (Chandler Riggs), easily the biggest departure from the Walking Dead source material as it currently stands.

“Carl’s death really is a huge catalyst that sets the stage for the majority of the rest of season eight,” Kirkman says of how the character’s exit will impact the show’s future. “It’s not only going to affect Rick in some pretty obviously significant ways, but it will also have an effect on Negan (Jeffrey Dean Morgan). It’s going to play into this conflict in some interesting and unexpected ways. We wanted to have a huge emotional sendoff for Chandler and the character, and I’m very happy that we accomplished that. But Carl’s legacy will live on in some very big and important ways for many episodes and possibly seasons to come.”

Perhaps the biggest change of all is yet to come, given the final image of the midseason premiere: Rick Grimes (Andrew Lincoln) bleeding badly, sitting against a tree, looking like he’s at death’s door. Should fans brace themselves for a Walking Dead without Rick in the picture? Kirkman, who says Andrew Lincoln has a deal in place beyond season eight, stops short of looking at the character’s future under such grim terms, at least in terms of the show.

“I don’t expect that,” Kirkman says of whether the scene is suggesting the looming death of Rick Grimes. “That’s not an intention, there. I’ve said from the very beginning that no one is safe. I do strongly feel like the show could survive without a Rick Grimes. There’s certainly a lot of story to tell without that central character. I’ve talked a lot about how Rick Grimes will definitely die in the comic book series at some point before the series’ conclusion, just because I want to make sure everyone knows that no one is safe. But I don’t think you should read too much into that [scene].” 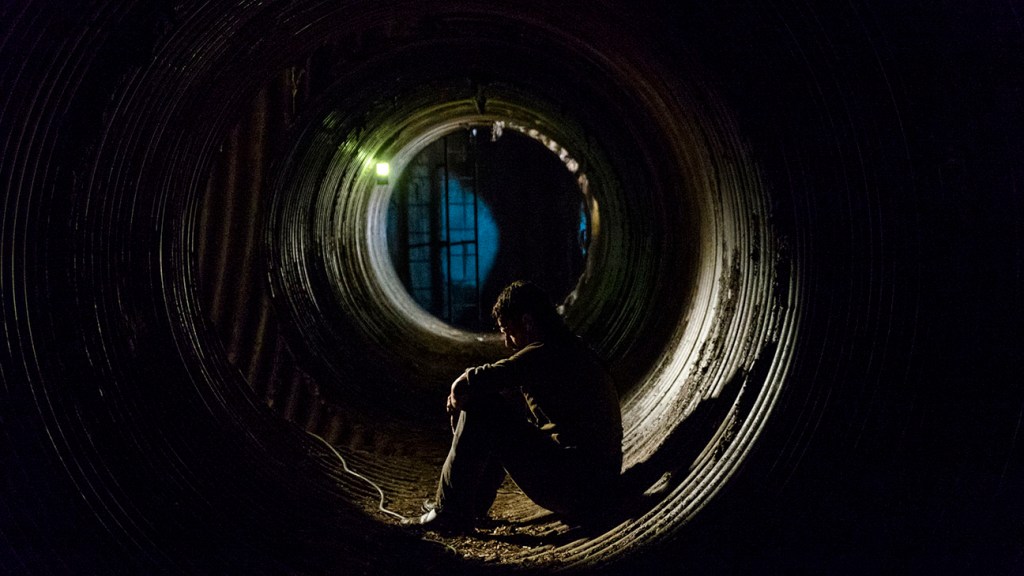 Whether or not Walking Dead walks forward without Rick Grimes, imminently or further down the line, Kirkman says there’s a concerted effort to keep the franchise and viewers alike on their toes as they stare down the barrel of a ninth season on television.

“It’s indicative of an overall effort by AMC to shore things up as we move into season nine and really make sure we’re in the strongest footing possible for the future,” he says. (It’s worth noting that Kirkman exited his overall deal with AMC in favor of a lucrative pact with Amazon Studios amid his lawsuit over profit participation against the cable network.) “As franchises start to get long in the tooth, you can lose your way a little bit. We want to desperately try to avoid that. We’re poised for bigger and better things extremely late in our run. We’re moving into year nine here, where most shows start to wrap up. I think the future is bright, and there’s a lot of really great material coming up from the comic book, and not from the comic book, that will keep this universe viable for many, many years.”

As for Oblivion Song and its future as a franchise? While Kirkman is most focused on its present existence as a comic book, he’s allowed himself to contemplate how his latest story might translate to live action, whether in film or television. “A radio play would be my preference,” he jokes. “I could see there being strengths to both avenues. I’ll have to pick at some point, but I’m not going to say.”

“We’re in the middle of a television arms race,” he adds, meditating on how the medium has changed just in the time since Walking Dead first aired in 2010. “People are spending more and more money on television, which is pretty great. I definitely think the potential is here to do some very interesting things. It’s a story of alien worlds and massive monsters, but in some cases, the sky is the limit in the television world. I’m neither confirming nor denying that there are any plans to take things in that direction [for Oblivion Song], because it’s too early to talk about that.”

With that said, Kirkman allows one thought about the titular sound at the heart of Oblivion Song, and how it might reach ears in a live-action adaptation one day: “It’s possible very soon in the future we’ll have to figure that out. That will be a nice task for a very great sound designer at some point.”

Oblivion Song #1 arrives March 7. For more on The Walking Dead, follow THR’s coverage of the series over at THR.com/WalkingDead.