“Bounty,” Sunday’s episode of The Walking Dead, hinges on the first open conflict between the Hilltop and the Whisperers. Somehow, it’s also the most romantic episode of the time-jumped ninth season, with several different couples wandering into the spotlight: Ezekiel (Khary Payton) and Carol (Melissa McBride), Henry (Matt Lintz) and Lydia (Cassady McClincy) and — depending on your interpretation of the final scene — perhaps even Daryl and Connie (Tony-nominated actress Lauren Ridloff), the deaf survivor first introduced in Andrew Lincoln’s final episode.

The tensest scenes of “Bounty” focus on Daryl facing off against Alpha (Samantha Morton), queen of the Whisperers, who has arrived at the Hilltop to retrieve her daughter, Lydia. She’s joined by her pack of feral survivors, one of whom is the mother of an infant. When the baby’s wailing draws the attention of nearby walkers, Alpha very nearly allows the child to be sacrificed, a testament to what she sees as the natural order of things. Hiding nearby: Connie, who risks life and limb to save the baby, leading to a tense action scene built on her inability to hear in visibly difficult surroundings.

Connie nearly loses her life when a walker sneaks up from behind, only to be saved in the eleventh hour by Daryl, their first true scene together. Hours later, after the Whisperers are gone, they have a much more impactful conversation: Daryl, who has decided to leave the Hilltop in search of Alpha and her pack, runs into Connie, who has decided much the same. The two proceed to communicate to each other on note cards (as far as a meet cute, to Andrew Lincoln, this is perfect), all while Emma Russack’s emotional ballad “All My Dreaming” provides the score:

The two wander out of the Hilltop (accompanied by Daryl’s dog, Dog), closing out the episode with an undeniably electric charge.

What, no one else feels it? Just us?

Fine, maybe. Admittedly, it’s hard to convey the emotional weight of the scene in the written word, which is ironic, given how much is said in the scene using the written word. It’s a bit of a feel thing. But there’s also much in the way of body language, the way Connie interrupts Daryl and refuses to let him continue on alone, the way he opens himself up for that possibility after spending the last few years all on his own.

There’s all the build-up beforehand, too, even if it’s unrelated to Daryl and Connie specifically. Russack’s moving music plays underneath various scenes of Walking Dead heroes finding love with one another: Ezekiel and Carol, Alden (Callan McAuliffe) and Enid (Katelyn Nacon), Henry going off in pursuit of Lydia after they shared a kiss a few scenes earlier… even the baby Connie rescued finds love in the form of new caretakers Earl (John Finn) and Tammy (Brett Butler), who lost their son Kenneth at the start of the season.

Really, love is the central theme of “Bounty,” not just the closing montage; the fact that the hour ends with Daryl and Connie together at the height of an emotional ballad doesn’t feel like a coincidence. Even the lyrics to “All My Dreaming” seem to call to Daryl’s often unspoken core: 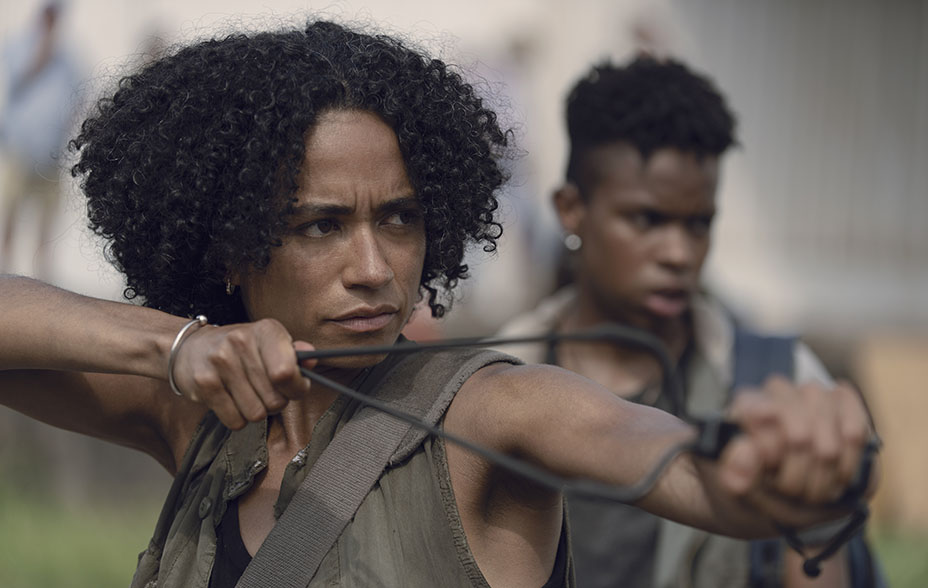 Let’s look beyond feeling. Is there comic book precedent for Daryl and Connie becoming an item? At first glance, it wouldn’t seem so, since Daryl doesn’t exist in the comics. But Connie does, and as she’s written by Robert Kirkman, she enters the scene in a relationship. In the adaptation process, Connie’s comic book boyfriend Kelly has become Connie’s television sister Kelly, played by Angel Theory. Connie isn’t a major character in the source material by any stretch of the imagination, but there is indeed precedent for her to be romantically linked with a fellow survivor.

Beyond the comics, of course, Daryl’s romantic life has been the subject of conversation in Walking Dead circles for years and years now. So many characters have been raised as possible partners, from the late Beth Greene (Emily Kinney) to Aaron (Ross Marquand) and even beyond. The most popularly mentioned hopeful partner, without peer: Carol. For what it’s worth, Connie and Daryl getting together would give new meaning to “Caryl,” the portmanteau some fans have used in support of a Carol-Daryl romance. How’s that for fate?

For his part, Reedus’ most recent remarks on the subject make it clear that if Daryl ever embarks on a relationship, it will be a major moment for the show.

“I think when it happens, it’s going to be a big deal,” he said in an interview. “I’m glad that we have played him the way we’ve played him. I think if we would have had some hot, steamy barn sex somewhere, it would be over and done [by now]. I don’t think he’s that type of a guy. I think he’s the type of guy that when he does it, he will be in love. He’ll fall in love. He wears his heart on his sleeve. Everything he means, he says. When he cares about somebody, he cares about them. Playing it in that direction is better than having an episode or a scene in one thing. I think it means more to him.”

If Daryl’s ever going to find that meaning, there’s no better time than now. Andrew Lincoln and Lauren Cohan are gone, with Danai Gurira on her way out. With so many comings and goings in the Walking Dead universe, Daryl Dixon remains a constant. The idea of pairing him off with an equal — someone as complex as Connie, brave and morally sturdy enough to face down certain death in order to save a child of the enemy — feels like the right move for the character. When Michonne leaves, potentially (and likely) in pursuit of Rick, it will be hard for the show to explain Daryl’s continued dedication to the Alexandria Safe-Zone. A new person to care about, someone he can fall for and fight for — someone like Connie — might just be what keeps him grounded in place.

Beyond what’s right for Daryl as a character, it feels like the right moment for the Walking Dead as a franchise. As viewership continues to drop, showrunner Angela Kang and her fellow creative forces are incentivized to do everything in their power to invest the audience in new characters. They are already doing an admirable job of turning Connie into one of the most compelling new characters on the board. If the focused characterization of Connie continues while drawing her closer to the most iconic character still left in the series in Daryl, consider the audience investment in Connie (and “Caryl,” or “Caryl 2.0” if you prefer) well and fully made.