Continue to The Hollywood Reporter SKIP AD
You will be redirected back to your article in seconds
Skip to main content
November 18, 2018 8:00pm
Logo text

The Walking Dead and Rick Grimes are walking two different roads these days — at least, they will be, once Rick is back in walking condition.

Even with Andrew Lincoln away from the flagship series, the once and future Walking Dead franchise figurehead remains a critical part of the narrative, as was made clear in Sunday’s installment, “Stradivarius.” Look no further than the story of the new No. 1 on the call sheet, Norman Reedus as Daryl Dixon, for proof.

In “Stradivarius,” Daryl finally uttered his first words in the new time-jumped era of the zombie apocalypse. What’s the man doing out in the wilderness by himself? Why is he spear-hunting for fish and sleeping in a tent in the middle of nowhere, when he could just as easily spend his days living in Alexandria, the Kingdom or the Hilltop? The answer finally materializes thanks to Daryl’s scenes with Carol (Melissa McBride) and Henry (Matt Lintz), in which the bow-wielding badass’ current motivations are revealed: he’s still keeping hope alive for Rick Grimes.

“They never found the body, ever,” Daryl tells Carol during a quiet conversation between the two old friends, referring to Rick’s fate after the bridge explosion. “After a while, it just got easier to stay out here.”

It’s heavily implied that Daryl never gave up on the idea that Rick survived his seemingly fiery demise, considering his body wasn’t found in the wreckage. Good thing, too, as the audience knows the truth: Rick did survive, medically evacuated from the scene via helicopter, waiting to return to the world of The Walking Dead in a forthcoming film series for AMC.

Whether Daryl ever confirms his hopes or not, that’s a matter for the future to settle — but the attempted reunion is just as important as the reunion itself. Not only does Daryl confirm he has spent the past six years carrying a torch for his fallen friend, there’s visual evidence to suggest something very serious happened during that search — not just for Daryl, but for Michonne as well. 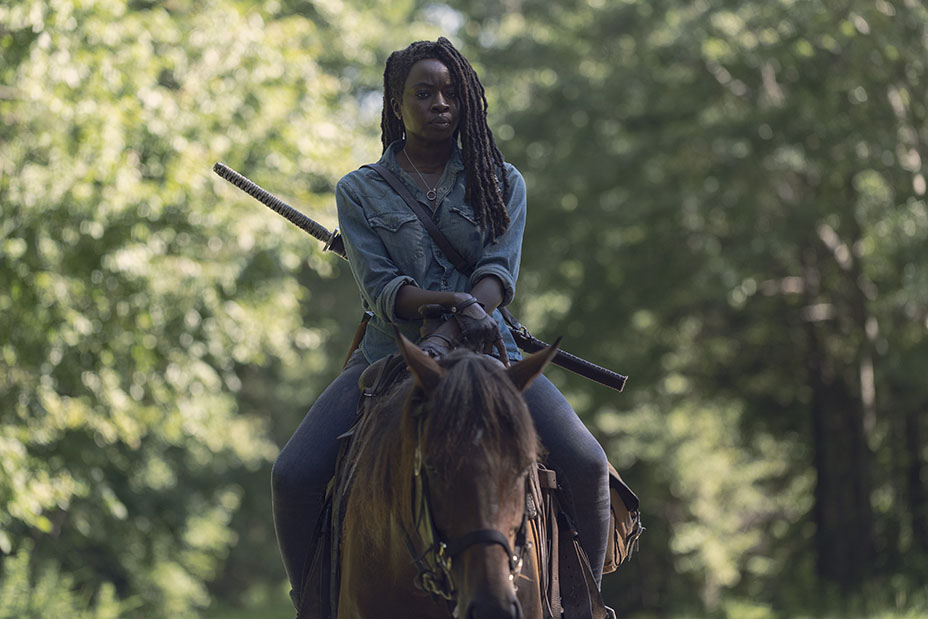 During their campsite scenes, Daryl is seen briefly without his shirt on. More important than the fan service, there’s this: Daryl’s brand-new scar, a huge X carved into his back. If the marking looks familiar, it’s with good reason: Michonne (Danai Gurira) has a similar scar, as revealed during “Who Are You Now.” Michonne’s back scar was already intriguing enough on its own at first glance, but paired with Daryl’s matching wound? It all but guarantees these two warriors suffered a very significant ordeal during the time jump, all thanks to their search for Rick.

Who is responsible for carving their mark into Daryl and Michonne? Could it be the Whisperers, the enemies about to make their full arrival in season nine? Such an answer would be a great way of tying both characters even deeper to the new threat, though it’s not exactly the Whisperers’ MO from the comic books. It’s more likely that Daryl and Michonne encountered some completely different group, one that’s invented purely for the show — or at least, invented for the extended Walking Dead brand, as it’s entirely possible this story might tie directly into the film plans surrounding Lincoln as Rick.

Will Daryl and Michonne’s scars and their shared search for Rick continue to play a role in the season ahead, or will it be saved for one of the new ancillary Walking Dead stories? For his part, AMC programming president David Madden previously told THR: “I have high hopes that Rick and Michonne’s paths will cross again.” With any luck, Daryl will be right there along for the ride.

'The Walking Dead' Just Teased Its Next Major Death