There are two different versions of the main Walking Dead narrative: the story told on the television series, and the story told in the comic books written by Robert Kirkman and illustrated by Charlie Adlard.

Often, the two tales intersect perfectly, with the show’s characters often looking like Adlard’s illustrations come to life. (Here’s looking at you, Michonne and Negan.) The general structures of the stories also align fairly frequently; in both the show and the comics, Rick’s group of survivors begin in Atlanta, spend time on Hershel’s farm, find a prison and engage in a war with Woodbury, encounter crazy cannibals on the road, eventually arrive at Alexandria, and come to a fateful collision with Negan and his band of Saviors.

But there’s one major area of divergence between the show and the comics: death. While both versions of Walking Dead feature copious amounts of bloodshed and heartbreak, the deaths are typically remixed during the adaptation process. Very few major characters die in the comics and on the show in the exact same way — which makes the brain-bashing deaths in the season seven premiere all the more notable.

In the comics, Negan makes his head-splitting introduction in the franchise’s milestone 100th issue. It plays out almost exactly as it does on the show: Negan gathers Rick and his group, lines them up, and randomly decides which person he’s going to kill. Unlike the show, the comic doesn’t shroud Negan’s victim in secrecy. Instead, readers are helpless to watch as Negan violently murders Glenn, bashing his head in like a gore-filled piñata. 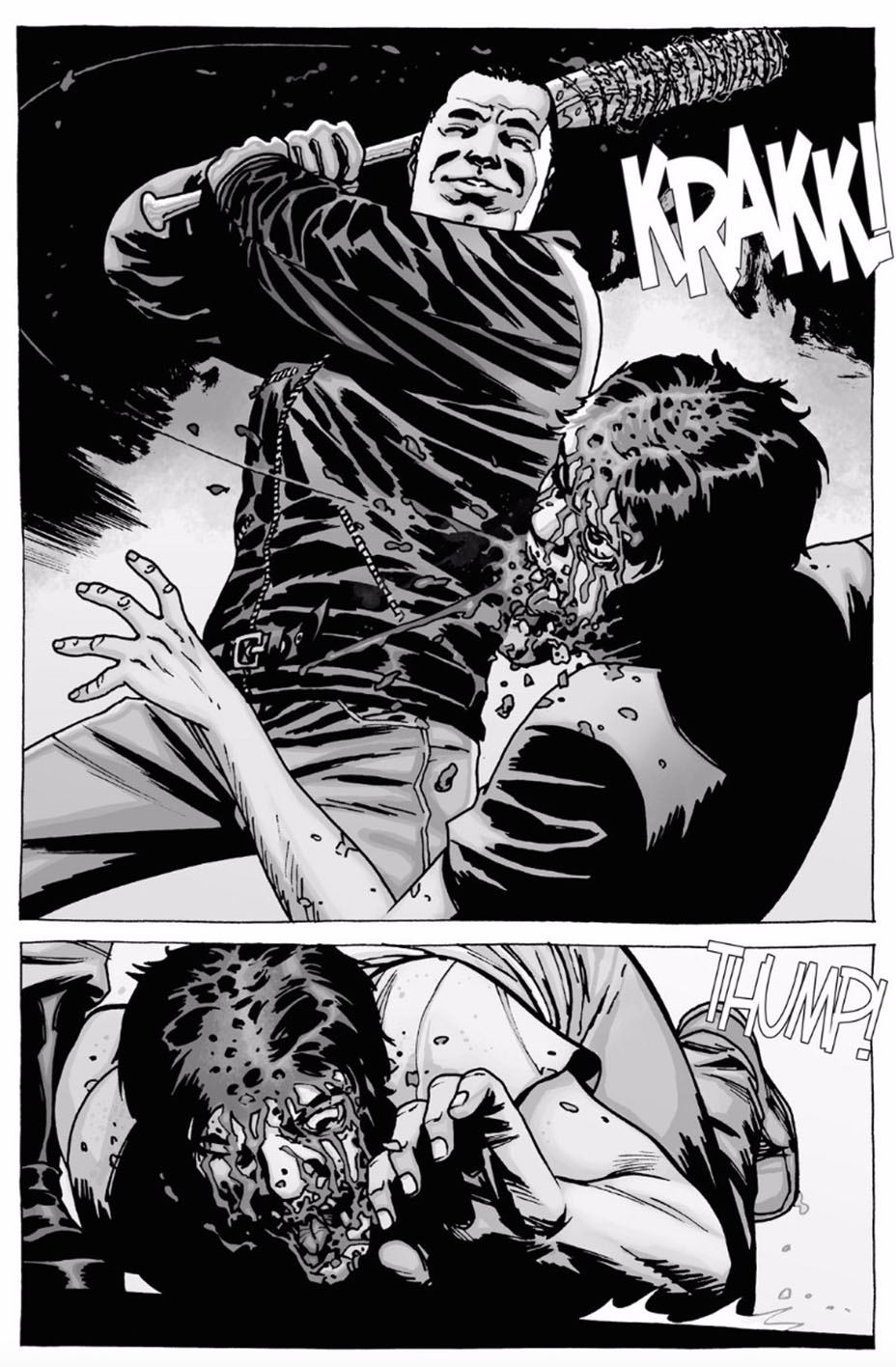 The big question in the months leading up to the season seven premiere was whether or not the show would follow the same path as the comics. Glenn’s death serves as a decisive turning point for the comics, imbuing the survivors he leaves behind with sensations of fear, dread and rage, the likes of which we haven’t seen from them before. Would the Walking Dead show follow the comic book path on this pivotal death, or would it remix the moment as it’s done so many times before? Now, with season seven officially underway, we have our answer: Glenn is dead, crushed by Negan’s bat, but only after Abraham received the same treatment.

In other words, close, but still not exactly the same.

For those who haven’t read the comic books but are curious about how main character deaths differ between the two takes on Walking Dead, here’s a stroll down the blood-soaked memory lane:

1. The show’s Sophia died offscreen, discovered as a zombie in Hershel’s barn. In the comics, Sophia remains alive and well.

2. The show’s Dale was eviscerated by a zombie and subsequently killed by a merciful Daryl Dixon. In the comics, Dale died the way Bob Stookey died on the show: bitten by a zombie, partly eaten by cannibals, and eventually succumbing to zombie fever.

3. The show’s Shane was stabbed in the heart by Rick. In the comics, Carl shoots Shane in order to protect his father. The show offered a wink to that change by having Carl shoot the zombified Shane.

4. The show’s Carol is still alive and well, a far cry from her comic book counterpart. In the comics, Carol effectively commits suicide, allowing herself to be killed by a walker. In fairness, the two versions of the character share almost nothing in common beyond their first name and backstory.

6. Andrea died at the end of season three, shooting herself in the head after a walker bite. She’s very much alive and well in the comic books, still the best shooter in the group, and currently in a romantic relationship with Rick.

7. The show’s Hershel was beheaded by the Governor, inciting the assault on the prison. In the comics, Hershel does indeed die during the Governor’s attack, but not in such dramatic fashion. Instead, he’s shot and killed after witnessing the deaths of several of his own family members.

8. In the comics, the Governor beheads Tyreese, not Hershel. The show’s version of Tyreese’s death was much more serene, as he drifts off into a fairly pleasant fever dream following a walker bite. (Note that “serene” is a relative term in the zombie apocalypse, where getting bit by a walker and having an arm lopped off is somewhat peaceful, considering the alternatives.)

9. Deanna Monroe died during the assault on Alexandria, bitten by a walker and eventually standing up to a massive pack of the monsters. The comic book version of Monroe — a bald man named Douglas, instead of the sorghum-craving Deanna show-only viewers got to meet — also dies during the chaos at Alexandria, but in much less heroic fashion. There, Monroe is eaten alive by walkers while he shoots his gun wildly. Indeed, he’s the one who shoots out Carl’s eye in the comic.

10. The show killed Denise much earlier than she died in the comics — but more notably, the show gave Denise someone else’s iconic comic book death: Abraham’s. In the comics, he’s shot through the eye with an arrow in the middle of an insightful conversation with Eugene. Clearly, the show took different approaches to killing both Denise and Abraham. 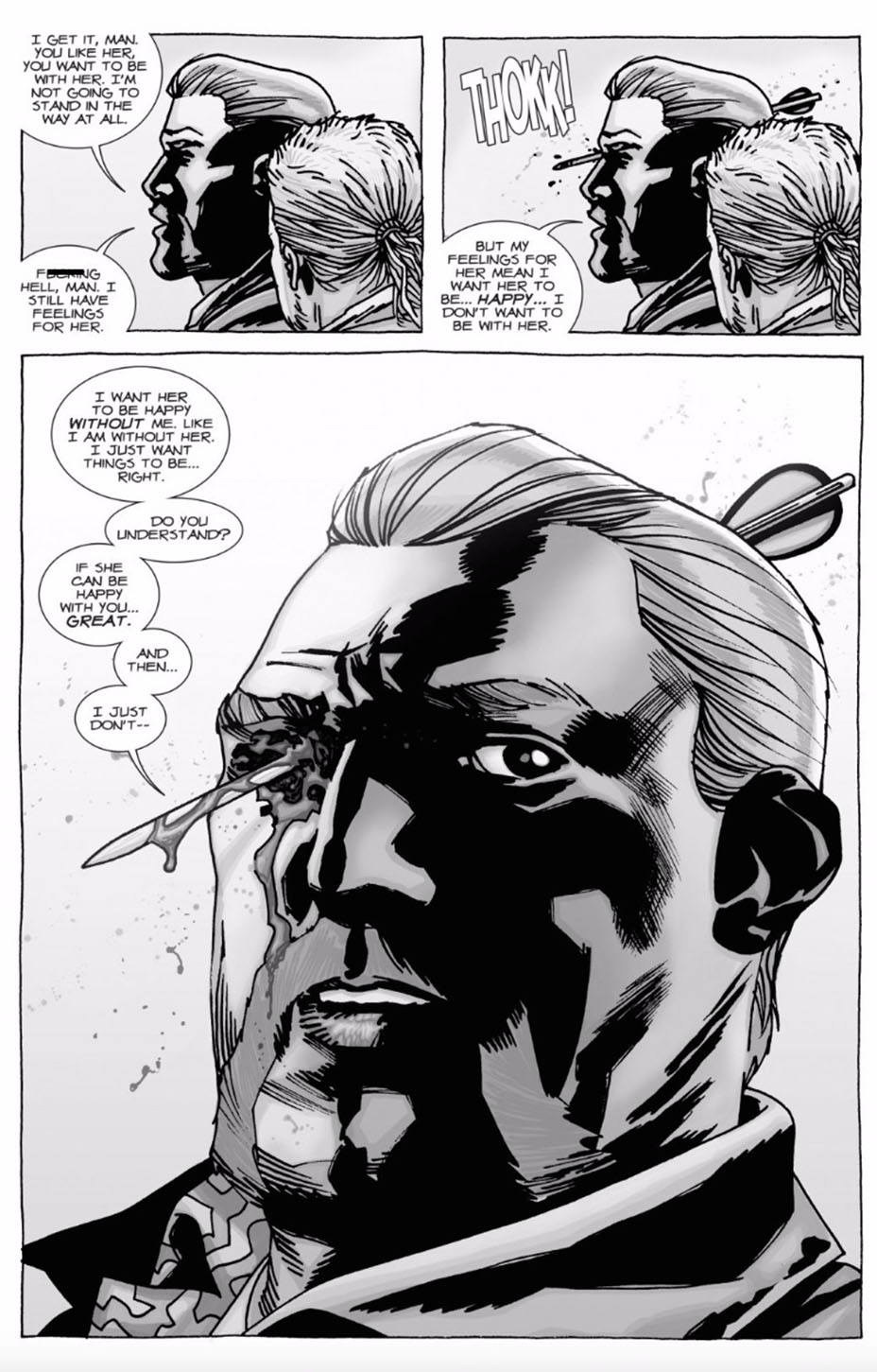 There are exceptions to the rule, of course. Some deaths on the show played out exactly, or close to, the way they played out in the comics. For instance …

** Two of the show’s earliest victims, Amy and Jim from season one, both die either during or as a result of the zombie raid on the group’s Atlanta camp.

** The Governor gains a few extra scratches and stab wounds from Rick and Michonne on the show, before Lilly puts him down for good with a gunshot to the head — just like she kills him in the comics.

** Gareth and the Terminus cannibals are not in the comics, but they mirror a group of human-eating hunters who are suddenly ambushed and butchered by Rick’s group.

** And then there’s Jessie and her family, eaten alive during the zombie attack at Alexandria. Rick even cuts Jessie’s hand off in the comic books, too.

But more often than not, a character’s death in the comics differs pretty wildly from their death on the show. In the case of Glenn, we now know which side of the divide he stands on: as one of the few examples of someone whose fate on the show mirrors the same fate from the source material … well, almost.