The Kingdom offers The Walking Dead fans with plenty of reasons to raise their eyebrows, from King Ezekiel (Khary Payton) to his sidekick Shiva and well beyond. But one of the biggest questions raised in season seven’s second episode, “The Well,” involves a very different animal than Ezekiel’s ferocious tiger: the pig.

Specifically, the pigs that Ezekiel and his companions are providing to the Saviors, Negan’s (Jeffrey Dean Morgan) ruthless gang that conquers and reigns over other communities. In the episode, Ezekiel takes a group of his best soldiers, including Morgan (Lennie James), on a boar hunt, and Morgan watches as they feed the captured pigs with captured walkers. From there, Ezekiel surrenders the pigs, filled to the brim with the dead, over to the Saviors, who clearly don’t know what their future ham sandwiches so recently feasted on.

A lot of viewers are wondering why Ezekiel feeds his pigs with meat from the dead. Is it another “tainted meat” scenario, like the one Bob (Lawrence Gilliard Jr.) threatened against Gareth (Andrew J. West) and the Terminus cannibals back in season five? Is Ezekiel poisoning the Saviors, in other words? Is he waging a secret biological war against the people who killed Glenn (Steven Yeun) and Abraham (Michael Cudlitz)?

As wonderful as that would be, it’s likely not the case — certainly not where the comics are concerned.

In Robert Kirkman and Charlie Adlard’s The Walking Dead #117, none other than Ezekiel himself dispels the notion of animals getting sick from eating walkers. The topic comes up when Ezekiel’s tiger Shiva thoroughly savages a pack of zombies, happily feasting on the remains. There’s some concern about what this could mean for Shiva, but Ezekiel quickly calms those fears.

“Whatever is in [the zombies] that makes us get up and walk seems to have no effect on animals,” Ezekiel says, before adding with a smile: “That said, I wouldn’t smell [Shiva’s] breath anytime soon.” 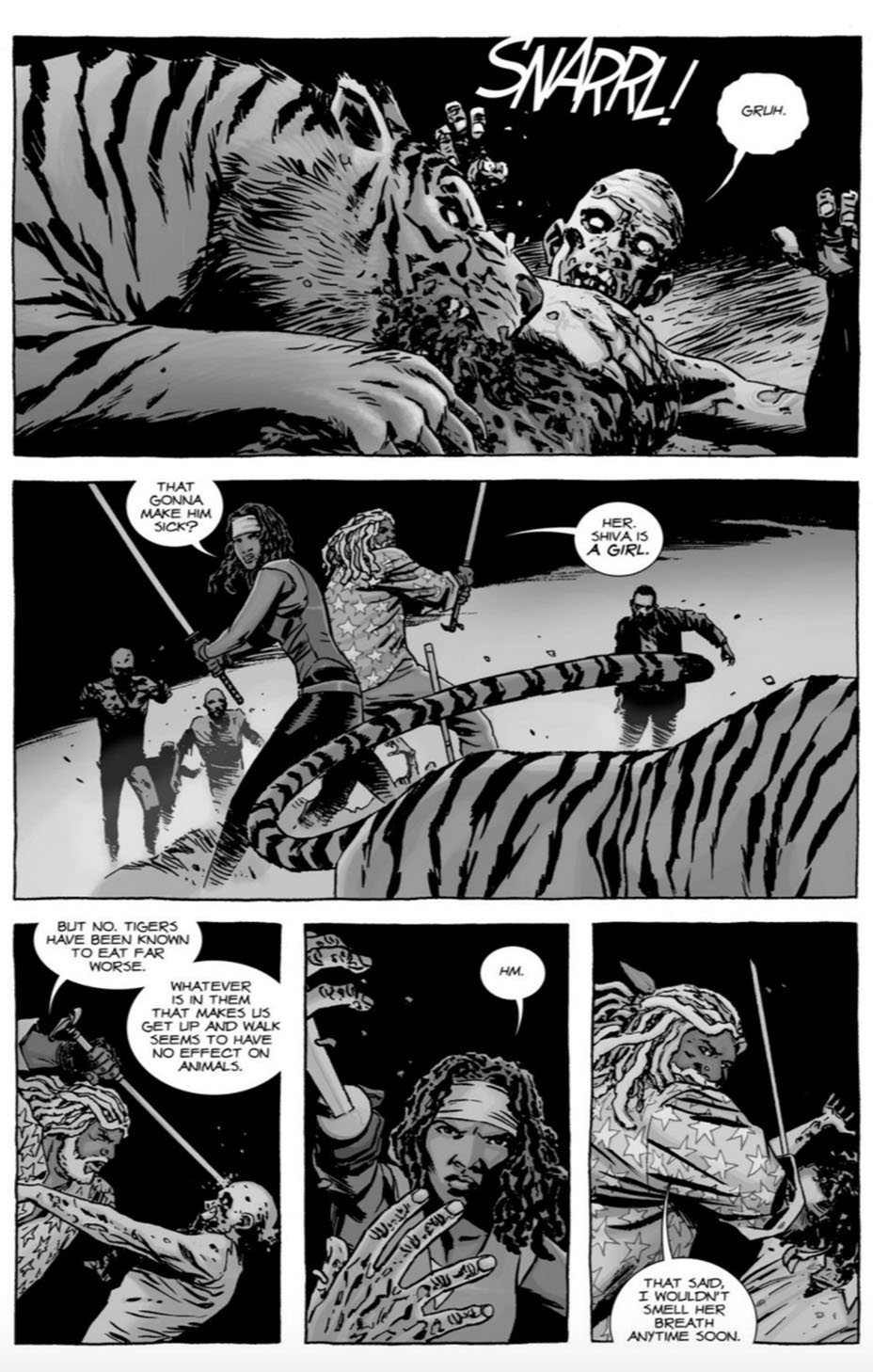 If the show’s universe follows the same rules as the comics, then, animals don’t get sick from eating walkers — so no, Ezekiel’s pigs aren’t secret zombie bombs, as cool as that might be.

Why feed the pigs with walkers, then? Perhaps it’s so the Kingdom doesn’t deplete their own resources on services rendered for the Saviors. Perhaps it’s also because Ezekiel is keeping his deal with the Saviors far away from the Kingdom’s radar. (To paraphrase what Ezekiel says in the episode: secrets are a ruler’s burden.) It could be any number of reasons — but it’s probably not because they’re trying to poison their enemies with walker fever.

That being said, there still might be some zombie-logical warfare to look forward to later in the AMC series, based on the comic book’s All Out War arc — but that’s a story for another day, and potentially another season.