[Warning: This story contains spoilers through season seven, episode four, of AMC’s The Walking Dead, as well as the comics on which the show is based.]

Rick Grimes (Andrew Lincoln) has enough on his plate without worrying about an insurrection. But he certainly has cause for concern in that regard, given the fact that Spencer Monroe (Austin Nichols) is openly contemplating a future for Alexandria without Rick in the vision.

Spencer voices these concerns at one point in “Service,” the latest episode of The Walking Dead. He only tells Rosita (Christian Serratos) about his desire to dethrone Rick, but he may as well spill his guts in front of Rick himself, given their uncomfortable verbal altercation near the end of the episode.

Is this the beginning of a critical new arc during the Negan (Jeffrey Dean Morgan) era? Is Spencer actually planning a coup against Rick, eyeballing a way to win back his Alexandrian birthright? Perhaps it is. At the very least, the story has roots in the comic books — but depending on how closely it hews to the comic books, perhaps Spencer’s vengeance plot won’t last long. 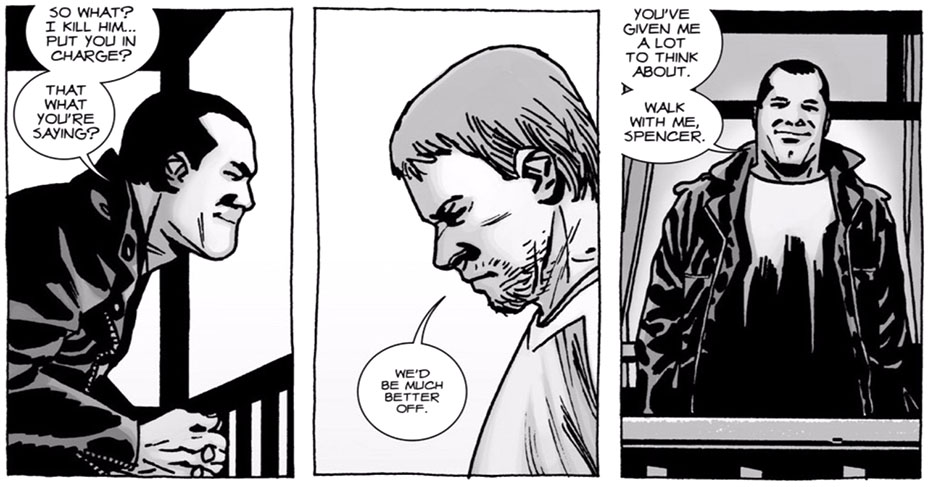 In the comics, Spencer’s dissatisfaction with Rick is a slow-burning story. It begins when Alexandria comes under attack by walkers. Spencer, who has been attempting a relationship with Andrea (played on AMC by Laurie Holden, whose TV character is long since dead but very much alive in the comics), wants to abandon Alexandria in its time of crisis. Andrea breaks things off with a swift punch, and Spencer never fully rebounds from his moment of cowardice.

Flash-forward to Negan’s takeover, and Spencer’s cravenly manner remains. He believes that he’s the man best suited to lead Alexandria through its current existential crisis, even if he’s having trouble recruiting others to his cause.

Finally, in Walking Dead #111 (11 issues after Negan’s bloody introduction), Spencer makes his move. Rick is away from Alexandria at the time, on what Negan believes is a supply run, but is actually a secret meeting with some potential allies. Spencer approaches Negan, who is lounging on an Alexandrian porch, enjoying a delicious glass of running water. Spencer even invites Negan over to play pool sometime. The two become fast friends…until Spencer makes his pitch.

“Rick Grimes is not someone who works well with others,” he says. “He’s a maniac. That’s the best way to put it. He may even want to work with you, but I’m telling you…this guy can’t not be the boss.”

We all know how Negan feels about who’s the boss, so color the man intrigued. Once Spencer insinuates that Negan should kill Rick, the Saviors’ leader takes the last living Monroe for a walk and talk.

“I think about how Rick f—king threatened to kill me. How he clearly hates my f—king guts,” says Negan. “But he’s out there right now like a busy f—king bee…gathering shit to give me, so I don’t hurt any of the nice folks living here. He’s swallowing that hatred to get shit done. That takes guts.”

He continues: “Then I think about you…Spencer…the guy who waited until Rick was gone, to sneak over to talk to me, to get me to do his dirty work so that he could take Rick’s place. You wanted to take over…why not just kill Rick and take the f—k over? You know why?”

Spencer, trembling, can barely get words out before Negan offers the answer: “Because you got no guts.” And with that… 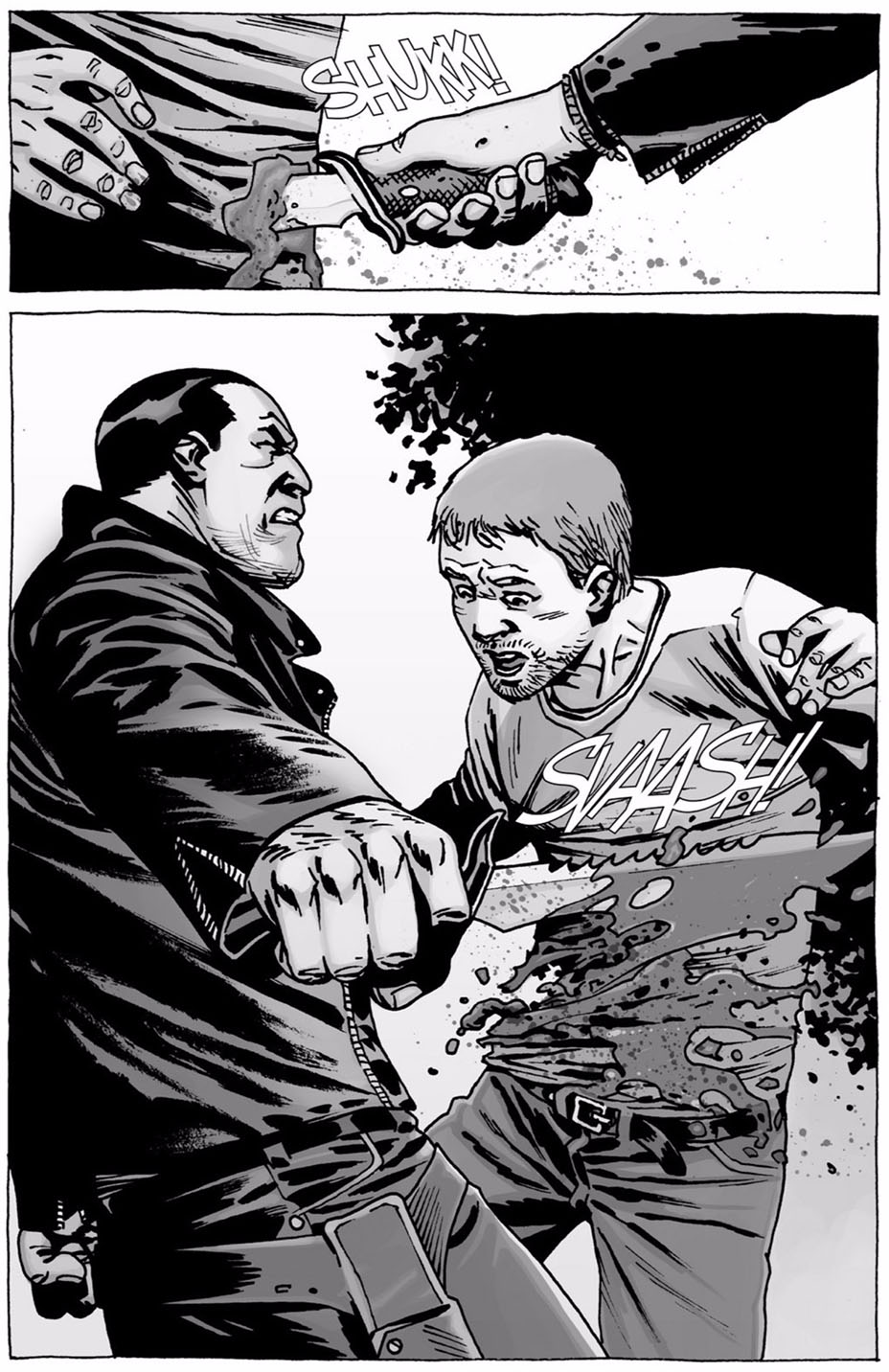 …Negan spills Spencer’s guts all over the street. So much for that little rebellion!

Given that Spencer’s already sowing seeds of doubt about Rick’s leadership on the show, it feels all but guaranteed that he’s on a collision course with some version of his comic book fate. But it’s worth remembering that the show often changes course. For example, the show spent the vast majority of its second season on the Greene family farm, where the comics only spent a small handful of issues dealing with the barn of it all. Will season seven dwell on Spencer’s rebellion over the course of many episodes? Or will he die as he did in the comics, in a quick burst of gutless gore? No matter the pacing, the outcome feels clear: Spencer Monroe is not long for this world. Mourn accordingly.

Follow THR.com/WalkingDead for interviews, news and more from season seven.