Fan favorite Lennie James is officially moving from the flagship to the prequel, in which he will continue to play Morgan Jones. The announcement was made Sunday when James was a surprise guest on Talking Dead.

“Morgan’s arc in The Walking Dead season eight positioned him for the story on Fear the Walking Dead,” Walking Dead showrunner Scott M. Gimple said via a statement read by Talking Dead host Chris Hardwick. “It was also important to see Fear‘s world and characters through new, yet familiar eyes.” 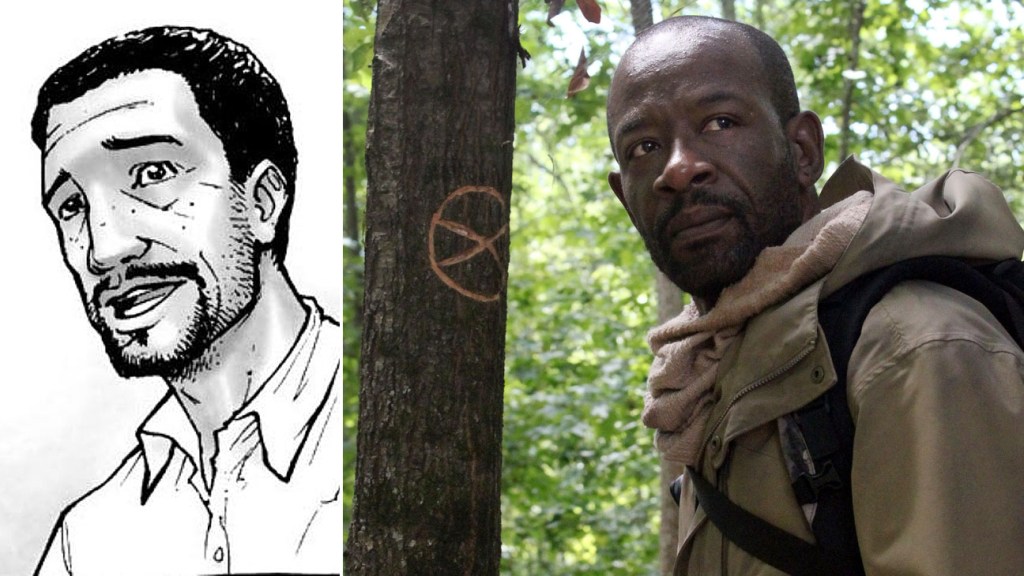 For his part, James said he begins filming Fear on Monday, with his scenes to be streamed live via the show’s social media accounts. The actor, who was the first person Rick (Andrew Lincoln) encountered after waking up from his coma in the show’s pilot, wrapped production on the Atlanta-set Walking Dead days ago and appeared on Talking Dead via satellite from Austin, Texas, where the show is moving its production.

“From the very first moment the whole suggestion of Morgan going over to Fear the Walking dead, the hardest part of that, from beginning to now, has been leaving The Walking Dead,” James said. “Leaving that cast, leaving that crew. I’ve said my goodbyes to the cast and I’ve said my goodbyes to the crew… That show stands or falls on the back of that crew. And I’m going to miss them very much.”

James move to Fear the Walking Dead also confirms news that THR previously reported — that the prequel series is moving its filming location to Texas — a shift that was set up in the finale’s narrative as a new villain (Ray McKinnon) set sail for “what’s left of Houston” with Alicia (co-star Alycia Debnam-Carey).

James’ addition to Fear comes as the lesser-rated series is amid a major reset for its upcoming fourth season. Showrunner Dave Erickson, who developed the series with Walking Dead creator Robert Kirkman, exited the show after the season-three finale. Andrew Chambliss and Ian Goldberg (Once Upon a Time) will take over as showrunners for season four, with Walking Dead boss Gimple also joining the spinoff as an executive producer. Fear has also bolstered its cast, with stars Garret Dillahunt and Jenna Elfman boarding as series regulars. Details on their characters are being kept under wraps.

That James would move to Fear comes as the character continues to struggle with his role in the new world. Morgan guest-starred in seasons one and three before recurring in season five and being promoted to series regular in season six. When he was introduced, Morgan was grieving the loss of his wife, Jenny, and son, Duane, who were both killed in the outbreak. He has struggled with his sanity — and whether or not he needed to kill other survivors — during the most recent seasons.

The decision to move him to the spinoff comes as the flagship series in its current eighth season has also explored Negan’s backstory (that was featured in a one-shot called “Here’s Negan“). That both shows are now crossing over comes after Erickson’s early Fear script (then called Cobalt) originally featured a scene in which Dr. Candace Jenner — aka Test Subject 19 and played by Claire Bronson on the flagship — was introduced. The character previously worked with Edwin Jenner (Noah Emmerich) at the CDC before being infected and ultimately killed. That idea didn’t last long with Kirkman and the storyline was nixed as producers at the time insisted Fear would not be crossing over with the flagship.

Fear the Walking Dead, while not a breakout hit like the flagship series, still performs well for AMC. The drama, which hit a string of series lows in its third season, is one of the top shows on cable (and AMC’s No. 2 overall), with an average of 5.3 million total viewers and 3 million among adults 18-49 with three days of delayed viewing.

'Walking Dead': What Carl's Choice Means for the Future