[This story contains spoilers for the season 10B premiere of AMC’s The Walking Dead, “Squeeze,” as well as Robert Kirkman and Charlie Adlard’s comic book series on which the show is based.]

Shortly before the midseason break, The Walking Dead put forth one of the deadliest pairs yet: Negan and Alpha, the Savior King and Whisperer Queen played by Jeffrey Dean Morgan and Samantha Morton, respectively.

It’s a long-awaited duo as far as the comic book audience is concerned, with a storyline that’s more shocking and short-lived than many show-only viewers could ever anticipate — and a meaningful move down that path finally went down in “Squeeze,” the midseason premiere with an episode title more in line with the main story’s claustrophobic setting, but surprisingly fitting given the scenes between Negan and Alpha.

In “Squeeze,” Negan steps up to the plate to offer some advice to Alpha about a possible insurgency within the Whisperer community. She later takes him on a long walk, which he assumes is the last walk he’ll ever take. Instead, Alpha orders Negan to strip off his clothes; she does the same, and the two alpha survivalists lock lips — raising some hygiene concerns given Alpha’s zombie mask, among many other questions.

“We always felt like we needed some of the story of Alpha, Negan and their strange relationship,” Angela Kang tells The Hollywood Reporter about the Alpha and Negan sex scene, which draws inspiration from the comic books. According to Kang, writer David Leslie Johnson-McGoldrick was asked to find a way to tap into that story and put Alpha and Negan in a position to have sex: “And he was like, ‘Okay! Not quite sure how to get there! Let me work on it!’ He came back with this whole storyline where Negan thinks he’s about to be killed, but it turns out to be this other thing that sits within Alpha’s animalistic philosophy; it’s the way she sees exactly who Negan is. She’s not wrong about him being a crass man. Negan being Negan thinks, ‘Well, it’s an opportunity for me!’ It came together in this organic and fun way where the writer had a great take on the relationship from the comic book. We had a fun time coming up with a way to show this to our audience in a way that’s safe for basic cable but also still surprising.” 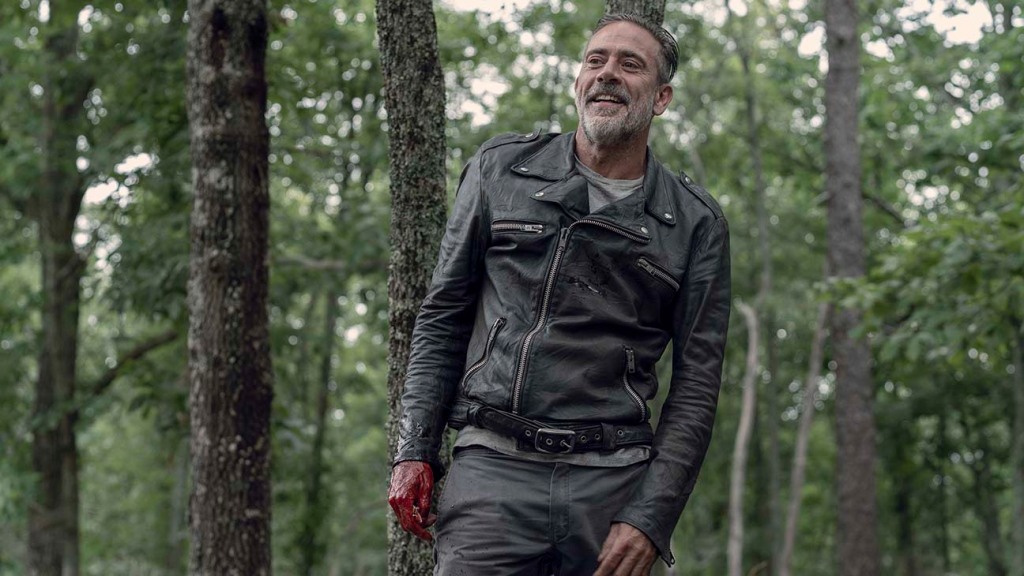 A version of this scene plays out in the comics — final warning, major spoilers are ahead — as Negan joins the Whisperers for a time, with an outspoken adoration for Alpha. The two finally achieve some semblance of intimacy, with Alpha confessing the fear she feels for her missing daughter. In the moment, Negan exposes the vulnerability with a quick flash of a knife, slicing Alpha’s throat wide open and severing her head. The reason: he plans to bring Alpha’s head back to Alexandria as a sign of his loyalty.

Whether or not a similar moment is still waiting in the TV show’s future remains to be seen, though it’s been heavily speculated that Negan is only in the Whisperer camp as a means of helping the Alexandrians. At the least, Alpha’s comic book fate gets a nod in “Squeeze,” when Negan talks about praying mantises decapitating their lovers during sex. If that was an outright nod to the comics, Kang is keeping coy.

“There are comic book nods, as well as some things that are unique to the show,” she says about the scene. “But I think the comedy of it is very true to Negan. He has a very funny point of view. I love how he handles it.”