You would think Negan (Jeffrey Dean Morgan) has more pressing concerns than the well-being of his baseball bat. But you would be wrong.

In the latest episode of AMC’s zombie drama The Walking Dead, “The Key,” Rick Grimes (Andrew Lincoln) has Negan against the ropes during an extensive action scene involving a car chase, a whole lot of walkers, a whole lot of fire and one heck of a role reversal: Rick gets his hands on Lucille, the barbed-wire-wrapped baseball bat Negan has used to kill countless individuals, Abraham (Michael Cudlitz) and Glenn (Steven Yeun) included.

'Walking Dead': Who Is That Mysterious Stranger?

Negan remains relatively calm throughout the sequence, until he realizes Rick is in possession of Lucille. It’s little wonder that it causes him to snap: Negan previously told Father Gabriel (Seth Gilliam) and viewers alike the true story of Lucille, the name of Negan’s wife from the pre-apocalypse, who died from cancer. When she turned, Negan was unable to put her down. Somewhere along the way, the king of the Saviors came into possession of the baseball bat, named it after his dearly departed wife and the rest is history.

Actually, the rest is history in the making, because Lucille’s adventure is far from over — at least if the show sticks to the Walking Dead comic book script. Major spoilers from the source material lie ahead. 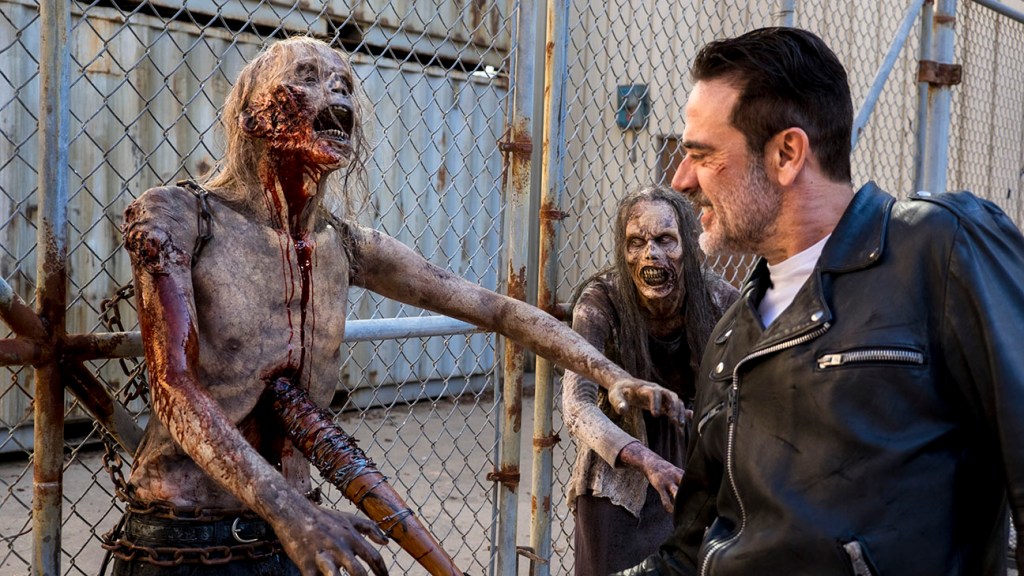 In the comics from Robert Kirkman and Charlie Adlard on which Walking Dead is based, Negan loses the war against Rick. Instead of killing him off, Rick throws Negan in prison, where he rots for years while Alexandria and the surrounding communities flourish in the outside world. For “her” part, Lucille is just fine in the outside world as well, in the possession of a new owner. It’s not Rick who wields the bat in the comics, as he did in this most recent episode of the TV series. Instead, Dwight (Austin Amelio) becomes Lucille’s newest bearer, his weapon of choice as he leads the Sanctuary in an alliance with Alexandria.

Eventually, a new threat emerges that brings Negan out of incarceration: the Whisperers, a group of survivors who wear flesh suits in order to blend in with the dead. War breaks out between Alexandria and the Whisperers, and Negan joins the fight. In the midst of the battle, Dwight tosses Lucille back to Negan, who gleefully wields it once more — and never again. The bat breaks in the heat of the conflict, crushing Negan’s spirit just as he had once used Lucille to crush so many skulls.

'The Walking Dead': What to Expect From the Next Big Battle

After the war, Rick grants Negan his freedom, albeit under the condition of permanent exile from Alexandria and the other communities. While on the road, Negan finds a new baseball bat and a fresh supply of barbed wire. He’s about to create Lucille 2.0, when Maggie (Lauren Cohan) tracks him down. She’s moments away from avenging Glenn, but when she sees Negan for the hollow husk of a man that he is, Maggie decides it’s better to leave him alone to live out his miserable life.

Shortly after Maggie’s departure, Negan kills once again. The victim: Lucille, or the bat that could have become her successor. He decides to abandon the would-be weapon, tossing it in a blazing fire — a fate that now feels loaded with poetic irony, given the image of a fiery Lucille we all just saw in “The Key.” Through the latest issue of the comics, this is our most recent image of Negan … though it certainly won’t be our last.

Has 'Walking Dead' Revealed "The Key" to the Next Big Death?

How do you expect the fate of Lucille to play out in the future of the series? Let us know in the comments section and keep checking THR.com/WalkingDead for more season eight coverage.

'The Walking Dead': What to Expect From the Next Big Battle