Continue to The Hollywood Reporter SKIP AD
You will be redirected back to your article in seconds
Skip to main content
November 14, 2016 12:05pm
Logo text

[Warning: This story contains spoilers for season seven, episode four of AMC’s The Walking Dead, as well as the comics on which it’s based.]

While the Walking Dead television show and comic books often travel along different paths, the two versions of the same story intersected in a big way in the latest episode.

The episode, called “Service,” features Negan (Jeffrey Dean Morgan) and the Saviors visiting Alexandria for the first time. Over the course of the episode’s 90-minute runtime, Negan successfully secures the entirety of the Alexandrian arsenal, repeatedly shames the community’s residents, including Rosita (Christian Serratos) and Olivia (Ann Mahoney), and leaves Rick (Andrew Lincoln) with unspeakably vulgar words. Many of these acts and others are straight from the pages of Robert Kirkman and Charlie Adlard’s The Walking Dead #103, an issue that sees Negan flexing his muscles within the walls of Alexandria. Here’s how it plays out:

'Walking Dead' Star Christian Serratos: Rosita Is on a Warpath

• As with the show, when Negan first arrives at Alexandria’s gates, he’s not immediately recognized. The sultan of the Saviors is simultaneously incredulous and irritated about the impression he’s made, or lack thereof. 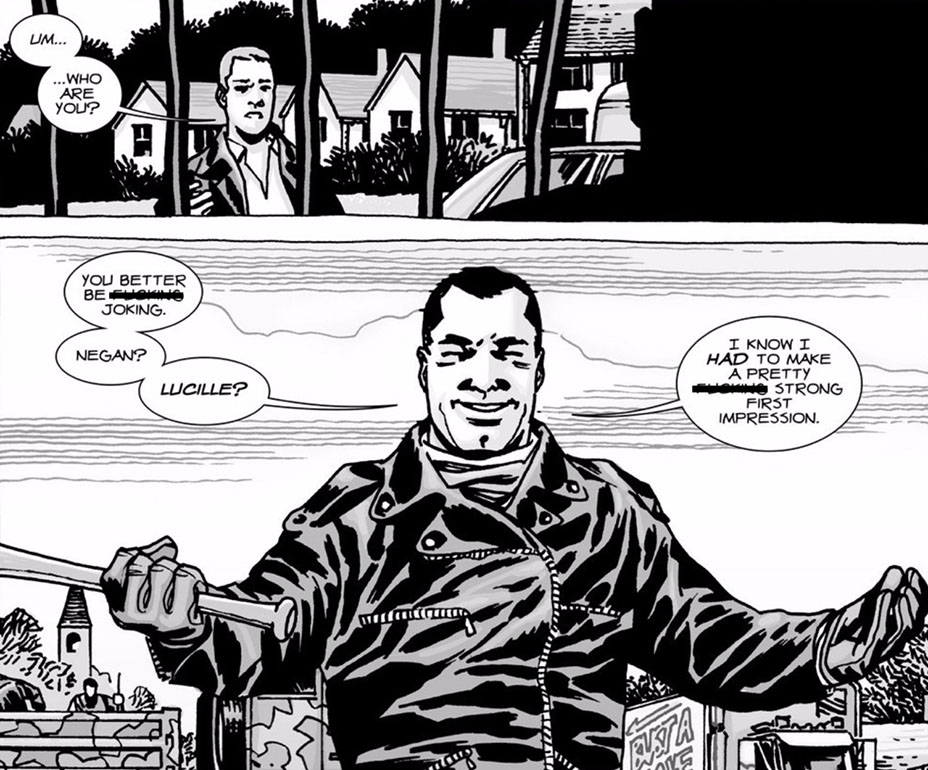 • Negan subsequently gives the Lucille treatment to a handful of walkers approaching the gate.

• When Rick reaches the gate, he hesitates before opening up for Negan. Naturally, Negan’s patience is wearing thin. 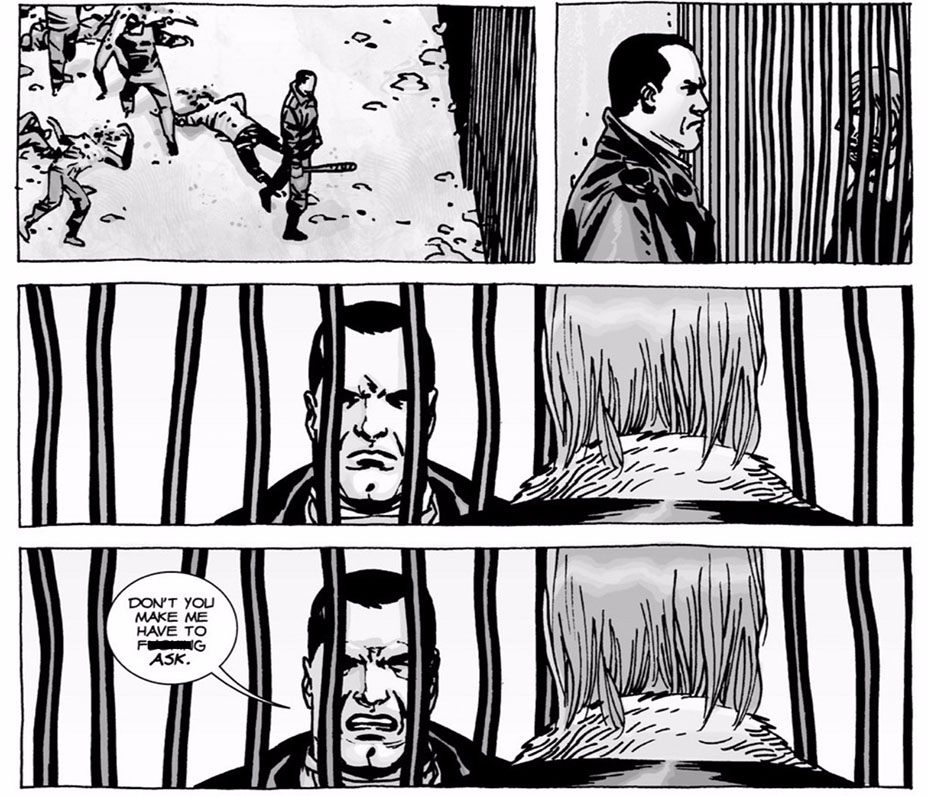 • Once inside the walls, Negan brags about providing “service,” and even makes light about killing Glenn (Steven Yeun). On the show, he references Abraham (Michael Cudlitz) instead of Glenn. 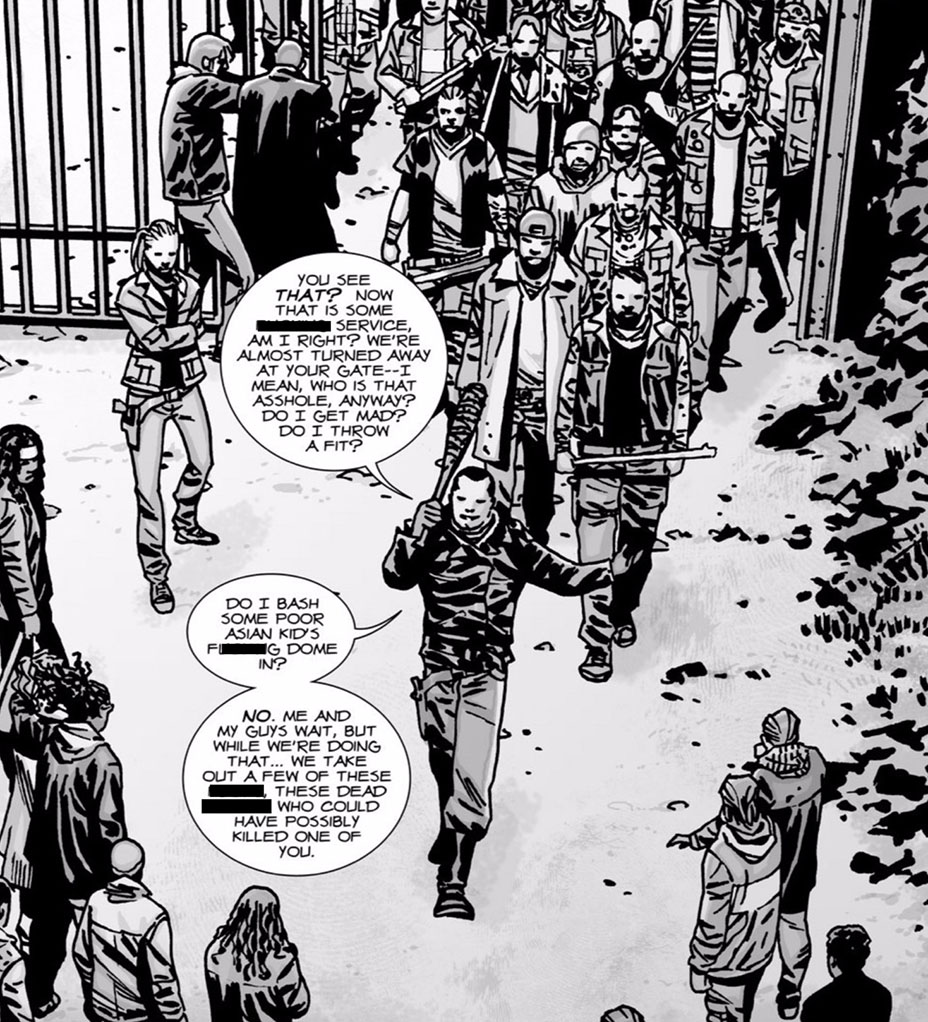 • Negan proceeds to hand Lucille over to Rick, making him hold the baseball bat for the rest of his visit in Alexandria.

• Negan continues to insist that he’s a reasonable man when given the chance, and demands a “thank you” from Rick, just as he does on the show.

• Rick’s son Carl (Chandler Riggs) stands up to Negan in the comics, albeit without a gun in hand. 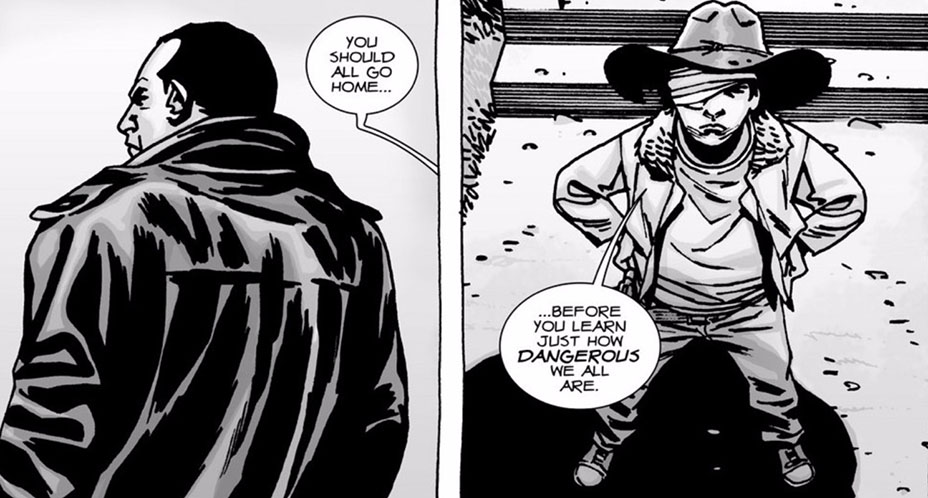 • But the gun drama exists in the comics. Instead, it’s Denise (Merritt Wever), still alive at this point in the comics despite her death on the show, who holds a gun against the Saviors.

• As he does on the show, Rick does his best to disarm his fellow disgruntled Alexandrian.

• Rick even holds a meeting in church to hammer home the new world order for his people; however, it occurs one issue earlier, in The Walking Dead #102.

• On the show, Rick and Michonne (Danai Gurira) have a disagreement about how to survive in Negan’s world. In the comics, a similar argument breaks out between Rick and Andrea, his girlfriend in the source material. 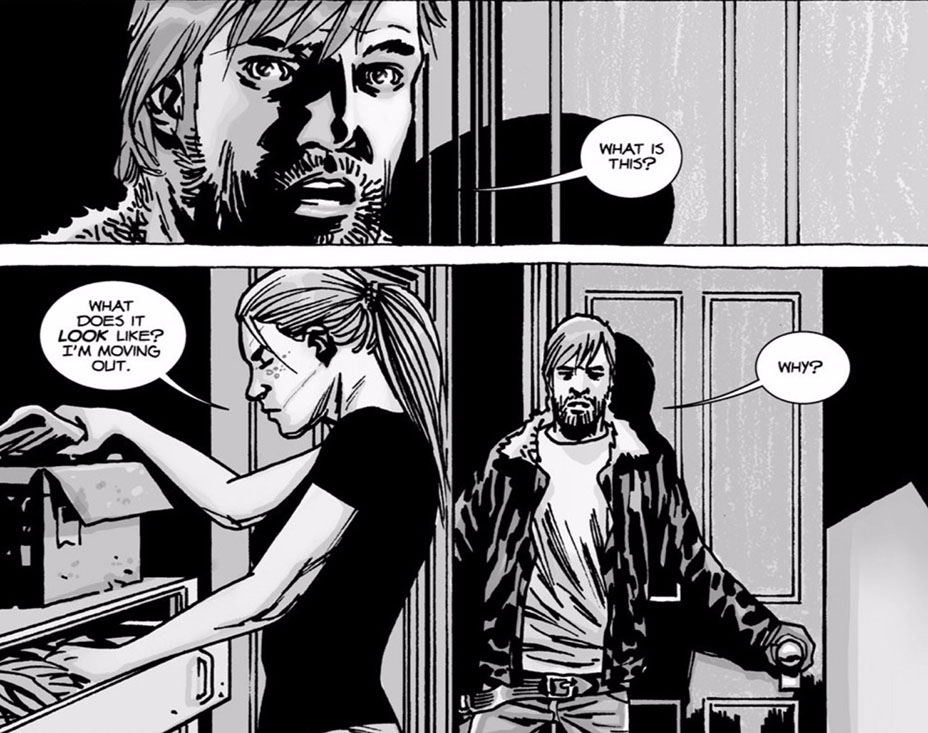 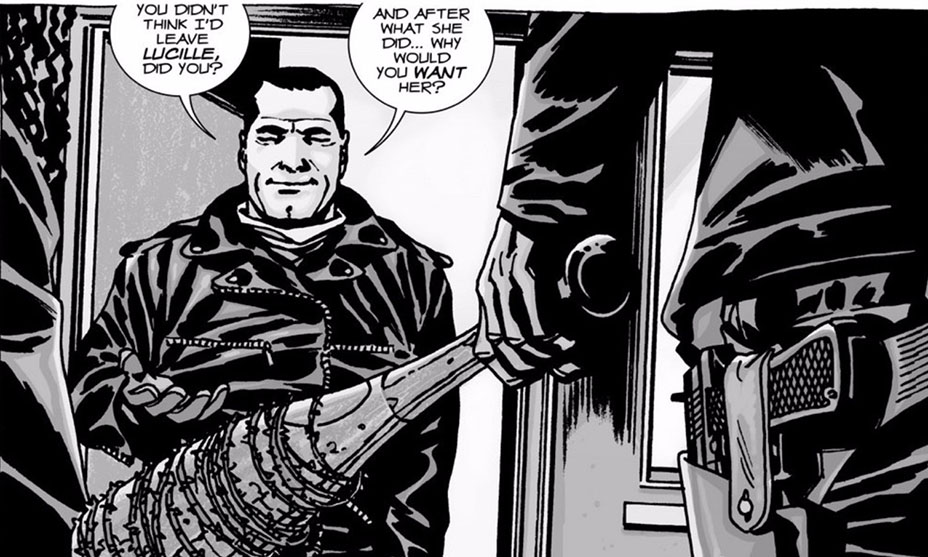 • And as he does on the show, he leaves Rick with some incredibly vulgar remarks: 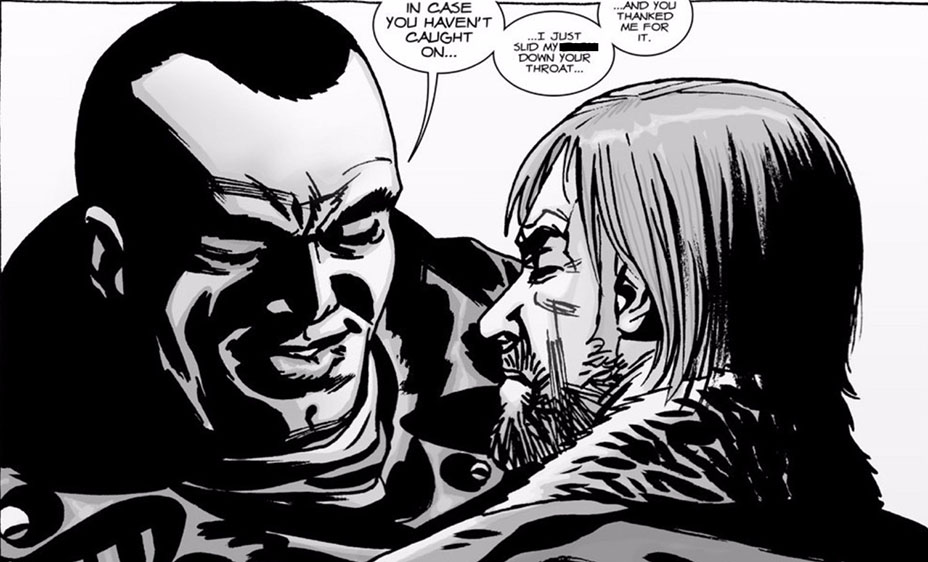 • Here’s one major difference between the show and comics’ Negan visits. In the show, Rick is completely subservient to his new leader. But in the comics? Not so much:

Will Rick and his secret anti-Negan agenda wind up on the show? It’s inevitable at some point — the only question is whether or not Rick is quietly building his resistance already.