As AMC officially begins its expansion plans for The Walking Dead, the cable network has signed two key castmembers to what sources describe as groundbreaking multiple-year “franchise/universe” deals. Meanwhile, breakout star Danai Gurira is in negotiations with AMC for a similar pact.

Fan favorites Norman Reedus (Daryl) and Melissa McBride (Carol) — who both started with the zombie drama in season one — have signed rich new deals with the cable network. Sources say the pacts will cover three years of the franchise as a whole, meaning if their characters are written off of the flagship and relocated to another property in the Walking Dead franchise — or depart completely — they would continue to get paid.

Sources say Reedus — who also hosts and exec produces AMC’s unscripted motorcycle series Ride With Norman Reedus — will make $350,000 per episode on top of additional guarantees and advances in a deal that sources say could be worth anywhere from $50 million to $90 million. McBride’s deal, which is said to include a sizable pay bump, will see the actress score an estimated $20 million over three years. Gurira, meanwhile, is currently negotiating a new deal with AMC that could be complicated by her status as a breakout actress. Reps for Gurira, Reedus and McBride all declined comment.

The new pacts are described as groundbreaking in that they stretch beyond traditional series/overall deals and allow both Reedus and McBride — who started as recurring in season one and have been regulars since season two when they made $8,500 per episode — to move freely among new projects in The Walking Dead universe. That expansion, which is being overseen by chief content officer Scott M. Gimple, started Sunday when AMC spun-off leading man Andrew Lincoln — whose Rick Grimes has been the focus of both the comic book source material and the series itself — to a trio of big-budget, feature-length movies to air on AMC. The pacts for Reedus and McBride allow both to move freely among the franchise as Gimple charts a course that includes revisiting characters who have come and gone with anything from new series, digital offshoots and miniseries, among others.

“The deals that we made for Norman and Melissa are franchise deals. Our deals with Norman and Melissa allow us the flexibility to either move them or use them in more than one place, depending on what seems creatively right to Scott and to his partners,” AMC programming president David Madden tells The Hollywood Reporter.

“We do look at this as a universe where we’re trying to expand into as many different places as the show fits. We think this is a franchise that could live across formats. So we want to do it carefully; we want to be strategic; we want to try to do it right. But there is a multi-year plan that could include additional series, digital content and specials.”

Gurira, meanwhile, officially joined the series in season three as iconic katana-wielding badass Michonne. As Lincoln segues to the TV movie side of The Walking Dead, Gurira’s Michonne — Rick’s love interest — becomes the heir apparent leader on the flagship. Lincoln was No. 1 on the call sheet, followed by Reedus (the show’s new male lead), Lauren Cohan (whose Maggie also exited during Sunday’s episode as the actress had her own salary standoff with AMC), Gurira and McBride. Since arriving on The Walking Dead, Gurira has become a breakout star both on stage and screen, with credits including Black Panther and other Marvel Cinematic Universe features, and writing the Tony-nominated play Eclipsed.

“She has been very vocal about saying that she loves the show. We love Danai; we love that character. Right now, she’s got a lot of opportunities and she needs to weigh what she feels is best for her. But we certainly would want her on the show as long as she wants to be on it,” Madden says. “We really want her to stay. She is an incredibly valuable character and I’m really hoping she stays. Obviously, the lesson of Andy is that the show can survive anybody’s departure if need be but that’s not our goal. The goal is to have Danai continue on whatever basis she can make work, given the other things that she has going on in her life.”

Asked about how much longer she envisions herself on The Walking Dead, Gurira stopped short of providing a timeframe. “I can’t share that at this moment,” she told THR at the season nine premiere in late September.

Still, while Lincoln’s AMC Studios-backed series of feature-length TV movies will begin production next year with Gimple at the helm, he insists that the flagship series will remain the top priority as it awaits its season 10 renewal with showrunner Angela Kang at the helm.

“Seeing other characters from the show in other ways is absolutely a possibility. But The Walking Dead will remain The Walking Dead and telling great stories with Carol, Daryl and Michonne. So that is the priority with those characters,” Gimple told THR.

Reedus is repped by CAA, Brillstein Entertainment Partners and attorney Karl Austen, who is said to have led the renegotiation. McBride is with UTA and Austen. 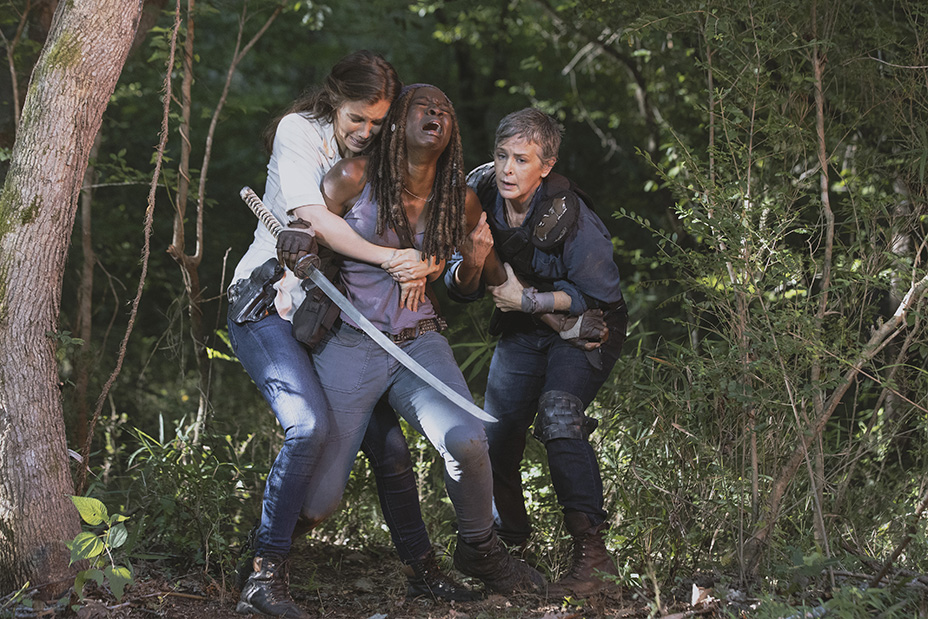