[This story contains spoilers through season eight, episode 13 of The Walking Dead, called “Do Unto Others.”]

In the current season of AMC’s The Walking Dead, most eyes are firmly affixed on the future. But as is often the case in this particular zombie apocalypse, it’s worth maintaining a view of the past.

The latest episode of the violent drama sees both the road ahead and the road behind coming together through an unexpected vessel: Carol Peletier, played since season one by Melissa McBride. It takes some effort to recall the period in this show’s history in which Carol wasn’t the most accomplished and capable soldier on the field: her Sarah Connor moment came during season five’s raid on Terminus, but that’s disregarding the exceptional levels of strength she demonstrated in earlier moments, like the devastating decisions she had to make in season four’s “The Grove,” the time she had to spend hiding in the prison following the zombie attack of season three’s “The Killer Within,” and the resilience she displayed following her husband’s death in season one.

Then, of course, there’s the biggest moment in her life to date: the death of Sophia, zombified in season two. After being separated from the main group during a walker assault, Carol and friends spent a good half-season searching for the young girl, only to find that she was dead and rotting away in her new life just a few strides afield in the Greene family barn. It was a brutal moment, one that forever changed Carol and put her on the path toward becoming the one-woman wrecking crew fans know and love.

But as indicated earlier: history has a way of repeating itself on The Walking Dead. Tara (Alanna Masterson) is always going to have a grudge against Dwight (Austin Amelio) for killing her girlfriend, for instance. The letters Carl (Chandler Riggs) wrote before his untimely death will factor into the vision of the future he outlined for Rick (Andrew Lincoln) earlier in the season, for another. Morgan (Lennie James), one of the most enduring characters in Walking Dead mythology, exemplifies the idea of “the more things change, the more they stay the same” better than almost anyone: he was stable, and then he a became an unrestrained killer, and then he mellowed out, and then started unrestrainedly killing people again; rinse and repeat.

During Sunday’s hour, another example emerges in the form of Carol, connected through Morgan. Moments after having to kill Tobin (Jason Douglas), her former lover, Carol has just learned that another person she loves is missing: Henry, the staff-wielding boy from the Kingdom, who has had vengeance for his brother on the mind for weeks. In the middle of the latest episode, “Do Unto Others,” Henry tried to act on his bloodlust, only to find himself trapped in a prison surrounded by zombies. His next steps and exact fate remain unclear, though Carol is about to pound the pavement in search of the young boy. 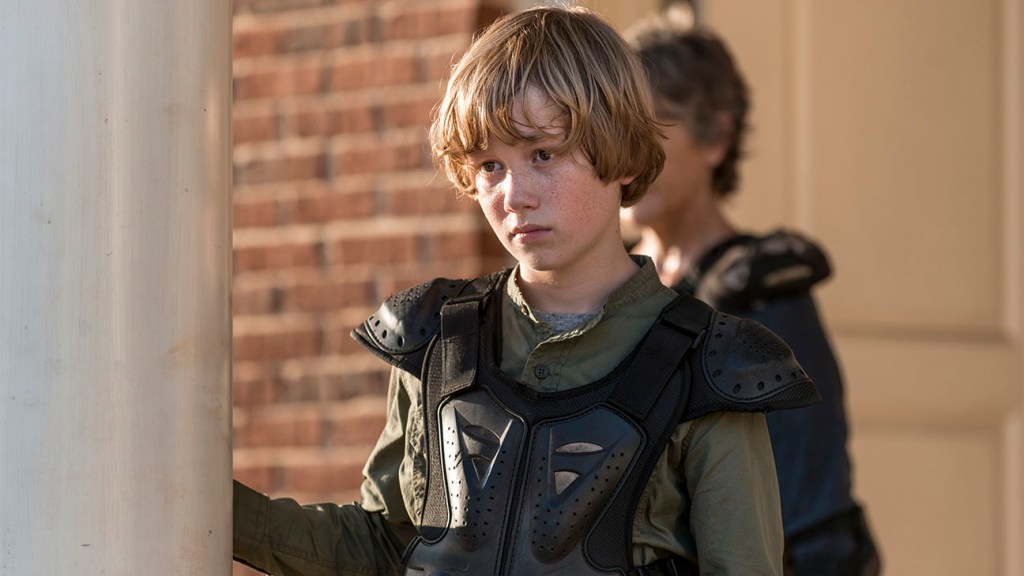 • In both cases, the young person in Carol’s life went missing.

• In both cases, this person went missing very soon after Carol lost either a spouse or lover: her abusive husband in the first context, and Tobin in the second.

• In both cases, Carol ended these men, whether it was brutally bashing in her husband’s not-yet-zombified brains, or putting down a monstrous Tobin before he could inflict further damage on anyone else.

• In both cases, the heat of an action-packed moment left children’s fates in doubt.

• In both cases, the young child’s zombified remains may be no further than right around the corner, hiding in plain sight.

• And the kicker: in both cases, these children were played by someone named “Lintz.”

That’s right: it’s an easily forgotten fact that the actor who plays Henry on The Walking Dead is Macsen Lintz, the younger brother of Madison Lintz — aka the young performer who played Sophia, Carl’s daughter, once upon a time. On that level alone, history is very much repeating itself through Carol’s storyline, and it’s certainly not without reason: season eight is an homage to some of the earliest and most notable events in Walking Dead history by design.

'The Walking Dead': How the 100th Episode Honored its Past

“It really gave us an opportunity to show the audience how far we’ve come, to pay tribute to the cast, every single castmember who has been on the show from the beginning and every crewmember who has worked on the show, to go back to where it all started,” executive producer, special effects mastermind and frequent director Greg Nicotero previously told The Hollywood Reporter at the start of the season. “There are these iconic moments that drew the audience in and held their attention when we premiered on Halloween so many years ago [in 2010]. This was an opportunity to really thank the fans and give them something unique and special.”

That unique and special something swirling around Carol’s life sadly has a feeling about it that’s decidedly not unique: the sensation of once again losing a child to the chaotic whims of the apocalypse. Will Carol’s new Sophia parallel have a happier ending than the first go around? One certainly hopes so — but the fact that Morgan, who is also very connected to Henry, is about to leave the Walking Dead flagship in exchange for Fear the Walking Dead sadly suggests otherwise.

What are your predictions for the rest of Carol’s story this season? Sound off in the comments below and keep checking THR.com/WalkingDead for more coverage.