The hour of Rick Grimes’ release draws near.

Andrew Lincoln’s final episode of The Walking Dead, airing Nov. 4, marks the end of an era. Over the course of eight full seasons and change, Lincoln stood at the center of AMC’s world-famous horror franchise, bringing the iconic character of Rick to haunting life through blood, sweat, tears — and so much beard.

Due to the nature of the Walking Dead universe (which started and continues with creator Robert Kirkman’s comic book series), men and women come and go with alarming regularity: here one day, gone in a bloody heap the next. As much as many castmembers may be missed, there’s no denying the enormity of losing Lincoln as Grimes, the face of the franchise since its live-action debut in 2010.

Did 'The Walking Dead' Just Reveal How Andrew Lincoln Will Exit?

As Lincoln leaves, it’s worth taking stock of the man’s best work across more than 100 episodes of The Walking Dead. Read on for one last look at the actor and character’s greatest hits, in chronological order. 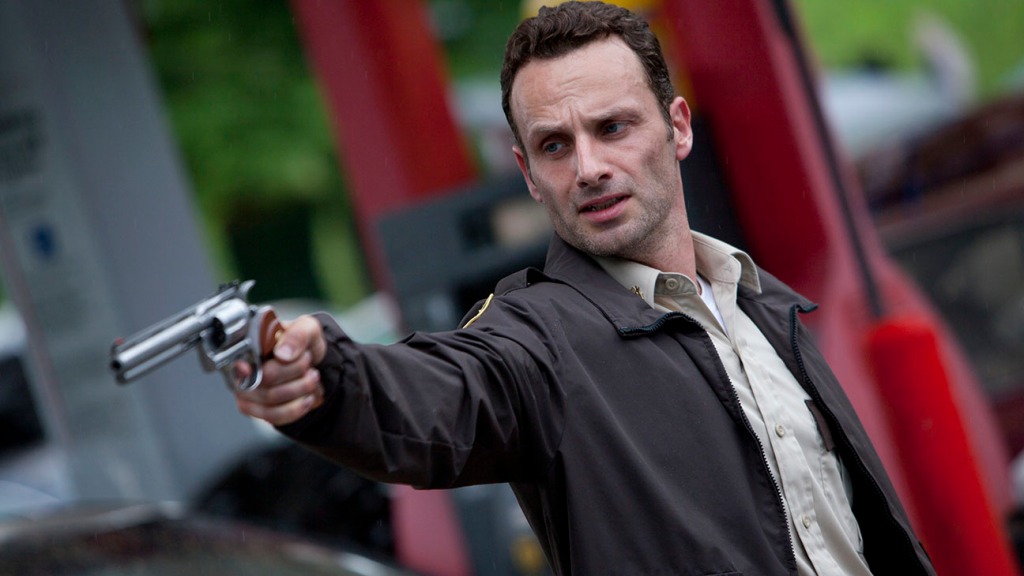 Directed by Frank Darabont and resting on the shoulders of one actor’s demanding performance, the very first Walking Dead episode establishes a chilling voice that resonates with viewers immediately. Without Lincoln’s work in this first outing, there’s simply no way the opening moments of Walking Dead land with such impact. Picking one standout moment from the pilot isn’t possible. Is it Rick’s first encounter with the dead, a young girl in a parking lot? Is it his nervous stroll down an abandoned hospital hallway, toward a set of throbbing, locked doors? His scenes with Lennie James as Morgan? The visceral and emotionally brutal Bicycle Girl sendoff? The ill-advised stroll through Atlanta? Truly, take your pick. More than almost any other hour of the series, “Days Gone Bye” is a Lincoln showcase like no other. 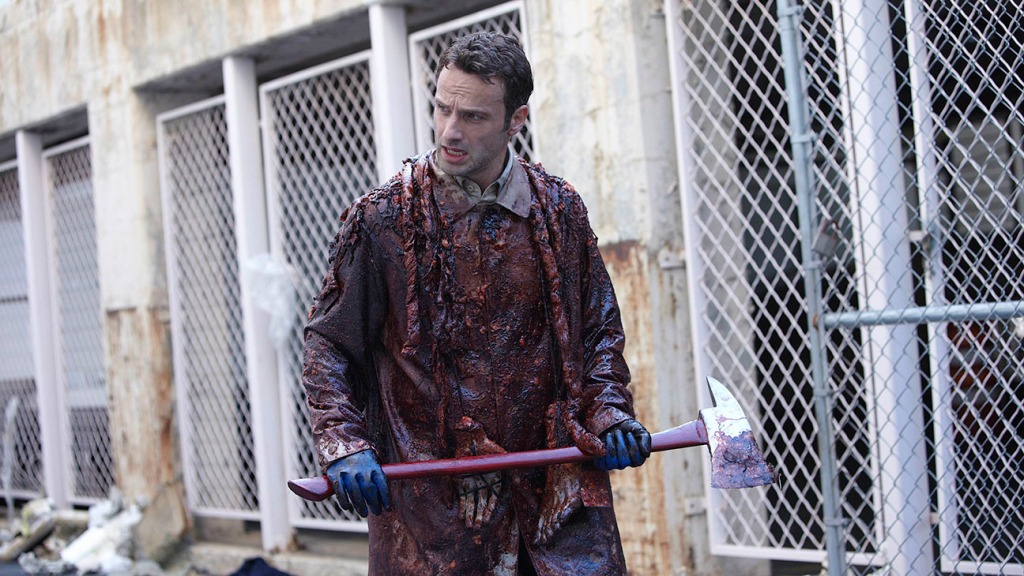 The series’ second episode is yet another standout for Lincoln, and perhaps even more importantly, a spotlight on Rick’s mad scientist qualities. When he and his soon-to-be post-apocalypse family are cornered in Atlanta, Rick hatches the brilliant plan to cover himself in walker guts in order to go out and blend in with the dead. It’s an iconic sequence, ripped straight from Kirkman’s comics, and one that provides the framework for so many hair-brained Rick schemes to come. 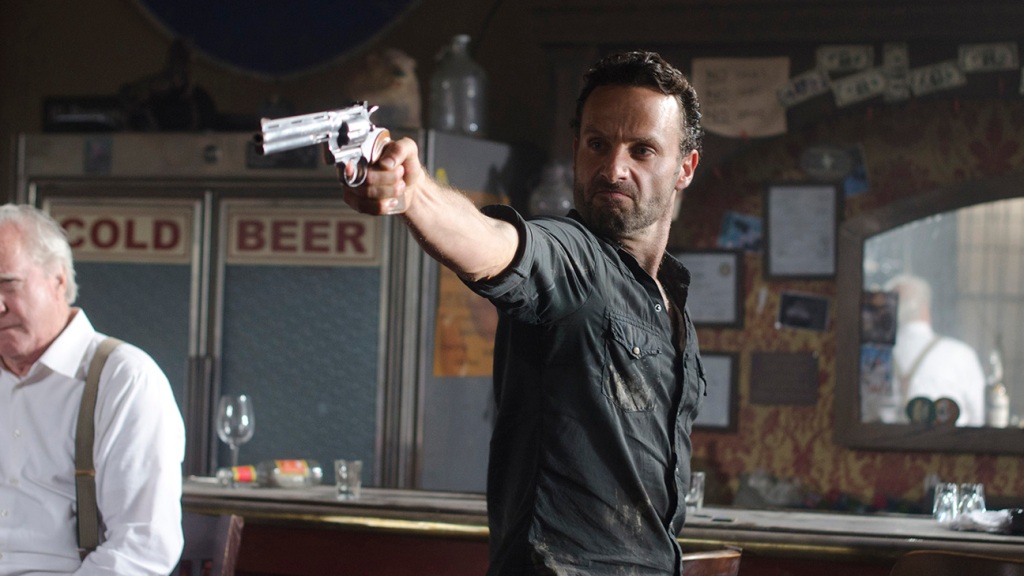 Season two hinged on Rick coming to grips with the new world order. Just how much must one be willing to sacrifice in order to keep people safe? It’s the core argument between Rick and Shane (Jon Bernthal), culminating in the latter man’s death at Rick’s hands. It’s a powerful scene in its own right, but it owes thanks to an even more tense moment a few episodes earlier: Rick, Glenn (Steven Yeun) and Hershel (the late Scott Wilson) trapped in a bar with two deadly strangers — Rick decides to shoot first and ask questions never. It’s the first moment in which Rick veers away from his old moral code, and certainly not the last. 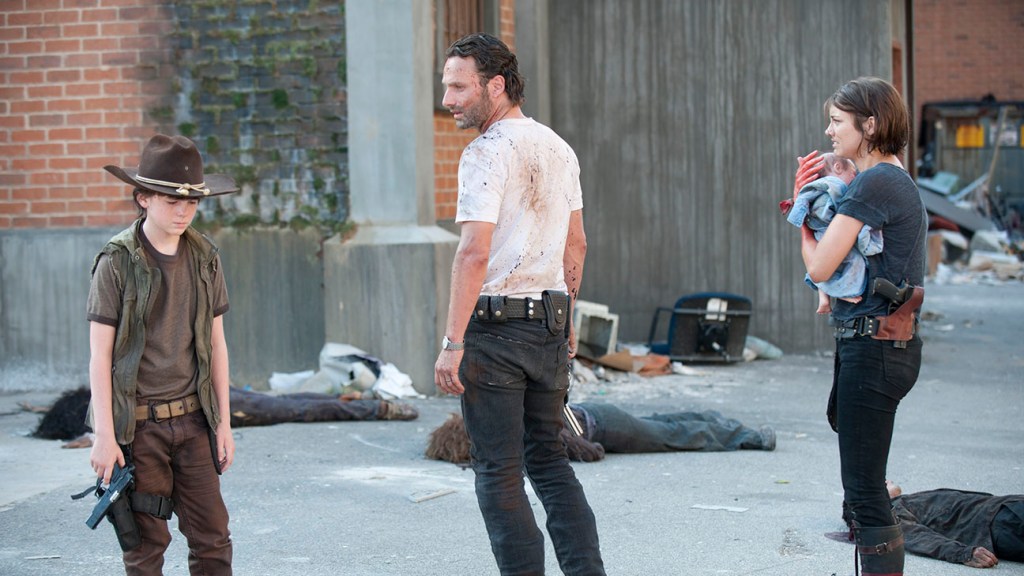 Rick already suffered serious loss through this point in the series, but none more acutely than the death of his wife, Lori (Sarah Wayne Callies). Lincoln’s portrayal of Grimes’ grief upon learning the news became the stuff of many memes, but it also shows the actor’s ability to channel primal emotion in unrelenting fashion. 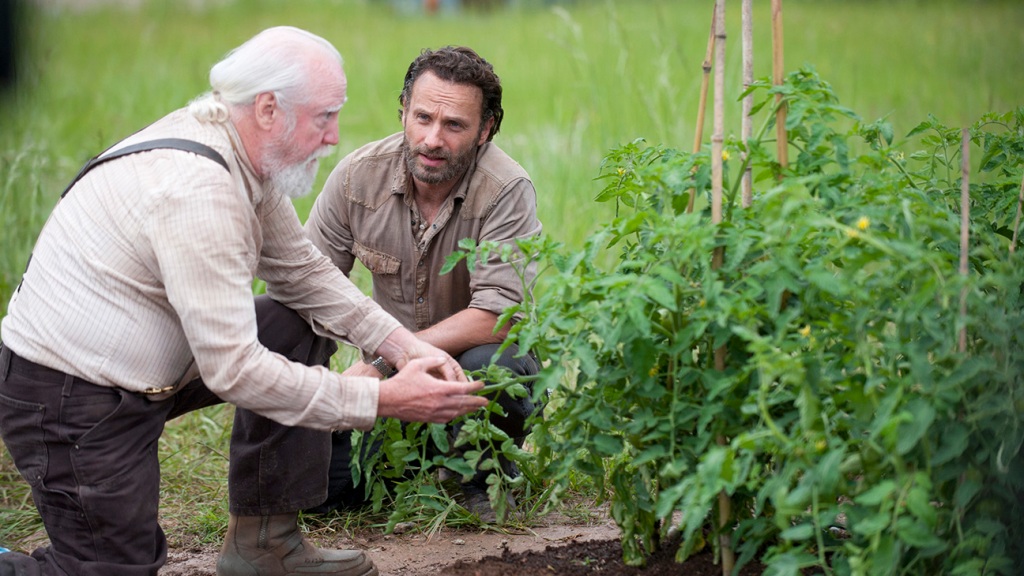 The times Rick is truly at peace are few and far between, such as the period between seasons three and four, when Rick decided to abandon his killer instincts and stick to plowing the prison fields. It’s not the most memorable arc for Rick, but it’s one that paved the way for the person he became shortly before his exit from the series. 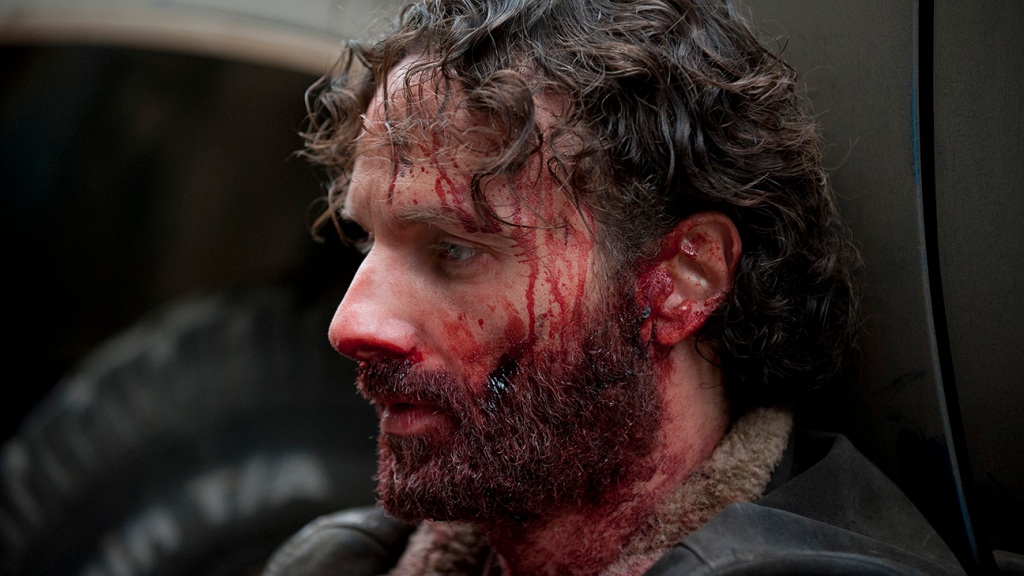 If “Nebraska” marks Rick’s first time crossing the post-apocalyptic Rubicon, then the season four finale truly solidifies his willingness to go for the jugular — literally. It’s perhaps the quintessential moment of Rick violence, as he bites out an enemy’s throat in order to protect everyone he loves. The morning after the act, Rick and Daryl (Norman Reedus) sit down for a talk about friendship and brotherhood; the scene played at the Walking Dead panel at New York Comic-Con in 2018, voted by fans as their favorite Rick moment of the series. 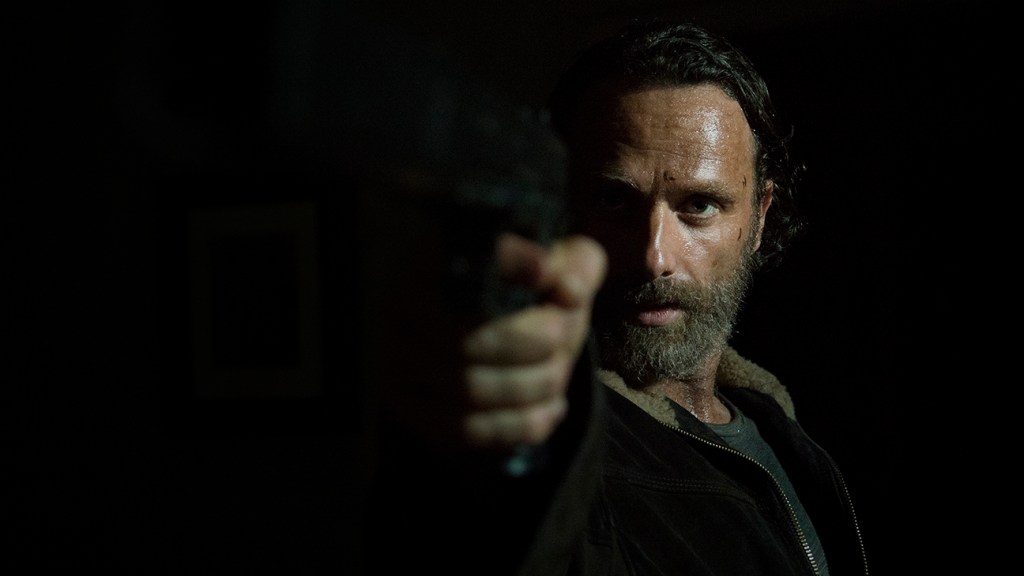 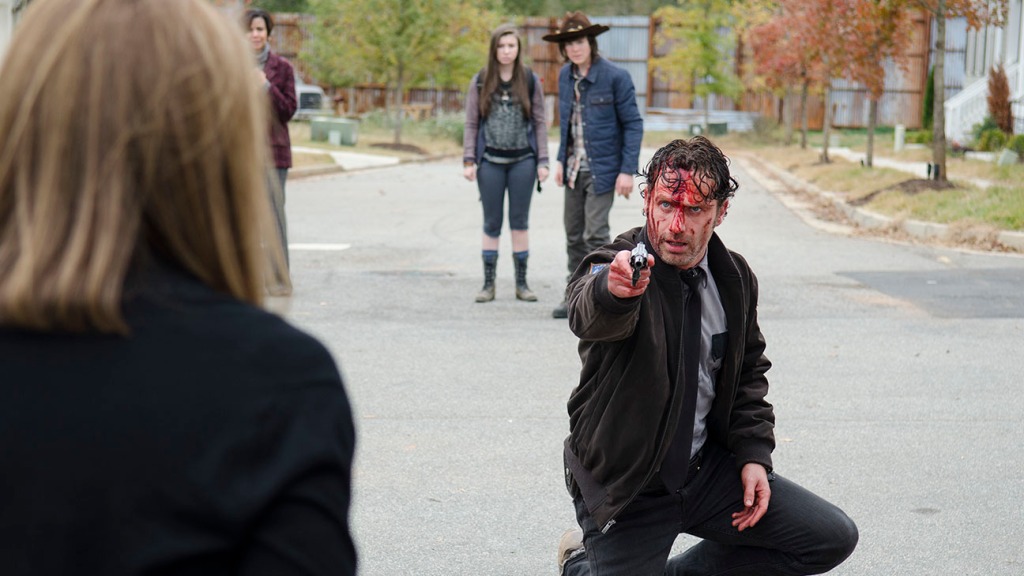 Why is it that some of the most compelling Rick moments feature the man’s face covered in blood? Season five’s penultimate episode is no exception, as a raging Rick barks mad in the streets of Alexandria after a violent brawl with a domestic abuser. It’s the wild and civilization reuniting in ugly fashion, all bottled up in Lincoln’s furious performance. 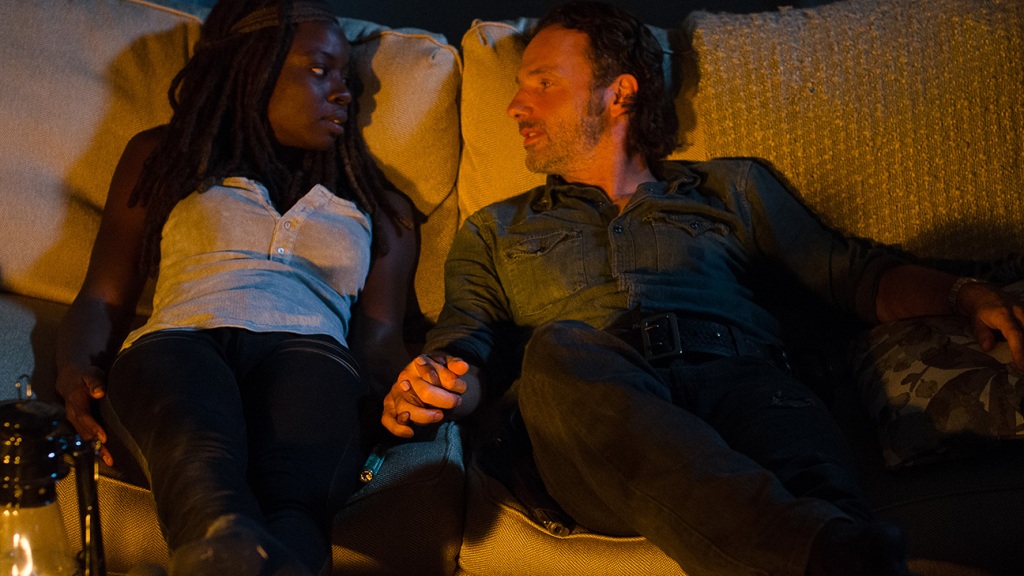 To Rick, Michonne (Danai Gurira) is perfect. Three seasons after Lori’s death, Rick finds love again in the form of his fellow warrior. In terms of the show’s episode order, the timing of the romance is a little bit clumsy; it comes right after Rick watches Jessie (Alexandra Breckenridge) die in Alexandria, even if the hook-up actually occurs some weeks later. That one issue aside, this rare moment of happiness is one worth savoring, and certainly a huge victory for the “Richonne” contingent. 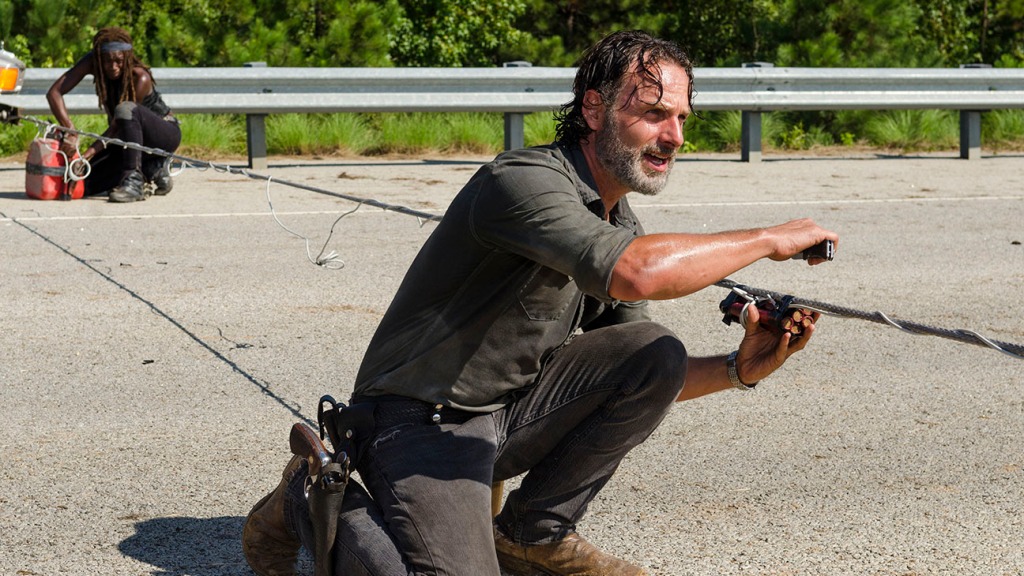 The midseason premiere of season seven is an underrated Walking Dead episode, especially when it comes to Rick. Little more than a half-season past Negan (Jeffrey Dean Morgan) and his big bad introduction, the gang finally learns how to stand against the Saviors, leading to Rick giving an epic speech to King Ezekiel (Khary Payton), as well as leading the charge on a Fast and Furious inspired two-car clotheslining. It’s one of Rick’s best pump-up moments, and one well-worth revisiting for any fan. 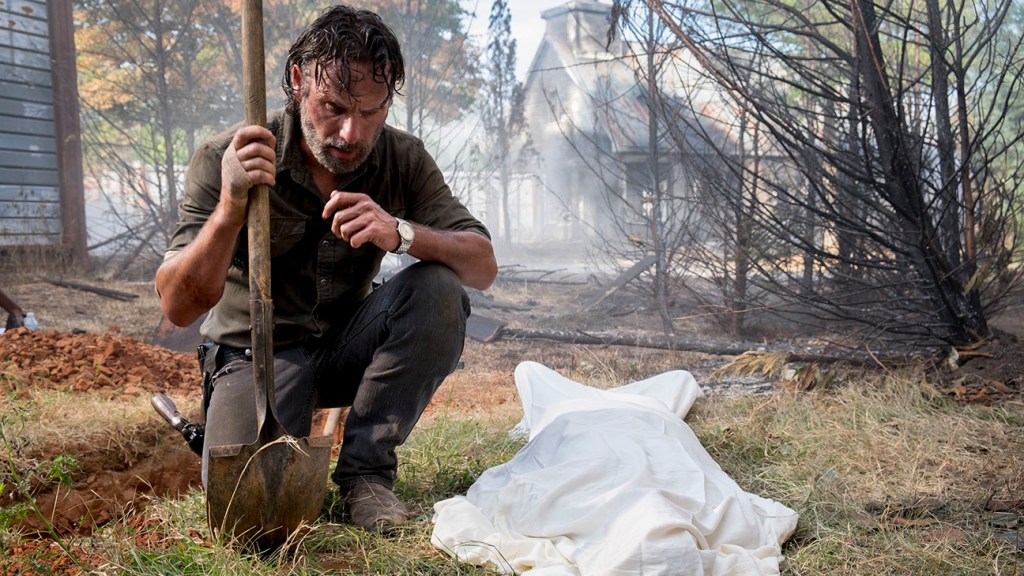 As with “Killer Within,” Rick once again reckons with the death of an immediate family member: Carl (Chandler Riggs), doomed via zombie bite. Unlike “Killer Within,” Lincoln delivers a much quieter take on Rick’s grief, given that he’s allowed to spend a drawn-out period of time with his dying son. It’s a testament to Lincoln’s range as an actor, and the depth he drew out of his time as Rick — a time that’s sadly now at an end.