While not a first for the character, it certainly is given the situation the show’s central hero finds himself in at the end of Sunday’s season seven midseason debut when Rick and his closest friends find themselves surrounded by a heavily armed mystery group.

After King Ezekiel (Khary Payton) declines to help Rick and the Alexandrians take on Negan, the survivors head out to search for Father Gabriel (who made off with a ton of food and supplies for reasons we do not know). In their search, the group winds up encountering a mysterious group of well armed people and Rick, completely surrounded and held at gunpoint, bursts into the most bizarre smile. As a viewer, it’s almost jarring to see the beleaguered former sheriff smile in any situation, let alone one as dire as this. But to hear Walking Dead showrunner Scott M. Gimple tell it, there’s a method to Rick’s seeming madness.

“That smile has a lot to do with the next episode. Rick is caught in this awful situation and you’d think somebody wouldn’t be too happy about it — but all these people aren’t just a threat; they’re an answer,” Gimple tells The Hollywood Reporter. “It’s an interesting story and we don’t leave the audience on pins and needles about it and we go right into what that smile means in the next episode. There’s tough stuff in the next episode but there’s straight up fun and attempts are made at humor from the situation that these characters get in. A whole new world is discovered. It’s a cool turn of the story.”

To hear that this crew is an “answer” should be seen as good news for the Grimes gang, who are desperate for well trained (and armed) soldiers as they prepare to take on Negan and his seemingly endless group of Saviors. Having been turned down by the Hilltop’s cowardly leader Gregory as well as Ezekiel and the Kingdom, the new group could be the first step in building up the numbers required for All-Out War, the story arc from creator Robert Kirkman’s comics in which Rick and Negan finally go head-to-head. 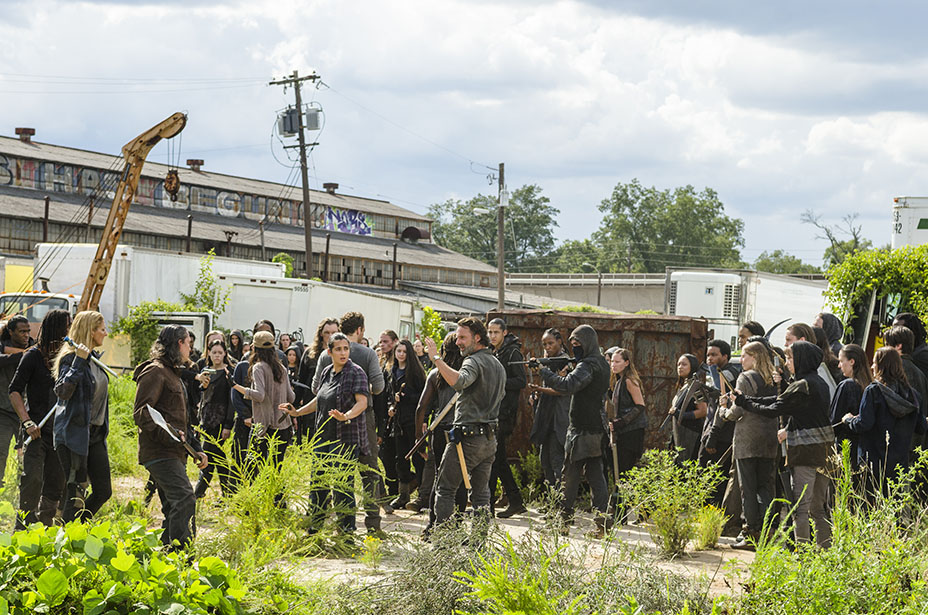 What do you think Rick’s smile means? Sound off in the comments section, below. The Walking Dead airs Sundays at 9 p.m. on AMC. For more Walking Dead coverage, bookmark THR.com/WalkingDead.