[This story contains spoilers for The Walking Dead season 10, episode two, “We Are The End of the World.”]

Samantha Morton’s Alpha, the key villain of the current Walking Dead era, operates in shadows — except when she’s thrust into the spotlight, as in the case of season two’s second outing, “We Are the End of the World.”

Directed by Greg Nicotero and written by Nicole Mirante-Matthews, “We Are the End of the World” centers on Alpha across two different points in time: long ago, when she first met Ryan Hurst’s Beta and recruited him into her cause, and presently, as she and the Whisperers make the choice to return to the Alexandria Safe-Zone and resume their tensions with the likes of Michonne (Danai Gurira), Daryl (Norman Reedus) and Carol (Melissa McBride) — the latter of whom has a major score to settle with Alpha, given the tragic beheading of her son at the end of season nine.

Behind the scenes, Morton’s turn as Alpha has left executive producers struggling with words to describe their delight over the actor’s work; even comic book creator Robert Kirkman told New York Comic-Con attendees that the Harlots star has adapted Alpha in ways he never anticipated when originating the character on the paneled page.

“When Samantha came in, her performance was so chilling,” longtime Dead veteran Greg Nicotero previously told The Hollywood Reporter. “I would get home from shooting and couldn’t wait for people to see what we’re doing. We were talking about the show as if [it] was season one all over again, and we’ve been able to add an entirely new feel to the show through Alpha’s presence and her single-minded understanding of how the world is different now. In her mind, in order to exist in the world of the dead, you have to move among them. You have to be a part of them. It’s such a fascinating aspect that we now have to play with.

For Morton’s part, speaking with THR, she won’t go as far as saying she’s having fun playing Alpha. She uses a different word to describe the job: “It’s certainly intense — and I’m relishing the experience.” Ahead, Morton opens up more about what she’s gleaned from walking among the dead as the Whisperer Queen. 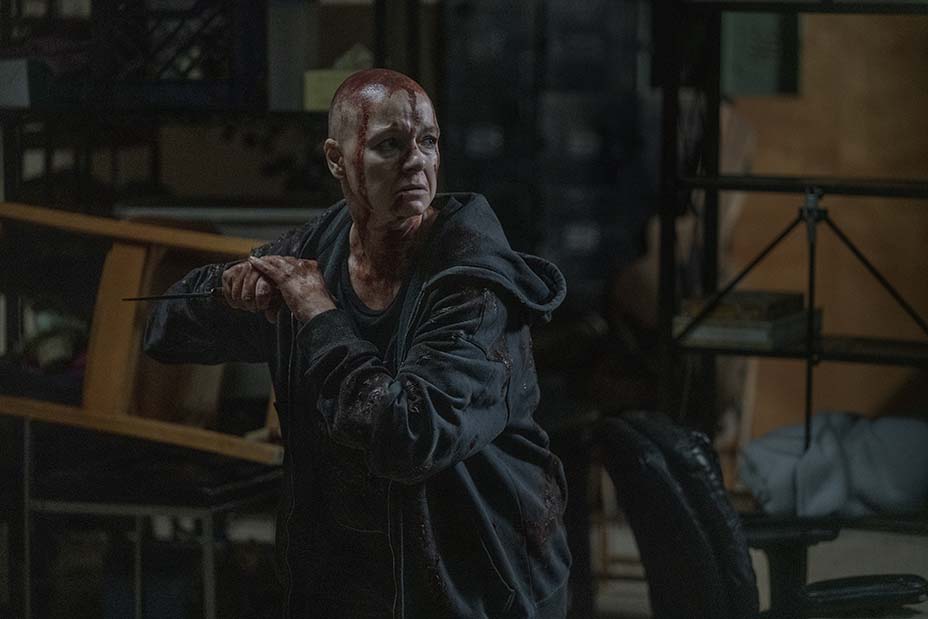 What’s the key to getting under Alpha’s skin — literally, of course, but in terms of tapping into the character?

There’s a difference between acting in a TV show as opposed to acting in a movie. In a movie, you have your scripts straight away. You have the entirety of what your requirements are and what the director and writer want. Privately, you can orchestrate that performance a bit in advance. You can ask tons of questions about how the character got where they got, where they’re going next, what their motivation is… you can do all of that breaking down of a character. Then there’s the spontaneity on the day, reacting to other people and the environment. What’s different for me about doing my first American TV show is getting scripts episodically. You don’t have them all in advance. That’s been a new string for my bow, if you like, or a new acting muscle that I’ve had to acquire. You almost have to have a huge sense of who the character is, but when the episodes come in, you need to be able to as adaptable as you can be; what you’re working with might be very different from what you thought it was.

In that sense, the method fits Alpha: adaptability is key.

Ultimately, there has to be a direction the storyline is going in, and you have to be familiar with it. With [showrunner Angela Kang], she’s been incredibly kind with giving me freedom to develop this character, but also being very clear about educating me and helping me understand what The Walking Dead is all about. It’s a multitude of different emotions from different perspectives. It’s not just one individual’s show. For me, it’s been about navigating the tone and what was required for that, and what I could bring to that, in any way, and also making it my own. And also having to be a strong woman in that, as well. There are so many strong male characters that have been in the show, that when they present a female villain, I didn’t want to be male about it, if that makes sense. I wanted her to be very definitely female. I think Angela has done that brilliantly, as have all of the writers. I hope when each episode comes in and I perform, you can see this mother and this woman as well as this leader of an army — a cult, if you like.

In this episode, you’re playing Alpha across two points in time: her first time meeting Beta relatively early on in the apocalypse, and the modern moment, as tensions with the Alexandrians are once again rising. Does it help clarify the character for you, getting to dig back into the Alpha archives with a flashback?

For me, it starts with the discussions with Angela. Then it moves onto discussions with Nicole and Greg Nicotero, who directed the episode. We sit down with Nicole with a huge amount of questions when the episode comes in. We need to really understand the motivations of these writers and what they’re doing, what they’re trying to get to, and how best we can facilitate that as actors. How do we also bring our own vision of who we see these people becoming? It’s a huge amount of care and collaboration, really, even before you get on the floor.

What’s so brilliant about shooting on film and shooting with Greg is that it’s like you’re making a movie. Not only is it shot on film, but it’s the energy and the pace of the shoot. When we shot episode two, it felt incredibly mysterious. We were allowed time and breathing room with which to tell the story without rushing it. It’s a quick shoot, but when we’re performing it, it’s about taking the beats and moments to find out who they are and why they make the decisions they’re making at the time. As an audience, I think it comes down to how Greg brilliantly frames the scenes — how it’s lit, how it’s edited and the genius behind that.

As for Alpha, I already felt I had a real sense of her at that time, anyway. It was a real joy for me getting to play that. Like, “Oh, it’s nice to share this with the audience, this beat her.” And working with Havana — I had worked with her sister, Scarlet, last year [as Lydia], and she was incredible — I just thought we had great chemistry. I believe Ryan Hurst and myself have brilliant chemistry. We care, we listen, and we want to do our best. I think it shows.

What’s kind of fascinating to me are the little things, like getting to wear a Massive Attack T-shirt, to contemporize these people. We had a new costume designer, Tere Duncan, come aboard this season, who was able to say, “Let’s treat this like a movie. What would she be wearing? Why would she be wearing it?” I felt Alpha has to be very practical. Understanding her background of living in the south as a hunter, understanding the practicality of clothes… Tere felt she should have a hoodie, almost a teenage boy vibe. She’s been so practical in protecting her daughter and surviving that she doesn’t have much stuff with her. She’s just an incredible badass survivor. While her decisions may look awful to someone else, she is not going to at any point do anything that would get in the way of protecting her daughter. 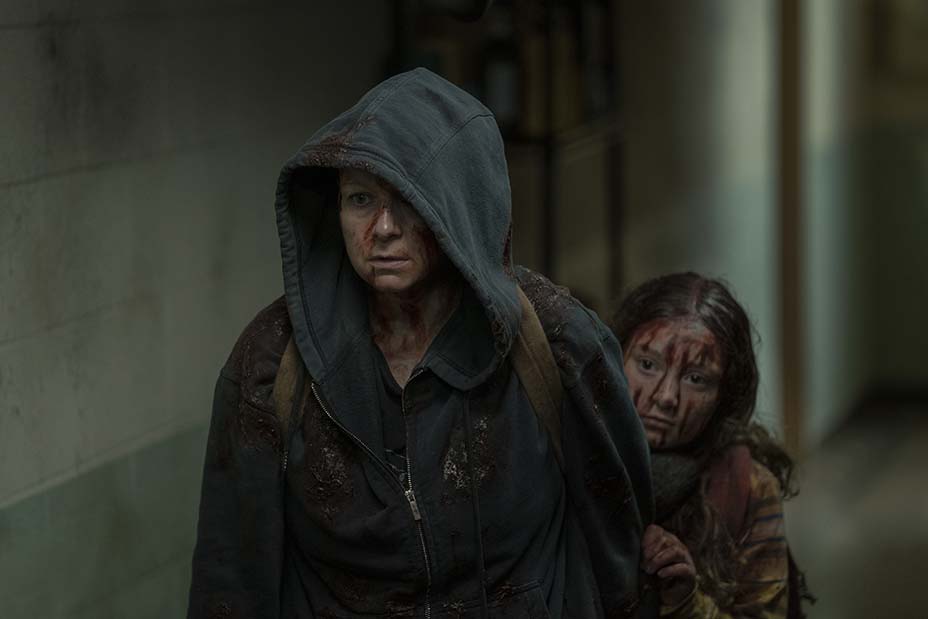 Right now, in the present moment, Alpha and Lydia are completely separate from one another. Alpha is a grieving mother — not in the same way as Carol, whose son Lydia killed, but she’s removed from her own daughter. How does that fuel her psyche and her story this season?

I watched documentaries on cults before taking this part. People who lose their children to religious cults will understand that it’s not just that you lose them physically. You’ve lost their minds. That’s more frightening to Alpha than the physicality. For Alpha, she genuinely believes the way it is in “civilization,” for want of a better word, it really just did not work. Technology didn’t work. The way everyone’s existed to cell phones? It didn’t work back then. Technology was messing everything up, so Alpha wants to live in the woods and take ayahuasca and be feral, in a way. That’s nature. It’s better than the way human beings have been living, whether it’s globalization or capitalism. She’s like a fucked-up eco warrior. (Laughs.) She thinks that at the end of the day, everyone has wars. She just wants to live — weirdly, peacefully, as a Whisperer. You have to remember that: she didn’t start this trouble. She’s just… finishing it. (Laughs.)

And what can we expect from Alpha as she and the Whisperers try to finish the trouble?

It’s quite hard to give a simple answer. We shoot out here for seven months. It’s episodic. I’m still shooting. I had a tough day yesterday, I have to tell you. It was a tough day in a good way. I’m still in it. I’m still shooting it. So it’s hard to say, other than this: it’s incredibly intense, it’s incredibly tough, and nobody gets to rest on their laurels and chill. You have to be the best you’ve ever been every day, because you can’t not be. It’s hard work — in a good way.

'Walking Dead' Season 10: Who Are The New Villains?

Listen to the podcast below for more from showrunner Angela Kang’s look ahead at the greater scope of season ten.