[This story contains spoilers for season ten, episode six of AMC’s The Walking Dead, “Bonds,” as well as Robert Kirkman and Charlie Adlard’s comic books on which the show is based.]

Originally conceived as the zombie movie that never ends, The Walking Dead comic book series defied its core premise in July 2019 with an unannounced final issue, concluding the story of Rick Grimes and his gathered community of survivors once and for all — or for now, at least.

No, AMC’s adaptation didn’t just pull off the same trick, nor is it likely to reach a conclusion anytime in the immediate future. (“We have an awful lot of life left in The Walking Dead — I mean decades and decades of life left,” AMC Networks CEO Josh Sapan said in September.) But showrunner Angela Kang’s version of events did put a key piece of the comic book endgame on the map in “Bonds,” season ten’s sixth outing.

In the episode, Eugene Porter (Josh McDermitt) uses salvaged technology from the fallen Russian satellite to boost the Hilltop’s radio-powered capabilities. In the process, he makes contact with a stranger, a woman who refuses to identify herself but who chooses to engage with Eugene all the same. Their conversation is a pleasant one, even a revealing one if only on some personal and human bases, though the specifics — the location of their respective communities, for instance — are still unknown to one another.

Of course, the location and identity of the person on the other side of the radio is far from unknown to Walking Dead comic book readers. Robert Kirkman and Charlie Adlard’s series first introduced the woman on the other side of the radio in The Walking Dead #152, kicking off a series of scenes that play out much like Eugene and the stranger’s interactions in “Bonds.” 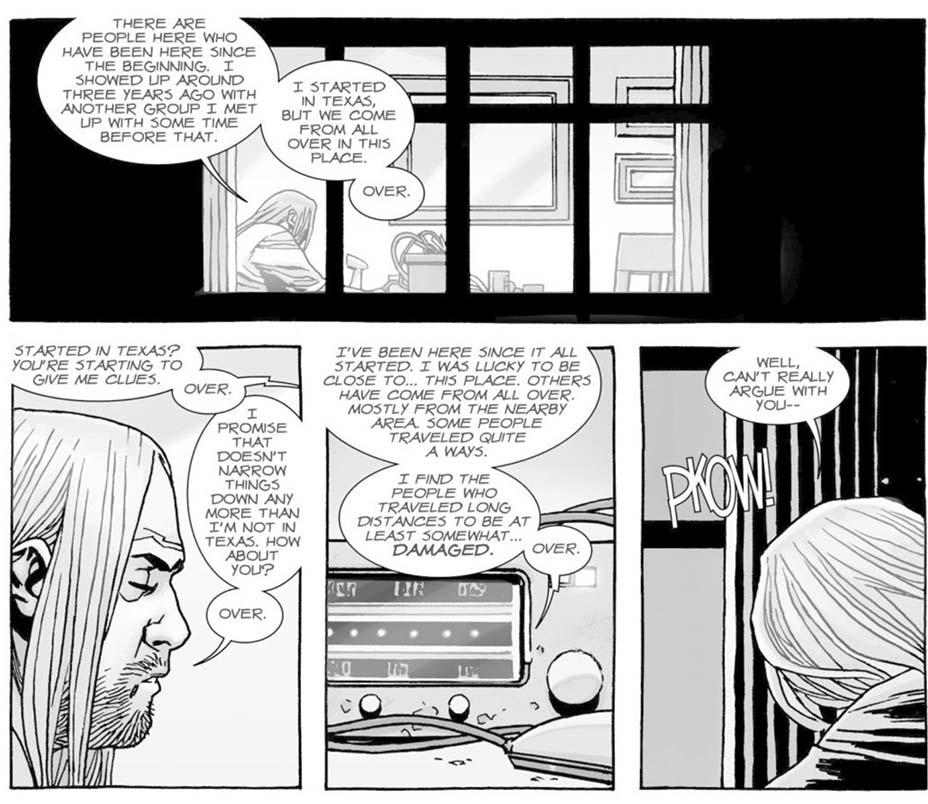 Eventually, Eugene earns enough of the woman’s trust to learn her name and whereabouts: she’s Stephanie, and she hails from the Commonwealth, a sprawling community that’s even more advanced than Alexandria and the Hilltop. It boasts a brand new governor, one who is decidedly less psychotic than the one-eyed villain played by David Morrissey in seasons three and four of the TV series, but it’s a community with its fair share of skeletons in the closet all the same, as evidenced by Stephanie’s first flesh-and-blood appearance in the series: 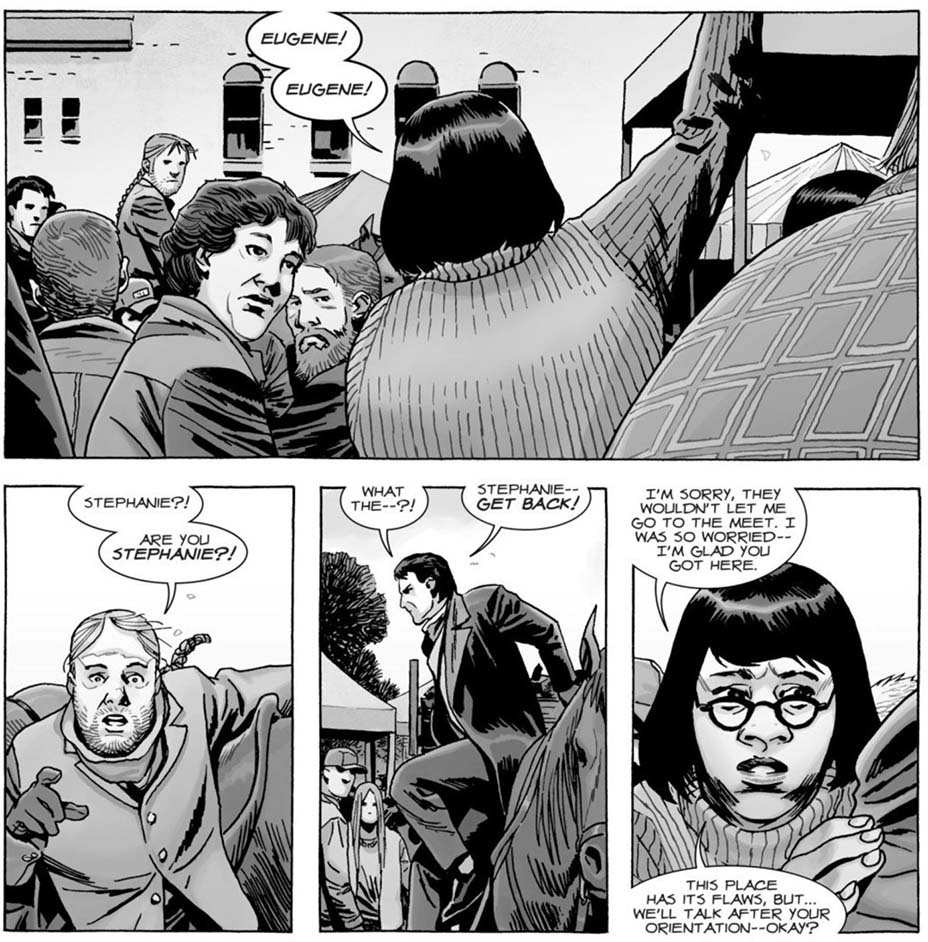 A lot of first world problems plague what otherwise comes across as a post-apocalyptic utopia, and the resolution of these issues informs the final Walking Dead comic book arc. While the series is deep in the throes of the Whisperer War at the moment, the stage is already being set for the Commonwealth storyline — which means, if the AMC drama follows the track laid out by the comics, we’re closing in on the end of the line.

There’s no word on an end date for The Walking Dead, but mapping out the Commonwealth comic arc to the typical pace of the television series, one can imagine a scenario where the AMC adaptation has one or two seasons worth of comic book material to spend before running out or running the risk of stretching things too far. Among the reasons why Kang’s takeover of the flagship series has been so celebrated within the Walking Dead community is the quick and confident pace of the storytelling, cutting through almost a full decade in the scope of a single season; compare that to season six, where more than half of the year spanned little more than a single day, Jack Bauer style. If The Walking Dead aims to maintain the same quality level established in season nine and currently carrying over into season ten, then an endpoint in either seasons eleven or twelve feels like the right call, given the current place in the show’s story relative to the comic books’ story. Besides, who doesn’t want to look out upon Old Man Eugene’s biggest future accomplishments… 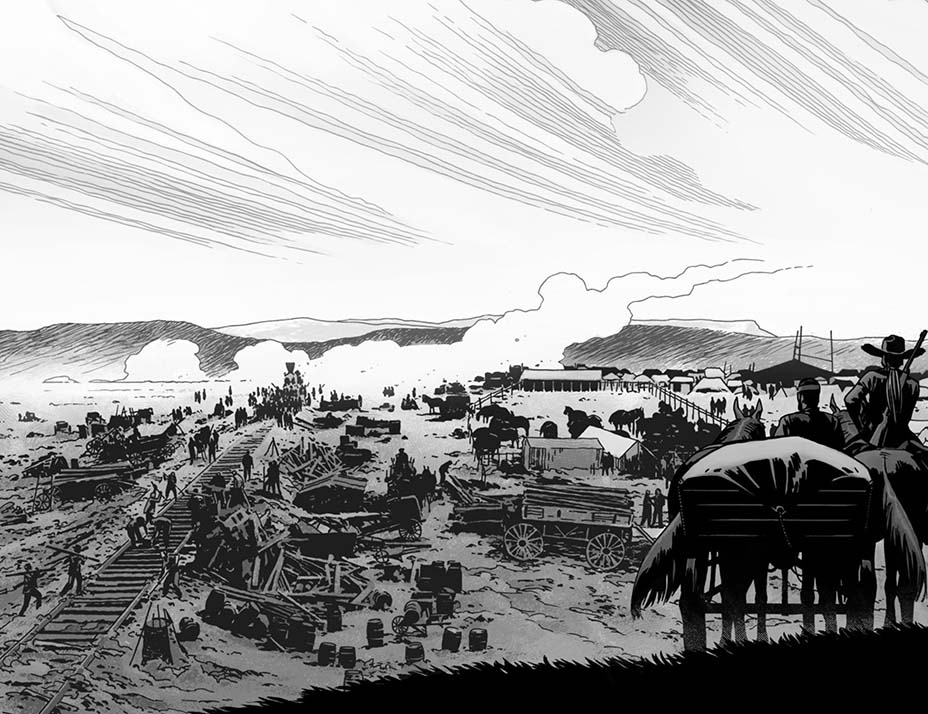 …and who doesn’t want to gaze upon Old Man Eugene himself? 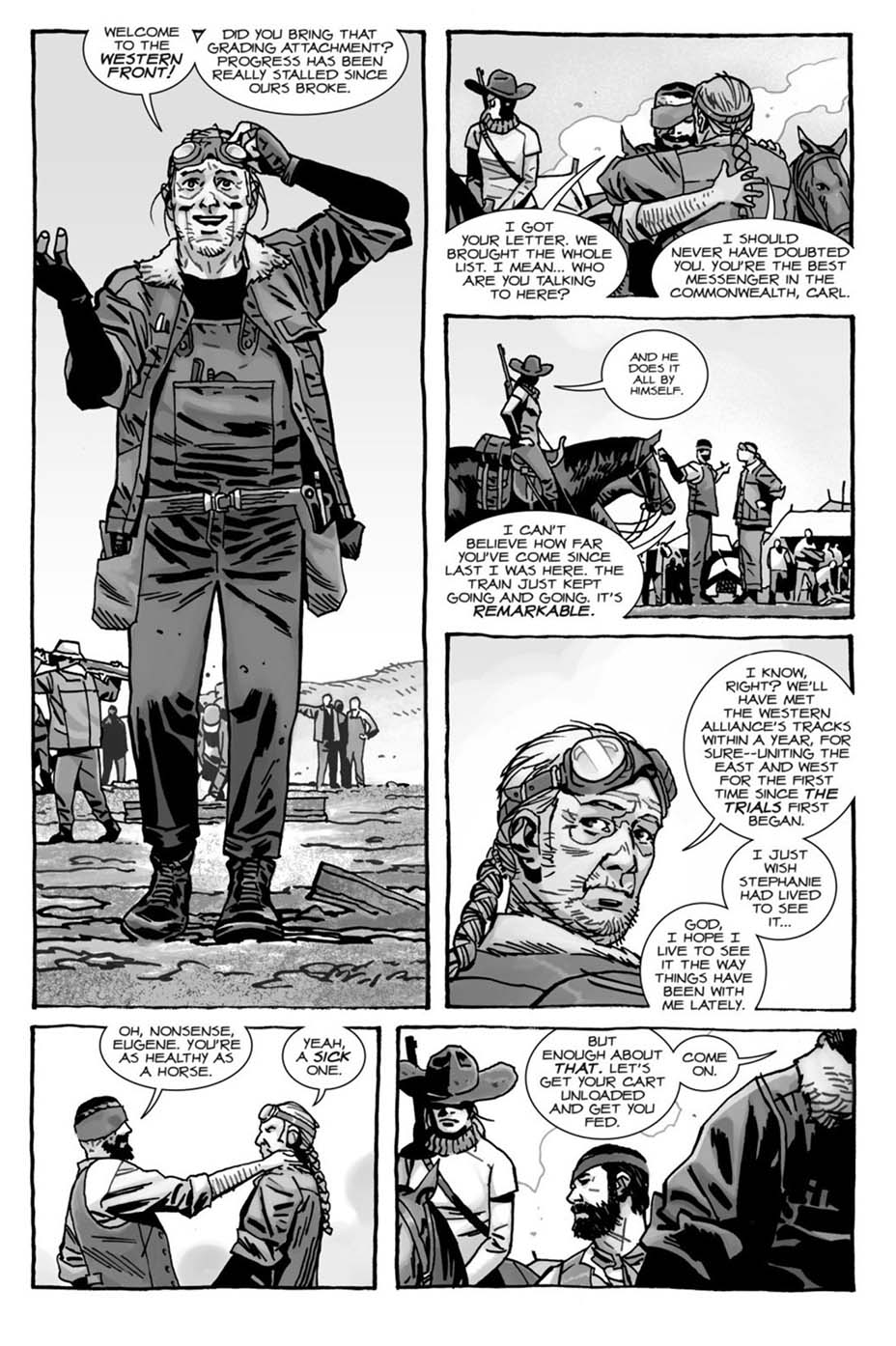 Whenever or if ever The Walking Dead chooses to move closer to the finish line, the Commonwealth story is clearly upon us, indicated not only by Eugene’s in-show contact with Stephanie, but also by casting news from deeper into season ten: Paola Lázaro as Juanita Sanchez, also known as “the Princess of Pittsburgh,” a pivotal character the group meets on the road to the Commonwealth. Princess’ debut is still nowhere in sight, but don’t worry — when it comes, she’ll be impossible to miss.