For a group known as “the Whisperers,” the new Walking Dead villains sure know how to make a loud entrance.

Alpha (Samantha Morton), Beta (Ryan Hurst) and their minions announced themselves with a horrible war cry in the Walking Dead season nine penultimate outing, “The Calm Before,” in which they killed several beloved figures within the Alexandria Safe-Zone and used their severed heads to establish a border wall between the feral and civilized communities. It’s a move straight from the pages of comic book creators Robert Kirkman and Charlie Adlard’s long-running series, which concluded this past summer. It’s also a move that kicks a greater conflict into gear: a full-on Whisperer War. For the sake of the AMC zombie drama, that means Michonne (Danai Gurira), Daryl Dixon (Norman Reedus) and Carol Peletier (Melissa McBride) are about to go to war with an unpredictable enemy, all under the courageous leadership of Angela Kang.

Of course, Kang isn’t literally leading these post-apocalyptic survivors into battle. But she is the one in charge of their stories, having risen through the writers room ranks to succeed Scott M. Gimple as the Walking Dead showrunner in season nine. Kang continues in that capacity in season 10, which bows its first episode October 6, featuring a script from Kang herself and action-packed directing by longtime Walking Dead mainstay Greg Nicotero. (Here’s a minor spoiler for the premiere: make sure to take cover from falling, fiery wreckage.) Kang has been a part of The Walking Dead since its second season, and is the key creative voice responsible for the fresh new direction of The Walking Dead as it shambles forward into a full decade on television — and with one full season already under her belt, the stage is now set for Kang to go all in on the new world order she and her writers have established, thanks to nearly a decade of real time having passed in the actual Walking Dead story over the course of season nine.

In this week’s episode of The Hollywood Reporter‘s Series Regular podcast, Kang goes all in on the creative processes behind season 10’s Whisperer War arc. Ahead, read an excerpt from that interview for more on what’s in store, and listen to the podcast for the full conversation about Michonne, Daryl, Carol and the rest.

Looking ahead at season 10, when did you decide on the story you wanted to tell, and how you wanted to adapt what’s next in the source material from Robert Kirkman and Charlie Adlard?

Knowing this storyline was coming up [from the comics] and knowing I would be running the show during this stretch, there was some very early thought as far back as season eight, when Scott Gimple had said, “Hey, I’m going to transition into this other job and want you to take over the show.” But at that point it was all so theoretical. Until you kind of get in there and know who you’ve cast, and where storylines are going to go, and how they play out, there’s no way to completely plan it out. But there were just certain things that I’d been thinking about, at least in the back of my mind, for a while. When we really got into season nine, that’s when, even as we were working on season nine, there was some sense of some things in season 10 that we knew we want to hit, and here are some things that we want to find twists on.

I would say one example of a story that we really knew that we wanted to tell, was we knew we wanted to tell a big Negan (Jeffrey Dean Morgan) story. And so the way that we structured Negan’s story in season nine had a lot to do with what had come before in season eight, and then kind of our own goals within season nine of showing these different sides of Negan, and being true to the comic and his journey within the prison cell, but also knowing that we wanted to get to certain places with him in season 10. But then once we got into the breaking of the season, which kind of happened in earnest in January, which is usually when our writers room starts, that’s when we started laying all the ideas out, and spit-balling, what are the themes? What’s the feeling and tone of things? How can we kind of get to these moments that we think that we want to get to? Then sometimes discovering that we wanted to go about it a completely different way.

I think one of the things that we kind of thought about early on, and that I’d been thinking about, is that we’ve done a series of wars on the show. We did “All-Out War” with the Saviors, and that was really an all-out war. There were a lot of gun battles back and forth. That was the nature of the conflict with the Saviors, and at that period of time. But because I’d kind of made this decision to jump a lot of time within the show, that changes what the nature of war is going to be in the timeline that we’re in. So we started thinking about that.

I thought a lot about the things that Robert had set up in the comic. One of the things that struck me the most was this idea of “silence the Whisperers,” and the kind of propaganda and paranoia aspects that run through it. Even the idea of a group that called themselves the Whisperers — a whisper, like a whisper campaign you think about in politics … there’s something about it that’s so insidious and sneaky and underhanded that I thought was really interesting, and felt true to who this group was. It’s so brazen that Alpha walked through a festival just wearing a dead woman’s scalp as a wig, and a flowery dress, and then she murdered a bunch of people, kind of in plain sight. There was something about that that felt like she was like a spy, that kind of landed among our people and wreaked havoc. So we really started playing with this idea of things being more like a cold war, because that’s not something that we’ve really done on our show, and we found that there were just some really interesting avenues for us to explore by going down that route that were a little different than we’d played before.

Baked into the Whisperer story is this idea of the border, the spiked border, and just thinking historically about all the kinds of border conflicts that people have gotten into, that we get into right now in our own country. But even in wars, what does it mean to own a piece of territory? In some ways, a border is this completely arbitrary designation that two sides have to agree on or not. And that just led to a lot of ideas about the types of stories we could tell with people who maybe feel like they’re on the wrong side of the conflict, or people who might want to escape from where they’re at, or people who may be trying to spread paranoia and fear. It led us down different paths than we might have in past with stories of battling each other, that we found really fun to play with creatively, and that I hope pay off for the audience when they watch the show. Because it has certainly been really interesting for us to explore [war] in this kind of framework, as opposed to just, what are the coolest battles we can have? 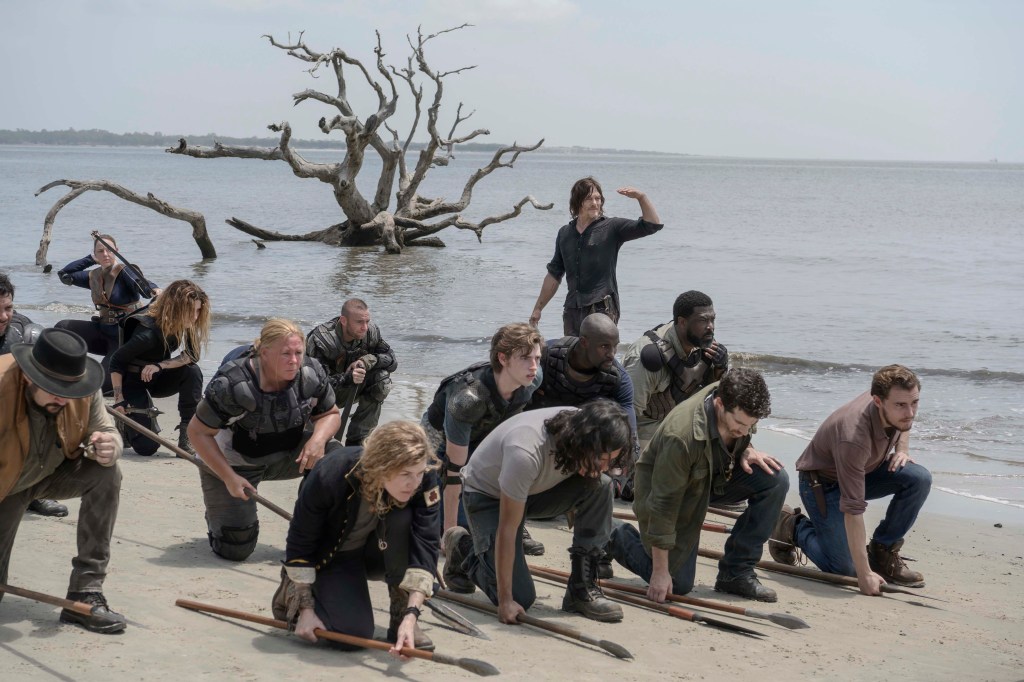 Several months pass between the season nine finale and the season 10 premiere. How have things settled for the Alexandria Safe-Zone since then — and specifically, how does this all sit with Michonne, Daryl and Carol?

After everything happened with the heads at the border and the Whisperers making their threat, we thought it’d be interesting to jump time rather than picking up right on the heels of that. It allows us to show our people trying to move ahead, and it tells us a lot about where their heads are at and what their mindset is. Starting in on the season, we really see they went about things in different ways.

Michonne very much is still this general in a community. Across the first few episodes, you see her grappling with the paranoia that starts to grip everyone. She’s very much thinking in terms of big-picture security ideas. Because the emotional response is like, let’s just go across the border and kill them all. But she’s really thinking about, what does that mean when somebody has tens of thousands of zombies, [especially] when Rick (Andrew Lincoln) basically gave up his life, as far as she knows, on a bridge to to save a hoard like that from running through the communities? They know that zombies are still dangerous, especially when a group can control them.

We got to see Carol having made a completely different choice, which was to run away from it and try to forget it, and try to move on. But it’s really hard to move on from somebody having taken your son’s head off. And so we’ve been really excited about playing kind of a revenge narrative for Carol, because I think a lot of the heart of the series this season lies with Carol. She lost so much and there’s still so much more that they could all lose. We’re playing a lot in her perspective as this grieving mother, who just wants to settle the score between her and Alpha, and the lengths that she’ll go to to do that. Revenge is a dark emotion, and it leads her down some different paths.

Daryl finds himself in an interesting place, and I really love how Norman is playing it. He’s kind of straddling that line between leadership and the stuff that Michonne does, and the stuff that Gabriel (Seth Gilliam) and Aaron (Ross Marquand) and the people on the council are dealing with. He’s also still just being the guy who’s used to being a lone wolf, and having this really emotional tie of friendship and love for Carol, where he feels like he’s watching his friend go down some dark paths. He wants to be there for her, and that kind of takes the story in some really interesting directions, I hope.

I think what we really wanted to show is that for all of the leadership of Alexandria, they’re in different places. And they find themselves wishing that there was peace. But when there’s not peace, there are really different ways to deal with it and to move on — but they’re not always in sync with each other.

This interview has been edited and condensed. Listen to the full conversation in this week’s Series Regular podcast.

Series Regular is part of THR‘s roster of podcasts, including TV’s Top 5, the weekly TV news analysis podcast hosted by West Coast TV editor Lesley Goldberg and chief TV critic Daniel Fienberg; Awards Chatter, Scott Feinberg’s weekly in-depth (and award-winning) interview show focusing on the most interesting talents of the Oscar and Emmy seasons; crafts expert Carolyn Giardina’s weekly series, Behind the Screen, which explores the top artists and technologies creating film and TV magic; and Seth Abramovitch’s monthly series, It Happened in Hollywood, which revisits indelible moments from 90 years of THR‘s entertainment history. Other podcasts are in the works.