[This story contains major spoilers for the season ten premiere of AMC’s The Walking Dead, “Lines We Cross.”]

“Lines We Cross,” written by showrunner Angela Kang and directed by veteran Greg Nicotero, heavily features fire and water over the course of its sprawling runtime, from a beachside battle to a forest firefighting sequence. The cause of said forest fire: a Russian satellite fallen from the sky, like a comet smashing into the earth. Its exact nature remains unknown, though thankfully security specialist Michonne (Danai Gurira) agreed to allow Eugene (Josh McDermitt) a few minutes to salvage the satellite for parts — and based on what Kang revealed during a PaleyFest panel moderated by The Hollywood Reporter‘s Josh Wigler (that’s me!), the answers will have big ramifications for the rest of the season.

“We start in the writers’ room talking about things that happen in the apocalypse,” she said. “How do different things degrade? What have we not shown on the show? Well, when satellites aren’t maintained, they fall out of orbit. We thought that might be something fun to explore at some point. As we talked about the themes of the season, we talked about wanting to go for more of a Cold War type of feel — the idea that the Whisperers are always watching. The satellite felt like an apt metaphor. But of course, it has other implications for the season going forward.”

Those implications notwithstanding, the cold war tensions between the Alexandrians and the Whisperers are already well and truly on display. Season ten kicks off some months after Alpha (Samantha Morton) and her allies kidnapped and killed several members of Alexandria, Hilltop and the Kingdom, using their severed heads as a border wall marker. Much has changed since then: for example, Carol (Melissa McBride) has coped with the death of her son Henry (Matt Lintz) by embarking on the high seas, a storyline that belonged to Michonne in Robert Kirkman and Charlie Adlard’s comic books. In the season premiere, Carol returns to her friends, albeit briefly; she intends to head back out on the ocean on the very next boat, despite the best efforts from best friend Daryl Dixon (Norman Reedus).

By the end of the hour, however, Carol’s priorities have shifted. In order to temper the forest fire, Carol and the others are forced into Whisperer territory — an act of war, in the eyes of Alpha and her people. It’s highly likely Alpha knows about the border-crossing, and even if she doesn’t, she at least knows that Carol is in the area. The premiere ends with the two grieving mothers (as Carol mourns her deceased son, Alpha is likely mourning being estranged from her own child) staring at each other from across a chasm, setting the stage for a bloody feud to play out across season ten.

Speaking with THR during a recent appearance on the Series Regular podcast, Kang previewed the season ahead for Carol, describing her as someone who hit the open seas as a means of moving on from what happened to Henry. With that said, as Kang notes: “It’s really hard to move on from somebody having taken your son’s head off.”

“We’ve been really excited about playing kind of a revenge narrative for Carol, because I think a lot of the heart of the series this season lies with Carol,” she adds. “She lost so much and there’s still so much more that they could all lose. We’re playing a lot in her perspective as this grieving mother, who just wants to settle the score between her and Alpha, and the lengths that she’ll go to to do that. Revenge is a dark emotion, and it leads her down some different paths.” 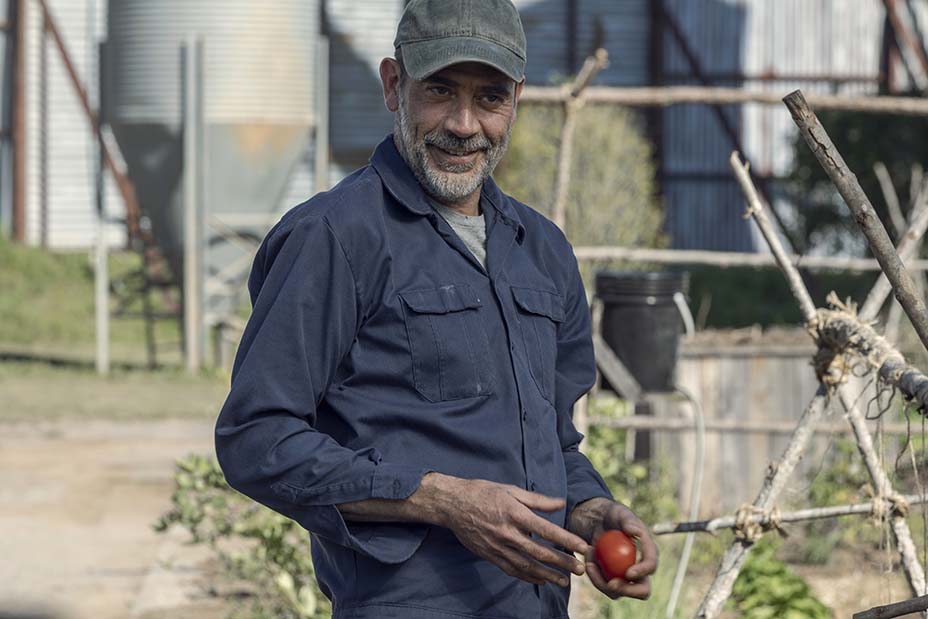 The season ten premiere offered some insight into another Walking Dead fan-favorite who knows a thing or two about dark emotions: Negan, played by Jeffrey Dean Morgan, who has spent nearly a decade behind bars at this point in the story. In the premiere, Negan is seen working garden detail as part of a veritable work release program; the mental picture he paints of “braining someone with a tomato” is a vivid one, to say the least. As the cold war tensions between the Alexandrians and Whisperers takes shape, expect Negan to play a massive role in the conflict — certainly as it pertains to the men and women who were once his enemies, according to Kang.

“It’s safe to say he’s not just in a cage all year,” she says. “If you take away the fact that he bashed the heads in of people that we really loved, if you’re just looking at it from the outside, there’s things where you kind of go, ‘Yeah, his group was attacked by our people in the middle of the night and slaughtered.’ He had his own part of the story, where he was like, ‘Wait a second. I’m the person who’s the aggrieved party,’ whether or not we agree with his tactics in the aftermath. Negan has an edge, but he has aspects that are more relatable and redeemable. I think that the way that he is with Judith (Cailey Fleming), the way that he was with Carl (Chandler Riggs), even though there’s elements of it where you’re like, ‘Oh man, that’s a very Negan way to go about things.’ He was a school teacher before the apocalypse. There’s an element of him that does care about the next generation. So that’s something that we’ll kind of see at play.”

A character who goes unseen in the season ten premiere, but not unmentioned: Maggie Rhee, played by Lauren Cohan. Cohan was last seen in season nine, quietly exiting the series at the same time as Andrew Lincoln’s Rick Grimes. At New York Comic Con, Cohan appeared onstage to announce her return to the series, coming back to the Walking Dead universe as a series regular for season eleven, and appearing even sooner in season ten. In the premiere, it’s mentioned that Maggie hasn’t communicated with Daryl, Michonne or any of the others in quite some time; at PaleyFest, Kang was similarly tight-lipped about the exact circumstances surrounding Cohan’s return, except to say that the story has long been in the works.

“We said — and this wasn’t just a PR lie — when she left partway through the year last year, that we had hoped to tell more stories with Maggie, and it was just a matter of working it out. It’s been a while to figure out what works for her schedule and our production scheduling, but it’s worked out, and we can’t be more thrilled. Maggie is such a compelling character, and Lauren is such a compelling actress. We’ve had a lot of different things percolating, in terms of what she may have been doing out in the world and how that might come back and inform the story going forward. Lauren and I have been talking periodically. She’s been in contact with out cast quite a bit, as well as with Scott Gimple. It’s all taking shape now. I’m glad we were able to put that news out there. We’ve been working on it for a while.”

Perhaps Maggie’s out-in-the-world activities will tie into one of the current biggest lingering mysteries: the strange radio broadcast that closed out season nine. The season ten premiere provided no further clarity on that front, but comic book fans know what it’s signaling: the Commonwealth, a sprawling community that serves as a backdrop for the final arc of Kirkman and Adlard’s comic books. On that front, it was recently announced that Paola Lázaro has joined The Walking Dead as Juanita Sanchez, also known as “Princess,” a major player in the run-up to the Commonwealth arc. Are Maggie and Princess’ fates currently aligned? Will their mutual arrivals signal a shift toward The Walking Dead endgame? If so, the Alexandrians have some more pressing matters to consider: the Whisperers, for one, and a certain major looming departure.

Hear more of Kang’s thoughts on season ten in a special edition of the Series Regular podcast: