[This story contains spoilers for season 10, episode eight of AMC’s The Walking Dead, “The World Before,” as well as the comics from Robert Kirkman and Charlie Adlard on which the show is based.]

For much of season ten, The Walking Dead heroes Daryl Dixon (Norman Reedus) and Carol Peletier (Melissa McBride) spent their time searching for Alpha (Samantha Morton) and her herd of walkers, a group so massive that they are more like an atomic weapon than a gaggle of flesh-hungry monsters. Well, search no more: the bomb has arrived.

In the closing moments of “The World Before,” the season 10A finale, Daryl, Carol and several of their allies find themselves trapped in subterranean surroundings, face to face with the dreaded herd. Exactly how they’re going to escape the dead, and which of these men and women will walk away with their lives intact, remains to be seen, with Walking Dead now on hiatus until 2020.

Another question left up in the air: what’s next for Michonne, played by Danai Gurira, who will leave the AMC zombie series at some point in 2020? The midseason finale saw Michonne meeting a man named Virgil, played by The Leftovers actor Kevin Carroll. (Indeed, between Carroll’s turn on Walking Dead and some action over on HBO’s Watchmen, Sunday marked a big night for the erstwhile Leftovers cast.) Virgil claims he comes from a community with access to weapons that can help in the Whisperer war. Michonne leaves with him to find these weapons, and according to showrunner Angela Kang, she won’t be seen again right away when the season resumes — though it’s not yet clear when exactly she will show up for her final stretch of episodes.

More certain: the fates of two characters. Avi Nash’s Siddiq was murdered in the penultimate episode of the half-season, killed by Dante (Juan Javier Cardenas), a remixed version of a fan-favorite character from Robert Kirkman and Charlie Adlard’s comic book series. In the midseason finale, Father Gabriel (Seth Gilliam) goes ahead and murders Dante, avenging his fallen friend’s death. In the interview ahead, Kang speaks with The Hollywood Reporter about the brutal murders, the calculus behind killing off a series regular in this late stage of The Walking Dead‘s run, what to expect from Michonne moving forward and what to look forward to following the current cliffhanger.

'The Walking Dead': How That Fatal Twist Pays Homage to the Comic Books

The season ends on a cliffhanger: Daryl, Carol and others are face to face with the Whisperers herd. Why was this the right landing point?

Because we’ve been playing this conflict between the Whisperers and our people, and it wasn’t in the exact same way as “All-Out War.” We found out they were spying. We found out that there are these border conflicts. But it felt like by the half-season, we wanted to show that all of the factors are now crashing together. Some of our people have been looking for this herd, which they consider the Whisperers’ nuclear weapon. For Alpha, things are coming to a head on her side, too. What better way than to put our people face to face with the herd in what feels like an impossible situation? That’s when our people have to get clever and figure out what to do next.

Last week’s episode revealed Dante as a secret Whisperer, which felt like a remix of the comics to an extent. What was the thought behind that twist?

It came about in a funny way. We talked about introducing Dante as a character a few times over the years. It never happened. It never felt like the exact right time. Why bring in Dante now? What’s he doing for the story? Then when Lauren was out for a while, it was like, well, we weren’t going to do that version of Dante. He was on the backburner for us for a bit. Then we started working on the story of the conflict of the Whisperers in a way that feels new and refreshing, and plays into a cold war feel that we wanted to experiment with. So how can we tell a story about espionage? Our people are so smart and are so on alert. We got to talking about how people want to inherently trust doctors and people who are educated, even though there are so many sociopaths among high-achieving people. We started from that place, and then we thought people would be ahead of us. It’s a new character, the audience is going to be ahead of us. But what if we bring in Dante here? In the comic, sometimes he’s a charming rogue, or you can see him as an annoying asshole. (Laughs.) I had that reaction to him at various times while reading the comic. So let’s play with what that’s like, to have someone with boundary issues. There’s part of him that’s likable and charming and interesting — and yet, is there something darker underneath, this pushing of people’s buttons, going a little further than they need to in a situation? We felt it was really interesting to work with. It gave us an opportunity to write someone from the comic but still have a new take on it.

'Walking Dead' Season 10: What's Next After That Sudden Departure

Father Gabriel kills Dante, which is a very big deal — both because an important character this season is now dead, but also because it’s Gabriel committing the killing. How did you arrive at this turn?

For Father Gabriel, we were playing with how he’s always had an interesting relationship with Negan. At times, it’s contentious. Then there are times where there’s a mutual fondness between them. We got really interested in an idea of how Father Gabriel’s story in the series was about trying to redeem himself from this inciting incident in the apocalypse, where he left his congregation outside the doors of his church to die. Everything that’s come after has been in reaction to that. He’s tried to be moral, he’s tried to be a good leader, he’s tried to be calm and forgiving and all of these things. In this season we had a moment with Negan where they’re trying to decide what to do about him. Gabriel feels everyone is too amped up and he wants the night to think about the right thing to do, which was very true of his character up to this point. Then, Negan escapes. Who knows what the ramifications of that will be for our people? Obviously, the audience knows more than our characters do at this point. I think Gabriel feels regret, that maybe he didn’t act quickly enough. What happens when somebody is in this position goes, “As a leader, I have failed. This person who is part of my family, one of the fathers of my child, is dead. Did I fail?” As we talked about it, we know that Gabriel has the capability of darkness in him, because of that thing he did at the beginning of the apocalypse and the other things he’s had to do. That capability is in all of us. In that moment, he goes there. We thought it was an interesting way to evolve that character, to see more shades of him coming out, as he’s more and more in the leadership, as he’s realizing who he is as a leader in Alexandria and what he’s willing to do. Seth is an amazing actor. He has some great stuff along these lines coming up this season as the story continues to play out. He’s really interesting when you see that part of Father Gabriel that isn’t a goody two-shoes, but has had to do some dark things to survive. 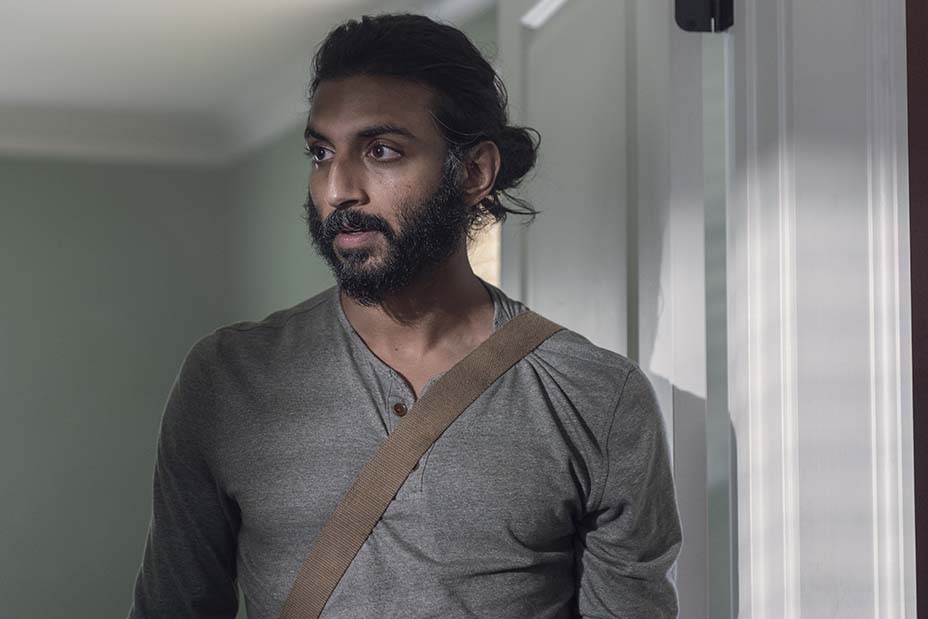 What was the calculus on killing Siddiq last week, especially with Danai almost out of the series, and after revealing Ezekiel (Khary Payton) may be terminally ill?

There are so many factors that go into [a decision like that], and some we don’t like to talk about, but there’s always the story at the heart of it. Avi has done an amazing job for us. We love him. We were writing him out for the story. It helped propel the story forward. There’s a tragedy at the heart of it all. That character is so connected to people — for example, Michonne. The heartbreak about Siddiq is going to play into her story. There are so many factors related to losing Siddiq, where his death has a ripple effect. In addition to telling a story that’s hopefully deep and interesting for what that character was going through — a terrible trauma and PTSD — his reach is so deep with all of these characters. It really humanizes the conflict. They are fighting people wearing the masks of dead people, and there need to be real consequences to them. Our show is very diverse. If you look at our cast of series regulars, the majority of our cast are from historically underrepresented groups. Many of them more than one at the same time. It makes it hard not to kill someone who is from a minority population. For us, we’re just trying to show a world that is populated by a variety of different people, and all of them are important to us. All of these types of decisions are difficult, but there have to be life and death stakes to the show.

That’s the thing! (Laughs.) The “dead” is in the title. Every actor who signs onto the show knows they are probably going to die. It’s just a matter of when and how! Everyone comes in with that knowledge.

Michonne goes off with Virgil on this mission to find weapons against the Whisperers. Is this the last we will see of her for a while, given that Danai is leaving this year, and only signed for a limited amount of episodes?

She goes off with Virgil and there’s a little bit of a trip there, so no, we won’t see her right away when we come back, but I won’t say exactly when she comes back in the back half. But there is more story for her. There’s some meaty content with her that will hopefully be cool for the audience. She’s going to go through some really emotional and complicated decisions. There’s going to be some stuff that will introduce some very interesting intrigue in her story as well. I hope we’ve done right by her. I think she’s just absolutely brilliant. That’s about as much as I can say without giving too much away.

But we’re in the Michonne endgame, right?

How 'The Walking Dead' May Be Closing In On Its Endgame