[This story contains spoilers from “The First Day of the Rest of Your Life,” the season-seven finale of The Walking Dead.]

The Walking Dead showrunner Scott M. Gimple and the show’s latest fatality broke down Sunday’s season-seven finale of the AMC zombie drama during Talking Dead, opening up about the “All-Out War” arc that kicked off what will be the central focus of season eight.

Gimple was joined by Sonequa Martin-Green, whose Sasha opted for suicide rather than be used as a pawn by Negan (Jeffrey Dean Morgan) in the Saviors’ bid to get Rick (Andrew Lincoln) and his group to kneel before them.

'Walking Dead': Who Died in the Season 7 Finale?

“It just felt so right and complete. It was quite poetic when I found out how it was going to happen. It was the perfect culmination of [Sasha’s] life. I felt like all of my roads had led to that moment of getting to that place of complete selflessness. It felt perfect,” Martin-Green said. “It was the first time we had ever rooted for a walker but it was also beautiful because the way I saw it is that warrior spirit lives on. Even in death, I was still going to fight because I had realized my purpose: everything before that had been self-preservation, self-defense mechanisms and basically self-obsession. Over the course of my life as Sasha, it was progressing beyond that to the point where said I now have a greater purpose that’s much bigger than me and that’s for the future and I’m going to do it even in death.”

Sasha’s demise on Walking Dead was largely anticipated, set up by events on the show (which mirrored an arc that happened to a different character in the comics) as well as the fact that Martin-Green nabbed the female lead in CBS All Access’ Star Trek: Discovery. Still, it was a fitting demise for the character who was first introduced during season three as the meek brother to comic book fan favorite Tyreese (Chad Coleman).

“It became clear that I was going to have to [take Eugene’s poison pill] when all other options had been exhausted when Negan said, ‘I am going to use you to hurt more of your people,'” she added of the moment Sasha decided to sacrifice herself for the greater good. “Since I knew so deeply in my heart that my purpose was this service to my family, to the future, that would be completely antithetical to what I felt I was here to do and had grown to do and had become the person that I was to do. When he said, ‘I’m going to use you’ — nope! That’s not going to happen. I’m not going to let that happen. I’m going to live this out, even if I have to live this out in death. I knew he’d be the one to open the casket and I thought I was going to get him!” 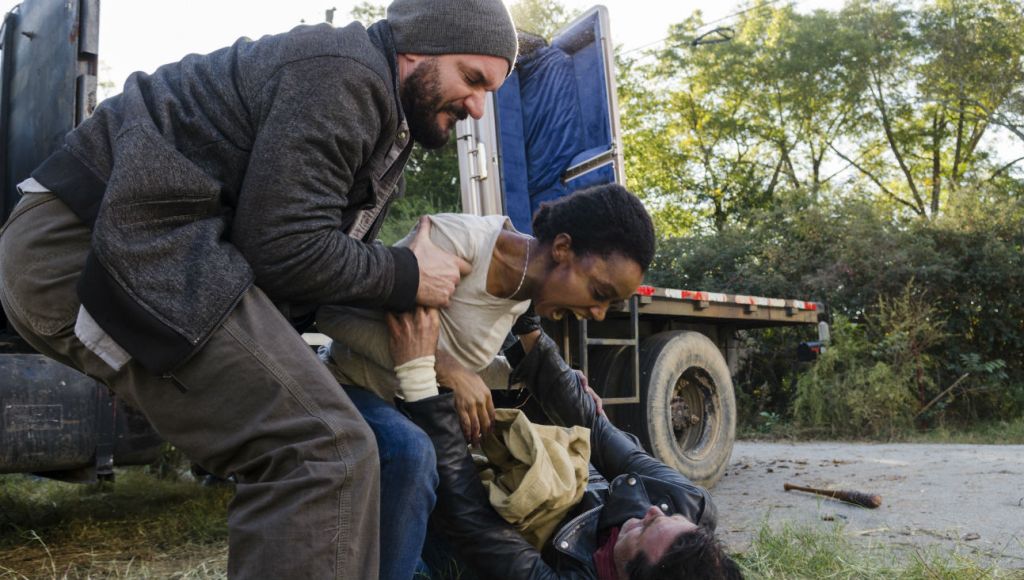 Martin-Green was joined by Morgan as well as Norman Reedus (Daryl) as the trio and Gimple offered the first insight into season seven as a whole.

“It was always about Sasha not being a victim. She wanted a weapon from Eugene — a knife — and didn’t get one so she became the knife,” Gimple said of the decision to kill Sasha.

Cudlitz, who reprised his role as Abraham in the season-seven finale, surprised Martin-Green with flowers during Talking Dead, bringing the actress to tears. The episode was only the second since season two to feature only one walker — Sasha. The last? When Dale (Jeff DeMunn), the show’s original moral compass, turned in season two.

“It’s a question of the continuum of these characters.… They’ve all affected one another. If Glenn had not saved Rick, this community would not have existed. They all remain a part of them. Abraham remains a huge part of Sasha, Sasha remains a part of them all,” Gimple said. Glenn talked a lot about this subject to Enid…and he tells her that people aren’t gone, they live within you if you continue to honor them and follow-up on their work and what they believed in. This just seemed a way that came to life.”

As for coming back, Cudlitz said it felt like rejoining a group of family as the cast remains close despite those who may have been killed off. “It was like coming home. And it made it possible for us to connect. That was one of my favorite scenes,” he said of his peaceful scene with Sasha. Add Martin-Green: “If there was ever a question of why these two were drawn together, now you see. The title of their relationship could be We Put Our Heads on the Chopping Block — Always for Someone Else.”

For his part, Morgan said Negan always wants the strong-willed soldiers on his side and grouped Sasha in with Daryl in that capacity. “When he says to her, we can run this together, he’s being absolutely genuine,” he said. “He sees something in her that he respects a lot. … He was surprised as anyone else that she came out [as a walker] like that.”

Morgan also playfully declined to apologize to Cudlitz for having to kill off Abraham and instead joked about taking over the actor’s trailer on the show’s Atlanta set.

As for what to expect when season eight returns in October, the finale set up the big “All-Out War” arc from Robert Kirkman’s comic book series that serve as source material for the AMC drama. Gimple offered a cryptic preview.