[This story contains spoilers through season seven, episode 15 of AMC’s The Walking Dead, as well as the comics on which the show is based.]

At multiple steps along the way, AMC’s The Walking Dead has gone out of its way to show just how far away it can stray from Robert Kirkman and Charlie Adlard’s comic book source material. Look no further than the various deaths in the series, and how they often play out at least slightly left of center from their comic book counterparts, if not in entirely different fashion altogether.

But the latest episode of the series, “Something They Need,” bucked against that trend, at least for the most part. The hour, the 98th installment of The Walking Dead and penultimate episode of season seven, featured several scenes and storylines ripped straight from the pages of the comics, providing the groundwork for some pivotal moments to come.

Take the first scene with Sasha (Sonequa Martin-Green), for instance. Imprisoned after shooting her way through the Sanctuary, Sasha comes face-to-face with a low-level Savior who threatens to rape her. In walks Negan (Jeffrey Dean Morgan), who makes his position on the matter quite clear, shoving a knife through the would-be rapist’s neck. It’s a close mirror of a similar scene from the comics, in which the late Abraham Ford’s (Michael Cudlitz) surviving girlfriend Holly suffers a similar trauma.

It looks like Sasha’s story will continue to head down Holly’s path, too. While the exact circumstances are never shown on the page, Holly dies during her captivity with the Saviors. Likewise, Sasha seems poised to meet her maker, what with the poison pill she now has in her possession thanks to Eugene (Josh McDermitt).

Did 'The Walking Dead' Just Pave the Way for Season 7's Big Death?

Speaking of Eugene, here’s a good example of where the Walking Dead show and comic part ways. In the comics, Eugene responds to Abraham’s death by becoming an absolutely essential member of Rick’s group. But on the show, based on in his interactions with Sasha, it’s clear that Eugene is truly turning his back on Alexandria in favor of Negan. This is a pretty big departure, and it’s going to be fascinating to see how Eugene’s story gets back on track, considering his pivotal role in the impending All-Out War arc from the comics.

Turning back to the similarities between the show and the comic, we don’t need to look much further than one of the other Saviors for a glimpse into the future: Dwight (Austin Amelio), one of Negan’s top lieutenants who has seemingly defected in order to join the Alexandrian cause. Rick (Andrew Lincoln) and the others might not buy what Dwight’s selling, based on the gun they point in his face at the end of the episode. But the comics tell us otherwise: Dwight plays both sides throughout the war, but at the end of the day, he’s loyal to Rick, becoming one of his closest allies in the subsequent years. 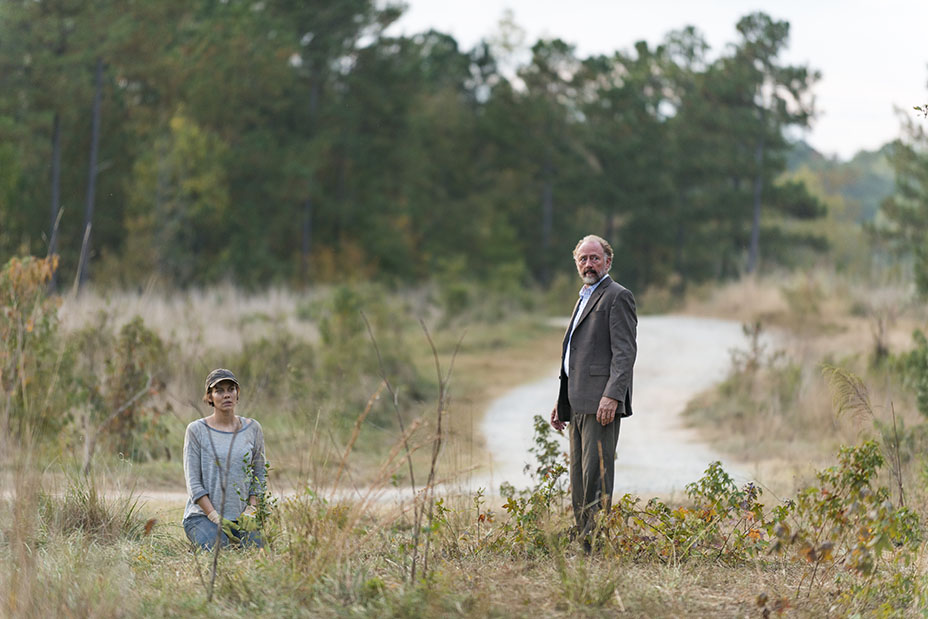 Which leaves us with two current allies, though their partnership is tenuous at best, destined to become bitter rivals: Gregory (Xander Berkeley) and Maggie (Lauren Cohan), the official and unofficial leaders of the Hilltop, respectively. In the episode, Gregory nearly killed Maggie, before that fearsome walker came along. It’s a moment that foreshadows a story from the comics, in which Gregory conspires to assassinate Maggie and reclaim his control over the Hilltop.

No spoilers on how that plot works out, except to say it’s not even Gregory’s first time turning his back on his people: he eventually travels to the Sanctuary and takes Negan’s side in the war, creating a significant setback for Rick and the others. Based on where Gregory ends this week’s episode, with an eye on a road trip to visit his buddy Simon (Steven Ogg), it’s a smart bet that the show is following Gregory’s comic book arc more closely than some might have anticipated.

What other comic book parallels did you catch in this week’s Walking Dead episode? Let us know in the comments, and follow THR.com/WalkingDead all season long for news, interviews and more leading into next week’s season finale.

Did 'The Walking Dead' Just Pave the Way for Season 7's Big Death?

'Fear the Walking Dead' Showrunner to Exit After Season 3