During the course of “All-Out War,” the explosive arc that dominated season eight of The Walking Dead, viewers became used to a recurring sign in the sky: a helicopter, improbably cutting through the air, with no accompanying explanation. Now, thanks to the latest episode of AMC series, an explanation is very much on its way.

In “Warning Signs,” the third episode of the show’s creatively retooled ninth season, Anne (Pollyanna McIntosh), the artist formerly known as Jadis, attempts radio contact with an unknown party, having seen the familiar helicopter roaring overhead just one episode earlier. It leads to a confrontation between Anne and Father Gabriel (Seth Gilliam), with whom she’s recently embarked on a romantic relationship, or at least a physical one. Anne tries to convince Gabriel to run away with her, as she no longer feels safe as tensions are rising between the Alexandrians, Saviors and everyone in between. When Gabriel stands strong and demands she report her secret alliance with the Helicopter People (for lack of a better current term), Anne smiles, knocks out Gabriel and declares that he’s not a “B.”

For anyone scratching their heads over Anne’s revelation and the seemingly binary code about “A’s and B’s,” fret not: you’re far from the only person completely confused by the latest Walking Dead turn of events. Indeed, even the writers involved with the series were in the dark about the helicopter and its implications for longer than outsiders may initially realize. Speaking with The Hollywood Reporter, showrunner Angela Kang says she only received the answer to the helicopter mystery from Scott M. Gimple, her showrunning predecessor and current chief content officer of the Walking Dead franchise, shortly before she assumed his old post.

“Scott Gimple knew what the helicopter was for a long time,” says Kang. “He was a little secretive, even with [the writers’ room], about what it was. He did let me in on some of it at some point last year. We went into this season with a pretty good knowledge about the intention behind the helicopter and where it would lead.” 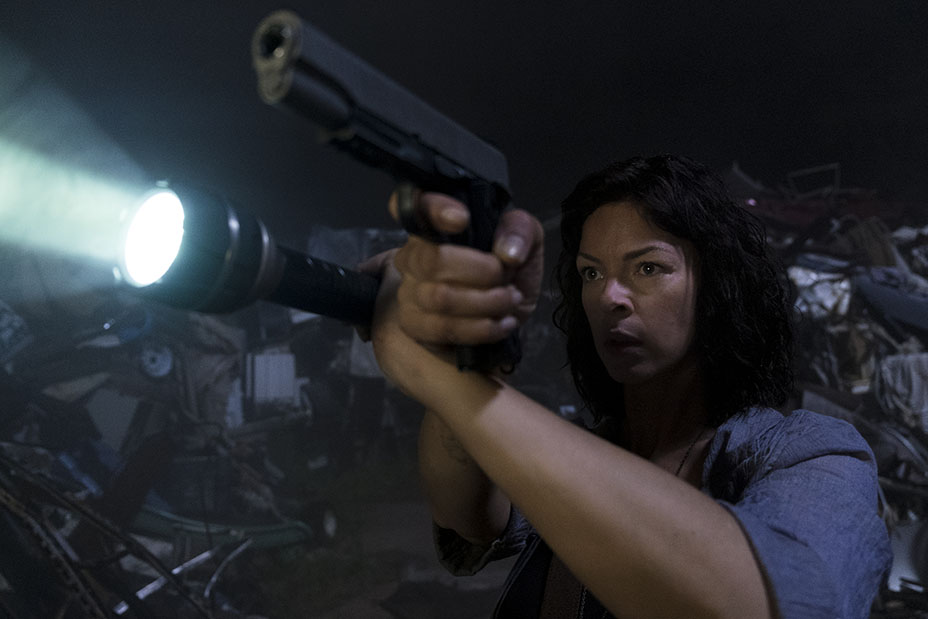 So, where will it lead? Naturally, Kang remains coy on what exactly the future holds for the helicopter arc, except for this clue: “Without giving away what it is, we know Rick (Andrew Lincoln) was an ‘A,’ and Negan (Jeffrey Dean Morgan) was an ‘A.’ She thought Gabriel was a ‘B,’ and she’s since changed her mind. Take that and extrapolate from there.”

As advised, here’s some potential extrapolation, and a healthy amount of conjecture: the helicopter could connect to a community from the comic books known as the Commonwealth. The current run of comics from Robert Kirkman and Charlie Adlard sees Rick and his people colliding with a new group of survivors in the Commonwealth, an even more advanced society than Alexandria, complete with functional law firms, vacation spots and more. Some fans believe Georgie (Jayne Atkinson) may be connected to the Commonwealth. The recent focus on “A and B” types feels familiar to how things work in the Commonwealth, too, as the community is built on a class system.

The Commonwealth may or may not be the answer to the present helicopter mystery; in any event, it’s likely to pop up on AMC’s version of The Walking Dead at some point down the line. Whatever the answer to the helicopter, it’s one that’s drawing on the show’s own mythology. Kang points to the various sightings of the letter “A” throughout the seasons, including the “A” train featured during the Terminus arc in seasons four and five.

“It was something we built as part of their system,” she says about how “A” first emerged in Terminus, “but over time, it became something we thought was interesting to explore [on the show]: how do people label things? ‘A’ at the beginning of the alphabet is something that can easily be part of a labeling system. It’s cropped up at various points throughout the series. You even see how they’re building their own road signs in episode one of this year: ‘Route A.’ You’ll see different signs spray-painted: ‘Route A,’ ‘Route B.’ In a world that has devolved into decay and zombies, it’s their way of making sense of things again. There’s some fate and synchronicity for our characters that they keep running into things like that.”

The answer to the helicopter mystery resides somewhere in the episodes ahead. But before closing out, one last curious takeaway on what its return means for the future of the series, according to Kang: “We’re learning once again that the world is wider than our people think. There are more people out there that may have hostile intentions, or at least a different philosophy about how to survive.”

Those hostile intentions and different philosophies on how to survive will take on new meaning when two characters with “A and B” labeling arrive later this season: Alpha and Beta, the leader and top lieutenant of the Whisperers, respectively. More on them still to come.