What the Walking Dead season nine finale lacked in soap, it more than compensated with a season-ending radio blast. The closing moments of Angela Kang’s first year as Walking Dead showrunner brought a brand-new mystery to the forefront — namely, someone out in the world is trying to get in touch with the Alexandria Safe-Zone survivors.

In “The Storm,” King Ezekiel (Khary Payton) bookends the hour with a series of radio transmissions, first explaining the existential crisis at the Kingdom before ultimately finding new resolve in his place at the Hilltop. During the final call, Ezekiel speaks with Judith Grimes (Cailey Fleming), who is calling in to him from Alexandria. When the two stop communicating, the camera closes in on Ezekiel’s side of the transmission at the Hilltop. Once he leaves, a mysterious voice comes in over the radio, offering up muddled words akin to a post-apocalyptic Adele song: “Hello, can you hear me? Is anybody out there?”

“We always like to have a little bit of mystery for the audience,” Kang tells The Hollywood Reporter about the finale’s final moment. “The radio voice falls in that mold. Any time we have a mysterious moment like this, whenever we have different entities and people come into our characters’ world, it’s something that’s going to turn the story in a new direction. Hopefully it’s all something you’ll enjoy seeing in the next season.”

The radio call calls to mind a similar moment from Robert Kirkman and Charlie Adlard’s Walking Dead comic book series, one that utterly transformed the landscape of the zombie apocalypse — and indeed, is still transforming the comic book storyline. (Spoilers from the comics are ahead.) 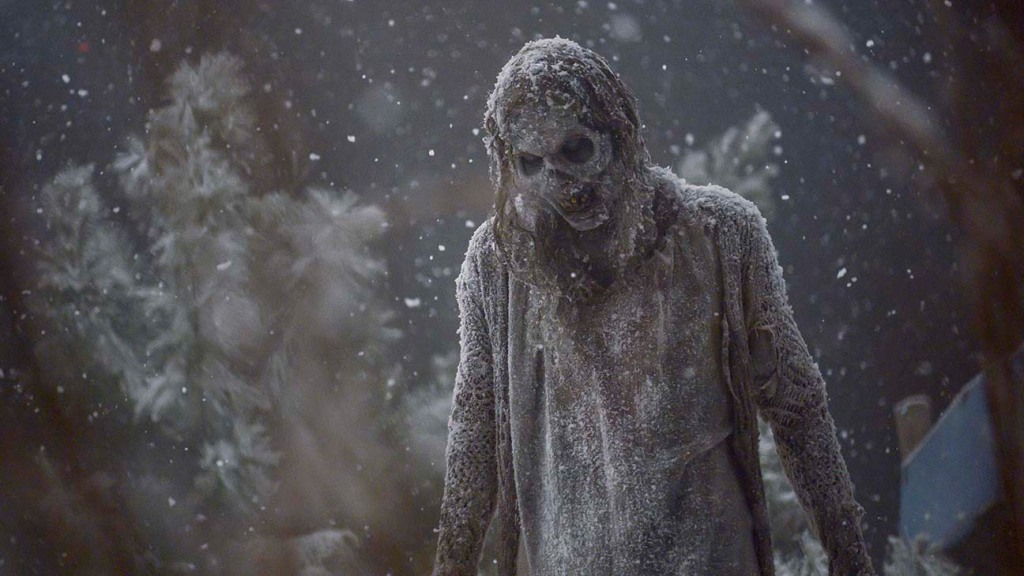 If Kang’s plans for season 10 mimic the storyline from the comics, then she and her team of writers have just introduced a new community, known as the Commonwealth. In the comics, before the Whisperer War fully boils over, Eugene (Josh McDermitt) finds himself grieving the loss of a loved one killed during the mass beheadings: Rosita (Christian Serratos), who was spared in the TV version of events. As he’s mourning Rosita’s death, Eugene hears a voice over a radio, prompting him to embark on an unlikely friendship with the cautious stranger.

The person is eventually revealed as Stephanie, a woman who lives in a sprawling Ohio community called the Commonwealth. It’s by far the most expansive and elaborate community in the world of the dead, at least as far as our heroes have encountered through nearly 200 issues of the comic book series. The Commonwealth is so vast that it includes law firms, bakeries and vacation spots — making the Alexandria Safe-Zone look positively medieval in comparison.

The Commonwealth serves as the next major story point in the Walking Dead comics, once the threat of the Whisperers is well and truly resolved. What’s more, it’s still at the heart of the ongoing comic book storyline. In other words, if the AMC drama is about to dive headfirst into the Commonwealth, it’s getting dangerously close to catching up with the pace of Kirkman’s original version of events. Looks like winter isn’t the only thing Walking Dead and Game of Thrones have in common.

Of course, there’s a key difference between the AMC and HBO epics: unlike Game of Thrones, The Walking Dead has never tried to mirror its source material. It proudly remixes iconic material from the comics, rarely following the exact path set out by Kirkman and Adlard. Look no further than the losses of Rick (Andrew Lincoln) and Carl (Chandler Riggs), both of whom are alive and well in the comics, or Carol (Melissa McBride), long since dead in the source material. Even if Walking Dead catches up with Kirkman in season 10, the show’s approach to the story is already so different that it shouldn’t matter all that much.

That said, there are tons of reasons to get excited about the Commonwealth tease, even if its full arrival isn’t exactly imminent. (It likely won’t come into full focus until the middle of season 10 at the earliest.) Top of the list: Princess, one of the most recently introduced main characters in the comics. She’s an eccentric survivor who lives in isolation, a character who will provide AMC with a big casting opportunity, to put it lightly. Other characters to keep an eye on: the aforementioned Stephanie, who winds up in a relationship with Eugene in the comics; Pamela Milton, the Governor of the Commonwealth (and a very different Governor from the one Walking Dead fans already know, even if she’s sinister in her own right); and Mercer, the Commonwealth’s foremost security expert.

All exciting prospects to consider, to be sure — but all of them are bound to take a backseat until Alpha (Samantha Morton) and her Whisperer army are dealt with for good.