[This story contains spoilers for the season nine premiere of AMC’s The Walking Dead, “A New Beginning.”]

For the franchise, the ninth season premiere of AMC’s The Walking Dead very much lives up to its title: “A New Beginning.” For leading man Andrew Lincoln, however, it marks the beginning of the end.

After more than 100 episodes inhabiting the iconic role of post-apocalyptic cowboy Rick Grimes, Lincoln is about to say farewell to The Walking Dead, at some undisclosed point in the season ahead. The groundwork for his exit is now clear and present thanks to the events of Sunday’s premiere, which casts Rick as a wide-eyed and optimistic leader of the Alexandria Safe-Zone, even if he’s not exactly comfortable with his newfound celebrity status.

Across the communities, including the Sanctuary, Rick is highly regarded as the man who ended the war with Negan (Jeffrey Dean Morgan) and forged a lasting peace between all of these warring factions. The truce appears shaky, however, what with Daryl (Norman Reedus) rejecting his own role at the head of the Saviors, preferring to keep a tighter circle — not to mention Maggie (Lauren Cohan) executing Gregory (Xander Berkeley), solidifying her status as a leader willing to dole out deadly consequences.

“For this first episode, we’re trying to be true to the feel of the comics, while also paying homage to some of the stories we started setting up at the end of the previous season,” new showrunner Angela Kang tells The Hollywood Reporter about how the season premiere sets the stage for Lincoln’s eventual exit. “We left Maggie and Rick somewhat at odds — quite a bit at odds, actually — over the decision to keep Negan alive. That’s one of the things that underlies the episode. We made the choice to not make it something they verbally argue about too much. It comes out in a different form. It’s almost as if Negan is a ghost over the proceedings for Rick.”

There’s another ghost haunting Rick’s decisions both in the premiere and in the episodes ahead: Carl (Chandler Riggs), killed during the events of “All-Out War,” a massive departure from the source material written by Robert Kirkman and illustrated by Charlie Adlard. “In the show’s story, which is different from the comics’ story, Carl is gone,” says Kang. “That’s a major part of what’s keeping Rick going now.” 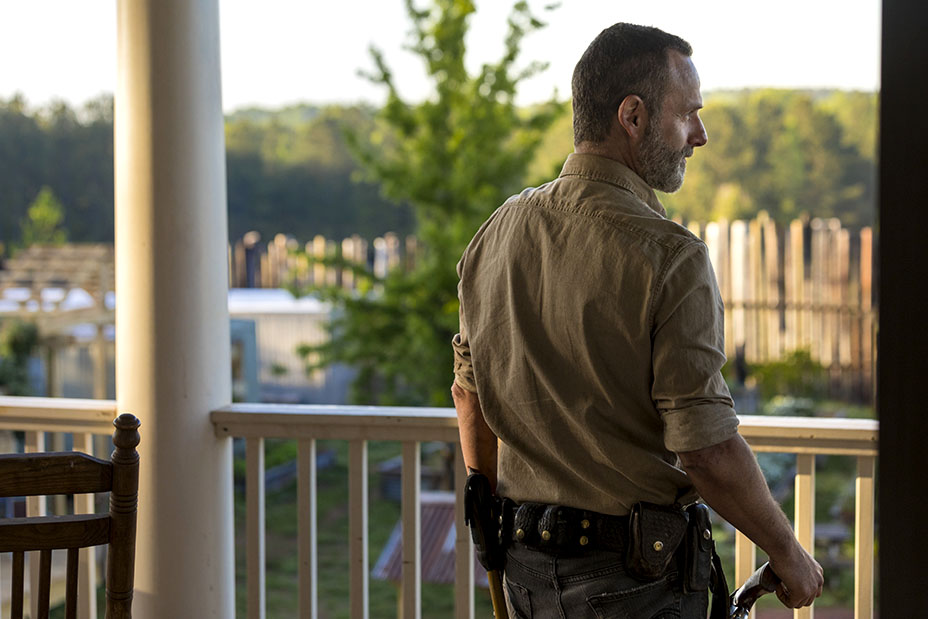 From Kang’s perspective, the Rick Grimes season nine storyline embodies one of the unsung qualities about the Walking Dead hero: “The thing that’s really interesting to write with Rick is he’s a man who really thrives with a mission. When he doesn’t have a mission, he’s at odds. Sometimes, the deaths of characters really knock him off course. It’s only when he finds that next project to work on that he’s animated. We wanted to stay true to that aspect of Rick.”

Enter: the literal bridge Rick wishes to build to facilitate travel, contact and conversation between the various communities — communities that don’t always see eye to eye, as evidenced by the season premiere. Kang promises the broken bridge will be “a big part of the story moving forward,” as Rick throws himself into the construction of a huge, heaping metaphor. Indeed, if we’re taking a moment to speculate here, one can easily see how the bridge may inform Rick’s eventual exit from the series. Rick somehow losing his life to protect the bridge, inspiring the broken relationships to heal and strengthen in his honor, really writes itself.

As far as his role as the leader, however, it’s not one Rick wears easily. As Kang describes the man: “In some ways, he feels like a dinosaur after the war. He’s weirded out that he’s ‘the famous Rick Grimes.’ He doesn’t like that. It’s not comfortable for him. He’s taken a little bit of a step back from being the sole leader of Alexandria. Michonne is taking more and more of a role. We wanted to hit at that here, and we’ll see more as the season unfolds.”

“We’re trying to set up where the different characters are at in relation to Rick,” she continues. “In a lot of ways, Rick has shepherded this more positive and collaborative world by saving Negan. It’s almost as if he’s willed it into existence. But there are still cracks. It came with a cost. It came at the cost of some people. Maggie’s heart is pained. We’re starting to see cracks in the relationship with Daryl. Even though these are people who love each other, they’re drifting from each other a little bit. Rick feels that. It’s painful to him. He’s a man who was in search of his family, and here’s the family he has now. It’s a big part of the story of the season.”

'The Walking Dead': 9 Predictions For Season 9