[This story contains spoilers from the season nine premiere of AMC’s The Walking Dead, “A New Beginning.”]

Both The Walking Dead and the humans at the heart of the AMC series stand at the edge of civilization, with hope in their hearts for the first time in years. Unfortunately, not every human will last long enough in the current season to enjoy the fruits of those hopes.

There’s Rick Grimes (Andrew Lincoln), of course, whose time in the world of The Walking Dead is about to draw to an end. Same with Lauren Cohan as Maggie Rhee, though most signs point to her exit allowing more flexibility for a comeback. More urgently, and decisively permanently, is the matter of the series regular whose character finally lost his life in the season nine premiere. Gregory, played by Xander Berkeley, the Hilltop higher-up, lost his life in Sunday’s season nine premiere after tempting fate against Maggie one last time.

In the final act of the premiere, “A New Beginning,” Gregory attempted to stage a coup against Maggie, with self-destructive results. The plan involved fueling local blacksmith and recovering alcoholic Earl (John Finn) with booze, then convincing him to assassinate Maggie, now the decisive leader of the Hilltop more than a year after the events of season eight. The coup failed, Maggie recognized Gregory’s fingerprints were all over the plot and opted to publicly execute her longtime political rival for all of the Hilltoppers to see.

For fans of the Walking Dead comic books from Robert Kirkman and Charlie Adlard, Gregory’s death is hardly a surprise. In the comics, he’s hanged under similar circumstances. For his part, Berkeley was well aware of Gregory’s fate from the comics, too. In fact, it was a big part of why he initially signed on for the role.

“It was in the comic book, so people would say to me, ‘Do you know about that? Have you seen the comic book?’ And I would say, ‘Yeah, that’s why I took this job,'” Berkeley laughs, speaking with The Hollywood Reporter. “I was always looking forward to the hanging, because it was death that I had yet to experience, and I’ve made my living dying.”

Indeed, Berkeley has lived and died many times onscreen. During the course of his conversation with THR, the actor looks back fondly on his various on-screen deaths, including playing an ill-fated traitorous secret service agent in Air Force One. “In a way, the cheering for the demise or the volume of the boos is an indication of your having made an impact on an audience,” he says. “You don’t always have to make an impact through warming the heart.”

With that said, by his own admission, Berkeley had hoped to work his way into viewers’ hearts during the course of his time on The Walking Dead. He admits to a certain level of yearning for redemption on Gregory’s part, a hope that went largely unfulfilled.

“It’s hard,” he says, “with a show like this that’s so emotionally affecting over the years … the characters work their way into your hearts and you do feel empathy for so many of them and the situations they find themselves in, that in a way, I think the concern at one time or another might have been that you would come off as a one-dimensional actor if your character wasn’t allowed to show the dimension of humanity that we associate with becoming empathic and somehow compassionate, or someone capable of redemption at some point.” 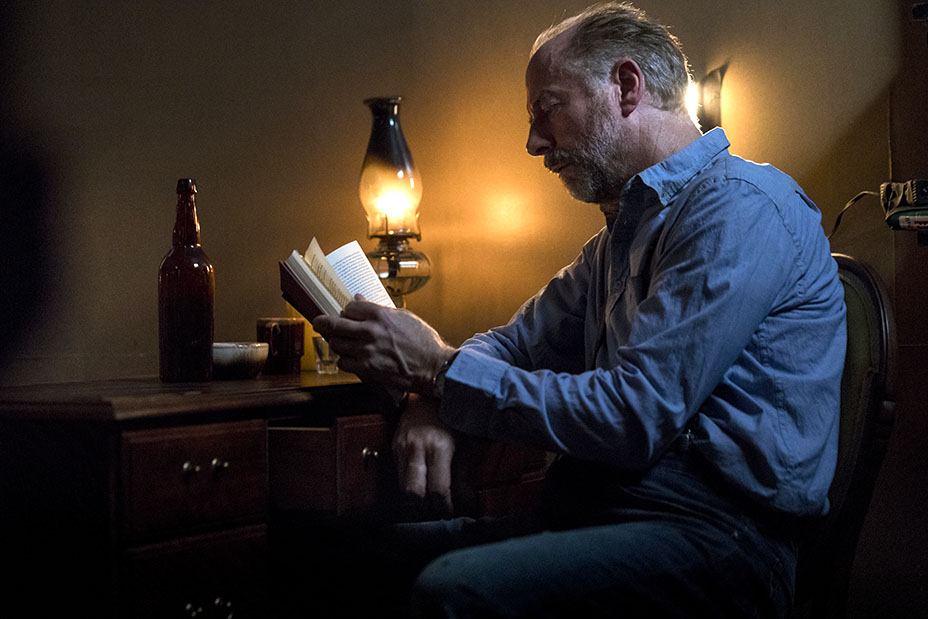 Perhaps the bigger surprise than a lack of redemption for Gregory, according to Berkeley, was the timing of his character’s death. He says he was surprised and admittedly disappointed when he learned he would only appear in the first episode of season nine.

“They had given me such amped up, fun stuff to play earlier on,” he says, “and I’m definitely accustomed to being an ensemble player, but I’m used to being a dynamic player in an ensemble, and that was such a passive role to play for so many episodes [in season eight] that I had questioned the authorities on just how long I was going to have to sustain that state. I was given the sense that it was part of an arc, and that all arcs are made to create a circle, and that the full circle would be that he would be brought back up to a place of power before the inevitable conclusion of the horrific demise that we knew [from the comics].”

Instead of a multi-episode arc, Berkeley was left with only the season premiere to play out a shortened version of the Gregory downfall.

“I think my experience was characteristic of the show,” he says of how he found out about Gregory’s death in the premiere. “Sometimes it’s a last-minute revelation, because of the nature of the discovery of where the storyline is going at any given moment as they’re coming up with this stuff of the top of their head. There’s so many moving parts and pieces and the way in which it all fits together, and there’s all these truly beloved characters that they knew maybe they had a short amount of time left with, and that they needed to maximize the real estate on their characters and that meant bringing other things around to a conclusion. I can’t even begin to imagine what that mental dance is. But I’m always a little in awe and impressed by it.”

'The Walking Dead': 9 Predictions For Season 9

Despite his initial disappointment over the truncated version of Gregory’s exit story, Berkeley says he was ultimately quite satisfied with how it played out. In fact, he points to one of his other most famous TV deaths as an example of his philosophy toward the fast-paced fluidity of the medium: George Mason, the cranky counter-terrorism boss in the first two seasons of Fox’s 24.

Heading into season two of 24 as a series regular, Berkeley only signed on under the circumstances that his run would be a limited one. “They knew that the way to get me to become a series regular in season two was to make it a limited commitment,” the actor remembers. The stipulation led to one of the most memorable story arcs of the entire 24 franchise, let alone that season: Mason contracting radiation poisoning, left with only 24 hours to live.

About halfway through the season, Berkeley asked his 24 bosses if they knew yet when George Mason would succumb to his illness. At that point, Berkeley, who describes himself as a “freak for the makeup thing,” was already hard at work researching “how radiation poisoning would look, and how we would map it out over the course of the season.” In those conversations, Berkeley learned that he wouldn’t actually get to fulfill the arc as originally envisioned. Instead, they offered up the arc as it aired: George would sacrifice himself by detonating a nuclear bomb in the middle of the desert, not only sparing Jack Bauer (Kiefer Sutherland) from having to make the sacrifice himself, but saving countless other lives in the process.

“From that point forth,” says Berkeley, “I experienced in shorthand just how much you may sacrifice any number of episodes to have a distilled impact.”

In that regard, Berkeley is satisfied with the heightened way in which Gregory’s death plays out: “I haven’t seen it yet, but by God almighty, I gave it everything I had. I wrung myself out to a pulp that night.”

Besides, as a laughing Berkeley explains, there’s a silver lining to leaving Gregory behind sooner than expected: “There’s only so long you can play a douche bag like that.”