At first glance, it’s just another patch of grass and mud in the middle of a heavily forested slice of Georgia. But for the people who make The Walking Dead, it’s holy ground in more ways than one.

During an early May visit to the AMC zombie drama’s set in the expansive Raleigh Studios, located just outside of Atlanta, The Hollywood Reporter learned firsthand just how closely knit the world of the apocalypse truly is. Inhabiting 120 acres of land, the sprawling space plays host to most (but not all) of the iconic locations seen throughout AMC’s The Walking Dead, including the aforementioned woodland clearing — a roadside stop within the production space, and one that played host to one of the most harrowing, controversial and ultimately unforgettable scenes in the show’s history.

It’s the site where Glenn Rhee (Steven Yeun) and Abraham Ford (Michael Cudlitz) lost their heads and their lives during shooting of the season seven premiere, a double homicide that came after a monthslong cliffhanger about which member of Rick Grimes’ (Andrew Lincoln) group would end up on the receiving end of Lucille, the wicked Negan’s (Jeffrey Dean Morgan) barbed-wired baseball bat. Reports of that fateful evening are plentiful enough as it stands, with multiple versions of the brutal murder filmed in order to throw off spoilers. Ultimately, the cast and crew all knew the score: Yeun and Cudlitz had reached their last day on earth, at least as far as The Walking Dead was concerned, and it proved to be an incredibly emotional event for the individuals who are physically involved in the creation of the series.

“This is hallowed ground,” executive producer Tom Luse tells a group of gathered reporters, THR included, speaking at the sacred site where Glenn and Abraham were killed. “I don’t know how much we’ll shoot here again. We might not. It’s one of the most difficult things we have ever been through.” 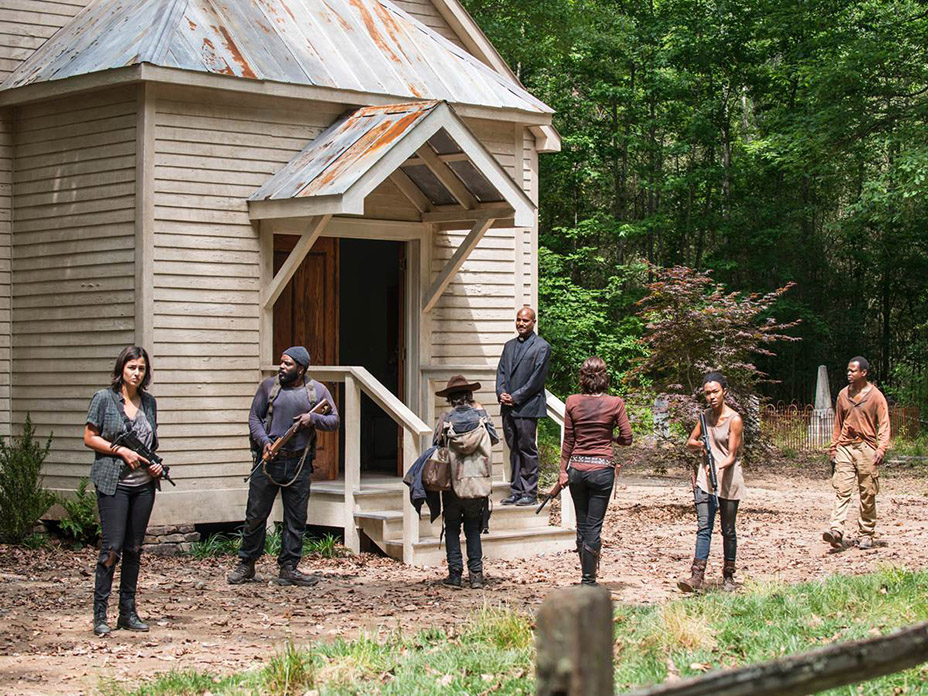 As the primary boots-on-the-ground producer for Walking Dead, Luse knows a thing or two about difficult shoots, as well as the importance of making the most out of a given space, even one as sacred as the place where two of the show’s most beloved figures went down swinging. It’s not the first time this location has been used, for one thing. The site where Abraham and Glenn died was also once a holy place by design, where Father Gabriel’s (Seth Gilliam) church once stood. The bones of that church, featured in only a handful of season five episodes, have since been repurposed to serve as the foundation for the church of Alexandria, which is primarily filmed in a beautiful neighborhood block less than 10 minutes away from Raleigh Studios by vehicle.

Indeed, there’s a sense of closeness and circular history to the physical world in which The Walking Dead exists. One can walk from Rick’s house in Alexandria to the main street of the town once known as Woodbury, the domain of the Governor (David Morrissey) back in season three. In reality, it’s downtown Senoia, a place that remains very much in active rotation for the Walking Dead cast and crew, if not the Walking Dead story, as the site of Nic and Norman’s, the restaurant co-owned by Daryl Dixon actor Norman Reedus and executive producer and visual effects mastermind Greg Nicotero. Try to remember the unfathomably difficult journey Rick and his peers faced when traveling from the land near Woodbury all the way to Alexandria. It took a full season of travel, when in reality, the distance between the two communities is little more than a five-minute stroll away on foot. 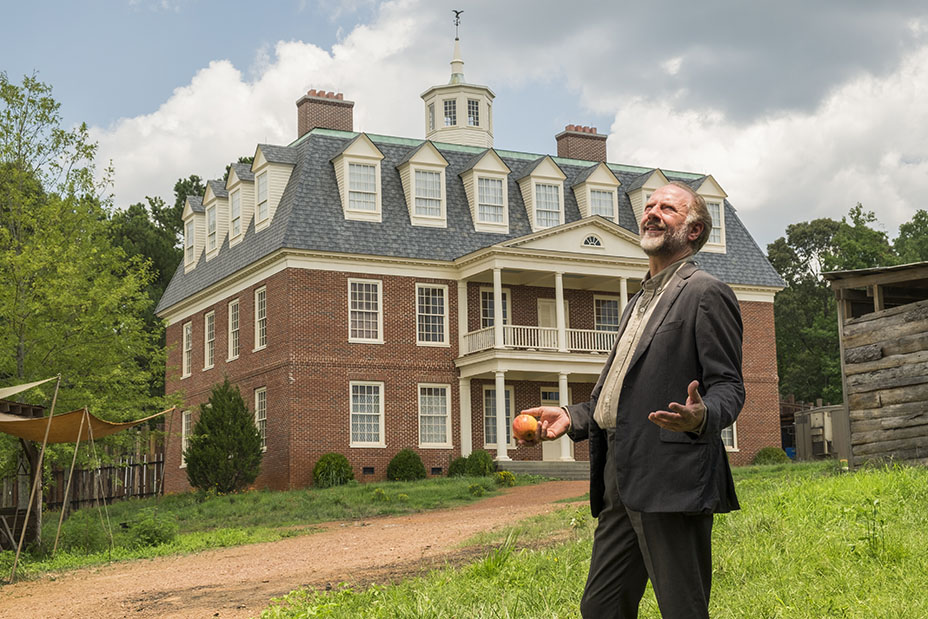 Many of the other realms in the Walking Dead universe are within walking distance of each other, too. The set of the Hilltop, with walls built to sustain winds of more than 100 mph (“Everything is built to withstand major storms and the test of time,” says Luse, making these comments many months before production was forced to temporarily shut down due to Hurricane Irma), resides just up the road from Oceanside, both communities fully built up with inhabitable structures. (The mansion at the heart of the Hilltop, however, is much more impressive from the outside than the inside, by design.) The virtual tour continues, as both the Hilltop and Oceanside exist right up the road from Glenn and Abraham’s death site, which itself is right up the road from the Heaps, also known as the junkyard that Jadis (Pollyanna McIntosh) calls her home.

The Heaps, by the way, is an impressive structure in and of itself, even if the story it protects has drawn its share of criticism due to the believability of the Heapsters. It’s a practical set, so much so that the arena where Rick battled Winslow the Walker actually exists within the labyrinthine construction. The Walking Dead crew built the set using crushed cars from a local junkyard, most of which predate the year 2010 so as to preserve the sense of time and place for the zombie apocalypse. The cars are bound together, covered in mud that’s frequently redressed — yes, even still, as the Heaps promise to remain in place for the coming eighth season. Prepare your bargaining skills accordingly. 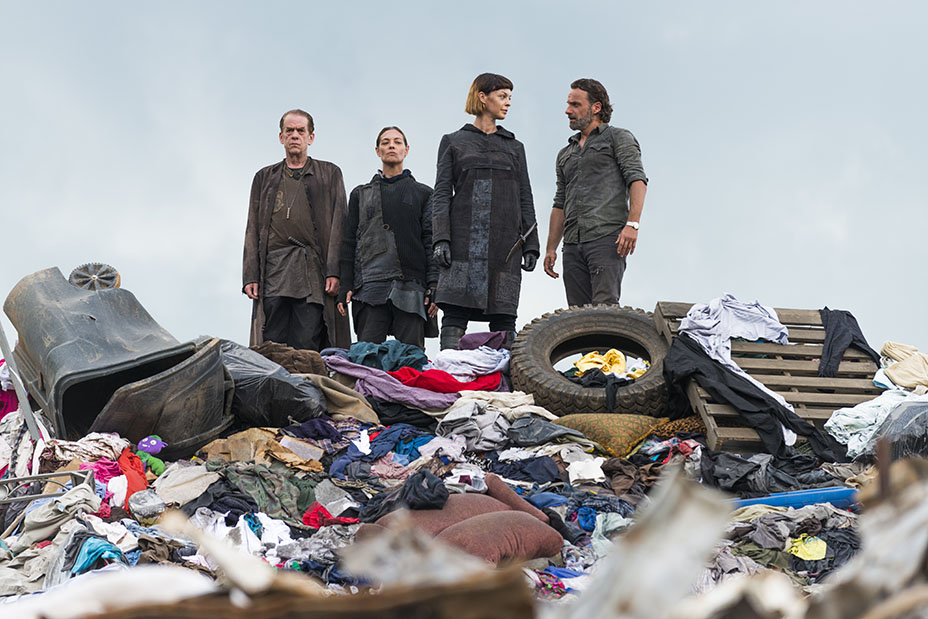 Several seasons earlier, another iconic location stood where the Heaps currently reside: the prison that housed Rick and his found family during season three and the first portion of season four, or at least the field that lurked beyond the gates. The actual interiors of the prison were shot on massive sound stages right up the way, which very much remain in use now, serving as the site of the Sanctuary, the home base for Negan and his cronies. As if the Saviors and the Heapsters coming in and ruining the Grimes gang’s lives wasn’t already vile enough on the show, the locations that house these characters are literally built on the grave of some of our heroes’ happiest days.

There are countless examples of this kind of interconnectedness throughout the Walking Dead set, a place that’s rich with history from the south — for example, an old dilapidated honky tonk, where locals “would dance and drink hooch” more than a century earlier, according to Luse, still stands not far away from where the Hilltop has been built. Indeed, the ancient bar has even been used as a shooting location for the series, though Luse declined to confirm which scene it was used for.

More than the local history, there’s a sense of internal history pulsating throughout the Walking Dead set, which honors the many men and women who have passed through the halls of the zombie apocalypse. A screening room in Raleigh Studios, marked by the “don’t open, dead inside” doors first seen in the pilot episode of the series, is flanked on all sides by portraits of the actors who have come and gone over the years in Walking Dead lore, from Jon Bernthal as Shane through Yeun as Glenn, and most every named player in between and beyond.

The room is used for screening footage, but primarily for table reads and production meetings — “lots and lots and lots of meetings,” Luse jokes — and one can’t help but appreciate the clear acknowledgement of the show’s own history. It’s an idea that’s reflected in how Luse and the others view the place where season seven’s stunningly brutal premiere was filmed, the same spot where two of the closest members of the Walking Dead family walked away forever.

“Losing two of our favorite people there,” Luse says about the site that hosted Yeun and Cudlitz’s final scene, “has made it a shrine for us.”

Follow THR.com/WalkingDead for interviews, news and more coverage in the lead-up to the show’s 100th episode and eighth season, premiering Oct. 22 on AMC.