[This story contains spoilers for season nine, episode six of AMC’s The Walking Dead, “Who Are You Now,” as well as the comic books on which the show is based.]

“Where are they? They must be close…don’t let them get away.”

Threatening enough words on their own, but in context, they form perhaps the single scariest closing line in The Walking Dead history. The first post-Rick episode of the series, “Who Are You Now,” ends with Eugene (Josh McDermitt) and Rosita (Christian Serratos) huddled together in the mud, hiding from a huge herd of walkers — walkers that can speak, apparently.

'The Walking Dead' Reveals First Look at Its Next Threat: The Whisperers

As the aforementioned 12-word phrase hisses forth from the passing army of the dead, it’s hard not to wonder how Eugene and Rosita didn’t die immediately from fright. Their stunned silence speaks volumes, both for the characters who inhabit the Walking Dead universe, and fans who have watched from a comfortable distance for several years. Sure, while some stylistic differences certainly exist between the walkers of season one and the walkers of season nine, the fundamental rules of the zombie remain: they eat people, their brains are their weak points and they lack any shred of the humanity they left behind — sentence structure included.

So, what’s going on here? A little more than 10 years of story time into the zombie apocalypse, can the dead speak all of the sudden? The short answer: no. The longer answer is ahead, and contains comic book spoilers, so proceed with the same level of caution you would exercise around this guy. 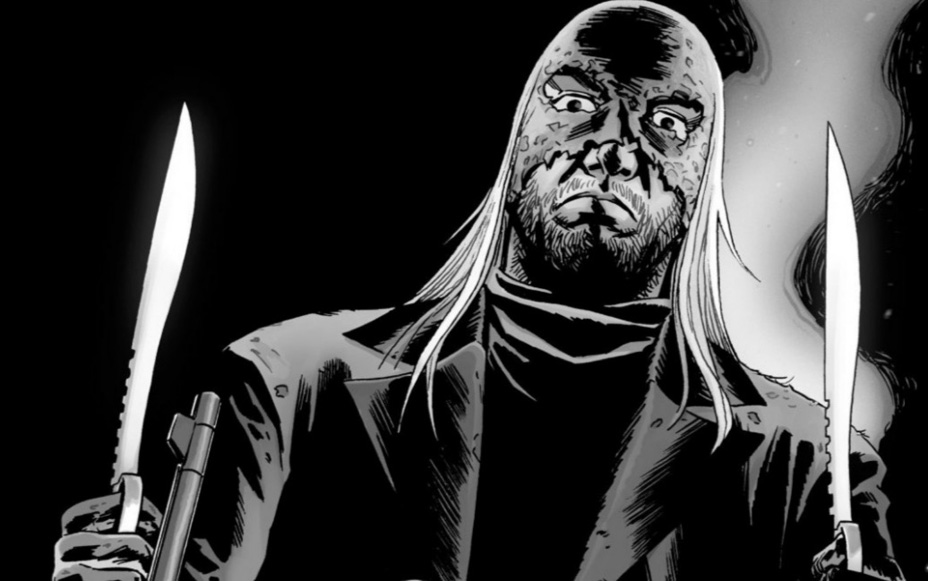 In Robert Kirkman and Charlie Adlard’s Walking Dead comic book series, Rick (Andrew Lincoln) and the gang eventually stumble upon a new group of opponents known as The Whisperers. These men and women have survived the fall of civilization by essentially blending in with the dead, wearing skin suits made from human flesh, and adopting savage customs that align nicely with the walkers. Led by Alpha (Samantha Morton) and her lieutenant Beta (Ryan Hurst), the Whisperers represent one of the most significant and unique threats in Walking Dead history — and at long last, their moment to shine has arrived on the show.

The Whisperer arc from the comic books began much as it did in the latest episode of the television series, with apparent zombies chattering in front of a group of survivors — not Eugene and Rosita, as on the show. Showrunner Angela Kang remembers the moment vividly, and hopes the end of “Who Are You Now” evokes similar responses from the audience encountering these enemies for the first time.

“This is one of my absolute favorite moments from the comic book,” Kang tells The Hollywood Reporter. “These issues were coming up while we were working on a prior season of the show. As we were reading the issue in the office, everybody was like, ‘Oh my god. What just happened? What is Robert Kirkman even doing here? What could possibly be next?'”

What’s next: death, and plenty of it. The Whisperers are responsible for the most vicious attack on the group since the arrival of Negan (Jeffrey Dean Morgan), one that even rivals the war with the Saviors in terms of barbaric brutality. Their first true act of violence against the Alexandria Safe-Zone is so severe, in fact, that the details should not even be spoiled here. Suffice it to say, there are two characters still actively involved in the Walking Dead TV series who do not survive the opening act of the so-called Whisperer War, a notion that’s even more devastating to consider given the characterization of these individuals in the new time-jumped status quo.

For anyone who truly does not care about spoilers, look no further for the identities of the show’s next potential murder victims. If possible, try to hold out; based on how Kang teases the arc, the deadly answers may reveal themselves sooner rather than later.

“There are some twists and turns to this story,” she promises of what’s coming up next with the Whisperers, “but there will be some answers by the time we get to the midseason finale. It opens up a Pandora’s box of other things. Hang on: it’s a really cool ride.”