Among the many reasons why he’s The Walking Dead‘s decisive breakout character, Daryl Dixon’s (Norman Reedus) status as a wild card ranks right near the top of the list.

(No. 1 is the hair, of course. The crossbow and motorcycle are tied for second.)

Unlike most of the other main characters on the AMC zombie series, Daryl does not have roots in the comic books created by Robert Kirkman and Charlie Adlard. There are no spoilers for when and how Daryl dies in the comics, because he’s not there. Likewise, there’s no guarantee of his safety, either, as there’s no single comic book event that predicts Daryl’s future. Kirkman has made it clear that he has no plans to bring Daryl into the comics, making him the king of the elite class of show-only characters.

But that’s not to say the comics don’t lay out a path for Daryl moving forward. While he’s absent from the paneled pages of the Walking Dead source material, Daryl’s current position on the show puts him in line to follow the comic book footsteps of another character: 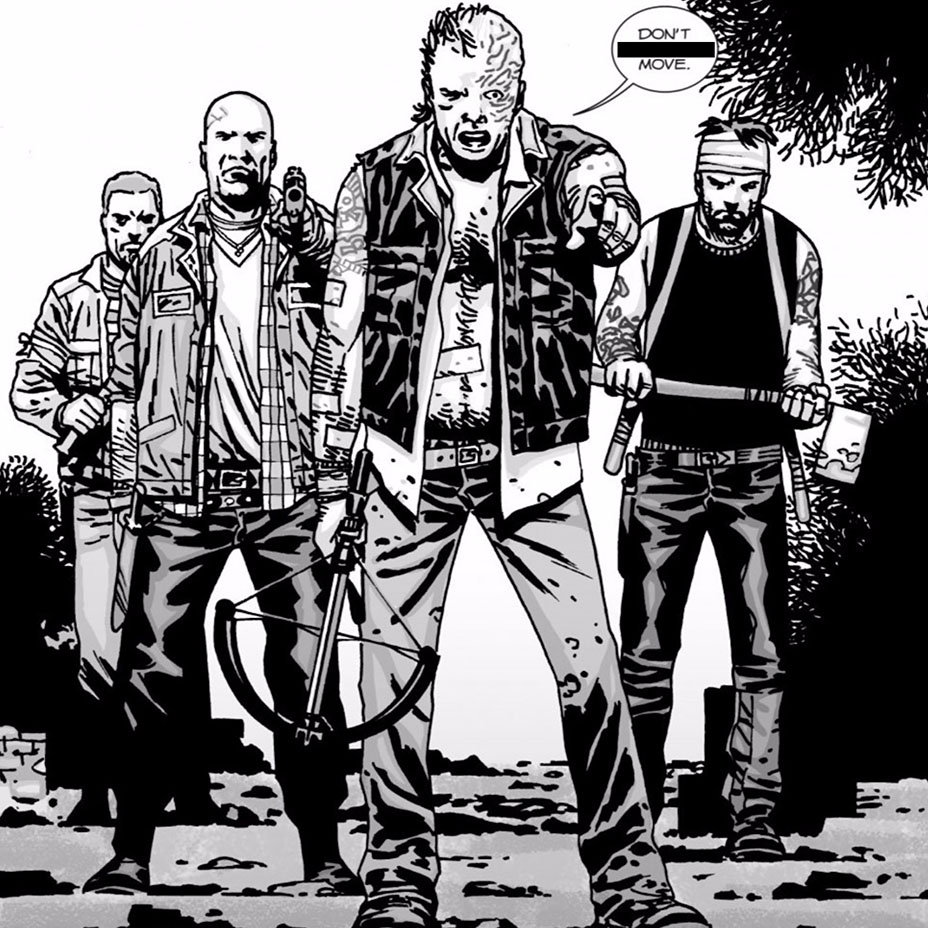 Recognize that guy? Hard to miss him by massive scar on the side of his face, right? That’s Dwight, played on the show by Austin Amelio, someone viewers have gotten to know a bit over the past several episodes of the series — from his first encounter with Daryl back in the early going of season six, to his fatal encounter with Denise (Merritt Wever), to shooting Daryl in the shoulder, and everything that’s sure to come next. Here’s a tease of that “what’s next,” based on Dwight’s journey in the comics, and how it might fuel Daryl forward.

Final warning: some major comic book spoilers are ahead.

In the comics, Dwight serves as one of Negan’s (Jeffrey Dean Morgan) topmost lieutenants … but only for a time. Given Negan’s methods, it should come as no surprise that not even the Saviors are uniformly pleased with their leader. Dwight stands out as the person with the greatest grudge against Negan, quietly nursing a vendetta until he finds a way of productively channeling his rage.

That moment comes when the Hilltop’s Jesus (Tom Payne) finally introduces Rick Grimes (Andrew Lincoln) to King Ezekiel (Khary Payton), ruler of the Kingdom. There, Ezekiel reveals a fourth ally in their shared cause: Dwight, ready and eager to turn the tables on his boss.

After an arc known as “All-Out War,” Rick’s people win the day, albeit with casualties along the way. Once the dust settles, the comic book jumps forward two years in time to show Alexandria and the surrounding communities thriving in a world without Negan. Well, technically, Negan’s not totally gone; he’s living out his days in an Alexandrian prison. But he’s no longer in charge of the Saviors. That job belongs to Dwight.

With all that out of the way, let’s rewind the clock a bit. In the lead-up to the milestone Walking Dead #100 — the same comic in which Negan beats Glenn (Steven Yeun) to death — dedicated Dead heads were speculating about the impending arrival of a character with a crossbow, based on the cover to The Walking Dead #101. Here, take a look: 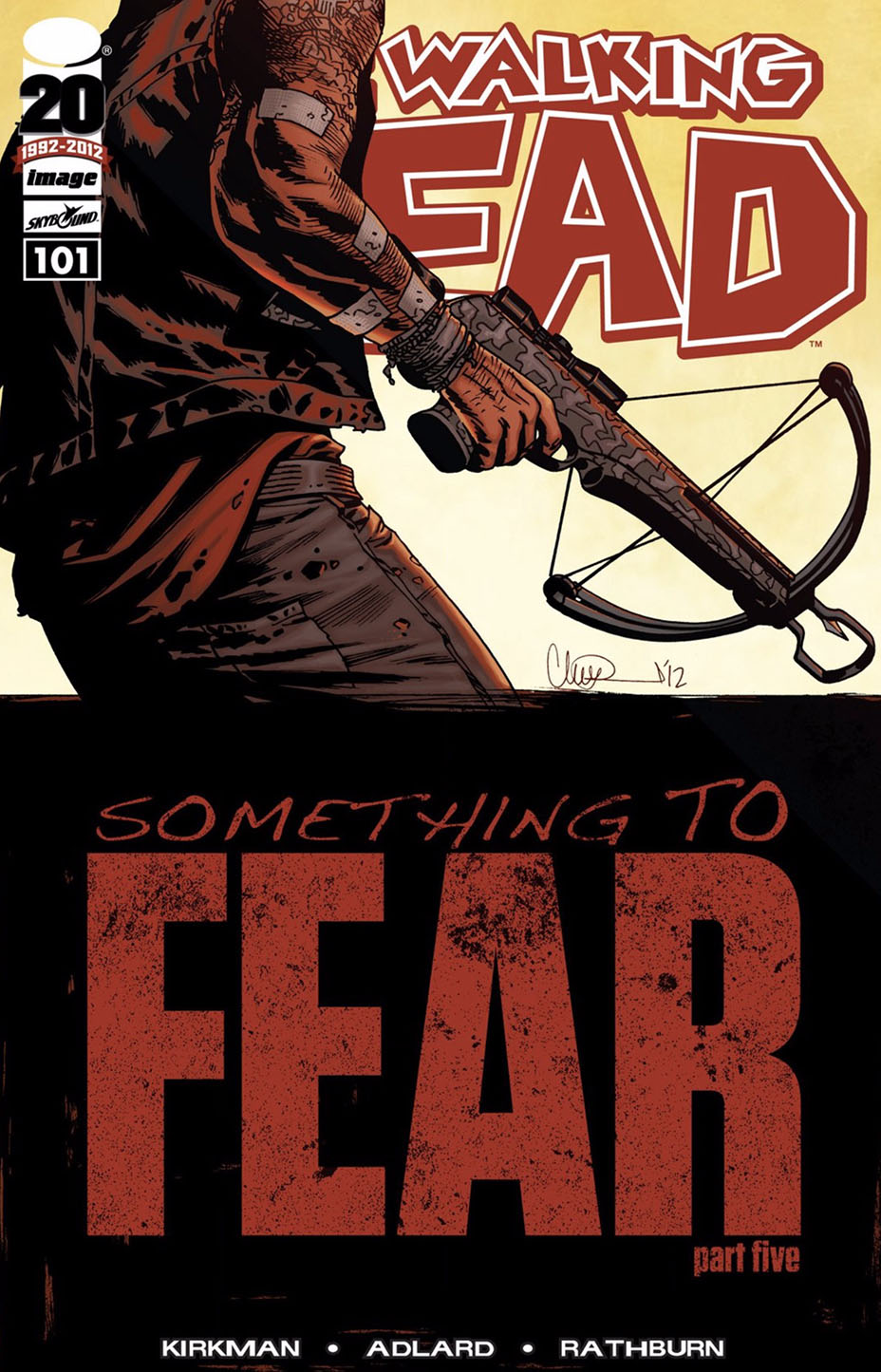 Many readers wondered if this was the comic book’s answer to Daryl Dixon. After all, he comes equipped with a crossbow; has to be the same guy, right? But no. It didn’t take long for Dwight to make himself known as a fully unique entity, and one of the more complicated figures in Walking Dead lore to boot. He goes from killing Abraham (Michael Cudlitz) and other Alexandrians to becoming a key force in the war against Negan, and eventually a beloved leader in his own right, however reluctantly.

Really, Dwight’s path isn’t so far from Daryl’s own arc. Like Dwight, Daryl began his Walking Dead journey on the outs with our heroes, overcoming internal and external demons before he owned his role as an integral member of the group — and even now, he still questions that role from time to time. He’s sure to question it more than ever due to his role in Glenn’s death. But every time Daryl falls, it’s followed by an eventual rise. What greater fall and climb is there than getting Glenn killed, falling into Negan’s hands, and one day destroying the man to become the new ruler of the Saviors?

While Dwight is one of the most alluring characters in the comics, many of his traits are already embodied on the show by the iconic Daryl Dixon. Given the show’s propensity to remix the comics and kill off characters who are still alive and well in the source material, it’s easy to see how Dwight might not play the same role he plays in the comics on the show, especially with Daryl around to pick up the proverbial and literal crossbow. Sure, it’s the iconic weapon for both Dwight and Daryl — but Daryl was here first.