Rumors of Rick Grimes’ demise have been greatly exaggerated. The Walking Dead hero did not die in his final ride through the AMC drama. Instead, Andrew Lincoln will continue playing the role, albeit in a new feature film series for AMC, far away from the world of Alexandria.

At least, we think he’ll be far away from the world of Alexandria.

Here’s the truth: Rick’s next steps are largely unknown, with only a few people clued in on the road ahead. Among those people: Scott M. Gimple, the Walking Dead franchise’s chief content officer, who served as showrunner for several seasons of the flagship series. In addition to his larger role overseeing the Walking Dead brand, Gimple is writing the script for at least the first Rick-centric film, if not all three of them. Speaking with The Hollywood Reporter, Gimple dropped the first major spoiler for what to expect from the new movie series: Rick’s not going to die — at least not right away.

“I’m going to give you a spoiler here: he does survive,” Gimple says. “Well, I’m going to say he’s in all three movies. I hate going that far, but that’s crazy not to say.”

Easy enough: Rick Grimes is alive, and he’s going to stay that way. What more do you need to know? Perhaps nothing at all. Nonetheless, there are still some things to hypothesize about when it comes to the Rick flicks, such as… 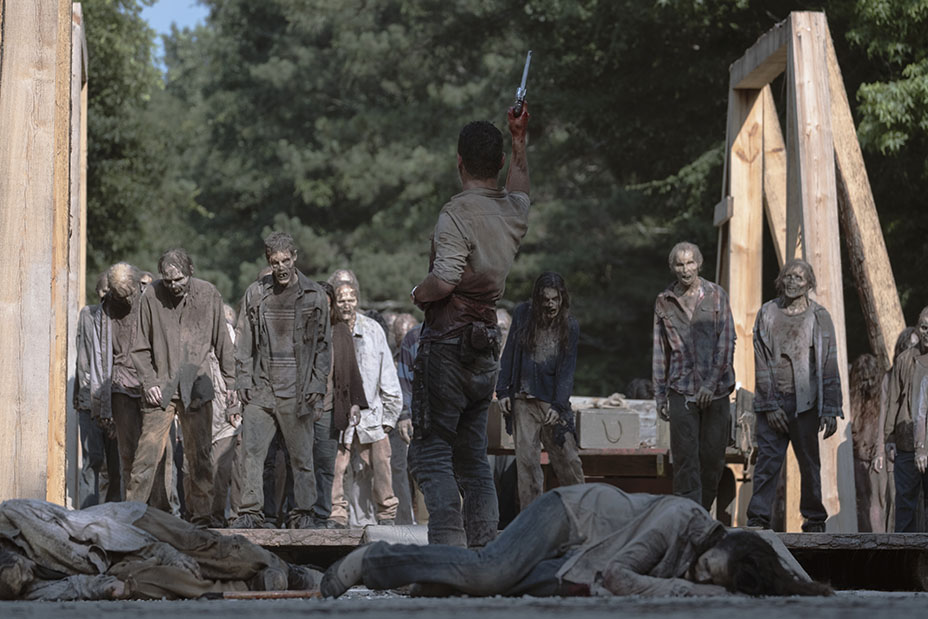 What was up with Jadis (Pollyanna McIntosh) and all the talk about “A or B” types of people? Expect that question to have a firm answer when Rick Grimes next arrives in the Walking Dead universe. As Gimple explains: “That serves the overall story to this next story that we have for Rick.” Gimple first introduced the helicopter community in season eight of The Walking Dead as Rick waged “All-Out War” against Negan (Jeffrey Dean Morgan) and the Saviors. Showrunner Angela Kang confirms we have seen the last of Jadis in season nine, as she flew off for parts unknown alongside Rick in his final episode; she’ll factor into Rick’s next adventure as well.

Lincoln left The Walking Dead proper in order to spend more time at home with his family in England. It opens the question: could Rick resurface next in an international setting? As compelling as it sounds, don’t expect Walking Dead: London as the title and location for Rick’s new adventure. “London is unlikely,” says Gimple, “but you never know.” Recently promoted AMC programming president David Madden adds: “My guess is we’ll probably shoot somewhere in North America; it’s just probably easy to match some version of the terrain we live in.” Sounds like wherever Rick’s headed next, he’s staying on the same continent as his loved ones.

“We know Rick Grimes. He would want to be home.” So says Gimple, weighing in on Rick’s likely motivations in the forthcoming film series. In short, whatever’s coming next for the man, it’s almost certain that the number one goal on his mind will be a return trip back to Alexandria. Whether or not he’s successful in that mission? Probably not, given Lincoln’s departure from the flagship series. On the bright side, there’s certainly reason to believe a Rick and Michonne reunion is on the horizon at some point.

What could possibly prevent Rick from returning to Alexandria? How about a trip to outer space? No, wait, don’t leave! Hear us out: Fear the Walking Dead briefly introduced a storyline about an astronaut who survived the apocalypse, Robert Kirkman once wrote a Walking Dead lark in the comics in which Rick is in the middle of a space war, and there’s the song that bookended Rick’s journey in the series, Wang Chung’s “Space Junk.” This completely ignores Madden’s comment about needing to match the terrain of the main Walking Dead series, and it’s also at least somewhat ridiculous, but the very idea of Rick Grimes getting his Walking Dead space jam on is well worth the price. Besides, the show has already jumped the dumpster; how much more harm to the brand could a hard turn into science fiction cause?

Rick Grimes: Space Marine isn’t a likely direction for AMC’s original films, as much as one would like to will it into existence. (It’s me; I’m the one.) But there are other outside-the-box possibilities for the Rick spin-off, with roots in the comic book series. For example, Saga and Y: The Last Man author Brian K. Vaughan once wrote a Walking Dead one-shot that centered on Rick Grimes’ brother, stranded in Europe. Could Rick’s brother appear in the “A or B” storyline? Perhaps Heath (Corey Hawkins) will make his long-awaited comeback via the Walking Dead film series? For now, all we can do is speculate on all the wild scenarios until AMC announces the next steps for the zombie-killing hero.