In forecasting the season ahead, The Walking Dead star Andrew Lincoln told THR to expect “more Lord of the Rings than Lord of the Flies.” And to that end, things certainly take a turn for the Tolkien in this week’s coming episode, “The Well.”

The second installment of the AMC zombie drama’s seventh season introduces viewers to a community called The Kingdom. In fact, this fantasy world of sorts already exists on the show: Morgan (Lennie James) and Carol (Melissa McBride) encountered a modestly armored soldier on the road during the season six finale, and he’s just the tip of the iceberg as far as the Kingdom’s odd allure.

The Kingdom comes straight out of Robert Kirkman and Charlie Adlard’s comics, introduced well after Walking Dead was already on television. With that in mind, this story’s existence on the page serves as almost a direct challenge to those bringing the comic to life onscreen. It’s a community filled with good men and women, fierce warriors who model themselves after knights, and a benevolent ruler in the form of King Ezekiel (Khary Payton). Although Ezekiel boasts something of a holier-than-thou aura, all the more pronounced due to his Shakespearean dialogue, he’s perhaps not as pretentious as he appears at first glance.

His tiger, though? That thing is real. Not a euphemism, not a code name: Ezekiel owns a literal tiger. Her name is Shiva, she adores Ezekiel, and she’s a devastating killing machine if anyone gets in her king’s path. Of all the material in Kirkman and Adlard’s comics, Shiva was seemingly created specifically to poke at the Walking Dead show, an unspoken dare to adapt the unadaptable. But Greg Nicotero and his KNB EFX team accepted the challenge and brought Shiva to life through a combination of animatronics and digital effects. Whether or not their efforts pan out? That’s an outcome to be determined after the episode airs.

In the comics, readers are introduced to the Kingdom through Jesus (Tom Payne) and Rick (Lincoln). As a leading member of the Hilltop, Jesus already knows Ezekiel rather well, and decides to introduce the royal man to Alexandria’s leader. After all, each of the three communities has one very big problem in common: Negan (Jeffrey Dean Morgan). Much as he did with the Alexandrians, Negan has already imposed his rule over the Kingdom by the time we catch up with that story. Although he comes across as a Negan loyalist on the outside, Ezekiel secretly harbors plans to break away from the Lucille of it all … and he’s looking to Rick for help. 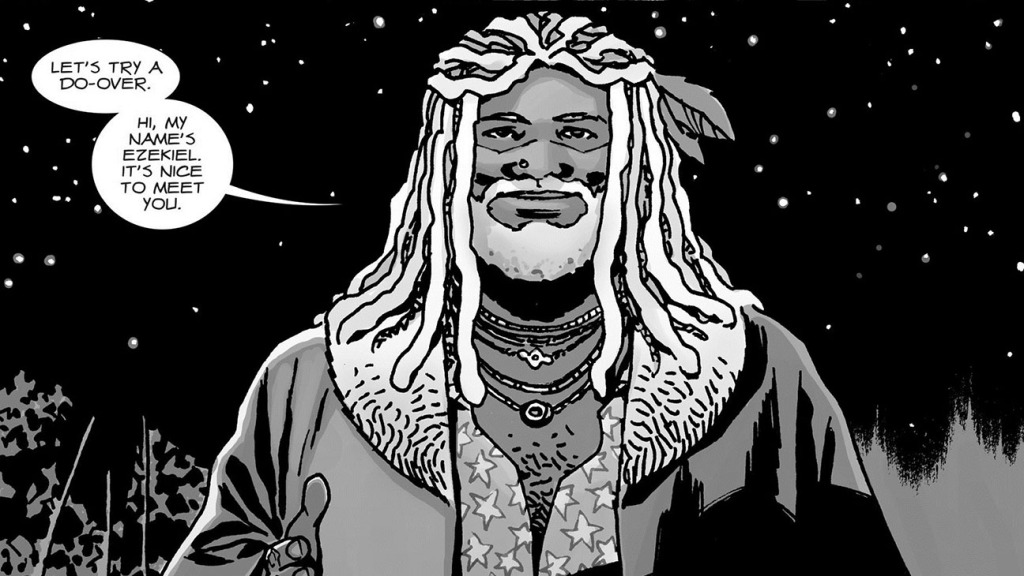 Whether that alliance bears out on the show remains to be seen. For now, two other main characters will serve as the audience’s eyes and ears in the Kingdom: Morgan and Carol. These two are on very different sides when it comes to the ethics of killing in the zombie apocalypse — though perhaps they’re both a bit closer to center on the issue, given Carol’s emotional breakdown toward the end of season six, and Morgan’s decision to kill a Savior in order to save Carol’s life.

For Carol, after spending a full season questioning her desire to go on in the apocalypse, the Kingdom represents a form of hope. In the comics, Ezekiel and Michonne (Danai Gurira) embark on a relationship, bonding over the emotional walls they both hide behind. Since Michonne is otherwise spoken for on the show, some fans are wondering if Ezekiel will attempt to woo Carol instead — which would be a sad prospect for Tobin (Jason Douglas), Carol’s Alexandrian boyfriend.

The Kingdom represents a major test for AMC’s The Walking Dead. How will viewers react to the sudden injection of Game of Thrones into the zombie apocalypse? Will Ezekiel’s dramatic flourishes land with applause, or with tomatoes thrown at the stage? How will Shiva play out in live-action? Will the community’s introduction expand the Walking Dead world in directions fans are willing to go? Expect answers to most, if not quite all, of those questions when season seven resumes on Sunday.

Follow THR.com/WalkingDead for more news, analysis and interviews revolving around the zombie apocalypse.