As leading man Andrew Lincoln (who plays Rick Grimes) prepares to exit AMC’s The Walking Dead, Norman Reedus (who plays Daryl Dixon) is negotiating a $20 million deal to hover at the top of the call sheet on one of TV’s most-watched dramas.

While the writing for Lincoln’s departure may have been on the wall, the news has left stunned viewers asking one question: How could a loner like Daryl ever become the next leader of the apocalypse?

Daryl’s popularity, after all, has long relied on his brooding charm. He’s not the type that takes control of a group. In order for this character arc to be plausible, Daryl needs a major story development to trigger the change. One thing that would do the trick is a theory that’s been circulating fandom for years: Daryl is gay.

Giving him a coming-out story in the forthcoming season nine, centered around a relationship with Aaron (played by Ross Marquand), would make the transition convincing while also bringing compelling character drama back to the show. Here’s why it would work:

Could 'Walking Dead's' Daryl be Gay?

1. It Would Give Daryl a Compelling Storyline Again

Let’s face it, Daryl hasn’t been interesting since season three. While he used to intrigue viewers with his moody, complicated loyalties which sent him blindly searching for Sophia (Madison Lintz) and struggling to love Merle (Michael Rooker), all viewers have seen him do lately is eat dog food and make bad decisions. Introducing a nuanced love interest would call back to The Walking Dead‘s glory days when characters were multidimensional and had more to do than decide whether to kill people.

2. It Would Explain His Metamorphosis Into a Leader

The biggest problem with Daryl becoming the next leader is that it runs entirely counter to his character. Partnering with Aaron would offer an explanation for the change. On an emotional level, a consequential relationship gives Daryl something to fight for. On a practical level, it explains how he acquires the interpersonal skills necessary to succeed at this role. Aaron was a diplomat prior to the apocalypse. He is measured and reasonable where Daryl is reckless and hot-headed. A romantic union would explain how a quick-tempered, inarticulate guy like Daryl becomes capable of leading a civilization.

3. The Apocalypse Is Going to Need a New Power Couple

With Rick and Michonne (Danai Gurira) poised to come to an end, this world is going to need a new king and queen of the apocalypse. Glenn (Steven Yeun) and Maggie (Lauren Cohan) are long over. The show hinted at a possible romance with Maggie and Alden (new series regular Callan McAuliffe), the do-gooding Savior she kept penned up throughout season eight, but Cohan’s time with the series is nearing its end, too. A Carol (Melissa McBride) and Ezekiel (Khary Payton) reign might be tenable if the latter’s Shakespearean king-speak weren’t so annoying. With both the Hillside and the Kingdom short on candidates, that leaves Alexandria — or what’s left of it — to produce the next heirs to the throne. Daryl and Aaron is the perfect choice. Fresh and edgy and perfectly balanced.

4. They Already Have a Bond

Aaron and Daryl have been going on runs together for three seasons. The bond has been building since their spaghetti dinner when Daryl first arrived in Alexandria. It was Aaron who first noticed Daryl struggling to acclimate and asked him to be a recruiter. It was Aaron who gave him his beloved motorcycle after he lost Merle’s while fleeing the prison. It was Aaron who was there when Daryl couldn’t save the horse — the same episode in which they discussed feeling like outsiders. It was Daryl, in the season five finale, who returned the sentiment, offering to sacrifice himself when their car got swarmed by zombies. When Aaron refused (“Make it or not, we do it together”), Daryl stared at him without speaking for no less than nine seconds. That’s like nine years in TV time. They almost had to kiss.

5. Aaron Needs Someone to Help Him Heal After Eric’s Death

With Eric (Jordan Woods-Robinson) gone, Aaron needs something to do besides wander around Oceanside, inexplicably starving himself. Partnering with Daryl would offer Aaron a relationship with texture rather than just pairing him with Jesus — the show’s only other gay male — a move that even Tom Payne has said would be lazy. Considering how underused Marquand is, it would be hugely satisfying to see him step into a bigger role.

6. The Show Has Always Been Vague About Daryl’s Sexuality

Viewers have speculated for years about Daryl being gay. Walking Dead creator Robert Kirkman attempted to quash rumors back in season five, but it wouldn’t be the first time the creators have said one thing and written another. There’s more than enough material to make a convincing argument that Daryl’s hillbilly upbringing kept him from divulging his sexuality or even understanding it himself. It would explain a lot of his brooding personality, not to mention the fact that he’s never had a love interest. Reedus has stated in multiple interviews he’d be on board with playing a gay Daryl, going as far as to say, “Hell yes, let’s do it.”

7. Carol and Daryl Is Never Going to Happen

There was a time when a Carol-Daryl union seemed possible … but that was six seasons ago. All viewers have seen in recent years is a friendship. Their hug on the porch after reuniting in “New Best Friends” was indeed poignant, particularly as Daryl’s voice broke asking why she left, but ultimately platonic — more of a mother-son dynamic than anything else. If a Carol and Daryl pairing is never going to happen, what does the show have to lose? 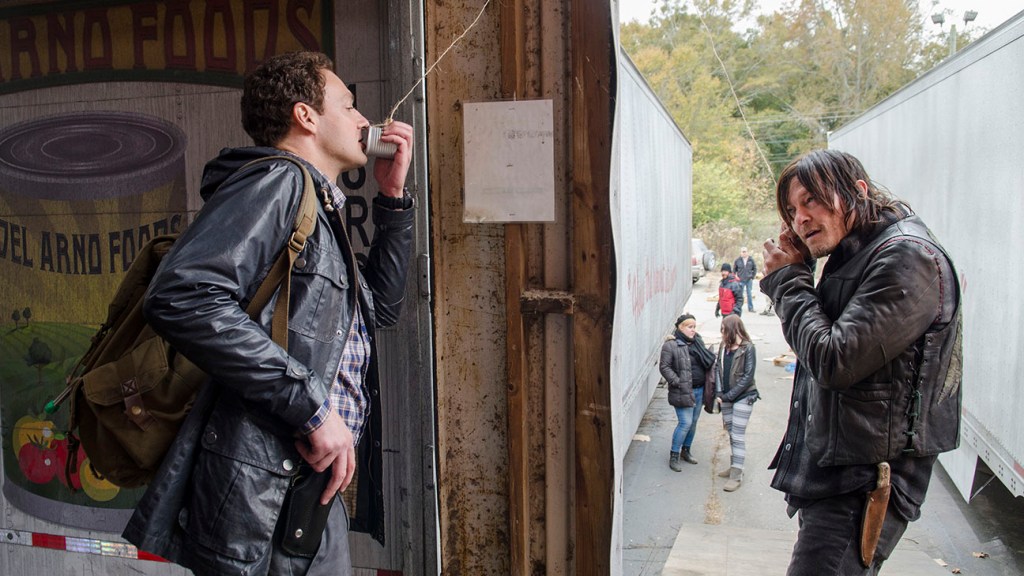