For season two of The Mandalorian, production relied heavily on an updated version of VFX house Industrial Light & Magic’s Stagecraft virtual production system, which involved projecting environments onto an LED wall on the stage.

Take, for example, forest planet Corvus, inspired not just by Dave Filoni’s script but by the environment in which he wrote it. “We were going through the wildfires in Northern California,” relates VFX supervisor Richard Bluff, whose work on the Disney+ series won a VFX Emmy a year ago. “What became apparent when we were going through that horrific time was that there was so much smoke in the air that the sunlight started to change color and was diffused through the smoke. That became part of the environment and the world that Dave created in that particular episode. We used a lot of references of what happens during wildfires.” 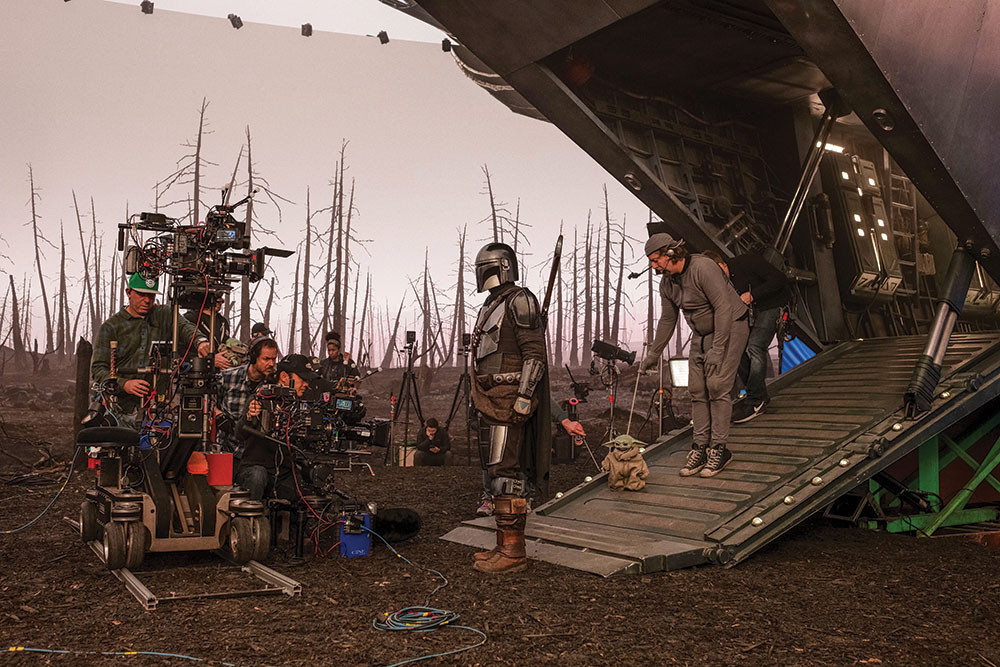 The “virtual art department” prototyped the layout of Corvus and did the pre-light. “Once we’d all experienced that environment in VR, well ahead of shooting, it would be turned over to ILM.” ILM created the photoreal CG environment that with the Stagecraft workflow was projected in real time on the LED screen on set, “and the environment perspective corrects to the camera [movement] rather than it just being a static backing.”

Bluff adds that the new version of Stagecraft gave the team more flexibility, for example, when it came to how they created atmosphere on set. “Effectively we had atmosphere, in CG, on the screens, that we could dial up or down with an iPad. [DP] Baz Idoine would work with the special effects team onstage and fill the physical volume with smoke until he reached just the right level that he felt gave us the mood and the atmosphere that we knew that we wanted. We would then dial in the LED screens to match the same level of atmosphere.”

As for Grogu (Baby Yoda), the little character once again was puppeteered as often as possible. “Unless it’s doing something that the puppeteer physically couldn’t do with the character, it’s largely practical,” Buff says. “And whenever we do CG, we are trying to mimic the limitations that you would get with the puppet to make sure that we’re never breaking that illusion.”

THE FALCON AND THE WINTER SOLDIER (MARVEL/DISNEY+)

This shot from the Marvel series’ truck-chase sequence is entirely computer-generated. “While we typically try to capture as much in camera as possible, this particular shot was too difficult to shoot practically given our limited shoot schedule,” explains VFX supervisor Eric Leven. “The production shot real trucks on Atlanta roads as reference; these trucks were re-created in the computer down to the last rivet.” Sebastian Stan (Bucky Barnes) and Desmond Chiam (Dovitch) were scanned to create their digital doubles. The CG work also incorporated 10 square miles of German autobahn, including roads, trees, cars and the landscape.

“Careful attention was paid to make sure the design and animation of the shot felt like it was captured by a real camera car, and the lighting needed to match surrounding live-action footage that was shot on a bluescreen stage,” Leven says. “Hundreds of tiny details included swaying mud flaps, wind rustling through Bucky’s hair and Dovitch’s clothes as well as cracked pavement, glints on taillights and depth of field that matches a real anamorphic lens.”

Paul Bettany, who plays “synthezoid” superhero Vision in the series, was filmed with special effects makeup and a bald cap “to replicate the hue and sheen of Vision’s skin,” explains VFX supervisor Tara DeMarco. “Makeup tracking markers were placed on the skin in the location of Vision’s metal crown, chin piece and Infinity Stone. In visual effects, we precisely tracked the head and all facial expressions. We added the CG crown with a metal sheen and slight VFX weathering. The Infinity Stone has a hint of a glow and a subtle interior movement throughout.” Vision also has CG panels embedded in the skin that the team composited into a cleaned-up version of the original actor plate.

These passes and elements were combined to form the finished shot. “We accomplished this work with two filmed elements,” DeMarco says. “Our first element is filming the actor in the set. The second element is a clean pass. We ultimately use quite a lot of the take with the actor and use the clean pass [of only Bettany in the frame] for a small bit of cleanup, like removing the actor’s ears. Synthezoid ear panels are smaller than human ears.” She adds that Vision is more robotic in the Avengers films and displays less emotion than in WandaVision, where he lives in the series’ sitcom environments. “The difference in acting style required additional subtle facial differences in the CG. We strived to maintain as much of the original performance as possible.”

In this shot from the HBO horror drama series Lovecraft Country, based on Matt Ruff’s 2016 novel, the initial plan was to shoot “a variety of dynamic reactions of [actor] Jordan Patrick Smith transforming into [actress] Abbey Lee and then graft secondary CG gore onto their faces for multiple quick shots,” VFX supervisor Kevin Blank explains. “When [showrunner] Misha Green suggested in post we should see one longer sustained cut of Christina bursting out of William’s face, it required us to lean into our CG digital doubles as the hero primary elements rather than secondary.” Blank adds that VFX house Important Looking Pirates and its VFX supervisor, Pietro Ponti, created the CG characters “and painstakingly animated and mimicked their performances beautifully.” 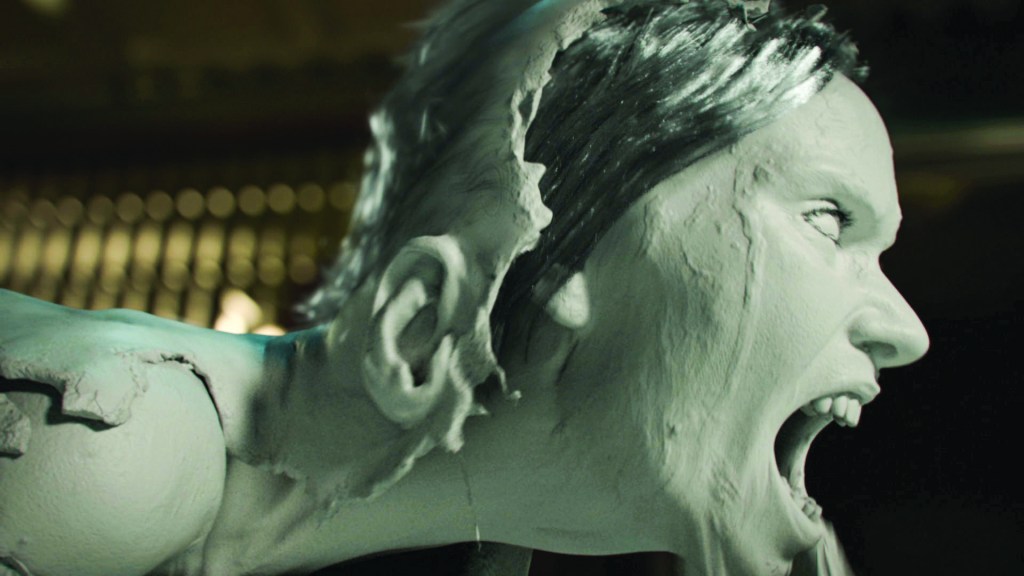 In this shot from The Boys, based on Garth Ennis and Darick Robertson’s comic book, “The big challenge with depicting Stormfront’s comeuppance was creating a believable severed arm and keeping her wounds grounded to our reality,” VFX supervisor Stephan Fleet says, noting that the work began with art from senior concept artist Luca Nemolato “that really helped us dial in how Stormfront would get cut up. We imagined her being lasered in a specific path that took off both her legs, an arm and also fried her face a whole bunch.” Work included prosthetics, augmented by adding “some wetness and puncturing into her eye more.”

Fleet explains that they needed a close-up to capture Stormfront’s emotion, as this was the end of her story arc. “We put a lot of energy into really nailing that arm stump,” Fleet says. “I chose to go with a gray glove on the day, instead of green, because I think gray gives us a more accurate representation of how the light falls. Aya Cash was great to work with, and we asked her to put her arm in such a position that she didn’t cross her face. Then we captured lighting reference. So much of it is about re-creating the lighting and transferring as much information about the location and the emotion of the scene to the vendor,” Rising Sun Pictures. He adds that the VFX house “did their homework on anatomy” and created and animated the arm stump.