[This story contains spoilers for season one, episode two of HBO’s Watchmen, “Martial Feats of Comanche Horsemanship,” as well as Alan Moore and Dave Gibbons’ graphic novel on which the show is based.]

“Nothing ever ends.” It’s not just the final line of “The Watchmaker’s Son,” the very revealing — if not quite riveting — play written by Jeremy Irons’ still unnamed mystery Watchmen character. It’s also one of the most iconic lines from Alan Moore and Dave Gibbons’ graphic novel from which the HBO drama extends.

It occurs in one of the closing scenes of the comics, as the highly intelligent Ozymandias (birth name Adrian Veidt, the man who may or may not be “the Lord of the Manor”) exchanges words with the highly powerful Doctor Manhattan (birth name Jon Osterman, the man who was definitely at the heart of “The Watchmaker’s Son”). Ozymandias seeks Manhattan’s approval over the so-brutal-but-so-brilliant-it-just-might-work plan to save humanity via false flag interdimensional squid attack, asking if he was right, given how everything worked out in the end. Cue the line from the erstwhile Jon Osterman, who exists in various points in time, leaving both Ozymandias and readers with those chilling words — the same words the Lord leaves at the end of his play, as suggestive of his true identity as anything else glimpsed in the Damon Lindelof drama thus far.

Of course, even more suggestive to the point of being definitive: Lindelof’s own assessment of the Lord of the Manor’s abilities as a playwright. As he tells The Hollywood Reporter: “By episode two, we’re not quite ready to tell you who Jeremy Irons is playing, except that he’s playing exactly who you think he’s playing — and while that person may be the smartest man on earth, it doesn’t mean he’s the best writer.” 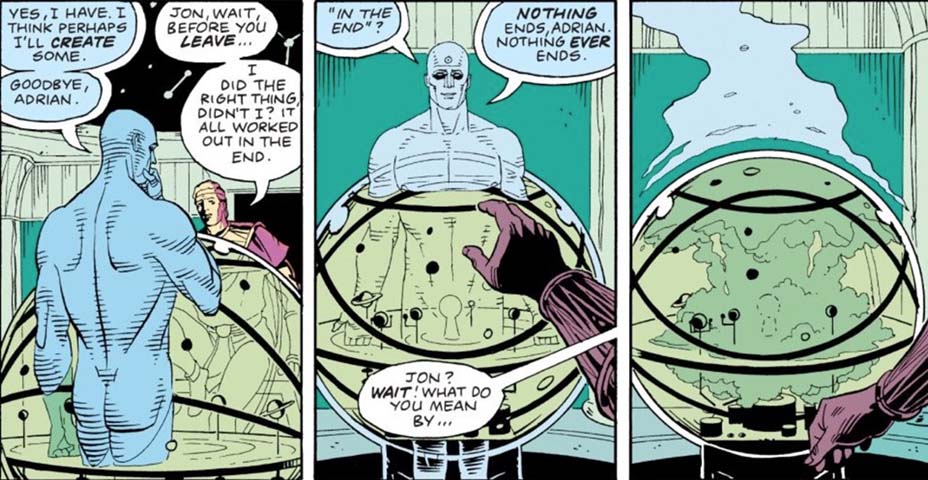 If and when an official Ozymandias reveal drops, expect it to land with the full impact of a tentacled monstrosity, even if a different appendage was front and center in HBO’s second week of Watchmen. It’s not just because of “The Watchmaker’s Son,” either, although that was certainly a big part of it. Beyond the play, Doctor Manhattan was name-checked throughout “Martial Feats of Comanche Horsemanship,” co-written by Lindelof and Nick Cuse, and directed by Nicole Kassell, who helmed the pilot as well.

The Doctor Manhattan of it all first arrives as early as the third scene of the episode, during a tense conversation between Angela Abar (Regina King) and the man who is soon identified as her grandfather, Will (Louis Gossett Jr.). For now, in this moment, Angela knows Will only as the man sitting next to the swinging body of her police chief Judd Crawford (Don Johnson), dead for reasons that are beyond her ken. Will insists he’s the man who pulled off the deed — “I’m the one who strung up your chief of police,” he says again and again. And when pushed on how he could pull it off, Will offers a theory: “Maybe I’m Doctor Manhattan.”

For her part, Angela immediately rebuke’s Will’s claim: Doctor Manhattan lives on Mars, and he can’t look like human beings. Will offers a rebuttal: Manhattan can make copies of himself, he can be in two places at the same time, he can be hundreds of feet tall, and he can change the color of his skin — all of which is true, based on what we see from the character in Moore and Gibbons’ graphic novel. As a refresher for those who haven’t read the comics in a while, or those who have never read the comics, here’s a very awkward scene where Doctor Manhattan duplicates himself and subsequently alienates girlfriend Laurie, set to appear in the HBO drama as played by Jean Smart: 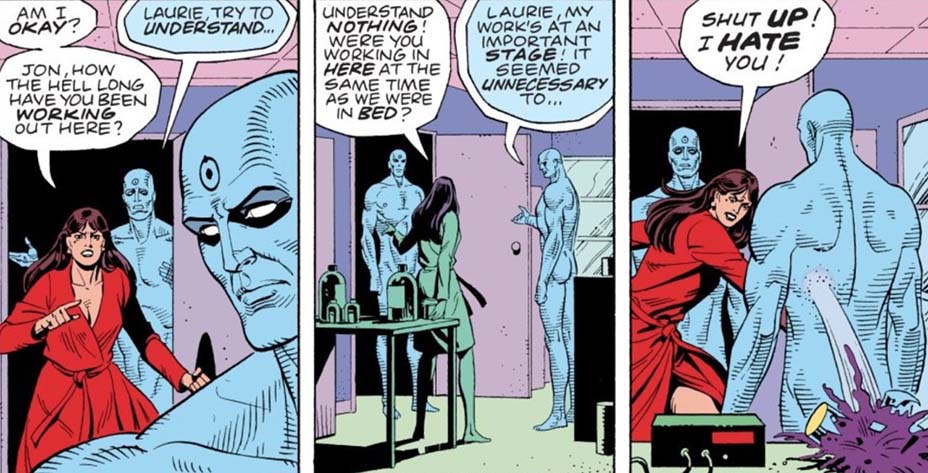 Before long, Will relents, saying he’s not Doctor Manhattan. Let’s believe him. But maybe we shouldn’t believe everything the show wants us to believe about Doctor Manhattan, especially the fact that he’s on Mars. At the end of the graphic novel, Manhattan declared his intention to leave our galaxy for a new one, where he would create life of his own. Why would he stay on Mars for 30 years instead, doing little more than creating and destroying structures, as seen in satellite footage in the series premiere — especially when we know he can create copies of himself and be in two places at the same time?

(As an aside, based on the other major reveal in “The Watchmaker’s Son,” do we think Tom Mison and Sara Vickers’ various Phillips and Crookshanks doppelgängers are the product of Manhattan’s project? Hard to say; if the Lord of the Manor and Ozymandias are the same person, he’s certainly treating his servants with the same callousness he’s exhibited toward individual humans in the past.)

'Watchmen' Exposed: Inside That Big (and Very Blue) Reveal

It’s worth putting a pin in the idea that Doctor Manhattan isn’t on Mars, or at least not entirely on Mars, considering Angela’s husband, Cal (Yahya Abdul-Mateen II), reiterates the same line about the atomic demigod’s existence on the red planet; if this is the common wisdom in a world where no one seems to know the true origins of the “squid rain,” then it’s not a leap to assume they’re wrong about the most powerful entity in the known Watchmen universe, too.

A couple of other notable comic book takeaways from Watchmen week two, which you can read about below or hear even more about in this week’s Series Regular: Watchmen podcast:

1. Will offers another theory about how he could have killed Judd: psychic abilities. In Moore and Gibbons’ text, Ozymandias creates his giant squid hoax at least in part using the brain of a psychic, so he can influence all the telepathically sensitive human beings around the planet. In other words, there’s at least a modicum of psychic ability in the world of Watchmen, and it’s worth paying attention to characters who might boast such a gift.

2. The “American Hero Story” sequences are rich with looks back on Watchmen culture, from the obvious focus on Hooded Justice (and even the rumors swirling around his true identity, which remains unrevealed and only guessed at in the canon), the brief mention of “War of the Worlds” via an alien hoax headline (a clear callout to the squid hoax) and the slow-motion violence that feels ripped straight out of Zack Snyder’s action-oriented 2009 feature film adaptation.

3. The graphic novel features several scenes set at a newsstand, with two men front and center: Bernard and Bernard, owner and client, both of whom begin forging a human connection just in time to die together when the squid arrives in New York City. “Martial Feats of Comanche Horsemanship” introduced a newsstand story of its own, complete with The Wire veteran Robert Wisdom running the operation. The scene makes mention of two specific newspapers of utmost importance in the Watchmen canon: the right-leaning New Frontiersman, which the late Rorschach worshipped; and the left-leaning Nova Express, Ozymandias’ paper of choice.

4. Also featured in the background of the newsstand scene, some literal comic book callouts, including X-O Manowar, created by Jim Shooter, Steve Engleheart, Bob Layton and Barry Windsor-Smith, as well as Bitch Planet created by Kelly Sue DeConnick and Valentine De Landro. Shows based on comics supporting comics! You love to see it.

5. Rorschach’s still very dead, even though his actions have clearly influenced the Seventh Kavalry, but there’s another heir apparent as far as the whole taking-masks-way-too-seriously thing: Looking Glass, played by Tim Blake Nelson. In week two, LG exhibits two behaviors commonly associated with Rorschach: snacking on the job (the peanuts in Angela’s glove, considerably more civilized than the raw beans Rorschach consumes at Nite Owl’s house in the comics) and wearing his mask at home when no one else is around.

6. Mad Men alum James “Not Great Bob” Wolk made his debut this week on Watchmen as Senator Joe Keane, aspiring presidential candidate. It’s not the first Keane we have encountered in the Watchmen universe. In the comics, the original Keane passed a piece of legislation that outlawed vigilantism.

7. In the Crawford household, Angela wears a pair of advanced goggles to assist in her search for clues about Judd’s death. The goggles are straight from Nite Owl’s arsenal, featured in the comic; there’s more about Nite Owl’s fate over in the ancillary material on HBO.com, should you choose to seek it out.

9. Closing out once again at “The Watchmaker’s Son,” two additional clues about the Lord of the Manor’s true identity: his horse is named Bucephalus, and he’s written a line of dialogue about “the Gordian Knot,” both of which are deeply connected to Alexander the Great, Adrian Veidt’s greatest inspiration in life. 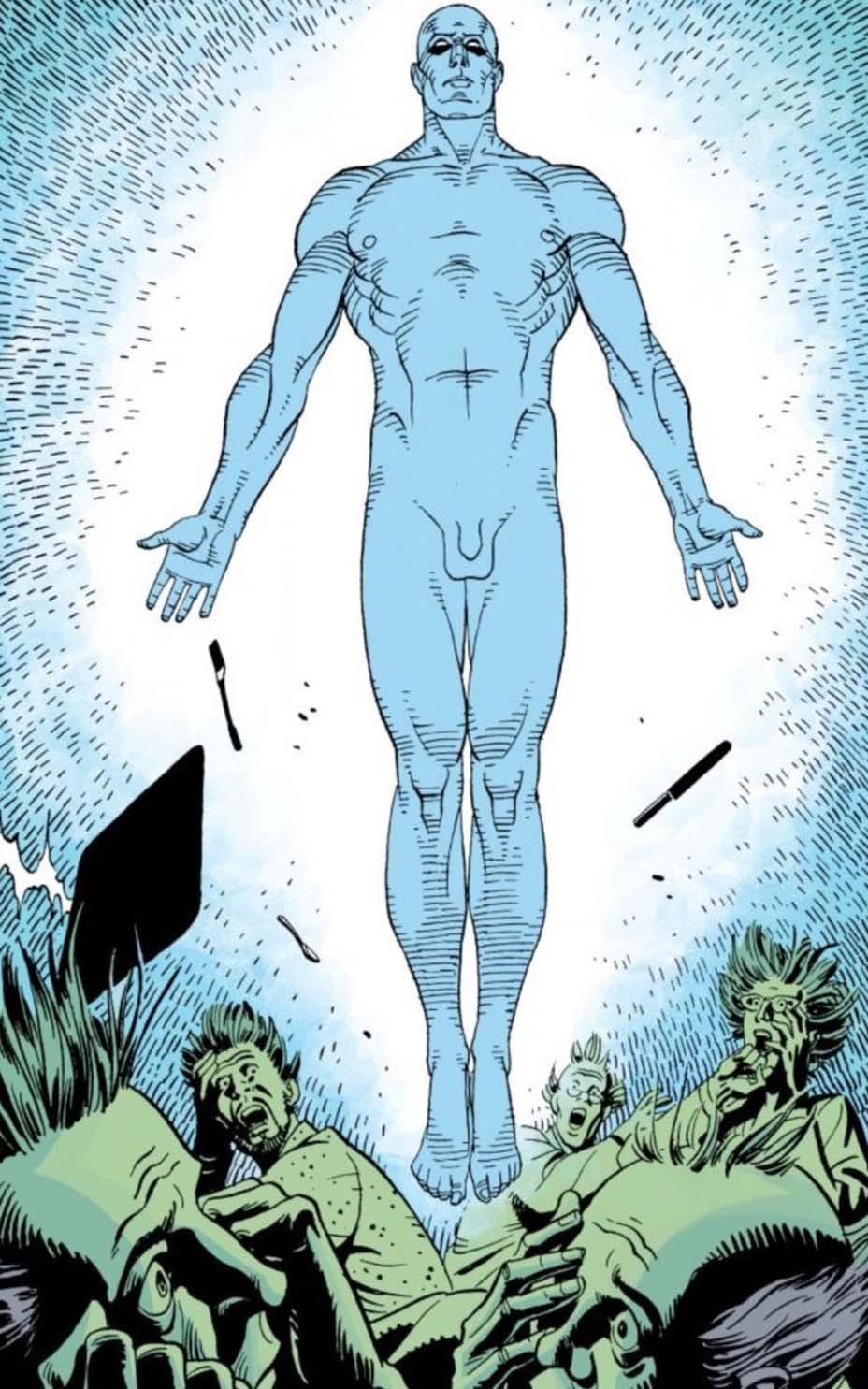 'TV's Top 5': Damon Lindelof Opens Up About All Things 'Watchmen'