[This story contains spoilers for season one, episode four of HBO’s Watchmen, “If You Don’t Like My Story, Write Your Own,” as well as the comic books from Alan Moore and Dave Gibbons on which the show is based.]

“I did it thirty-five minutes ago.” Iconic words for the Watchmen faithful, to be sure, spoken by Adrian Veidt (played by Jeremy Irons in Damon Lindelof’s HBO series) moments after dropping a psychically powered squid in the middle of New York City, killing millions and changing the world forever. The fourth episode of Lindelof’s drama begins with a different enigmatic billionaire’s arrival: Hong Chau as Lady Trieu, who drops a similar piece of dialogue while cradling a curious creation: “In anticipation of our negotiation, I took the liberty of creating your son.”

Not quite “save the world via mass-murdering cephalopod” levels of horrifying, but chilling words all the same, and ones that speak to the core of Chau’s Lady Trieu: she, like the erstwhile Ozymandias, is here to save the world — though her definition of “salvation” may differ greatly from yours, not to mention the denizens of the Watchmen universe.

Already mentioned on a few different occasions throughout the first three installments of Watchmen, Lady Trieu enters the world of the HBO drama as a fantastically rich futurist, one capable of creating a newborn baby from what was previously considered a failed attempt at procreation. She’s the architect of “the first wonder of the new world,” the mysterious “Millennium Clock,” built on the outskirts of Tulsa, Oklahoma. Trieu bought Adrian Veidt’s company some time after the man’s presumed death; whether or not she’s responsible for his current captivity in parts unknown remains to be seen, but feels likely.

Indeed, there are reasons to feel Lady Trieu’s connections to the Watchmen source material are greater than they appear at first glance, even though the character herself does not exist in Alan Moore and Dave Gibbons’ original tale. Those possible theories are explored in greater detail in the latest edition of the Series Regular: Watchmen podcast, which you can hear below:

By the end of “If You Don’t Like My Story, Write Your Own,” Lady Trieu’s true purpose remains unknown, though at least one of her allies stands revealed: Will Reeves, played by Louis Gossett Jr., quite literally standing despite previous appearances featuring the man depending on his wheelchair. “When family’s involved, judgment gets cloudy, feet get cold, deals get broken,” she tells Will, expressing concern for the man’s connection to his granddaughter, Regina King’s Angela Abar. At that, Reeves stands tall over Trieu: “My feet are just fine.”

Whatever the two of them are up to, the results will manifest in three days of story time. (“Tick tock, tick tock,” and all that.) The mystery remains exactly that for now, but here, we can at least illuminate some of the intentions behind Lady Trieu. Ahead, The Hollywood Reporter speaks with Chau about why she signed on for Watchmen, her view of Trieu’s ambitions, and why the character’s intense first scene with King wasn’t nearly as intense on set.

What did you know about Watchmen before signing on as Lady Trieu?

I knew nothing about the graphic novel. When I got the call, I came in and met with Damon, who told me the entire story of the graphic novel — which is a lot. I think I was in there for about an hour and a half, in that first meeting. I was like, “Whoa! Whoa! Who? What?”

Then he told me about his show, what he was doing, and how Lady Trieu fit into his vision. I knew a lot going into this. I knew where my character started. I knew her whole backstory. I knew where she was going and where she would end up. But of course, I still needed to read the scripts before feeling good about signing onto doing the show. I always like to throw myself into any role that I do and really swing for the fences. I needed to see the words on the page.

And once you read the words, clearly you felt good enough to sign on.

I did. Damon Lindelof has such a singular voice as a writer. I felt I understood the tone of the show and I was able to see the bigger themes outside of the narrow scope of my own character. I was able to see the scope of the show and what it was he was trying to bring up and play with. I loved that it had such a sense of humor for dealing with really big ideas, which can be very hard to do. I think a lot of people try to do it and they do it poorly, and they get slapped on the wrist for it. Damon’s super intelligent. Not only that, he’s a good listener. I felt comfortable being able to talk through even minor details about my character. He was very open to it. That’s not something you always get, especially on a big show like this, which is why I haven’t signed onto anything that has to do with a comic book or a graphic… IP? Is that what the kids are calling it?

I don’t think that’s what the kids are calling it!

(Laughs.) But you’re not really asked to participate and bring yourself to those things. You’re always in service to an IP. This was a different situation. It felt good. I was excited to join the cast. 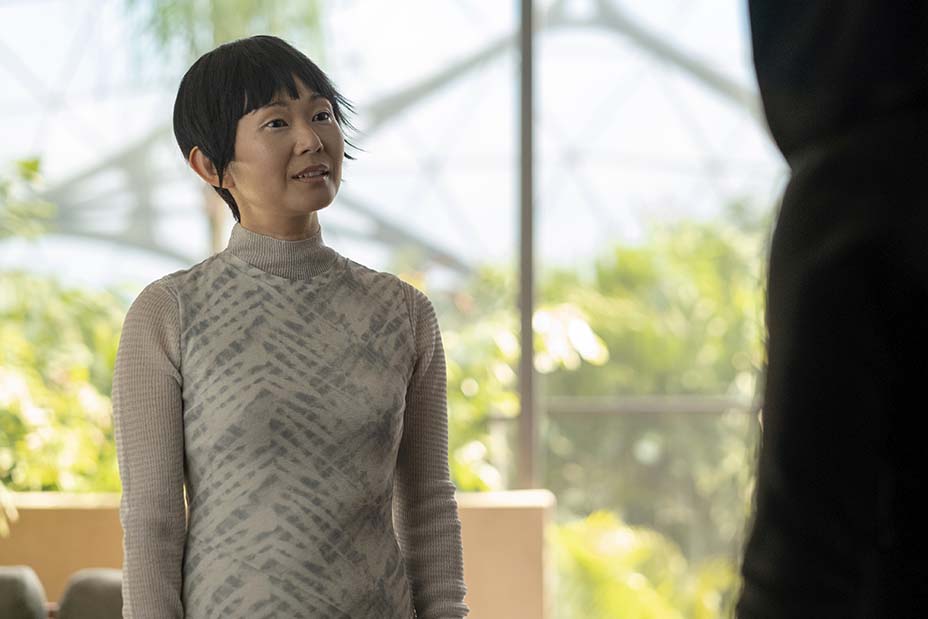 What was it about Lady Trieu that spoke to you — this mysterious character who is shrouded in secrecy, loaded with resources and can deliver a baby to you that you thought you never had?

Well, that’s it: she can deliver a baby to you that you thought you never had. I drew a lot of obvious inspiration from tech billionaires like Elon Musk and Mark Zuckerberg and Richard Branson. Also this Japanese scientist who is on the forefront of A.I. and is very eccentric. The thing with them is that they are all men. It was so nice to get to play this archetype — this modern day archetype who is a woman — and to see how that would manifest itself. The thing we’re talking about culturally outside of the show is what would a woman do differently in a position of power. Would it be different, though? It depends on the person. Lady Trieu is so many things. She’s really mysterious, and yet she’s everywhere. Her company logo is everywhere. All of the townspeople know who she is, even if they haven’t seen her. Getting to play a character like that was daunting, but also really fun. The thing I appreciate with Damon is he likes to deal in gray areas. This person isn’t a good person or a bad person. That’s how I approach the character. I don’t think about her as being good or bad. She does have a very lofty goal: save the world. You either have to be a fool or a force of nature. During the course of the show, you will see both of those things.

Whenever I get a call about something, I think, “Why me? Why am I there?” It was reassuring to hear Damon say that Vietnam was an integral part of the graphic novel, and that Lady Trieu was an organic extension of that. It wasn’t just some very arbitrary and deliberate attempt at throwing in diversity and representation: “Hey, we’re missing an Asian character! Let’s come up with someone!” It was completely organic to the story and necessary and purposeful. That made me feel good about signing onto the show, and getting to play such a ballsy character. It was fun. Scary, but fun.

Your first scene with Regina is a standout, with the two of them speaking to each other in coded Vietnamese “proverbs,” right in front of Laurie … how did you two arrive at that moment of tension, when everything else in the scene should come across as otherwise mostly peaceful?

It was hard to keep the tension because Regina was having a little bit of difficulty with the Vietnamese. (Laughs.) Oh my god, we were dying. I’m glad it still felt tense to you, because the actual filming of it? It could not have been more opposite.

Thankfully she had a mask. (Laughs.) That helped a lot. Thank goodness. It was really fun to see how all of the characters are connected on this show, finding out their histories, seeing how each person is trying to use the other person to their benefit. That’s how it really is in real life, right? Most of our relationships are built based on what we can gain from the other person, fortunately and unfortunately.

The end of the episode features Lady Trieu in league with Will Reeves, played by Louis Gossett Jr…

He was so great. The first day he came into the hair and makeup trailer, he had a little speaker around his neck and he was playing some old school jams. He had his baseball cap on. He’s such a light, the moment he enters any room. He’s such a great spirit. He’s one of those people where you think, “Gosh, I hope that I’m a thumbnail of who he is when I’m his age.” I just found out today that he started acting when he was 14. That’s a long time. He still has such a passion for it. It’s so wonderful to see. That’s not always the case with people who have been working for a really long time. He still has such a love for it. I really enjoyed doing those scenes with him. I just adore him as a person.

'Watchmen' Podcast: How a Deadly New Mystery Ties Back to the Comic Book