[This story contains spoilers for season one, episode eight of HBO’s Watchmen, “A God Walks Into Abar,” as well as Alan Moore and Dave Gibbons’ comic books on which the show is based.]

Directed by Nicole Kassell and written by Damon Lindelof and Jeff Jensen, “A God Walks Into Abar” deals with some of the biggest questions currently on the Watchmen board. How are Cal Abar (Yahya Abdul-Mateen II) and Doctor Manhattan the same person? How did he come to meet Angela Abar (Regina King) and fall in love with her? How did Hooded Justice (Louis Gossett Jr.) find out about Judd Crawford (Don Johnson) and his association with the Seventh Kavalry? Who built the expansive moon-based prison where Jeremy Irons’ Adrian Veidt is trapped? And what’s next for Ozymandias with just one episode remaining?

All of those questions are addressed in the penultimate hour of the HBO drama’s first season — yes, including that last one about Ozymandias, though viewers may not know it if they tuned out of “A God Walks Into Abar” prematurely. For the first time all season, Watchmen includes a post-credits scene, one that focuses squarely on Adrian Veidt, and sets up his collision with the season finale.

'Watchmen' Star on That "Once in a Lifetime" Doctor Manhattan Twist

The scene begins in the credits, as the voices of the various Phillips (Tom Mison) and Crookshanks (Sara Vickers) are heard asking: “Will you stay?” Veidt’s dry voice replies: “No.” Then a squishing sound is heard. When picture meets the audio, we see Veidt tied to a post, weathering tomatoes to the face each and every time he turns down the Phillips and Crookshankses.

Next, Veidt is in his prison cell. Along comes the Game Warden, also played by Mison. He and Veidt have a tense conversation where the Game Warden reveals he’s the first Phillips of them all, the one who watched Doctor Manhattan bring the greater Europa society to life. What’s more, he brings Veidt another cake, marking the man’s seventh anniversary on Europa. Apparently, Mr. Phillips insisted on the continued tradition. After the Game Warden leaves, Veidt opens the cake and finds something inside: a horseshoe, a totem that has lurked through the Veidt storyline all season long. Veidt howls like a mad man and starts slamming the horseshoe into the ground, a clear means of escaping his prison setting — the rock hammer to his Andy Dufresne, except if Andy Dufresne had absolutely no chill.

Listen to more about the post-credits scene in the latest Series Regular: Watchmen podcast.

What should we take from the post-credits scene, insofar as how it sets up the season finale, coming next? For one thing, the timeline still does not quite align when it comes to Ozymandias’ misadventures and all that’s occurring in Tulsa. In “A God Walks Into Abar,” Doctor Manhattan sends Veidt to Europa in 2009. The main events of Watchmen take place in 2019. The post-credits scene takes place on Veidt’s seventh anniversary, which means it takes place in 2016 — three years out before full collision with the Tulsa story. Given that he only has a horseshoe to work with at the moment, perhaps it takes Veidt a full three years to get off-world and back onto Earth, where he’s “needed.” Theories persist that Veidt actually crash-landed in Tulsa earlier this season, back in episode four, when Lady Trieu (Hong Chau) came to claim the Clark family farm just in time for an unknown object to crash in and burn. Is that Veidt? Is he already in Tulsa, or is his arrival at least imminent?

Many questions about the Ozymandias storyline are still up in the air, at least for those who caught the post-credits scene. For those who didn’t catch it, worry not: you’re not alone. Even Tom Mison, the Game Warden himself, was surprised to find out the tense exchange with Veidt took place in a post-credits scene.

“Except for a few of the technical bits we shot in Atlanta, all of my stuff was shot before Damon had even finished writing episode one for the rest of the cast,” Mison tells The Hollywood Reporter. “I was only getting the full scripts after I finished shooting 80-90% of my stuff. I decided I would watch the series as a fan, rather than read the scripts.”

Mison, Vickers and Irons were given their own scripts detailing only the Lord of the Manor scenes, then; as he bowed out of reading further scripts, Mison was unaware that this prison-based confrontation existed in a post-credits scene following the sprawling Doctor Manhattan origin.

“I figured, oh, no, they cut the scene,” says Mison. “I’ve been really bummed out for the last six months thinking the great scene with the Game Warden and Veidt was gone. But it’s in the post-credits, and I’m so happy!” 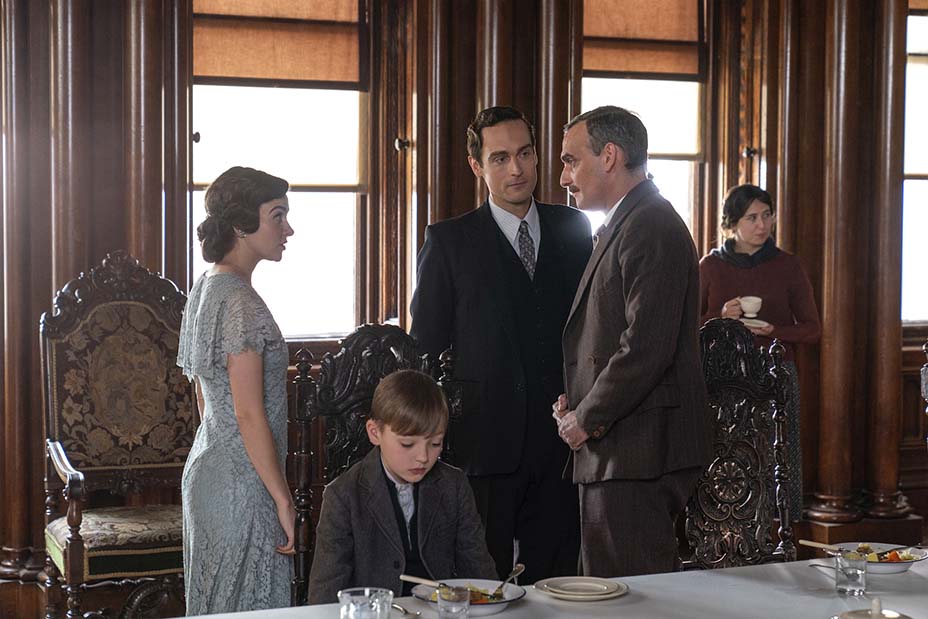 “With that scene, we tried it in lots of different ways,” he adds. “There was one attempt we tried that was almost verging on physical violence. The Game Warden was really going to go for Veidt. That didn’t seem quite right. There was another take where Jeremy was pissing himself throughout, finding it hilarious that this clone was daring to try to be human, and he found it hilarious. It was a really great day. We spent a long time on that scene. When you have something like that — a creation that came out of a lake, a person who was built from scratch, musing on deities and what it is to worship… where do you even begin with that?”

In the end, the version of the scene that made it to screen resides somewhere between the two tones Mison describes: the threat of physical violence lingers between the Game Warden and Veidt, the latter of whom boasts a jaded bemusement about the whole deal. It’s the second time in the episode that Mison appears as a fully-formed character; earlier, Doctor Manhattan reveals he based his very own “Adam and Eve,” also known as the various Phillips and Crookshankes, on a Lord and Lady of a manor he once visited as a child, and witnessed having sex. In other words, Mison plays two different “first Phillipses” in this episode: the Game Warden, and the man who inspired his likeness.

“There’s a lot in this episode that pays off a lot of the Phillipses who have come before,” says Mison. “Stephen Williams, who is one of our amazing directors, was there in Wales when we were doing the Lord and Lady of the Manor scenes. He said it was so nice to see Sara and I showing we can actually act as humans. We agreed that it was payoff for weeks and weeks of being robotic clones. You get used to the Phillips and Crookshankes being like that. Then you find out who they were meant to be: the Lord and Lady of the Manor. But Doctor Manhattan, who is one of the most supreme beings in comic book history — there’s no one quite like him — even he can’t quite get it right. He still can’t quite get life right. There’s something missing from the Phillipses and Crookshankes. When we were going into the Lord and Lady of the Manor scenes, we found that to be a really important distinction to find. Hopefully when you watch our performances, we’re definitely people, definitely human.”

Given what’s learned about Phillips and Crookshanks in “A God Walks Into Abar,” given the ending of the post-credits scene in which Veidt begins his latest prison break attempt, and given that there’s only one more episode left before the season wraps up — is there even any room left for more appearances from the Game Warden and his like? Who knows which versions of the character will appear, but Mison promises this much: “You will see me in the finale.” Lindelof, if it’s not too late, consider this an official request for a giant squid with a Phillips face to rise from Europa’s amniotic lake.