[This story contains spoilers for season one, episode eight of HBO’s Watchmen, “A God Walks Into Abar,” as well as Alan Moore and Dave Gibbons’ comic books on which the show is based.]

In “A God Walks Into Abar,” Yahya Abdul-Mateen II stands revealed as Doctor Manhattan, coming down from his virtually heavenly perch to fall in love with Regina King’s Angela Abar.

Featuring an additional set of memorable performances from Louis Gossett Jr. as Will Reeves and Jeremy Irons as Adrian Veidt (especially in the post-credits scene, which hopefully you did not miss), “A God Walks Into Abar” stands out as the decisive Doctor Manhattan hour of Watchmen — and major credit for its success goes to executive producer and director Nicole Kassell, who helmed the first two episodes of the series, in addition to the Manhattan spotlight.

Ahead, Kassell speaks with The Hollywood Reporter about what was involved in translating two dozen dialogue-driven pages set at a bar from test to screen, working with Abdul-Mateen II on developing a new look and sound for Doctor Manhattan, and why the episode feels like “one of the riskiest” moves of the series.

Listen to more about Doctor Manhattan in the latest Series Regular: Watchmen podcast.

At what point in development did you learn about the way Watchmen was handling the Doctor Manhattan story?

Because I was executive producing the whole thing, I was brought in at the beginning. I knew right away, from the get-go, who Cal actually was. When we were making the pilot, though, no one knew who Doctor Manhattan was, except for the writers, myself and a couple of very key crewmembers. Nobody else knew, and we kept it that way for a really long time. As we were getting closer to filming episodes seven and eight, we did extensive camera tests on Yahya to find the physical look for him, once he was revealed as Manhattan.

How much of a challenge was it to refine the final look of Yahya’s Doctor Manhattan?

It’s been an ongoing challenge! But in a good way. It was an exciting process of discovery. It was really about finding the right material, so the texture looked correct, and the right shade of blue. We wanted to play with it. We wanted Yahya to wear white contacts, but they were very inhibiting to performance and comfort. But once we saw him in the blue, the power of his eyes in that? It was overwhelming. It really astonished all of us. Quite early on, we decided that when his eyes went white, it would be a visual effect, and that we would only do that when he was activating his powers, whether making the kids vanish, making waffle ingredients float or blowing people up. (Laughs.) It’s pretty funny, all the things he can do. He can walk on water!

'Watchmen' Star on That "Once in a Lifetime" Doctor Manhattan Twist

What do you remember about your conversations with Yahya about how to turn the corner from Cal to Manhattan — and really, a couple of versions of Manhattan, as we see him in the bar scenes and then once he takes on Cal’s likeness?

We had multiple rehearsals, to find all of those nuances. One of the things I’m most proud of and really enjoyed in this series was the work with Yahya to find that character. It was one of the riskiest moves we made, having Yahya play that character with a different voice. We really had to do research to find that voice. It was a real process. We took the time to explore the different sounds and mannerisms, all of the subtle differences. We talked at length about who he was, where he was. I made sure to spend that time with him in advance, so that when we were on set, he was already where he wanted to be. For me, it was about giving him very subtle notes at that point. He took phenomenal care and effort with this character.

In reading the script for “A God Walks Into Abar,” was there one scene you were especially eager to dig into on set?

I love them all — it’s like picking a favorite child. The sequence in Karnak was incredibly delicious to film, especially with getting Jeremy and Yahya together. The bar was an incredible challenge, too. Those three days were probably the hardest days of filming. On top of doing all these wild action scenes, here we’re having to figure out how to do 25 pages of dialogue between two people at a table, without showing Manhattan’s face. It was insane. To me, making it a visual medium is essential, and that was handcuff upon handcuff upon handcuff. It was really fun to take that challenge on, though. 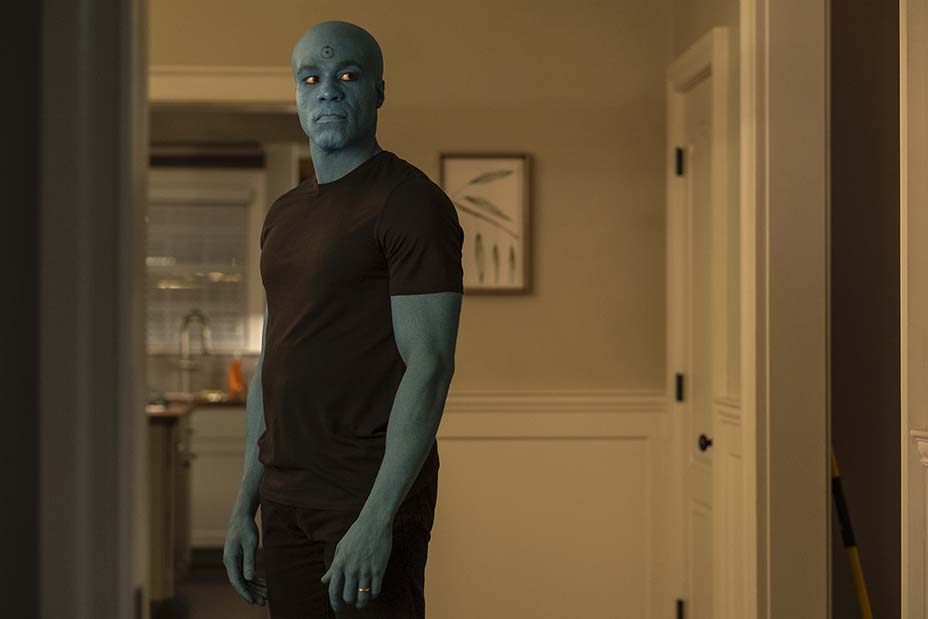 As you mention, we’re not seeing Yahya’s face during the bar scenes. How did you, Yahya and Regina King work together to hone in on the growing love story between these characters in this scene?

As with Yahya, I did meet with Regina to really go through the script. The thing for her is that we really wanted to capture the energy of someone 10 years earlier in their life. The chemistry was instant between Regina and Yahya. I didn’t have to handle that at all. When we first meet Angela, the last thing she wants is anyone’s company, or to be hit on, especially a weirdo in all blue wearing a blue mask. (Laughs.) It’s a very subtle journey she goes on in the present tense of the bar, from absolutely “dead no, go away,” to finally landing on, “Sure, I’ll have diner. What the fuck.” You want it to feel right that she’ll go there, but also not give away that she’s going to go there. It’s a really fine line to tread, but that’s the genius of Regina King. For this episode, those three days in the bar were really by far the toughest. Asking them to be off-book for eight to 12 pages per day so we could film sometimes three scenes from the same camera angle back-to-back-to-back…we really had to treat those pages almost as a piece of theater. It’s hard. It takes a lot. On a schedule where they’re coming straight out of episode seven without taking any days off? It was asking a lot of them. I tried to prepare them with what my filming plan would be, so we’re all agreeing to what we want to do and can do.

How much did you return to the graphic novel, especially the fourth issue, in preparing for this episode?

The script and the structure of the storytelling was absolutely deliberate, a direct homage to that issue. For me, I always pored over the book, looking for images from that chapter, but also scenes set at Eddie’s bar, because we are in Eddie’s bar [in this episode]. Also, when he goes to Karnak [in the final issue], I paid close attention to the imagery of Doctor Manhattan. Those exterior shots of him arriving at Karnak are a direct homage to the book.

Walking away from this episode and the greater season, what are some of the ways you feel Watchmen pushed you most as a filmmaker?

So many ways, and I’m sure I’m not even conscious of everything. I feel like there’s very little that I don’t have in my toolbox now. The biggest unknown for me on this was the visual effects work. My head exploded with the amount I was learning technically, in a very exciting way. I have the incredible fortune of having Greg Middleton as my cinematographer. He was the guy who did the dragon unit on Game of Thrones. His technical expertise was phenomenal, as was Erik Henry, our visual effects supervisor, and the artists at KNB special effects…really, learning those technical tools of when to know what should be a physical effect, when is it a visual effect, and how to work with both, and how to approach scenes that are almost entirely visual effects driven. I got to play on the biggest canvas with all of these different genres and styles, from American Hero Story to Tulsa 1921, to two people in a Saigon bar. Looking forward, I just have an incredible wealth of experience under my belt now.

'Watchmen': How That Post-Credits Scene Sets Up the Endgame

This interview has edited and condensed for clarity.

'Watchmen': How That Post-Credits Scene Sets Up the Endgame