Boy, that escalated quickly. A smidgen over 48 hours after the plan for a new European Super League featuring the world’s most glitzy and gilded soccer clubs was announced, the whole endeavor collapsed under the weight of its own hubris.

Late on a dramatic Tuesday, the “Big Six” English teams — Arsenal, Liverpool, Manchester City, Manchester United and Tottenham Hotspur — who had signed up as six of the 12 founding members of the “ESL,” had all announced they were pulling out of the project before a ball had been kicked. The withdrawal of the English sextet had effectively kneecapped the tournament and left the remaining clubs, Spain’s Real Madrid and Barcelona and the Italian trio of AC Milan, Intern Milan and Juventus, stranded.

One by one, as the pressure built throughout Tuesday, the English clubs released groveling statements announcing they were withdrawing from the ESL project, despite the supposed legally binding nature of the agreements they had signed. “As a result of listening to you and the wider football community over recent days we are withdrawing from the proposed Super League,” read Arsenal’s statement. “We made a mistake, and we apologize for it.”

Within hours, the nascent organization behind the ESL was scrambling to spin the epic collapse as more of a retooling, sending out a rushed statement with typos in Times New Roman on what looked like a screenshot of a Microsoft Word doc that added to the farcical nature of its demise. “Given the circumstances, we shall reconsider the most appropriate steps to reshape the project, always having in mind our goals of offering fans the best experience possible while enhancing solidarity payments for the entire football community,” the statement said.

Unsurprisingly, social media erupted with joy at the death of the ESL, with relieved fans, pundits, celebrities and rival clubs reveling in the schadenfreude. “Enjoying the Super League’s new knockout format,” the Financial Times‘ Henry Mance tweeted as clubs began to leave the competition one after the other Tuesday night. “Have to hand it to backers of a Super League. Takes a lot to make ‘World Cup in Qatar’ the 2nd worst idea ever in world football history,” tweeted Roger Bennett, co-host of NBC’s Men in Blazers.

The mockery was a far cry from Sunday, when all hell broke loose after the plans for the ESL were leaked in British newspaper the Sunday Times. Briefly explained, the ESL would see the establishment of an almost closed league of elite clubs, with 15 permanent founding members (the 12 announced and three more clubs yet to be revealed) and an additional five teams admitted each season via an unspecified qualification system. The ESL was planned as a direct rival for UEFA’s Champions League, with the member clubs still planning to play in their domestic competitions. Backed by J.P. Morgan, the ESL founding teams were set to earn $425 million just for signing up, more than four times what the winner of the Champions League earned in 2020. 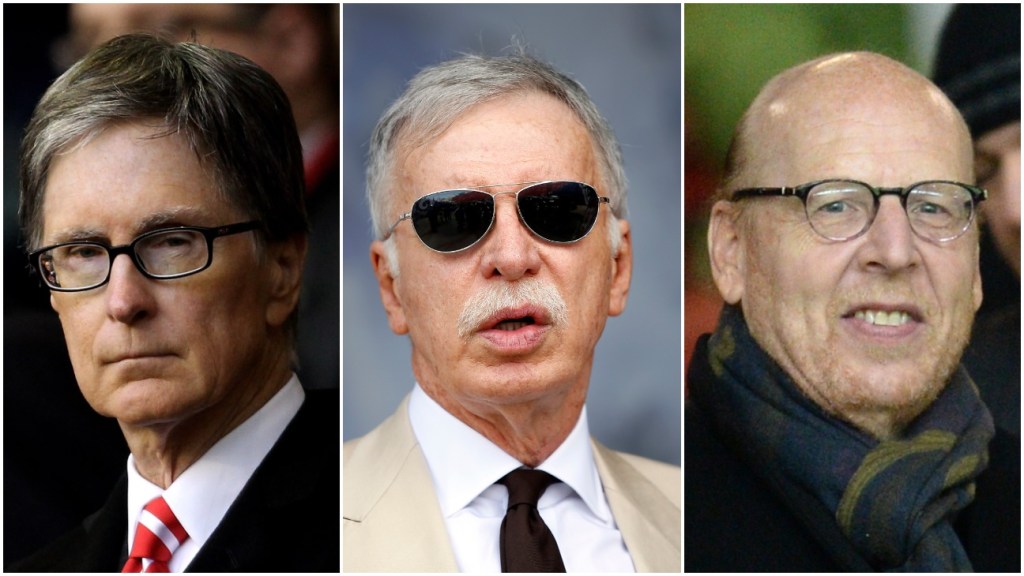 Aside from the obvious cash grab by the elite clubs, the move toward a more closed league, approaching the system more familiar in the NFL and NBA, would have had seismic negative repercussions for European soccer’s merit-based pyramid system, based on promotion and relegation, widening and locking in the gaping inequality between the biggest and smallest teams.

The key drivers behind the ESL, at least among the coterie of English teams, have been Arsenal, Liverpool and Manchester United, all clubs with American owners who also hold significant stakes in American sports franchises. According to press reports, Arsenal owner Stan Kroenke, who also owns the Los Angeles Rams and the Denver Nuggets; Liverpool’s principal owner, John W. Henry, who also has a key stake in the Boston Red Sox; and Manchester United owners the Glazer family, who own the Super Bowl champions the Tampa Bay Buccaneers, were keen to force through an NFL-style closed competition to boost earnings for their respective clubs after revenues took a hit due to the pandemic.

The news of the ESL, and its clandestine launch, led to an immediate and visceral backlash around the world, and set off a rollercoaster 48 hours. On Sunday, social media was ablaze with fans from rival teams as well as those from the founding teams expressing their shock and disbelief over how the clubs could commit to a project that threatened the existence of the Premier League as well as hundreds of smaller teams around Europe. Shock turned to rage very quickly, with fans also apoplectic at how the initial 12 teams were chosen, with clubs only drawn from three countries and the inclusion of billionaire-backed arrivistes like Manchester City and Chelsea, who had bought their recent success. Particular ridicule was reserved for Tottenham Hotspur, more commonly known as Spurs, a minor London club that has failed to win its domestic league since 1961, or the English F.A. Cup since 1991.

For centuries, Spurs fans will talk fondly of the 2 days they were members of the Super League. Treasured memory that will be passed down generation to generation

Alongside the fury of fans, ex-players, coaches and pundits — as well as politicians and celebrities — piled on the pressure, with networks in the U.K., Spain, Italy and elsewhere devoting hours of coverage and newspapers handing over their front pages to the news and the inevitable backlash. Former Manchester United star and Sky Sports pundit Gary Neville’s Sunday rant against the “disgusting” plans went viral on social media, with the ex-player articulating what many millions around the U.K., Europe and the world felt. “They’re breaking away to a competition they can’t be relegated from? It’s an absolute disgrace,” Neville said. “It’s pure greed.”

On Monday, scandal-plagued British Prime Minister Boris Johnson and unpopular French President Emmanuel Macron saw a cynical opportunity to distract from domestic political problems and heaped on more pressure, with the U.K. government dangling the prospect of a windfall tax on the six English clubs in the ESL, as well as changing visa rules to stop them from playing in the competition.

Later on Monday, Aleksander Ceferin, the president of UEFA, European soccer’s governing body, held an extraordinary press conference in which he described the 12 teams as the “Dirty Dozen” and executives at the ESL clubs as “snakes,” reserving most of his vitriol for Manchester United’s Ed Woodward and Juventus’ Andrea Agnelli. “I don’t want to speak much about Andrea Agnelli. He is probably one of the biggest disappointments or the biggest of all. I don’t want to be too personal, but the fact is that I have never seen a person that would lie so many times and persistently than he did. It was unbelievable,” said Ceferin, who had been so close to the Juventus man, a scion of the Fiat industrial family, that Agnelli had asked the UEFA president to be a godfather to his daughter.

“I spoke with [Agnelli] on Saturday afternoon, and he said that these are only rumors, don’t worry, nothing is going on, then he said I will call you in one hour and turned off his phone. The next day, we get the announcement.”

Ceferin added, “As I said, I have seen many things in my life but never this. Obviously, greed is so strong that all the human values evaporate. Everything is gone with some people.” 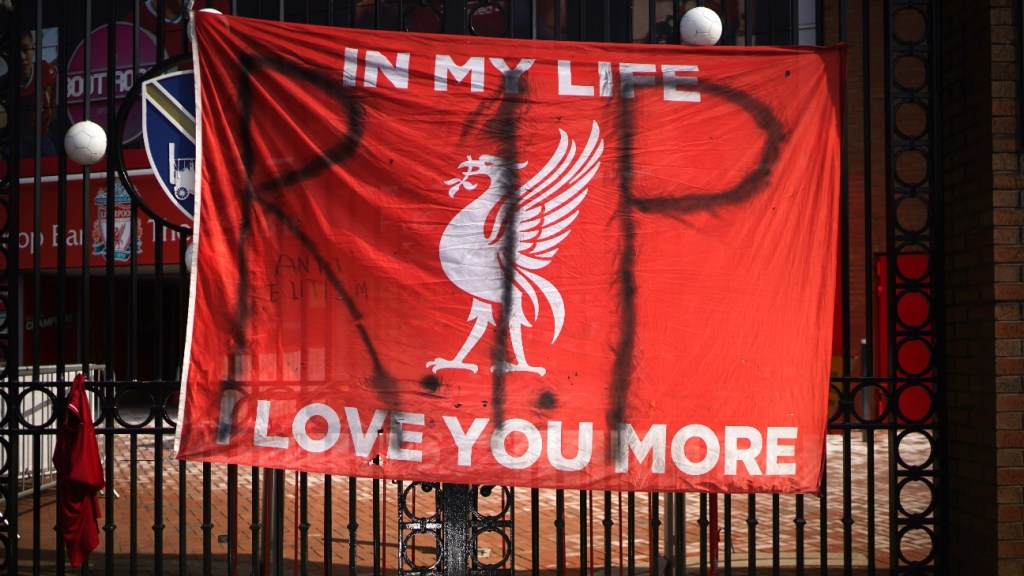 Throughout the day, fans of the six English clubs began to congregate outside their teams’ stadiums, putting up banners decrying the elitism of the ESL and the greed of the owners. Yet more pressure came when FIFA president Gianni Infantino, said he also strongly disapproved of the league. Seeing an opportunity to score cheap credibility points, broadcasters Amazon and BT Sport released statements that they were “concerned” by the lack of competition in the ESL.

In the U.S., where the ESL had failed to make the mainstream news outside of stories in The New York Times, the topic was discussed on The Late Late Show. Host James Corden, a U.K.-born lifelong West Ham United fan, made an impassioned plea against the “disgusting” ESL.

By Monday evening, with Liverpool set to play Leeds United in the Premier League, the Merseyside team and coach Jurgen Klopp were met with the sight of Leeds players wearing T-shirts emblazoned with the legend “Football is for the fans. Earn it,” a direct reference to the closed nature of the ESL. Before and after the game, Liverpool’s owners didn’t make an appearance or explain their position regarding the ESL and left Klopp and the players to face the media and field questions on the new competition and the backlash against it. Klopp confirmed the team had only found about the plans on Sunday. “I don’t like it and I don’t want it to happen,” said senior Liverpool player James Milner.

James Corden Slams Soccer Super League Plan: "It's the End of the Sport We Love"

The lack of communication from Liverpool’s owners was replicated by the owners and executives of the other ESL clubs and continued throughout the day, until Real Madrid president Florentino Pérez, the chairman of the ESL, gave an interview on late night Spanish television. In the interview, Perez admitted that his club was set to lose $481 million due to the pandemic and bizarrely claimed that the ESL would be the savior of European football rather than the end of it. “This Super League is not a competition for the rich, it’s a competition of solidarity to save football, by the great and the modest,” he said.

Perez also claimed that the agreements with founding teams that had signed up to the ESL were binding and that he was confident that, despite the outside pressure, not one of the clubs would backtrack and withdraw.

By the end of Tuesday, however, following yet more angry protests before Chelsea’s game against Brighton, more anger on social media, more condemnation from former pros and the media, and more threats of punishment from UEFA, the Premier League and the British government, the “Big Six” English clubs caved and began the process of withdrawing, leaving Agnelli’s Juventus and Perez’s Real Madrid with the embarrassing prospect of being the last two teams remaining in the ESL.

Watching the ESL crumble is breathtaking and I couldn’t be happier. But let’s remember why we came together. A group of billionaires who couldn’t care less about the you, me or our communities. This isn’t just football. This greed exists everywhere.

“we joined the #superleague by mistake” pic.twitter.com/iWjEbtir8j

La Liga will be playing this video during all their match broadcasts this weekend. The strap line: Earn It On The Pitch pic.twitter.com/PGWBijMbfG

"Now, where I come from you don't become super just by calling yourself the 'Super League.' No sir. Super is earned. Except for Superman — I guess he was sorta super from the jump wasn't he." – Ted Lasso, Season 3 pic.twitter.com/XKBDZz5lh0