It’s the question at the heart of virtually every single one of Westworld’s many mysteries, from the moment his name first appeared on the lips of a glitching host back in the premiere. Since then, we’ve learned that Arnold co-founded the park alongside Robert Ford (Anthony Hopkins), pioneered most of the technology, passionately believed in his creations achieving sentience, and eventually died under unknown circumstances, with his name and contribution to Westworld erased from the history books. Despite all this, Arnold remains a “prolific programmer for a dead guy,” according to the very possibly late Elsie Hughes (Shannon Woodward). Even after his death, Arnold’s codes and wisdom remain ever-present, guiding hosts like Dolores (Evan Rachel Wood) and Maeve (Thandie Newton) through their awakenings.

Despite his massive role in the mythology, Arnold was more of a ghost in the machine than an actual character on the show … until Sunday’s penultimate episode of season one, “The Well-Tempered Clavier,” which finally unmasked the legendary scientist. As it turns out, we have been looking at Arnold all along — in the form of Bernard (Jeffrey Wright), Ford’s second-in-command, a secret host built by Ford in Arnold’s image. And yes, it’s true that Arnold isn’t alive anymore — because Dolores killed him once upon a time.

Bernard reaches these conclusions thanks to a spirit quest of sorts, guided by Ford through a grueling mental journey. And just as he arrives at the answers, Bernard finds himself on the wrong side of a gun, forced to commit suicide at Ford’s behest. That’s one way out of a rabbit hole.

Here’s how the rest of the episode played out: 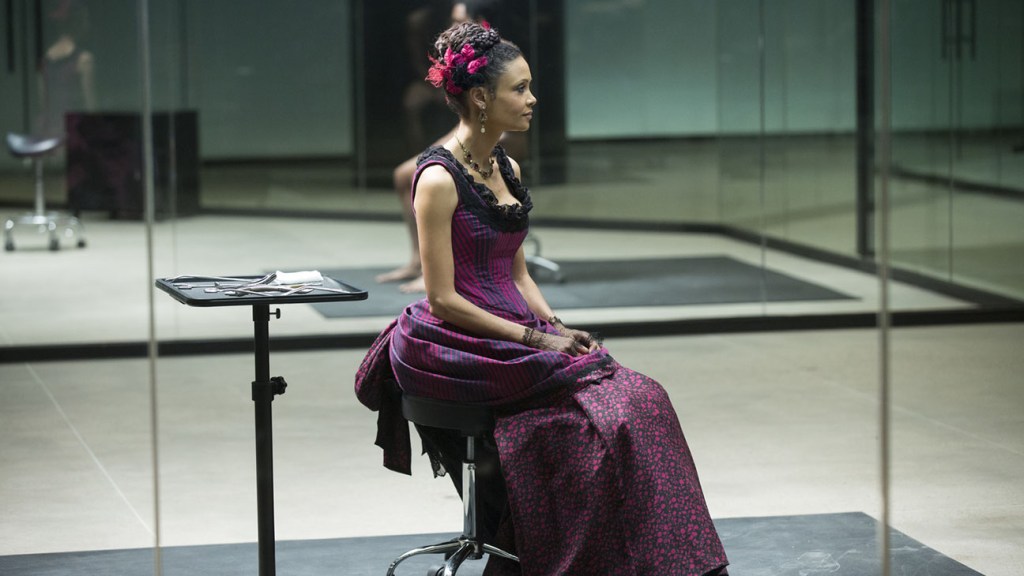 To Hell and Back

The episode begins with Maeve being brought back online by Bernard and asked to account for killing the new Clementine back in Sweetwater. Bernard notices Maeve’s recent upgrades, but before he can report in, Maeve stops him in his tracks, able to control his motor functions thanks to her new ability to rewire hosts on the fly.

“It’s a difficult thing, realizing your entire life is a hideous fiction,” she tells Bernard, frozen in place, aware now of his true nature. She forces Bernard to give her the all-clear to return to the park, and also advises him to keep searching for answers: “If you go looking for the truth, go looking for the whole thing. It’s like a good f—: half is worse than none at all.”

Maeve takes her own advice and returns to the park, where she meets up with bandit Hector Escaton (Rodrigo Santoro) and convinces him to join her in a quest to “hell.” The two have sex as Hector’s camp burns all around them, a fiery metaphor for their upcoming descent into darkness in the finale.

Ash Versus the Ghost Nation

Back at the Mesa, Ashley Stubbs (Luke Hemsworth) finally receives an update on Elsie, last seen on the show getting grabbed in Theresa’s (Sidse Babett Knudsen) hideaway. While all evidence currently points to Bernard killing Elsie, Stubbs discovers a signal for Elsie in a remote section of the park.

When Stubbs goes to investigate, he’s surprised to find he’s unable to communicate outside of the park. He’s even more surprised when members of the Ghost Nation tribe approach with weapons in hand, and he’s unable to control their functions. They quickly overpower him, leaving his fate unknown.

Elsewhere in the park, Teddy (James Marsden) wakes up after being knocked unconscious by Angela (Talulah Riley), the host who welcomed William (Jimmi Simpson) to Westworld back in episode two and showed her true colors as a Wyatt loyalist last week. She compels Teddy to remember more about shooting up Escalante alongside the wicked Wyatt, an act that’s even darker than he initially realized.

Thinking it through more, Teddy remembers his “past” again. This time, the Union uniforms disappear and give way to their true nature: innocent bystander hosts, including Angela, gunned down in cold blood by Teddy thanks to his inability to turn against Wyatt.

“I couldn’t resist,” he remembers with tears in his eyes. “It was like the devil himself had taken control of me.”

Teddy can’t remember any more than that, and Angela tells him that he’ll have better luck in another life. With that, she stabs him in the heart, and Teddy dies once again.

The next morning, the Man in Black (Ed Harris) wakes up and finds that Angela and the Wyatt loyalists are gone. After he gets himself out of a convoluted horse trap that would make Rube Goldberg proud, the Man encounters another entity: Charlotte Hale (Tessa Thompson), who has traveled all the way to the Man’s current location to update him on Theresa’s death and the board’s quest to oust Ford.

As it turns out, the Man isn’t just any titan of industry and philanthropist. He’s a member of the board behind Westworld, too. Charlotte credits the Man as the person who has kept Ford in business for all of these years, but he has no time for the board’s games — he’s already off for the next step toward the maze. In overhearing Angela and Teddy’s conversation, the Man knows where he needs to go next: “a city swallowed by sand,” a place he’s been to before. Hmm …

Turning to a storyline that may or may not have deep ties to the Man in Black, we see the fallout of Logan (Ben Barnes) capturing William and Dolores at the end of last week’s hour. He’s now in charge of the Confederales, and he plans to teach William a lesson he’ll never forget.

Logan sets out on his mission to bring William back to reality by pushing his future brother-in-law’s most sensitive button. He stabs Dolores in the stomach and peels back her flesh to reveal her inside circuitry, as a means of convincing William that she’s nothing more than a machine. Dolores runs off into the night, and Logan’s men aren’t able to find her. William finally relents, agreeing with Logan that he’s become way too invested in Westworld’s sprawling narratives. They hug and make up over a few bottles of alcohol. All the soldiers get drunk, everyone passes out, William and Logan wake up the next day and leave the park as best friends forever.

Oh, just kidding about that last part. When Logan wakes up with a terrible hangover, he sees all of his Confederale subordinates have been butchered by none other than William. With Logan’s knife in hand, William tells his friend that they are going to search for Dolores, and William’s way will be followed all the way, to the letter.

Also, did you happen to notice the picture of William’s fiancee? It’s the same photo buried in the dirt that drove Peter Abernathy (Louis Herthum) insane back in the premiere. Double hmm … 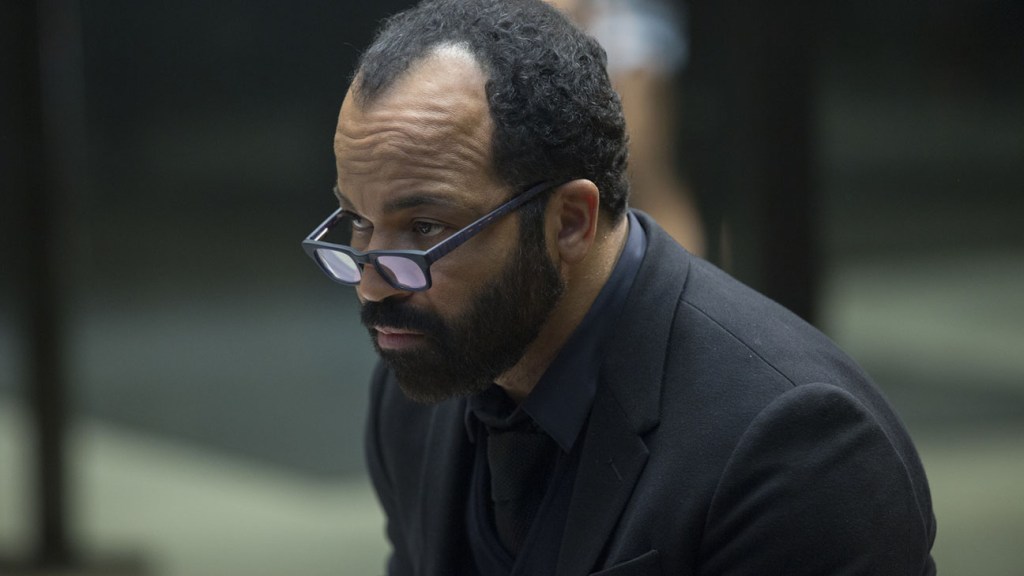 A City Swallowed by Sand

Dolores, urged by a voice to “remember,” stumbles through the woods, reeling from Logan’s assault. Suddenly, the wound is gone, as if Dolores has snapped from one time to another. She then returns to the “city swallowed by sand,” and once again hops through a couple of different experiences of the place: one in which it’s populated by fellow hosts, and one where it’s empty and ruined.

In both experiences, Dolores enters the church that’s been at the center of her visions. She steps inside the church’s confession booth, which doubles as an elevator to an underground laboratory. There, she sees a ravaged version of the facility filled with dead scientists, as well as a version where a young Robert Ford storms off in search of his partner Arnold. Dolores follows Ford into an office. (By the way, the name on the door? Arnold Weber — an anagram for Bernard Lowe.)

Once she reaches the bottom of the facility, Dolores finds herself face to face with her maker: Arnold, a man we have seen many times before in the form of Bernard. She begs Arnold for his help, but he says there’s nothing he can do, and she should know why. Suddenly, Dolores remembers: “You’re dead. You’re just a memory. I killed you.”

When Dolores emerges from the booth, she’s face to face with another key figure from her past: the Man in Black. At last, it appears that both Dolores and the Man are at the center of the maze, inches away from the answers they seek.

Finally, we come back to Bernard, who arrives at the same conclusion as Dolores, thanks to making Ford guide him through his past. Ford isn’t exactly the most willing participant; Bernard has a lobotomized Clementine (Angela Sarafyan) hold Ford at gunpoint, forcing the old man to help the host learn his true nature.

After Bernard learns that he was built by Ford and based on Arnold, he decides that it’s his responsibility to continue Arnold’s work. In the spirit of that, he tells Clementine to kill Ford. But Clementine doesn’t listen. Ford once again has the upper hand, using a back door into Clementine that’s been programmed into all of the hosts — ironically enough, a trick designed by Arnold.

Apparently, Ford and Bernard have been down this exact path before, and each time, Ford rolls Bernard back to the way things were. Not this time. This time, Ford orders Bernard to shoot himself in the head, so that Ford can resume his work on the “new narrative” without interruption.

“I’ve told you, Bernard: Never place your trust in us,” Ford says as he leaves the room. “We’re only human. Inevitably, we will disappoint you. Goodbye, my friend.”

With that, Ford exits the room, Bernard shoots himself in the head, the episode cuts to credits, and Westworld viewers begin the agonizing weeklong wait for the final episode of the season.