Continue to The Hollywood Reporter SKIP AD
You will be redirected back to your article in seconds
Skip to main content
August 18, 2017 7:15am

Westworld creators Lisa Joy and Jonathan Nolan faced quite the task in the final minutes of their convoluted HBO drama’s first season. In the season finale, “The Bicameral Mind,” they had to weave together different storylines in the sci-fi Western, give the various key characters — played by Anthony Hopkins, Evan Rachel Wood, Jeffrey Wright and Ed Harris — their due, and set up the forthcoming second season.

The husband-and-wife pair accomplished it all, and even have an Emmy nomination for their writing to show for it. Ahead of the September ceremony, Nolan and Joy annotated the final two pages of the script for The Hollywood Reporter, revealing new details about how the last minutes played out behind the screen, the most challenging scenes to pull off and why the final nights of production were “bittersweet.”

(1) “We love this image of Ed Harris on the outskirts of the party,” Nolan and Joy said via email. “He’s expressing the character’s fear and frustration that Ford [Anthony Hopkins] would never relinquish control of his game and that the rules would never change.”

(2) “Trish Summerville had designed Dolores’ [Evan Rachel Wood] blue dress for the pilot. Dolores had shifted into pants midway through the season. Here we wanted her to reclaim her look and flip it on its head. If she started as a princess, here we wanted her to take on the visual power of ‘Liberty leading the people.'”

(3) “The park service [where we shot] was thrilled when we showed up with 50 naked background performers and 50 dressed up in bones and bits of skin.”

(4) “When we were looking for Dolores, we knew where the character was headed.” Nolan and Joy say they were confident about Wood playing Dolores’ murderous alter ego, who emerges later in the season. “How she would play this sweet rancher’s daughter was more of an unknown. We were blown away. Turns out she can do anything.” 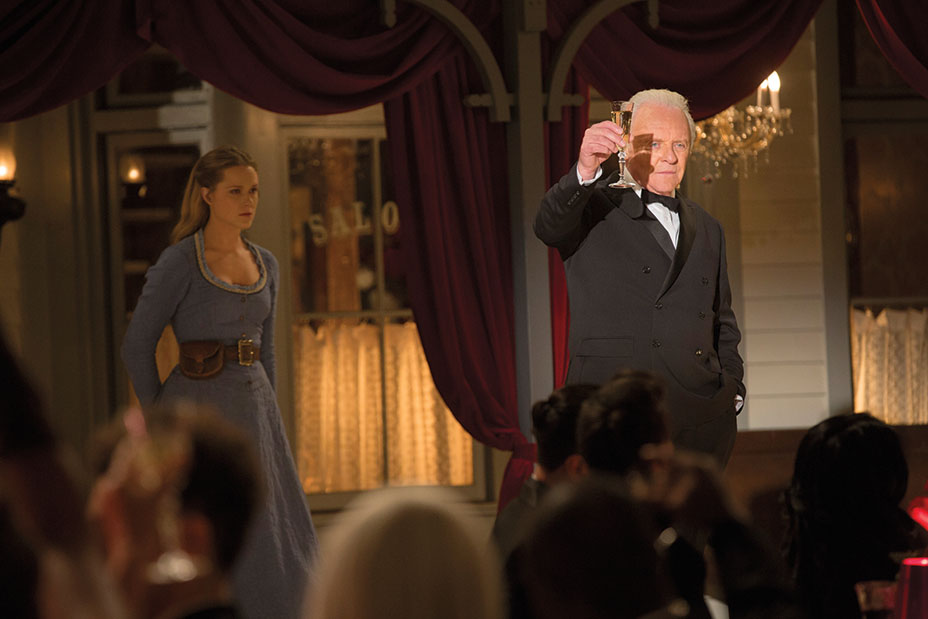 (5) “We knew Teddy’s [James Marsden] flashbacks would play in multiple episodes, so in the spirit of collaboration, we involved all of the directors. This culminated in having no fewer than five behind the camera. For one take, Stephen Williams yelled action, and Michelle MacLaren yelled cut.”

(6) “Turns out consciousness is a fairly complicated subject. We went down a rabbit hole with the works of Daniel Dennett, Marvin Minsky, Julian Jaynes and Douglas Hofstadter as our guides. This quote is our mangling of Hofstadter’s beautiful ideas about consciousness.”

(7) “These final nights of production were bittersweet, shooting Sir Anthony Hopkins in both senses of the word. It was an incredible experience working with one of the greatest actors of our time. We found a way to go out in style: a black-tie setting, a nice glass of champagne and Evan Rachel Wood with a revolver.”