[This story contains spoilers from Devs.]

“Free will isn’t free.” It’s the tagline that followed HBO’s Westworld throughout its third season, a provocative statement that comes with an equally pointed answer in the finale: “Free will does exist … it’s just fucking hard.”

Weeks before Jonathan Nolan and Lisa Joy’s genre-blending series wrapped its third trip around the sun, a very different science fiction series ended its own run, weighing in on the free will debate: FX on Hulu’s Devs, from Ex Machina and Annihilation filmmaker Alex Garland. The eight-episode limited series, which wrapped April 16, centered on a young programmer named Lily Chan (Sonoya Mizuno) caught in the midst of a great debate about fate. Are we the authors of our destiny, or are our future actions already determined before we even dream of making them? The titular Devs program, helmed by Nick Offerman’s Forest, makes a strong case for humans existing on “tram lines,” all on paths from which they cannot deviate.

Not without tremendous difficulty, at least.

Created as a self-contained miniseries, Devs is over, an ideas-rich slice of television waiting for newcomers to consume it as voraciously as a good novel. For those who missed it on the weekly release, Devs offers a twisting and turning narrative, often a slow-motion horror show, with unflinchingly honest depictions of violence and horror — but also big ideas, the kinds of philosophical debates often broached by the likes of Westworld and other similar series. Very different in tone and presentation, Devs all the same fills the void for those who want more televised science-fiction existentialism, not to mention scratches an itch for fans of Garland’s films — particularly Ex Machina, which is very much spiritually linked to Devs, in Garland’s own words.

For anyone who has already finished Devs and is seeking further elaboration from Garland, look no further. Ahead, The Hollywood Reporter speaks with the filmmaker about crafting the miniseries’ haunting finale, the final twists contained within the hour, his ultimate take on whether or not humans have free will and much more. For anyone who has not yet finished Devs: Stop now before proceeding any further. Major spoilers from the entire series lie just beyond the great expanse of Offerman below. Finish the series, then circle back. Consider yourself warned — even though you were always going to read what comes next anyway, of course. 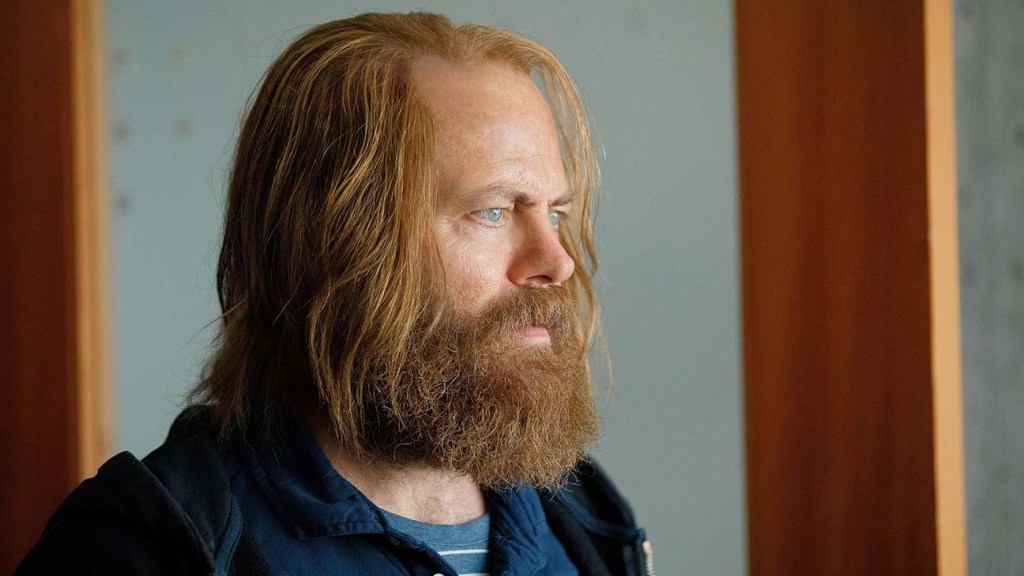 The finale features Lily and Forest in the belly of Devs. Forest and Katie (Alison Pill) have foreseen this moment where Lily kills Forest and the machine can no longer see what’s next. Lily ultimately defies this fate. Were these beats baked into your initial premise for the series?

Absolutely. Totally. I quite often start with the end of a story, and I’m figuring out how to get there. That was particularly true of Annihilation. In this case, because the story contains structured arguments, it wasn’t exactly like coming up with the ending and then working toward it. It was more about thinking, well, what is the argument? The end of the argument would always be the end of the story.

And the final choice Lily makes — to throw the gun away, despite seeing herself shoot Forest? It flies in the face of determinism, as she makes what’s considered the first true choice of free will.

It had two component parts. The first was if we were to live in a deterministic universe, the only way you might be able to have free will, or do something that involves free will. The only way it could happen is if you had foreknowledge of the thing you’re about to do. Under those circumstances, you could make the choice not to do it. You could also say that the choice you’ve made then instantly becomes a predetermined choice, or is determined based on the person you are. So, it’s slightly complex. Nonetheless, you would be on one nondiverging path, unless you were shown something that was about to happen. The show attempts to show that process on both sides, in a funny way. You’re seeing something that’s going to happen, making the choice not to do it, and then in a way folding back into a deterministic state, arguably.

The more important part of it was this other bit, having to do with our relationship with faith. I would often tend to see Forest and Katie as priests. One was a priest with doubts. One was a priest with total conviction. The priest with total conviction would persuade the priest with doubts to not doubt, to adhere to the scripture. What you had was two people who were the only two people in the world who were being shown examples of what was about to happen, but were then not [doing anything about it]. They refused to test themselves or test their theory, thinking it would be in opposition to the theory. It’s a theological debate within the series … rather, it’s a debate about theology.

With the finale, you take on a very difficult task: showing both Lily and the viewer exactly what Forest and Katie have seen Lily do, and then proceeding to move into that exact sequence. Obviously the outcome changes a bit, but the tension then becomes: Are we about to see the exact same scene we just saw again? It’s a difficult eye of the needle to thread. How did you navigate it?

We discussed that sequence a lot. Do we give the projection of the scene a very different look in the color correction? Do we make it super desaturated, or something that makes it very clearly not of the rest of the imagery? Would it be confusing? How do we avoid it being confusing? Do we shoot it through exactly the same camera angles in each version? If we vary the camera angles, how do we vary them? It was mainly surrounded by technical questions. In that respect, it’s actually really typical filmmaking. You have a bunch of creative things that become a conversation about craft very quickly. It’s craft that gets you through the forest.

'Devs': How Alex Garland's Chilling Thriller Series Serves as an Argument for Compassion

From a story perspective, the finale culminates in this moment where Forest believes he’s reached the end of his life, and Lily (who has just watched her ex-boyfriend die, only a short time after watching her more recent boyfriend die) has arrived at Devs with the belief she’s about to be involved in something potentially apocalyptic …

They’re both in a version of a Zen state. Lily’s Zen state was one of despair, but Forest’s Zen state is one of elation, and lost in a kind of fugue of those conditions. We respond to big things, which is often with a kind of passivity. The characters in stories are very rarely supposed to be resigned to their fate, whether it’s an up version or a down version. And that’s very difficult for actors. It’s quite a difficult thing to portray.

As they sit together, Forest reveals the inside joke about Devs: the v is actually a u. It’s the god in the machine.

It’s actually a riff on Ex Machina, in a way. The full phrase being “Deus ex Machina.” I saw these two as companion pieces to each other. In one, you have a man who acts as if he’s god and creates something. In the other version, you have humans who create a god. One is man acting as a god and the other is the constructing of a god. It felt like twin states of what technology is making possible. At the same time, it’s exactly what Forest says it was: It’s not delivered with fanfare and trumpets. He says it’s just a private joke. And that’s what it kind of is. It’s a private joke for people who watched Ex Machina and can see the ways in which the two are connected.

The “joke” is reflected in the final title card of the series, which reads, “Deus.”

It is. It’s an acknowledgement that this is what these people were doing all along. When I talk about “the argument,” one of the arguments is: What is it to be all-knowing and all-powerful? What are some of the complications of that, particularly where it comes to how we judge our actions and the way we might get judged or punished for our actions? It becomes open to debate, if there was a system that already knew what our actions were going to be. It would seem unfair to punish us for things that were inevitable.

After Forest and Lily die, we go into the screen, into this other realm where Forest reunites with his daughter. We’re left to question the nature of their reality and their continued existence. What did you want to leave us with, as far as Lily and Forest’s new lives — not to mention the question about how is Katie going to keep the lights on with the project?

Well, it’s the same as the situation we’re in. We’re going to need to keep the lights on if we’re going to come out of this. We have existential threats that involve a decision, whether it’s a deterministic one or not, about whether we can keep the lights on or not. As well as that, it’s about making a separate set of points. It’s a development of what Forest says to Lily: “Life is just something we watch unfold, like pictures on a screen.” In effect, this is a kind of ultimate playing out of being pictures on a screen. In those terms, the life Lily and Forest and everybody else has within the simulated world in the machine is indistinguishable from our world. Unless you happen to know you’re in the machine, there would be no difference between our world and the simulated world. The fact that you could theoretically simulate the world and it would not seem like a simulated world is its own proof of the deterministic nature of our world and universe.