[This story contains spoilers for season two, episode four of HBO’s Westworld, “Riddle of the Sphinx.”]

Can one good deed compensate for a lifetime of violent mistakes?

That’s the question currently in play on Westworld, especially in the latest hour of the series, “Riddle of the Sphinx,” directed by series co-creator Lisa Joy. In the episode, the Man in Black (Ed Harris) rides into Las Mudas alongside Lawrence (Clifton Collins Jr.), and is quickly forced to relive his own history of violence by watching Major Craddock (Jonathan Tucker) and the Confederados butcher the members of the community — a dark echo of the Man in Black’s own actions, implemented in this very town in the very second episode of the entire series.

Watching Craddock torture innocent hosts, including Lawrence’s terrified wife, the gunslinger occasionally known as William quietly remembers his own spouse’s death. Galvanized by memories of what he’s lost along the way, the Man in Black turns the tables on Craddock and his men, in a quick burst of gunfire and improvised brutality. A broken liquor bottle becomes a knife, a killer becomes a shield, a bullet grazes the Man in Black’s neck, and still he persists. In the span of no more than a minute, the black-hatted gunslinger solidifies his status as one of the most dangerous men in the park, and showcases his potential as a surprising savior.

'Westworld': All the Details About Ford and the Man in Black's New Game (So Far)

It’s a dark scene, both in terms of content and lighting — but if it looked like it was a little bit fun, too? Well, that’s by design. In a Reddit AMA this week, Joy described the scene as one of her very favorites to film in the episode: “Ed Harris killing a bunch of motherfuckers in the rain is right up there.” Speaking with The Hollywood Reporter, Harris himself backs that claim.

“We really worked hard on the choreography of that: when the bullets were hitting and where,” he tells THR. “The whole sequence of it was worked very specifically in rehearsal. I remember how excited Lisa was directing the episode. I really liked working with her on it.”

“It was that much more in-depth for me,” he continues, weighing in on how working with Joy as a director compared to his relationship with her as writer and showrunner. “Any questions I had, she was there to answer. [Joy and co-creator Jonathan Nolan have] been living with these characters in their heads for a long time, in terms of their deeper motivations. It felt like we were penetrating the character deeper than we had at times.”

'Westworld' Answers a Shocking "Riddle" About the Series

Heading into season two, Harris knew the Man in Black was going to be getting his hands even dirtier than what was already a messy first season. “I knew I was going to have a lot more damage done to me this year,” he explains with a laugh. “I knew it would be a very physical year.” But the heightened stakes within the park extend beyond the level of violence, certainly in William’s case.

In season one, the Man in Black was searching for the center of the maze — a goal that he and we came to realize was never meant for him at all. In season two, the late Robert Ford (Anthony Hopkins) has laid out a game deliberately designed for William: the search for “the door,” an as-yet undefined location or objective. Whatever it is, it coincides with something the Man in Black has described as his “greatest mistake,” one he very much intends to correct.

“He has this whole other agenda,” Harris says about the Man in Black’s season two adventure. “He’s realizing there’s something going on in the park that he’s not entirely surprised by, but something has taken place that he finds particularly wrong and offensive. He’s out to do something about it. He has a very specific goal in mind.” 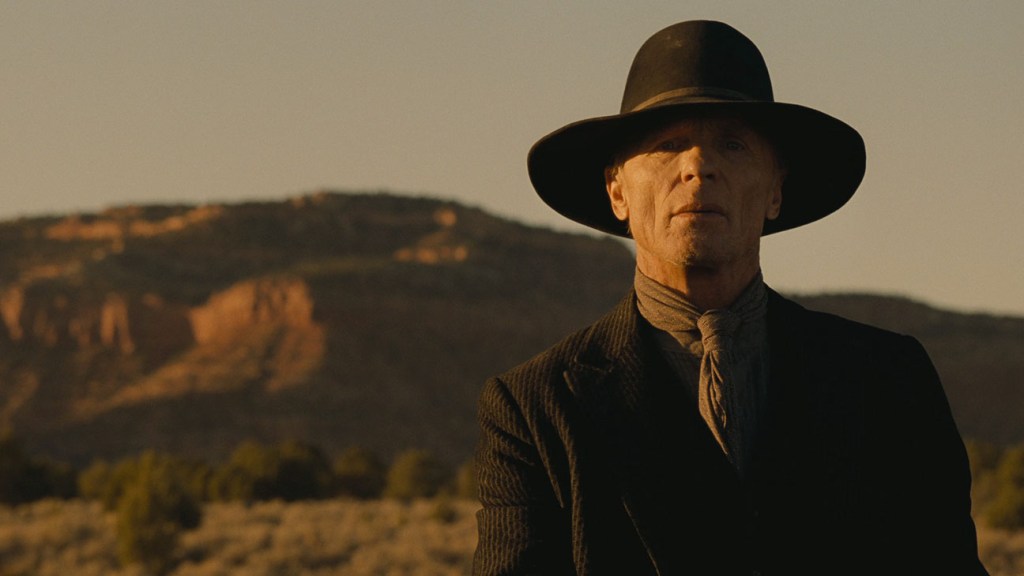 Aspects of the goal came into focus in “Riddle of the Sphinx,” far away from the shoot-out in Las Mudas. In flashback scenes, it’s revealed that William has spent decades trying to master a form of immortality, merging human consciousness with host technology. His father-in-law, James Delos (Peter Mullan), is the test subject — and after 149 attempts across countless years, the Man in Black finally decides to pull the plug.

“Peter was great,” Harris remembers of playing the climactic scene between the Man in Black and the veritable ghost of his father-in-law. “He’s a very strong actor and very committed and very intense. It was fun playing with him. As a character going up against the Man in Black, he was appropriately intimidating.”

For his part, Harris acknowledges “a certain resignation” to the Man in Black in his final encounter with the mechanical Delos, but adds, “There’s still a determination within him. It’s kind of like [he’s on] the last voyage. I’m not sure how else to describe it.”

'Westworld': How the Shocking Robot Reveal Could Impact the Future

Indeed, there’s a quality about the Man in Black that invokes the idea of a cowboy heading out on one final ride — “the last voyage,” as Harris puts it. In the first season, the Man in Black makes it clear that he’s “not going back,” that he intends to stay in the park for the long haul — a notion that suggests his commitment to a final mission, his own mortality be damned.

Of course, those are just guesses. For Harris’ part, the award-winning actor and director sounds unconcerned with the greater scope of the gunslinger’s story, at least in terms of his own process as a performer.

“It’s much more of a scene-to-scene thing for me,” he says about how he approaches the mythologically rich character. “I get the scripts in and look to see what’s taking place in each episode. It’s much more of a moment-to-moment focus in terms of what I’m doing as an actor. Yes, the overall story is in me, and the overall objectives. But moment to moment, in front of the camera, it’s really about trying to find the truth of the moment, in terms of the through line and what he’s carrying with him.”

In mining for the truth of the Man in Black’s many moments, Harris has emerged with a perspective that might seem surprising to viewers, given the character’s long list of sins measured against his good deeds.

“We were doing a Q&A after one of the screenings a couple of weeks ago,” says Harris. “The fellow who was moderating asked me, ‘Do you see the Man in Black as an antagonist or as a protagonist?’ And I said I see him as a protagonist. To me, he’s a good guy, particularly in this season, in terms of what he’s trying to do. I think his objectives are actually quite morally appropriate and sound.”

What’s next for the unlikely hero’s journey, as it were? For one thing, it involves Katja Herbers as Emily, the Man in Black’s daughter. On that front, Harris is tight-lipped. “We do quite a bit together,” is just about all he’ll offer. The future of that family reunion, much like the Man in Black’s current game, will play out in fuller detail as Westworld continues the voyage through its second season.

What are your thoughts on Harris’ work as the Man in Black in season two? Do you see him as a hero or as a villain? Sound off in the comments and keep checking THR.com/Westworld for more coverage.

'Westworld': All the Details About Ford and the Man in Black's New Game (So Far)