[Warning: This story contains spoilers for the second episode of HBO’s Westworld.]

Westworld narrative director Lee Sizemore (Simon Quarterman) sheepishly asks this question of the park’s legendary robot designer Robert Ford (Anthony Hopkins), after Ford effectively eviscerates Sizemore’s plan for a new storyline. Ford’s response, as he stares at a nearby host’s feet: “What size are those boots?”

With any luck, viewers found more to chew on in the HBO drama’s second episode than a pair of shoes. The episode, called “Chestnut,” advanced several existing storylines, complicating the narrative for figures who did little more than lurk in the background during the series premiere. It also introduced some newcomers, quite literally in the case of one pair of guests, who arrive at the park boasting very different comfort levels about the high-concept fantasies at play in Westworld.

Here are 10 of the most important developments that occurred during “Chestnut”: 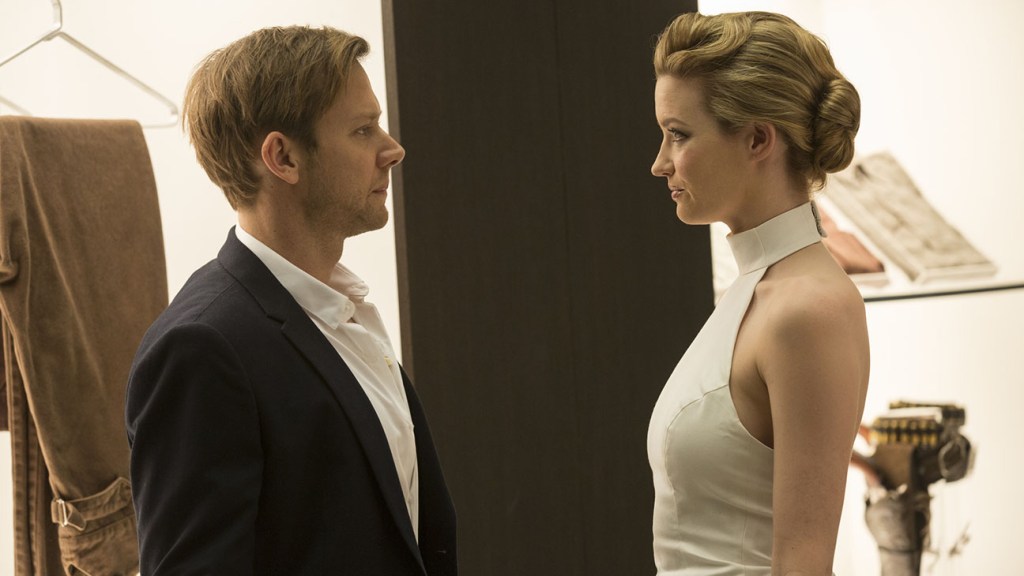 Meet William (Jimmi Simpson) and Logan (Ben Barnes), two human guests who travel to Westworld for very different reasons — effectively the show’s version of the Richard Benjamin and James Brolin characters of the original Westworld film. Little is known about their connection to each other, beyond the fact that they work together, and that they both have very different views of this new frontier. Logan, a Westworld veteran, caves into his hedonistic desires without any thought. William, meanwhile, is much more cautious, dipping into Westworld one toe at a time. It’s no coincidence that William and Logan wear a white hat and black hat, respectively.

The gunslinging Man in Black (Ed Harris) continues his quest to find the “deeper level” of Westworld, and his first stop on the list involves recruiting an old friend to his cause: Lawrence (Clifton Collins Jr.), someone the MiB has interacted with countless times across the years. Lawrence has no memory of the man, of course, but he does seem to know more about this place than meets the eye, based on his daughter’s clue to the MiB: “Follow the blood arroyo to the place where the snake lays its eggs.”

3. “That Gentleman Gets Whatever He Wants”

While the Man in Black searches for his own answers, questions continue to surround the character himself. Midway through the episode, he slaughters an entire town of hosts, even killing Lawrence’s wife in an attempt to get him talking about the “deeper level.” A concerned security operative views the incident from the monitor, but his boss Ashley Stubbs (Luke Hemsworth) quickly quiets the issues, saying, “That gentleman gets whatever he wants.” Clearly, the Man in Black’s 30 years of Westworld vacationing has given him a certain level of immunity … something sure to come in handy as he embarks on his mission and his new life in the park. When Lawrence tells the Man to go home, the gunslinger replies with a smile: “This time, I’m never going back.” 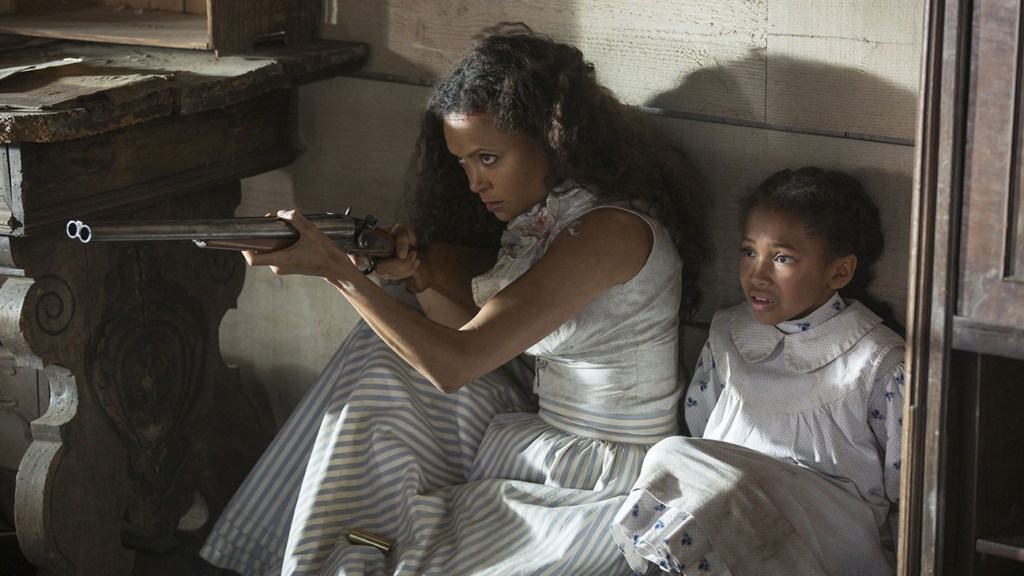 4. A Certain Shade of Maeve

The most harrowing moments of the hour belong to Maeve (Thandie Newton), the main madame at Sweetwater’s brothel. But was she always a madame? Maeve experiences recurring visions and nightmares of another life, where she and a little girl are assaulted by tribal warriors, and eventually cornered by the Man in Black. What’s more, Maeve wakes up in front of a pair of Westworld scientists during a surgical procedure, proceeding to catch a behind-the-scenes look at how the park’s sausage gets made. The doctors eventually subdue Maeve, and apparently decide to keep the incident a secret — a potentially fatal mistake if Maeve continues to become more aware of her own existence.

5. Dolores, Get Your Gun

Like Maeve, Evan Rachel Wood’s character continues toward self-discovery, breaking from her little loop in a small but meaningful way. Instead of sleeping through the night, she awakens and walks out into the darkness, as a voice in her head tells her to “remember.” Not far from her house, she digs into the dirt and uncovers a buried revolver. Considering that Dolores has already killed a fly, there’s no telling what the oldest host in Westworld will do now that she has a firearm.

In further Dolores developments, during one of her routine visits to Sweetwater, she meets someone new: William. The newcomer is already struggling with the morality of Westworld, but finally seems drawn into the world when he picks up Dolores’ fallen can of food and hands it to her. While Dolores and Teddy (James Marsden) believe themselves to be fated for one another, is it possible that William will play a greater role in Dolores’ destiny?

Scientist Bernard Lowe (Jeffrey Wright) is keeping a few things to himself. For one, it turns out that he has a secret relationship with Theresa Cullen (Sidse Babett Knudsen), Westworld’s stone-cold operations director. This gives Lowe a direct if complicated line to one of the park’s biggest power players. But perhaps even more complex is Bernard’s relationship with Dolores. The episode reveals that he’s aware of Dolores’ increasing “glitches,” and wants to see how they play out — without anyone else knowing, at least for now. Is this a benevolent scientific curiosity, or is there something more menacing behind Bernard’s interest in Dolores? 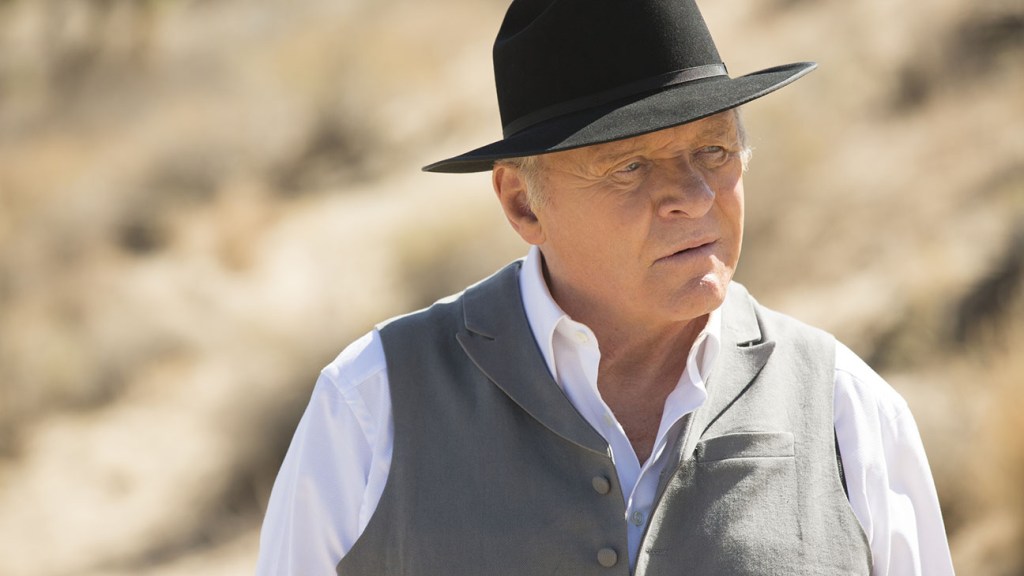 At the end of the episode, in the aforementioned scene with Sizemore, Ford completely shuts down the narrative director’s plans for a massive new storyline called “Odyssey on Red River.” It turns out, Ford has an idea for a new narrative of his own. The details are sketchy, but it involves a spot of land that perhaps once housed a town, or will soon house a town, and currently only hosts a dark tower. Ford tells Bernard: “It’s something I’ve been working on for quite some time … something quite original.”

Before revealing the location of his new story to Bernard, Ford sets out on an adventure of his own, wandering the vast expanse of Westworld with only a young child as company. The boy says he’s vacationing with his parents, and feels bored. The boredom dies when Ford shows up, revealing his ability to stop snakes from moving with nothing more than a wave of his hand. Then, the other shoe drops: Ford has the exact same control over the boy, signaling that he is a host. But is this boy more than an ordinary host? Is it possible that he holds a deeper connection to Ford — that he’s a replication of his son, or even a replication of Ford himself as a child? This is the kind of paranoia a show like Westworld is bound to stir in its viewers.

10. No Alarms and No Surprises

Finally, the player piano strikes again. The premiere episode featured piano covers of Soundgarden’s “Black Hole Sun” and the Rolling Stones’ “Paint it Black,” and the second episode is no different, this time providing a cover of Radiohead’s “No Surprises” during Maeve’s struggles at the brothel. Here’s hoping series composer Ramin Djawadi (who also composes HBO’s Game of Thrones) releases a full album of his piano covers once the season ends.

What did you think of Westworld‘s second episode?