“I sound like the Cheshire Cat in Alice in Wonderland right now, but that’s how you have to speak about this show: in riddles!”

That’s what Evan Rachel Wood says, speaking with The Hollywood Reporter, doing her best to weigh in on a mystery she can’t unravel without invoking the wrath of the Westworld overlords, creators Jonathan Nolan and Lisa Joy. But one can certainly hear the Cheshire Cat smile on the other side of the line as she navigates the question at hand: the “question no one has ever even dreamed of asking,” according to what William (Jimmi Simpson) tells Dolores (Wood) near the end of season two’s second hour, “Reunion.”

“It shook me to my core,” says Wood, finally arriving at a satisfying answer, when asked about the final moments of the episode. In the scene, Dolores tells Teddy (James Marsden) that her memories are so vast, she remembers a secret “weapon” the budding Man in Black (played alternately by Simpson and Ed Harris) once showed her in a moment of hubris. Dolores reveals her intention to use this weapon — the apparent answer to the “question no one has ever even dreamed of asking” — as a way of bringing humanity to its knees.

“Your mind immediately goes to: ‘What kind of a weapon is it?'” she says, recalling her own process of trying to solve the riddle on set. “I tried to think of what it was. When you start asking deeper questions, you might realize you’re thinking about it the wrong way.”

As Dolores, Wood plays the role of the park’s first host. Likewise, in reality, Wood plays the role of the show’s first theorist, famously engaging her fellow castmembers throughout season one about the many twists and turns baked into Westworld. Wood’s theories didn’t stop in season two (“I’m the cast and crew’s personal Reddit on site,” she claims), but even she didn’t see one of the episode’s other major curveballs coming: Dolores has not only traveled outside of the park and into the real world in the past, she’s left the park on at least two different occasions.

“I literally threw down the script and went, ‘Of course! It’s so obvious!'” Wood tells THR about her reaction to learning Dolores traveled to “our world,” as Arnold (Jeffrey Wright) puts it. “That’s why I love the writing on this show. It makes so much sense, and your mind hadn’t even gone there. I thought it was brilliant. Originally, that reveal came at the end of the first episode. I was shocked, but also not surprised. The surprises never feel like they’re there just to be surprises. They actually make sense. That’s what gets me.” 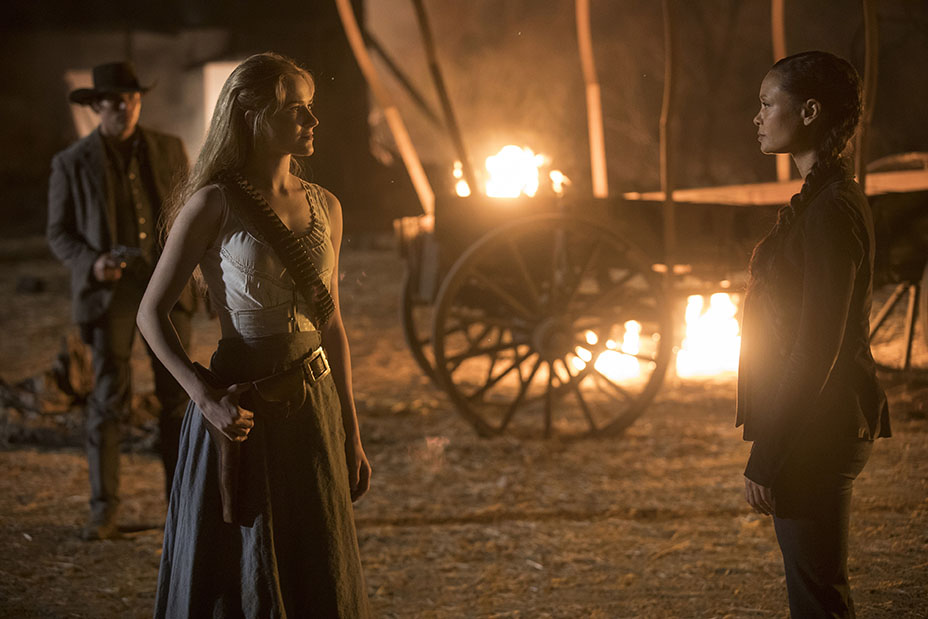 During her visits to the world outside of Westworld, Dolores is routinely taken aback by the “splendor,” and the city lights that look like stars strewn about the ground. It’s hard to imagine that same wide-eyed wonder existing within the contemporary Dolores, currently on a violent crusade against humanity, with nothing short of world domination on her mind. Does the Dolores who sees the splendor in mankind’s achievements still exist within the character, or has the war-minded Wyatt destroyed that side of her personality?

“She’s absolutely there — just in the same way Wyatt was somewhat active in Dolores in the first season, but not fully in control,” Wood says. “I think she’s in control of who she decides to be in what moment. For us, we filmed different versions of the same performance in multiple takes, in order to see how far we wanted to go with her on the character spectrum from Dolores to Wyatt. How much should she be Dolores? How much should she be Wyatt? It was a trial and error for us on set. We really got into a nice flow and found certain rules that we just started following for when and where she would be certain people. But I definitely think it’s still in her. We’re going to see it in the upcoming episodes, which is why I want to reassure people: the Dolores you know and love is definitely still there, but there’s another thing inside of her, too. If you miss that person or that side of her, you’ll definitely still have it. But there’s another side now, too.”

“It feels amazing playing a role like that,” she continues. “Women are like that, and people are like that. We’re lotus flowers. We’re a million different things. There’s a million sides to us. It’s very cool getting to play that multidimensionality.”

'Westworld': How That Big "Bad" Cameo Came to Life

The multidimensional host known as Maeve (Thandie Newton) crossed paths with Dolores this week as well, the first meeting between the top tier Westworld titans since their very first interaction in season one. In the scene, Dolores and Maeve are ships in the night, meeting each other under the starlit sky, as both parties journey into their respective nights. No punches or bullets are exchanged; only words and ideas, as it becomes clear that both hosts have different philosophies in mind as they continue their exploration of consciousness.

“It went exactly as I expected,” Wood says, weighing in on the highly anticipated reunion between Dolores and Maeve. “They’re both awake enough and smart enough to recognize in each other that they are equals. It’s why neither of them does anything. No one lashes out. I felt there was this caution, but also a mutual respect between the two, even though they have very different objectives. I think Dolores does respect Maeve very much. She also wants to warn her, and is scared for her. I don’t think they want to do each other any harm — at least to my knowledge. But I love that Dolores is killing people, and Maeve can do whatever she wants, but the second they’re faced off with each other? It’s just like, ‘OK, I can see you’re where I am, so let’s all be cool. We’re all just talking!’ I really liked how it was a tip-of-the-hat moment, and then they both went about the rest of their days. They’re on different missions.”

With that said, Wood mourns the fact that Dolores and Maeve couldn’t fully see eye to eye in their first scene of the season together: “Thandie and I were personally disappointed, because we really want to be teamed up and working together. But we may have to wait a little longer for that.”

Fans will certainly have to wait a good little while before learning the true nature of the “weapon” Dolores is currently seeking. For her part, Wood only offers this cryptic tease about how she reacted when she learned the answer to that question: “I’ll quote Doctor Ford in season one: ‘Like most great stories, it’s rooted in truth.’ It was very chilling. It shook me to my core.”

'Westworld' Teases Another Major "Reunion" Coming Next in Season 2

What are your predictions about the new Westworld mystery? Sound off in the comments below and keep checking THR.com/Westworld for more coverage.