[Warning: This story contains spoilers for the series premiere of HBO’s Westworld.]

As is the case with the Autobots and Decepticons, there’s more than meets the eye when it comes to the robot hosts at the heart of HBO’s Westworld … especially Dolores, the girl next door played by Evan Rachel Wood.

Dolores comes across innocently enough at first. She’s a devoted daughter, a spirited painter, someone who always sees the good in life even in the midst of chaos. But these aren’t necessarily her drives, so much as they are part of the programming instilled in her by Robert Ford (Anthony Hopkins) and the other scientists responsible for Westworld. What’s more, Dolores’ youthful visage hides a shocking truth: despite appearances, she’s actually the oldest host in Westworld.

“Holding in all of the secrets has been a bit unbearable,” Wood told The Hollywood Reporter about the premiere’s big reveal involving her character. “Dolores is essential [to the show’s mythology]. There are so many layers to her that we will slowly start to uncover. She’s never quite what you see.”

For their part, producers Jonathan and Lisa Joy Nolan wanted to explore the theme park at the heart of Westworld as an old attraction, not a new one, and Dolores was one of their first ways into that idea.

“We were fascinated by the idea that if you make a good game space, a good and durable environment like this, it would last for generations. People would come back and bring their kids to meet Dolores, the same way they met her when they were a kid,” Nolan said. “Dolores has been the girl next door with aspirations to travel and see the world and escape her modest little loop for going on 35 years. That, to us, enhances the horror of her situation.”

Indeed, “horror” is a good word for it. Over the course of the first episode alone, Dolores helplessly watches her loved ones die, and is even briefly captured by the mysterious Gunslinger (Ed Harris), dragged off-screen in a violent manner, the specific horrors left to the viewers’ imagination.

“It’s absolutely very rough,” Wood said about the show’s violent nature, evidenced at multiple occasions throughout the premiere. “I don’t like gratuitous violence against women at all, but I would wait for the context in which it’s being used. As the show progresses, the way it’s being used is very much a commentary and a look at our humanity and why we find these things entertaining and why this is an epidemic, and flipping it on its head. The roles for the women on this show are going to be very revolutionary. It’s very gender-neutral. I would ask, as somebody who is an advocate against any kind of abuse or violence and is outspoken about it, to give it a chance and wait to see where it’s going. I think it will surprise people.”

It’s already surprising, given the many deaths and rebirths seen throughout the first episode of Westworld. For instance, there’s James Marsden’s character, Teddy, a good-hearted and handsome host who shares a romance with Dolores. Teddy dies twice in the premiere: once at the hands of the Gunslinger, and later at the hands of Hector Escaton (Rodrigo Santoro) and his gang.

“As far as core codes go, they are bound together in a way,” Wood says of Dolores and Teddy’s shared connection, programming notwithstanding. “I would guess they always will be, in some capacity. Whatever form that takes.” 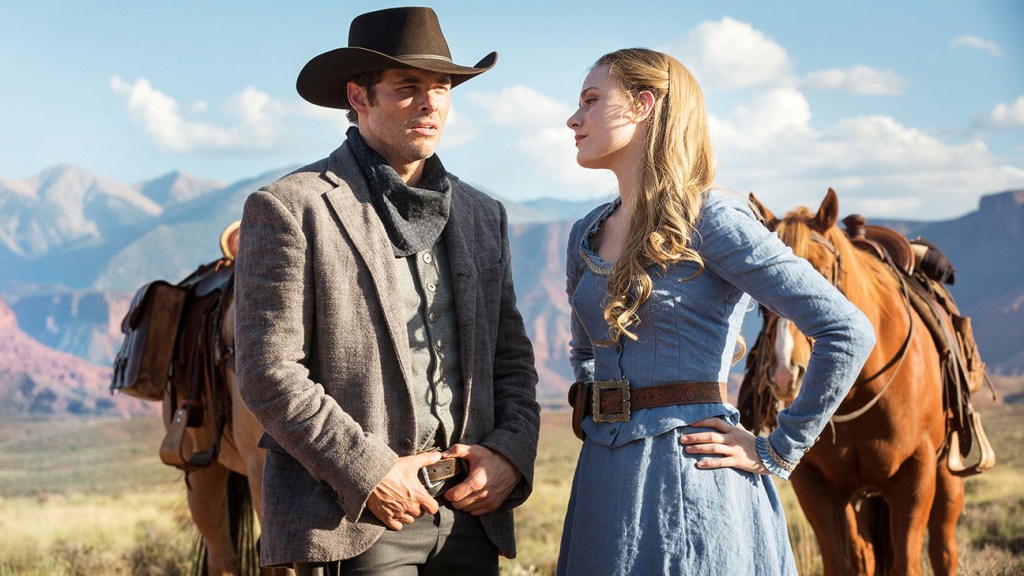 It’s impossible to predict the future of Westworld after only one episode, but there is nevertheless a predictable nature to the park’s inhabitants. The hosts are programmed to stay within their loops, rinsing and repeating the same exact routines day in and day out. For example, Dolores’ loop involves waking up, exchanging pleasantries with her father (even if the host playing her father might change from day to day), heading into Sweetwater, painting in the countryside, then coming home to witness her family’s evisceration at the hands of murderous outlaws.

“It’s really a trip, doing the same scene over and over again, with slight variations,” Wood said of the circular nature of the show’s characters. “It’s a wonderful set-up getting to know these characters’ loops and where they’re supposed to be so that you really notice when they’re not. That’s when things start going haywire.”

Wood stresses that the repetition adds further thematic value to the story: “I think it’s about how we would look to an objective source, like a robot. We would be buffoons. We would be violent, kind of horrible creatures. If they were modeled after humans and did become fully conscious, they would have to ask if they would continue to be like us, or if they would revolt and want to destroy us? It would be in their hands. We’re not setting up a very good example right now.”

Who knows if Dolores and the other Westworld locals will one day rebel and destroy their makers. (In that regard, Nolan makes it clear: “The original film was most notable for the premise that you can build a place like this, but it won’t end well. You have one or two of these characters making that observation over the course of the first four episodes. That was not part of the original narrative that we wanted to abandon. This definitely won’t go well for the guests sooner or later.”) But at the very least, Dolores has already destroyed one life form: a fly. While it’s nothing more than a tiny little life, it’s still a life, and the hosts are programmed to never harm living creatures. What does this mean for the character and for Westworld at large, then, that Dolores has already killed by the end of the series premiere?

What did you think of Westworld? Sound off in the comments below.