[Warning: This story contains spoilers for the fifth episode of HBO’s Westworld.]

Don’t let the costume change fool you: Dolores (Evan Rachel Wood), the oldest host in Westworld, may have ditched her Alice in Wonderland esthetic for now, but she’s further down the rabbit hole than ever before.

In the fifth episode of the new HBO science-fiction series, called “Contrapasso,” Dolores follows the road toward self-discovery all the way to a gunfight. Dressed like a gunslinger after participating in a heist earlier in the day, Dolores calmly and efficiently kills a group of mercenary hosts before they can lay a hand on William (Jimmi Simpson), her traveling companion and, as of this week’s emotionally charged kiss, potential love interest. As a means of explanation, Dolores tells William in the aftermath of the showdown: “You said people come here to change the stories of their lives? I imagined a story where I didn’t have to be the damsel.”

Dolores’ drastic measures come after an episode already loaded with forward momentum for the character. She arrives in a new town called Pariah, which is populated by murderers, thieves and other assorted outlaws. There, she begins seeing visions of another Dolores weaving in and out of crowds, offering cryptic pieces of wisdom. Are these images nothing more than glitches in Dolores’ programming, or is the answer even more unsettling — that there’s more than one Dolores?

Speaking with THR about the episode, Wood is the one who posits the possibility of “multiple Dolores’,” among other theories. Read on for the Westworld star’s thoughts on her character’s evolution, her first scene opposite Anthony Hopkins as Dr. Robert Ford, the kiss between Dolores and William, Dolores’ newfound proficiency as a gunslinger and what it was like to film the scenes set during Pariah’s vivid sex party.

Episode five is a big one for Dolores, starting with her arrival in Pariah. What does she make of the town?

I think what we’re starting to notice, especially in this episode, is she is improvising. She’s really breaking code. She’s speaking in a less damsel, Disney princess-type of way, and more like a philosophical stoner. (Laughs.) She’s suddenly asking different questions about her reality, and she’s also making sense of it very quickly, and in an evolved way. Like, when she sees Pariah, she doesn’t freak out; she says, “It’s beautiful in its own way.” Because it’s almost what the world looks like when it’s not pretending. It’s just an honest world. She’s also obviously starting to hear things that she would normally be programmed not to …

And seeing things, as well.

Yes. She’s seeing things and talking to the voice, which is getting louder and stronger. I think she’s scared about what’s happening, but she’s compelled to see where this is going to take her. And we also saw Dolores and Robert Ford (Anthony Hopkins) have a scene together for the very first time this season.

What are some of your memories of shooting those scenes?

It was breathtaking. Because obviously I was so excited to know what it’s like to do a scene with Anthony Hopkins. But it wasn’t just a scene. It was an empty glass box, and I sat on a stool, naked, and Anthony Hopkins was five inches away from my face. It was such an intense scene, and especially for Ford. I feel like it’s the first time we’ve really seen him vulnerable and scared, without all the answers. There’s 30 years of history between him and Dolores that we still don’t quite understand, and I’m still trying to figure out exactly what’s going on in that scene, and who they are to one another, and why he’s so scared.

The scene ends on a great note, as Dolores asks Ford: “Are we friends?” And he very chillingly replies, “I wouldn’t say that at all.” So what are they?

It could mean so many things. They could be enemies, or not. When Anthony and I did that scene, he did every single take differently. I thought I might be able to get clues from his performance, and then it changed every time. So I was like, “Aw, man! It could be anything!” He blew me away with his acting. Of course, we all know Anthony Hopkins is one of the greatest performers of our time, but seeing him in person and seeing those subtleties and seeing them change every take was just like watching Da Vinci paint. It reminded me why I love what I do. It was unbelievable. I even forgot I was naked! It was that good! 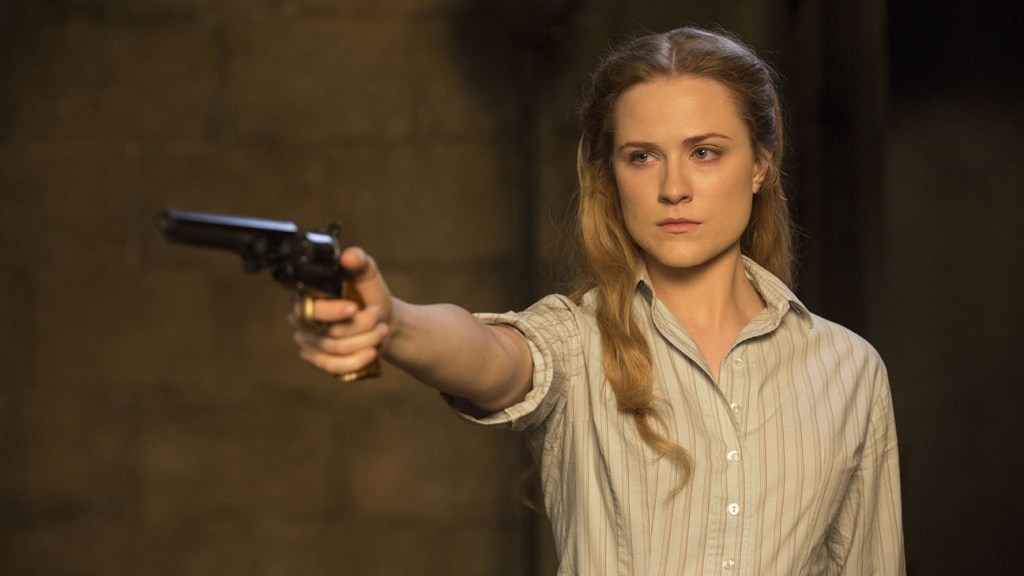 Dolores and William grow closer in this episode. What was your interpretation of their kiss?

I think Dolores has genuinely fallen in love with somebody other than Teddy (James Marsden), and that’s … she’s bound to Teddy no matter what, so for her to connect with William on that level, and kiss him in that way, and to say those things, it means it’s real. But what happens if a bird and a fish fall in love? It’s almost already on a path to tragedy, but there’s also something maybe beautiful about it, because this A.I. is experiencing this for the first time and it’s her choice. And also we see Dolores switch into a mode we’ve never seen before, and shoots — with incredible speed and precision. She’s starting to show signs of something, a different side to Dolores that she doesn’t even quite understand yet. She’s evolving.

Dolores’ evolution is reflected further in her costume change in this episode, as she suits up for the wagon heist. It’s almost like she’s playing as a new avatar. Does the costume change signal a shift for the character?

I think it definitely does. I think the farther out you take Dolores from Sweetwater, obviously the more she’s not on her loop, and then the more she would probably be improvising and creating her own reality — which is all just my theories, of course. (Laughs.) I think absolutely that signifies something, and I think her going into that quote-unquote “Terminator” mode foreshadows so much. I think we’re going to keep figuring out exactly what that is and what’s going on. And, we’ve also now seen another Dolores, and the question is now if she’s talking to herself or if there’s another actual Dolores, which raises all kinds of new questions.

Could there be multiple versions of the same host?

Exactly. So many questions are being brought up in [episode] five, which we’re just going to continue to explore.

What was your experience shooting the scenes at the sex party in Pariah?