He rides in the night, unafraid of what lurks in the black. He knows every player by name, except for the few he hasn’t bothered to meet. Bullets bounce off him like gnats on a windshield. Bullets flow from him like a hornet’s nest unleashed. Think twice before you accept his gifts; in his hands, a peace offering could very well blow up in your face.

He is the Man in Black. He is… the most interesting man in Westworld.

Ed Harris certainly earned his place as the most fascinating figure on the new HBO drama four episodes into the run. The latest hour of the series, called “Dissonance Theory,” features the gunslinging gamer besting impossible odds all on his lonesome… at least as it appears to the outside observer. In truth, the Man in Black’s abilities, interest and role in the Westworld park are a whole lot more complicated than the sheer simple strength of one man. While he’s in pursuit of a maze of his own, Westworld viewers are racing to solve the riddle of the Man himself, a key figure in most of the show’s ongoing puzzles.

As we’re still working out the full picture, let’s take stock of what we know about the Man so far:

** The Man in Black owes origin to Yul Brynner’s Gunslinger from Michael Crichton’s original 1973 movie on which Westworld is based. They’re both clad in dark shades that represent their dark intents, they’re both forces of antagonism, they’re both played by excellent actors… but the comparisons mostly end there, especially as the film’s gunslinger is a machine, and the show’s gunslinger is a man (in black). As actor Jimmi Simpson, playing a Richard Benjamin surrogate of sorts, puts it: “Don’t expect it to end in any way like the movie.”

** So who’s the Man in Black of HBO’s Westworld? We don’t know him by name, not yet, so it’s Man in Black until further notice. The Man or MiB also seem acceptable as shorthand. The Gunslinger, if you wish — though the Man in Black also boasting “Gunslinger” as a nickname is sure to cause some cognitive dissonance for fans of The Dark Tower.

** While we don’t know about the Man’s name, we do know about his very particular set of skills — skills that name him a nightmare for hosts like Lawrence (Clifton Collins Jr). The Man is a phenomenal shot, able to take out targets from dozens of feet away. He has specialized weaponry, with bullets that can punch holes through a full foot of rock, and explosive cigars that come in handy when breaking bandits out of prison.

** Really, the Gunslinger is an expert gamer, a notion that showrunners Jonathan “Jonah” Nolan and Lisa Joy wanted to explore over the course of the series: “He’s like somebody who plays Grand Theft Auto all the time and can solve a thing in 30 minutes. He’s fantastic at this. He’s a pro.”

** There’s a reason he’s so good at this, too. The Man has been coming to Westworld for 30 years, which speaks not just to the park’s expansive history, but specifically the Man’s role in the place as well. It’s worth noting that in the premiere episode, a technician notes that Westworld hasn’t experienced a critical failure in about thirty years. Coincidence?

** The Man’s time in Westworld has paid off behind-the-scenes, too, as it looks like he has carte blanche. “That man gets whatever he wants,” security head Ashley Stubbs (Luke Hemsworth) declares during the show’s second episode, watching the Man’s actions from a faraway monitor. In episode four, Stubbs approves the Man’s request for a “pyrotechnic effect,” turning his cigars into bombs. The Man might be a great gamer, but he’s only as great as he is because he has help from the man behind the machines.

** For what it’s worth, through four episodes, only Ashley Stubbs has approved of the Man in Black’s actions in the park. Something to keep an eye on, for anyone suspicious that someone behind-the-scenes at Westworld is at least partly responsible for the hosts starting to glitch out. 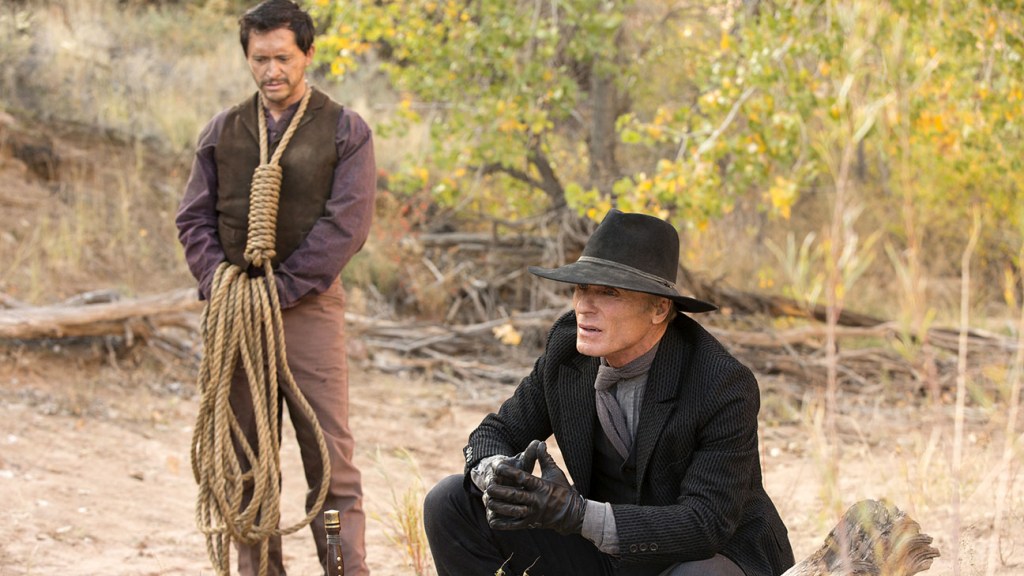 ** How can the Man afford to come to Westworld, year after year, with free reign over the park? Perhaps it’s because he’s a very wealthy man in the outside world. In episode four, a starstruck fan approaches the Man and talks about how his foundation saved his sister. Clearly, the Man is not only famous outside of the park, but apparently does some serious good through his work.

** That being said, do not bring up the Man’s life outside of Westworld, certainly not in the middle of a storyline. “This is my f—ing vacation,” the Man spits in response to his fan, promising to gut him wide open if he brings it up again. Whoever the Man is in the outside world, it’s very much not who he is while playing in Westworld.

** Again, it’s worth noting that we learn about the Man in Black’s connection to a foundation in the same episode that William (Jimmi Simpson) and Logan (Ben Barnes) argue about their seemingly high-powered but still enigmatic “family business.” Seems relevant for those tracking the “William in Black” theory.

** If the “William in Black” theory is news to you, it posits that William is a younger version of the Man in Black, with his story playing out long before the other stories on the show right now. If true, then the Man was once a peaceful fellow and a serious skeptic when it comes to the ways of Westworld — his cold view of the place only beginning to thaw after meeting Dolores. Consider this story “developing,” if not quite yet “breaking.”

'Westworld': Jimmi Simpson Weighs In on Man in Black Theories

** Back to the confirmed Man in Black. He knows pretty much everyone in Westworld. He’s had countless encounters with the likes of Dolores (Evan Rachel Wood) and Teddy (James Marsden), for instance. At one point, Maeve (Thandie Newton) glimpses visions of a past or alternate life where a violent Man in Black approaches. The Man has been palling around with lowlife Lawrence for as long as he can remember. If you’re a host in Westworld, chances are you’re on the Man’s radar.

** That said, the Man does not know everything about Westworld. He’s surprised to learn that Lawrence has a wife and child, for instance, and he meets an outlaw named Armistice (Ingrid Boslø Berdal) for the first time in episode four. There are still mysteries within mysteries, even after 30 years of coming to the park.

** It’s why the Man in Black is searching for a place he calls “The Maze,” which could be a literal maze, a euphemism for something else… lots of possibilities. For his part, the Man talks about wanting to find a “deeper level to this game,” and he’s literally hacking hosts — physically scalping them in some cases — in his relentless pursuit of this hidden depth.

** In episode four, the Man in Black somewhat clarifies why he wants to find the Maze, and what he hopes to get out of his situation: “A man named Arnold was the original settler of these parts. He created a world where you can do anything you want, but you can’t die. No matter how real this world seems it’s still just a game. But then Arnold broke his own rule. He died right here in the park, except I believe he had one story left to tell. A story with real stakes, real violence. You could say I’m here to honor his legacy.”

'Westworld': 5 Theories About the Enigmatic Arnold

** If you’ll recall, Arnold is the name of the man who co-founded Westworld alongside Robert Ford (Anthony Hopkins). He became enveloped in the idea of imbuing hosts with actual consciousness, and eventually, Arnold’s interests consumed him so much that he died in the park, his death ruled an accident. At least, that’s Ford’s version of events; there’s no telling how it aligns with reality. But for his part, the Man in Black knows Arnold by name, and has his own violent interpretation of Arnold’s legacy. Again, this speaks to the Man’s history here in the park.

** The Man in Black also smiles in recognition at the name “Wyatt,” the villain at the heart of Ford’s new narrative — someone who sounds a whole lot like an Arnold analogue.

** Here’s perhaps the most important bit of information of all: The Man in Black views Westworld as his home. He believes that he was born here, in a sense, and he promises Lawrence that “this time, I’m never going back.” Whatever his objectives are, whoever he really is, the one thing we know for sure about the Man in Black is that he’s deeply woven into the past, present and future of Westworld — bad news for hosts, and great news for viewers. 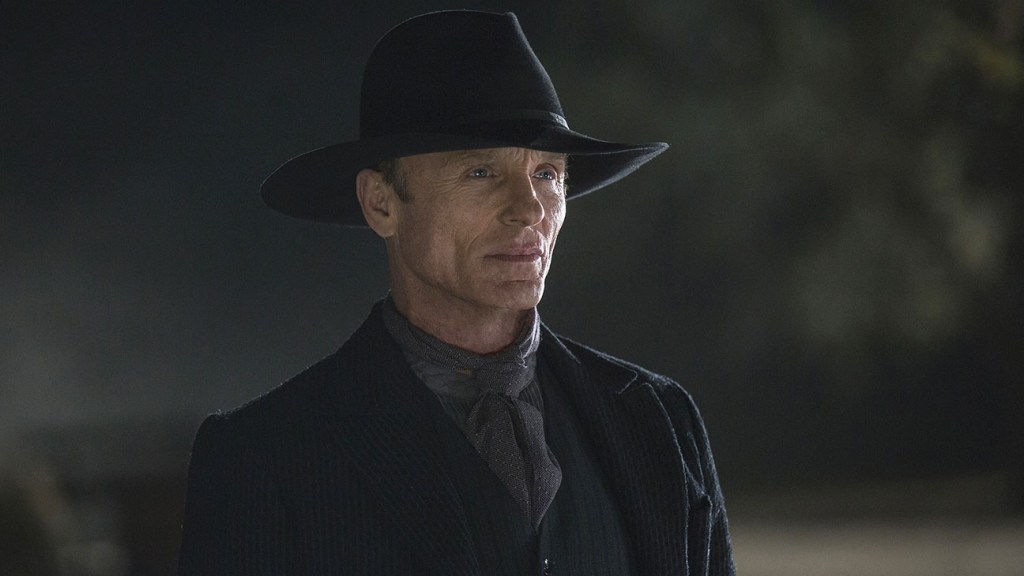 The CW to Expand to 7 Nights for First Time Ever