[Warning: This story contains spoilers for the season one finale of HBO’s Westworld.]

It was one of the most popular Westworld theories in fan circles from nearly the very first episode, and now, it’s confirmed: William (Jimmi Simpson) and the Man in Black (Ed Harris) are one and the same.

In the final episode of the season, called “The Bicameral Mind,” Dolores (Evan Rachel Wood) and the Man in Black reunite for the first time since their ugly rendezvous in the series premiere. Together in the thick of Escalante, the Man proceeds to tell Dolores exactly who he is: William, the same man she fell in love with years and years ago. He recounts his version of events: after Dolores went missing in the night, William searched far and wide for the missing woman of his dreams. He shot and killed his way across the land, and eventually rediscovered Dolores where he first found her in Sweetwater … except this time, Dolores didn’t remember him at all. Old Man William tells Dolores that the experience opened his eyes to Westworld’s possibilities, and convinced him to not only take over the Delos company, but also to buy a majority share in the park.

“I really ought to thank you. You really helped me find myself,” William tells Dolores. With that, Dolores proceeds to kick the ever-loving snot out of her former flame-turned-elderly outlaw, in what’s easily the season’s most satisfying beatdown, for so many reasons — not the least of which is that it comes at the end of the long road toward the “William in Black” reveal.

'Westworld' Finale Ends With a Bang, Sets Up Broader World for Season 2

Theories surrounding the connection between William and the Man in Black first emerged as early as the show’s second episode, featuring William’s debut. From his very first scenes all the way through the penultimate episode of the season, William’s destiny appeared to be on a collision course with the Man in Black. A few examples of the clues fans fixated on:

• A Sept. 30 tweet from HBO’s official Westworld account noted that “even logos deserve a deeper look.” Fans took that advice as soon as William’s first episode: when he arrives in the park, the Westworld logo is markedly different from the one seen in nearly every other instance. (A notable exception: the logo on the computers Bernard (Jeffrey Wright) wields in a long-since decommissioned sub-level back in episode six, “The Adversary.”) From there, fans latched onto the idea that Westworld was playing out across multiple points in time, with William at some point in the past, barreling toward his future as the Man in Black.

• Next, the surface details. There’s a notable physical resemblance between the two men: the stiffened lips, the piercing eyes, the low-toned voice, and so on. Alas, no accounting for the mole discrepancy, but it’s more hit than miss.

• Returning to the multiple time frame theory, which was further reinforced in episode nine, “The Well-Tempered Clavier,” when Logan (Ben Barnes) shows off a photo of his sister, aka William’s fiancé. It’s the same photo that triggers Peter Abernathy (Louis Herthum) back in the premiere, strongly suggesting the William story takes place in the past.

• Angela (Talulah Riley), the host who introduces William to the park, reappears in episode eight, “Trace Decay,” in the Man in Black time frame. The MiB recognizes the woman and remarks: “I would have thought they retired you.” It suggests a man who hasn’t seen this woman in a very long time — perhaps not since his first trip to the park almost 30 years earlier. 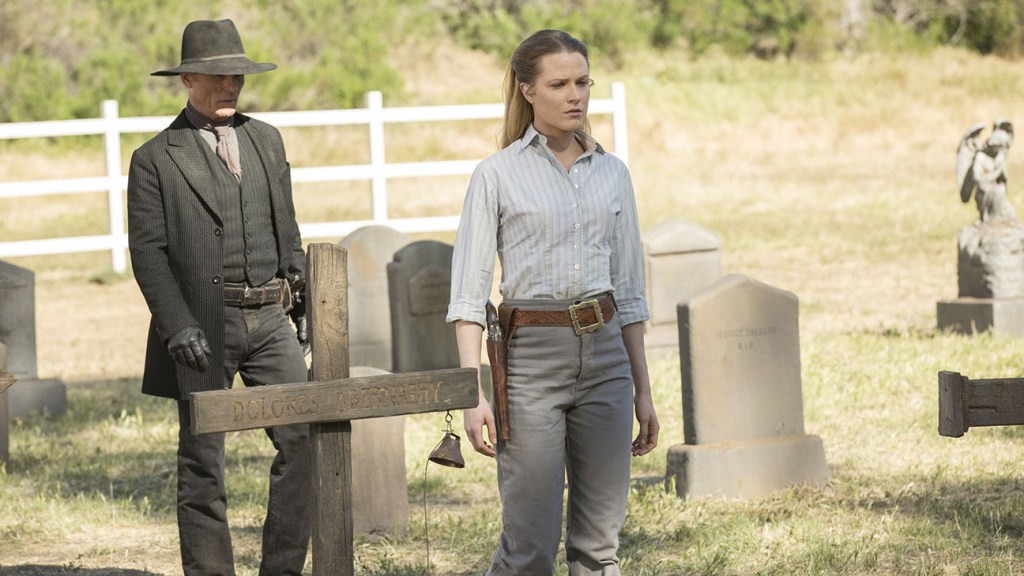 • William first meets Dolores when he picks up her can of food in the middle of Sweetwater. It’s eerily reminiscent of Dolores and the Man in Black’s second scene together in the pilot, and only more so when you view William as a young version of an old killer.

• In one preview for the season, William is seen holding the Man in Black’s same signature knife.

• In the fifth episode, the Man in Black kills traveling companion Lawrence (Clifton Collins Jr.) in a remote section of the park. Almost instantly, Lawrence reemerges in the William and Dolores story — yet another suggestion that William and MiB were the same person operating at different moments in time.

• Both William and the Man in Black separately express their views of the park as a “story,” to use their word.

• Over the course of the season, it’s revealed that the Man in Black is a high-powered philanthropist in the outside world, and even a member of the board that oversees the park. It’s also revealed that William works for a company that’s considering buying a controlling share of Westworld. Logan’s family owns the company, and William is engaged to marry Logan’s sister, opening up a path for William to one day earn a position of tremendous power — the exact kind of power wielded by the Man in Black.

• Returning to William’s first moments in the park, there’s a beat where he considers taking a black hat before he settles on a white one, foreshadowing the journey of a good man on his way toward darkness. Indeed, over the course of the season, William’s white attire becomes bloodied and muddied, a physical transformation from “White Hat” to “Black Hat.” He eventually makes the transformation literal in his final scenes as young William, putting the Man in Black’s hat upon his head.

The list goes on, but those are some of the warning signs about the William-in-Black theory that were signaled over the course of the season. It’s a similar story for the Bernard-is-a-host and Bernard-is-Arnold twists, which both featured plenty of signposts along the way toward the reveals. In other words, if you’re eager for Westworld to answer its most pressing questions, don’t wait around. Search the episodes that already exist: the clues are there, and you just might arrive at the finish line before the show.

What did you think of the finale’s Man in Black reveal? Sound off in the comments below, and follow along with THR’s Westworld coverage for more news, interviews and theories.