Within Shogun World, Musashi is a force of nature, the former captain of the shogun’s guard, a current “cop-killing” blade for hire and an apparent Hector Escaton (Rodrigo Santoro) doppelganger.

Outside of the park — and outside of Westworld proper — the actor responsible for bringing Musashi to life is similarly prolific and impressive: Hiroyuki Sanada, recognizable across the world for his roles in a range of films and TV shows. Among the highlights: the baseball-wielding Dogen in the final season of Lost; Shingen Yashida in The Wolverine, a role that required a climactic sword battle against Hugh Jackman’s claw-bearing mutant; and Ujio in The Last Samurai, the warrior who inflicts numerous beatdowns upon the outsider played by Tom Cruise, until the two become unexpected allies.

These are but a few of the dozens of roles Sanada has played over the course of his lifelong career. That’s not hyperbole, either: Sanada has been acting since he was a child, where he trained at the legendary Sonny Chiba’s Japan Action Club. Decades on, Sanada is still fighting tooth and nail onscreen, most recently as Musashi in Westworld, teaming with Thandie Newton’s Maeve in order to protect the dancer Akane (Rinko Kikuchi). By the end of his debut episode, “Akane No Mai,” Musashi — along with Hector, the host with whom he shares similar backstories and character traits — has been beaten and captured by the shogun’s men. His next steps are a question mark, which is fitting, considering Sanada’s Westworld journey began with some questions of his own.

Here’s what Sanada tells The Hollywood Reporter about signing on for the HBO drama, his initial conversations with creators Jonathan Nolan and Lisa Joy, stepping into Shogun World for the first time, helping Thandie Newton with her Japanese dialogue and much more.

How did you come to join the Westworld cast?

I was a big fan of season one. I watched everything. I was a big fan of Thandie, and I had worked with Anthony [Hopkins in The City of Your Final Destination] previously. At the end of the season, I saw there were samurai warriors in the show. I saw the initials: “SW.” So I was wondering, “Is that ‘Samurai World’? Is there a possibility for a Japanese role in season two?” I was really wondering and crossing my fingers. When I got the offer for the role, I was so excited. It was a dream come true. I talked with Jonathan and the writers on the phone about Shogun World and my role. I felt their respect for Japanese culture, including the Kurosawa movies. It was going to be an homage, they said. And I thought, “Oh, my gosh. I should be there, for sure.” (Laughs.) Immediately, I said yes.

What was it about Westworld that spoke to you when you were watching the first season?

The great ideas. Immediately, I went and watched the original movie from the ’70s with Yul Brenner. They created a great new version with a great crew and cast, with all of the new … technology. I was shocked by it. It was such a high level with such an imagination.

You’re playing Musashi, a ronin in Shogun World. Who is this character to you?

He served the shogun before. Now, he’s a masterless samurai — a ronin. He’s a sword master. He has a very interesting relationship with one of the most famous [hosts] in Westworld: Hector. They’re like mirror images. It was really interesting to me to create my character, not only to copy [Hector], but also finding the best ways to match different parts. We fight each other at the beginning, and then we’ll go somewhere during the show. That was very interesting for me.

'Westworld': Shogun World and the Secret of the Witch

What kinds of conversations did you have with Rodrigo, knowing that Musashi and Hector are reflective of one another?

We had great conversations on set, creating chemistry with each other. We would call each other “buddy.” (Laughs.) I rewatched season one before I shot the entrance scene for the teahouse. We tried to perfectly match season one, when Hector killed the sheriff and took the host and the weapon. I’ve done the same thing. I carefully rewatched season one and re-created that scene. Happily, they put the same music into the show [with another cover of “Paint It Black,” composed by Ramin Djawadi]. I really enjoyed the shoot, both as an actor, and also as a big fan of season one. I felt it was going to be a big gift to the fans of season one. It’s a dynamic, great service to the audience. I was so happy to be there.

What was it like walking onto the Shogun World sets for the first time?

I was surprised. They researched [the Edo period] very well, and they created this great village, including the great teahouse. Inside, it was very authentic. They had the floor with the tatami mats, and stairs going all the way up to the second floor.… It was amazing and beautiful, with that beautiful sakura tree, the cherry blossom. I’m so glad I could do that fight scene under the sakura tree. I was almost like, “Where am I? Am I in Japan right now?” (Laughs.) They did a really great job, HBO. 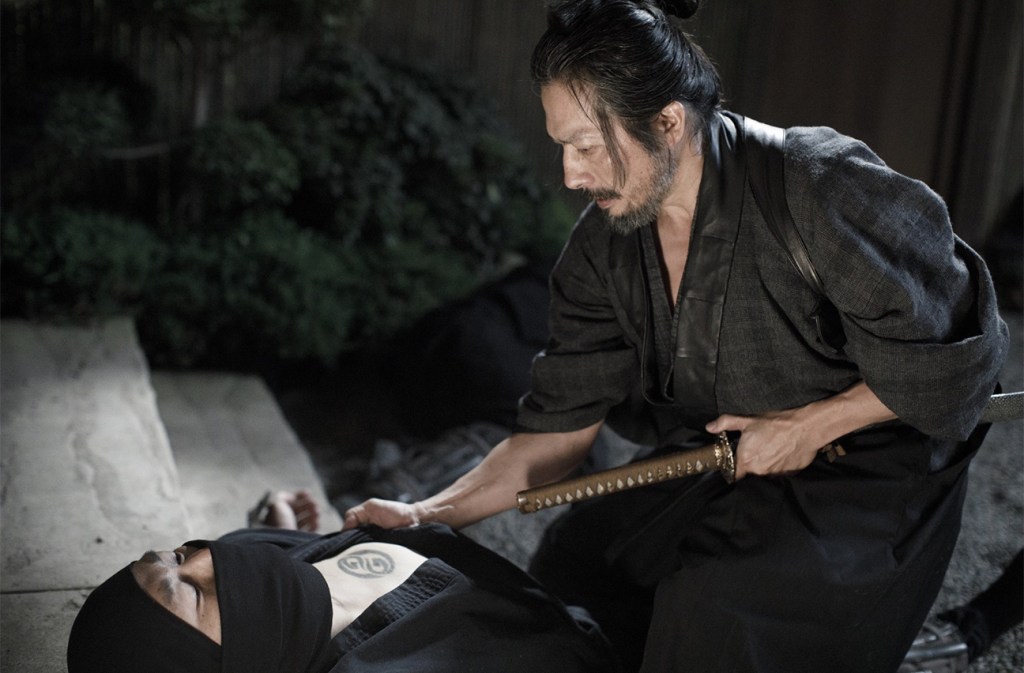 Can you walk me through shooting that fight scene you mentioned against the shogun’s assassins under the tree?

All the fight scenes, we created with stunt coordinators and choreographers, and I put some ideas out there, too, because I have some experience with samurai movies. We tried to create an authentic and entertaining [fight] as a samurai. The fight should give the meaning of “showtime” in the park to the guests. We tried to mix between a real fight and showtime for the guests — and also for the audience on TV. We tried to make the best balance between the two.

In speaking with Thandie Newton, she mentioned you were instrumental with helping her on her Japanese dialogue…

Yeah, I was a big fan of Thandie’s for a long time. I was so excited. My role [involved] working with Thandie a lot. Mainly, I worked with Thandie. Musashi and Maeve have a great communication in the show. I met her before the show a few times, so it was easy to have communication. Then she had the Japanese dialogue on the show. I know it’s hard for someone who has never learned Japanese before, and then having to talk a lot in this language. On set, every day, I helped her with learning Japanese. Every take and every rehearsal, I would take notes and give them to her. She has a great talent to speak foreign languages. She has a great ear. She sometimes sounds like a native. I was surprised! (Laughs.) Sometimes it was like, “Oh, my gosh, that sounds native.” Day by day, she was getting better and better. Even when I wouldn’t [be] shooting, I’d go to the sets to support her Japanese dialogue, to prompt her and repeat and repeat until it sounded native. Finally, she sounded great. Clear and matched for the character. I respect her so much. Before I worked with her, I was a fan of her. After the job, I respected her. Great talent, with a great effort.

You have had your hands full with so many different projects in the last few years. Is it important to you that you’re always busy and always working on a new role?

Yeah, luckily, I’ve been able to survive in the world market. I could never have imagined that growing up in Japan, before I moved to the U.S. 12 years ago. Luckily, I’ve worked with great directors and actors, including the big franchise movies and the great independent dramas. It’s been like a dream. I started as a child actor, watching Western movies, and started thinking about working with those great creators in the future in the world market. Little by little, dreams came true. I’ve survived by working with great crews and casts. I always think [about this] when I choose a project: “Is this a great role for a Japanese-born actor or not?” That was my judge, always. Sometimes I couldn’t take a role because of a culture thing or a misunderstanding in the script. Every time I talk with creators or director about the script and the role, before I take the role, that’s very important to me as a Japanese-born actor. Being famous or making money isn’t important for me. Taking a Japanese role, I wonder if it’s OK for our future or not. That’s the line for me. Of course, going back to Japan to make money? That’s easy. But I want to create the future for me, of course, but also for the next generation. Choosing the project is the most important and difficult job for me. Playing on set? It’s just a hobby.

Is there a type of character or project you haven’t had the chance to work on yet that you’re eager to try?

I’ve done almost every genre in Japan. But in the U.S. and the world market? I’ve never done any comedy yet, or a love story yet, or a musical yet…

So you need to book a musical romantic comedy next.

All in one? (Laughs.) Hopefully some writer or producer is reading this and asks me to do that!

You mentioned how you dreamed about starring in these kinds of movies when you were a kid. What would that version of yourself think about all of the work you’ve done in your career?

(Pauses.) Maybe he would say, “I don’t believe that. I can’t believe that.” But I had a hope when I was a child actor: “If I can continue acting, in the future, I’d love to do everything by myself and work with the top class of filmmakers in the world.” That was the hope when I was 10 to 13. But I didn’t know what was going to happen. That’s why I could train hard every day. But if I knew I could do it? Maybe I would have cheated. (Laughs.) “Oh, I can do it? I don’t need to train!” Sometimes since we can’t see the future, we try harder and harder.

That’s how you make the future!

What are your thoughts on Sanada’s work on Westworld thus far? Sound off in the comments below and keep checking THR.com/Westworld for more coverage.